The JV of Alibaba and SAIC, Banma is among the first batch of companies that are trying to build an operating system for the Internet of Vehicles network. ► Established by SAIC and Alibaba, Banma provides integrated solutions to Intelligent and Connected Vehicles based on AliOS.

► Banma adheres to an open platform and set to gradually perform as the base of the Internet of Vehicles (IoV).

On May 11, Banma Network Technology completed a strategic reorganization with AliOS, a subsidiary of Alibaba that focuses on smart operating systems for devices like TVs and Cars. Four P9 level talents from Alibaba, including AI laboratory CMO Cheng Li (成力) and the product leader of Cainiao Logistics ET Lab, Huang Youyong (黄佑勇), have joined Banma.

Banma Network Technology, a company providing Intelligent and Connected Vehicle total solutions to the whole automotive industry, was established by Alibaba Group and SAIC Motors on March 12, 2015. Banma is connected to the Ali ecosystem via mini-programs equipped in the vehicle.

For instance, logging into Alipay, the driver can use Taobao and travel agent Fliggy and realize payments on a highway, at gas stations and parking lots. In addition, drivers can check the condition of the car and communicate with it. It can also allow an Over-the-Air (OTA) upgrade.

It aims to make breakthroughs in two key directions. One is customized for OEM, and the other is the real-name system. Banma’s positioning is to be a third-party technology supplier that empowers car manufacturers. Only the independent development of an underlying operating system can provide such capabilities. Banma CEO Hao Fei (郝飞) said that "Banma's role today is to act as an intermediate bridge between OEMs and other ecological platform accounts."

The establishment of Banma has also had a positive impact on Ali and SAIC. For the car company, cars equipped with the VENUS system, which was launched by Banma, are more attractive to customers. Apart from that, it is an opportunity for the transformation of SAIC, a traditional car company.

For Ali, to some degree, Banma can increase traffic and strengthen customer stickiness. Moreover, Ali doesn’t want to be considered as an e-commerce platform only and has been trying to expand its business scope by investing in high-tech startups including Megvii, Cambricon and Transinfo. Banma is also one high tech constituent of Ali, becoming one part of its layout in vehicle and IoV markets.

Labeled 'Ali,' the company continues to open wider It completed the first round of financing of over CNY 1.6 billion (in Chinese) in September 2018, led by SDIC, and some new investors joined in, such as YF Capital. According to Chinese tech media TMTPost, (conversation in Chinese) CEO Zheng Fei said that "among more than 100 ecological partners of Banma, companies in Ali Ecology only account for 30%, and the remaining are third-party Internet and vehicle companies. More partners will be introduced in the future."

Being open to more companies is necessary for Banma. To work as a qualified 'Android' -level system in the car, it should adapt to different vehicle models of various brands and needs to broaden the scope of its application ecology. If so, it will be able to attract more car users and form a virtuous circle.

As the first step in opening up, at the 2018 Yunqi Conference, the Banma Network announced the launch of a personalized open platform for vehicles (T.O.P) to meet the individual needs of different car manufacturers.

To further prove the sincerity of the company's desire to create an empowering platform, in July 2018 Hao Fei announced that the company has nine core capabilities that are fully open to the public, covering interaction, assisted driving, vision and IoT platform.

In November 2018, Banma teamed up with the five major vehicle brands to organize an IoV 'Carnival Month' event for Banma users. During that period, the cumulative number of transactions reached over one million; 95% of Banma owners participated, and the number of payments without passwords is equivalent to the sum of the past 6 months.

Relying on SAIC and Ali, Banma was the first to be embedded in a car, taking the first-mover advantage. Roewe RX5, the world's first Internet Car with an AliOS-based Banma System, was available on July 6, 2016. On July 4, 2018, Baidu's autonomous car research unit Apollo unveiled its IoV systematic solutions -- DouerOS. Later in the same year, Tencent launched the IoV platform -- TAI. In addition, Huawei has joined with a batch of 18 car companies to establish a '5G automotive ecosystem' this year. As more and more Internet giants deploy IoV, industry competition will become increasingly fierce. 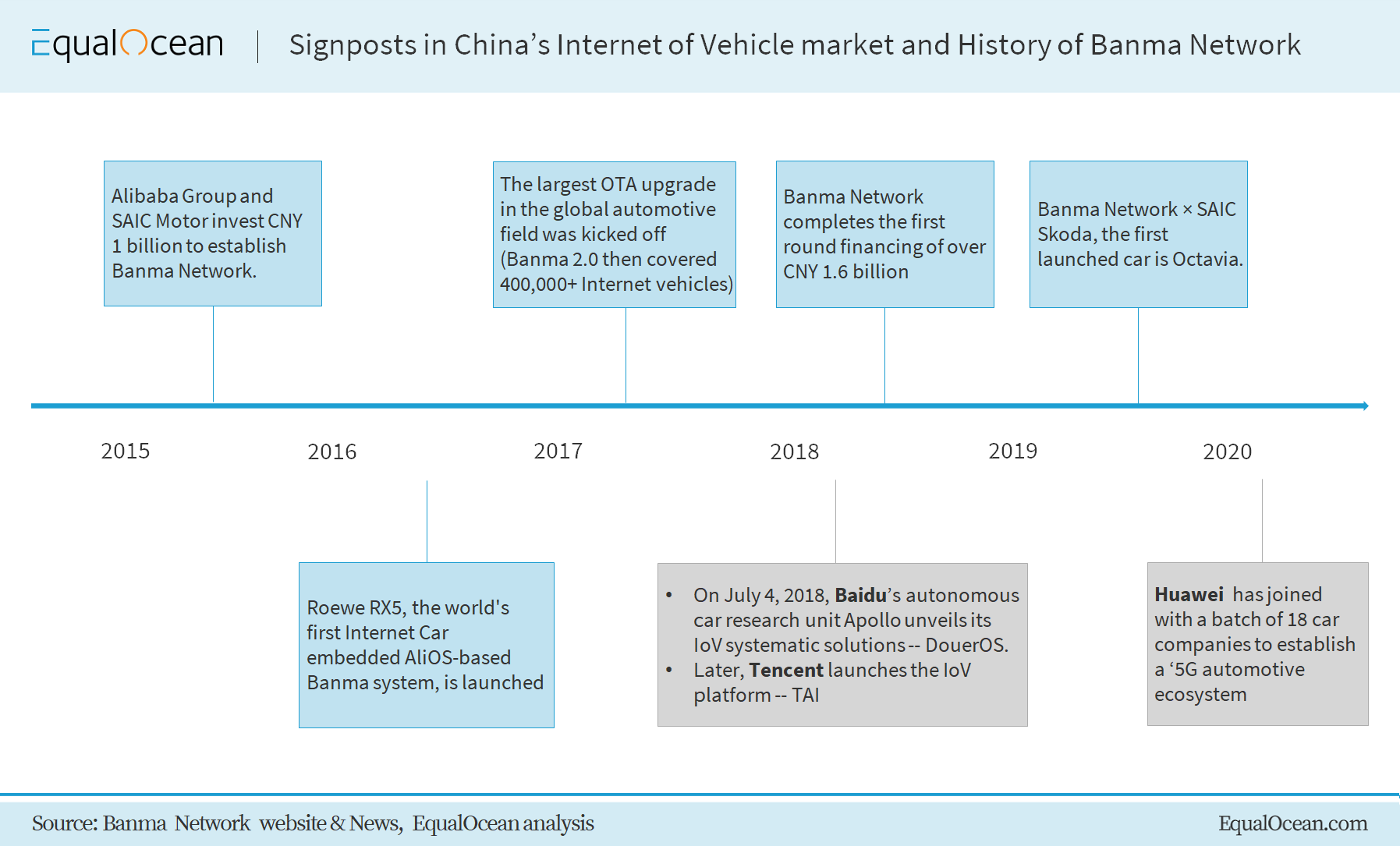 "If the intelligence of China's Intelligent Connected Vehicles (ICV) is still built on the basis of foreign operating systems, this is tantamount to establishing the industrial building of ICVs on top of quicksand," Hao Fei said.

It has also joined hands with Qualcomm, MediaTek, Intel, NXP and Texas Instruments to announce the establishment of an intelligent connected car "core" alliance – this will jointly use the operating system as the center of the software and hardware combination, establishing a fertile chip ecology and providing the industry with a more cost-effective, optimized and efficient ICV system with which to grow.