According to the latest quarterly index review, a Wuxi-based CRO company will be incorporated into the FTSE China A 50 Share Index.  It has been considered a top holding by many MSCI China indexes for some time. ► WuXi AppTec will be included in FTSE Russel’s China share index, another signal showing its investability.
► As an ‘A+H’ China share, WuXi AppTec has now obtained fast progress from synergies out of diverse R&D pipelines and inorganic growth.

The Chinese healthcare industry has come into a mature stage. It includes now a considerable number of pharmaceutical companies with cutting-edge tech and world-class reputations. WuXi AppTec is undoubtedly in one or more of these categories. As a flagship in the CRO business, it has been included in both ‘MSCI China All Shares Index’ and ‘China–An Onshore Index’ and will be added to FTSE Russell China’s equity index constituents.

On the other hand, the FTSE China 50 Index, the different tradeable index in FTSE Russell's China portfolios, also indicates a preference in the Chinese healthcare industry, from healthcare Internet to pharmaceuticals.

Unlike the previous index, this index uniquely captures Chinese stock listed on H- and P-share and Red Chip markets. It will include Alibaba (9988:HKSE), Ali Health (0241:HKSE) and Hansoh Pharmaceutical (3692:HKSE) while deleting Shenzhou International (2313:HKSE), New China Life Insurance (1336:HKSE) and China Communications Construction (1800:HKSE). All these changes will be effective on June 22, 2020.

As the major economies are struggling amid the hovering pandemic, worldwide acute market watchers cannot miss the inevitable trend among China-tagged entities. Prestigious index providers such as MSCI Inc. (MSCI:NYSE) and FTSE Russell have made several great leaps and pioneered the Chinese A-share market. According to its timeline, the latter index provider plans to ‘add 25% of the investable market cap of eligible large, mid, and small-cap China A-Shares in Phase 1’.

A fundamental reorientation of the Chinese A-share market is happening and a profound pushing force behind this comes from all these A-share companies – for example, WuXi AppTec (603259:SH; 2359:HKSE).

A heavyweight in All China equity indexes

On the Chinese healthcare industry stage, WuXi AppTec is one of the top ten highlights that enjoy sufficient exposure to outbound investors interested in the Chinese public market. MSCI has included WuXi AppTec‘s performance on A-shares in its All China Health Care 10/40 Index since January 31, 2018, and in China Health Care 10/50 Index since December 7 in the same year.

Not only MSCI, FTSE Russell, but some other Chinese healthcare-specific funds also show their appreciation. The Loncar China BioPharma Index focuses on innovation in the Chinese biopharma sector and screens companies from the universe of Nasdaq- or Hong Kong Stock Exchange-listed names. Its prospectus shows that the three most significant components of the Index were CSPC Pharmaceutical (1093:HKSE), WuXi AppTec (2359:HKSE) and China Medical System (867:HKSE) at a percentage of 5.85%, 5.46% and 4.735 respectively as of November 30, 2019. 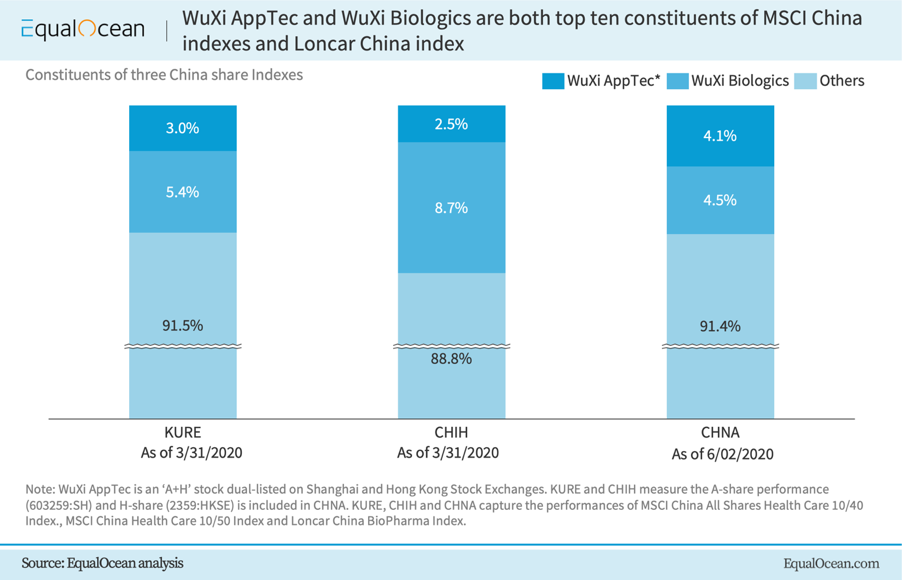 Not only do we find this ‘A+H’ dual-listed biopharmaceutical,  but WuXi Biologics Cayman Inc (2269:HKSE), the twin company of WuXi AppTec, is also a well-performing constituent covered by these three indexes. Indeed, compared to other competitors, WuXi AppTec takes much more weight in the index constituents. However, it is only one representation of the whole of the WuXi-school companies.

There is more to the story.

Founded in December 2000, WuXi AppTech is the first-ever local CRO in China’s pharmaceutical business history to be established by Chinese founders and supported by domestic capital.

What’s more, it was also the first Chinese CRO listed on the New York Stock Exchange, as early as in 2007. But soon later, this new public entrant suffered a disastrous price fall caused by worldwide systematic risk — the 2008 financial crisis happened and it ended up being delisted from the US board.

But these changes were just about the financing policies of this corporation. What is more noticeable is their business plan that aims to provide pre-market R&D outsourcing services throughout innovative pharmaceuticals in a holistic coverage process, from pre-clinical to Phase III.

In most cases, an innovative drug experiences four stages before entering the distribution stage: illness identification and initial research, pre-clinical research and development, clinical research, administration approval and commercialization. It is substantially a continuous filtering process to select the best pharmaceutical solution out of the initial 5,000 – 10,000 compound candidates. 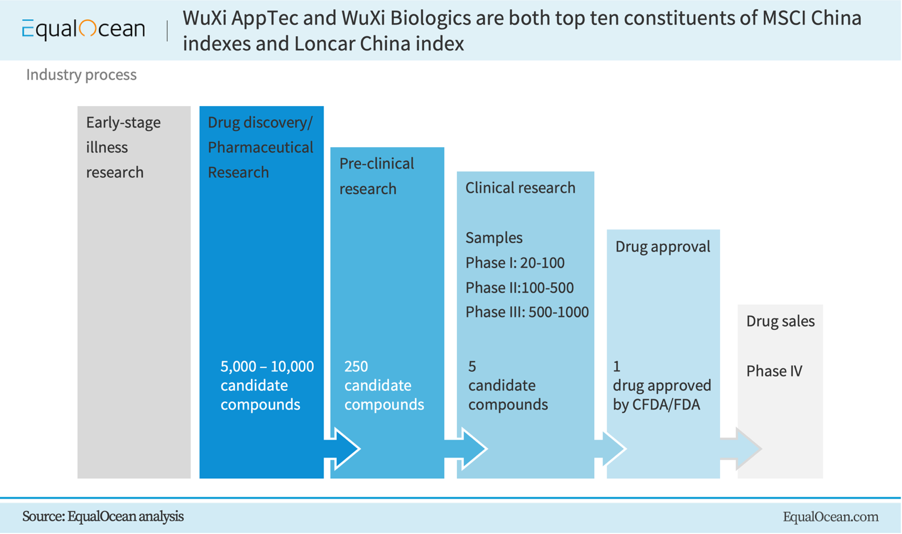 CRO usually takes care of the first two processes – pre-clinical research and clinical R&D – to narrow down the test scale from around 250 compounds to five or so. This considerable workload has to be assigned to one entity, partly due to business confidentiality, and partly due to the intellectual synergy of shared resources for countless experiments and similar pipelines.

According to Warrant Buffet’s Moat Theory, the first mover should continuously deepen and widen its moat. So did Wuxi AppTec with its history framing its business development. At the inception, it focused on innovating chemical drug research; later on, it extended to the living area in 2004-2005. In 2008, this newly listed drug developer acquired another US-based CRO called AppTec, gradually expanding its research coverage from small molecules studies to macromolecules and related production bases.

After privatization from the NYSE, it split the all-in-one CRO business services into three entities to diversify the risk to the fullest extent. Born in 2004 as a workshop lab in Wuxi AppTec to provide cell lines incubation and protein analysis, WuXi Biologics has become an open-platform biopharma Contract Development and Manufacturing Organization (CDMO) in the particular area of macromolecules.

On the other hand, the micromolecular business was separated into a CRO and a CDMO, the current WuXi AppTec (603259:SH) and WuXi STA Pharmaceutical (previously 832159:NEEQ, delisted in April 2019).

Last but not least, this pharma giant has been getting more digitized since it acquired NextCODE Health, a tier-one genetic analysis and bio information Icelandic company. Listed on the 2019 Hurun Global Unicorn list, WuXi NextCODE received USD 2mn in Series C led by the Irish Strategy Investment Fund to implement a whole-genome sequencing project for up to half a million Irish citizens. 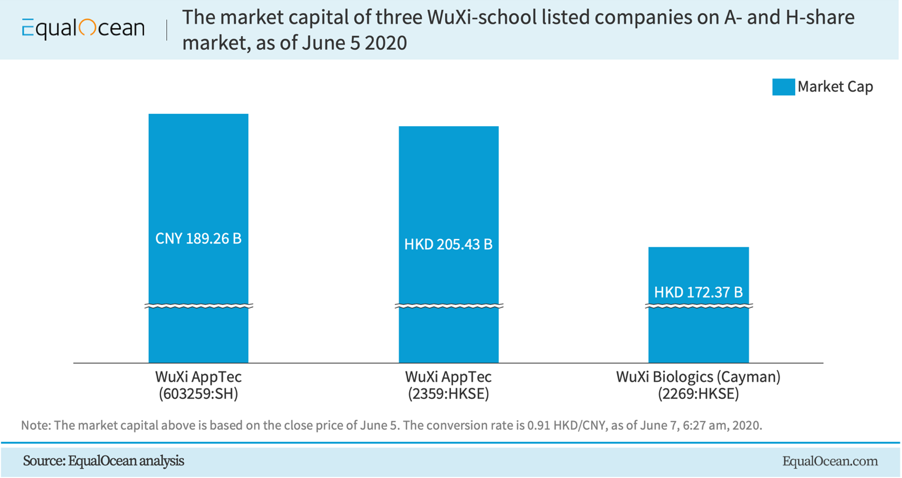 After seeing the information cliffs among pharmaceutical manufacturing, academics and research in 1999, Dr. Lee Ge (李革),  the founder of Wuxi AppTec, started the venture with a vision to make it easy to manufacture medical drugs everywhere. Now, this contract-based open-access platform has established an R&D empire, regarded as the ‘Alibaba’ in the pharmaceutical industry.

Its growth path shows inorganic growth spurts. It also adopted a post-deal strategy similar to the tech giant Alibaba (9988:HKSE) and has been practicing it for years. Aim for the most cutting-edge technical targets worldwide, equip them with operation, businesses and management resources, then transform them into subsidiary business units.

The Matthew Effect is quite evident in this industry – the rich get richer and the poor get poorer.

It is widely acknowledged that developing new drugs is tough – an average of 0.1% success rate to commerce stage after several rounds of tests. Not to mention the massive investment, long return cycle and high failure rate in the pre-clinical stage. So the value to exploit out of this business lies in a simple economic concept: scale effects.

Pharmaceutical companies are always faced with internal challenges in developing new drugs, including long cycles, increasing failure rates and raising costs. And there are also external pressures from market competition, patent expiration and administrative formalities. To maximize the return of developing innovative drugs under practical restrictions, this is the area where CRO/CDMO can enter.

What CROs and CDMOS do is to provide dedicated R&D services for all pharmaceuticals. The greatest value is the synergies out of the economic scale, since they cover hundreds or thousands of pipelines at the same time, to save the costs for studies.

In China, outsourcing of pharmaceutical R&D is a young industry (since 1996) but  has been fast growing. One fundamental reason comes from the increasing number of medical talents and improved medical facilities. Many Big Pharmas have chosen the Chinese alternative, instead of their expensive domestic labs, to save on R&D budgets. 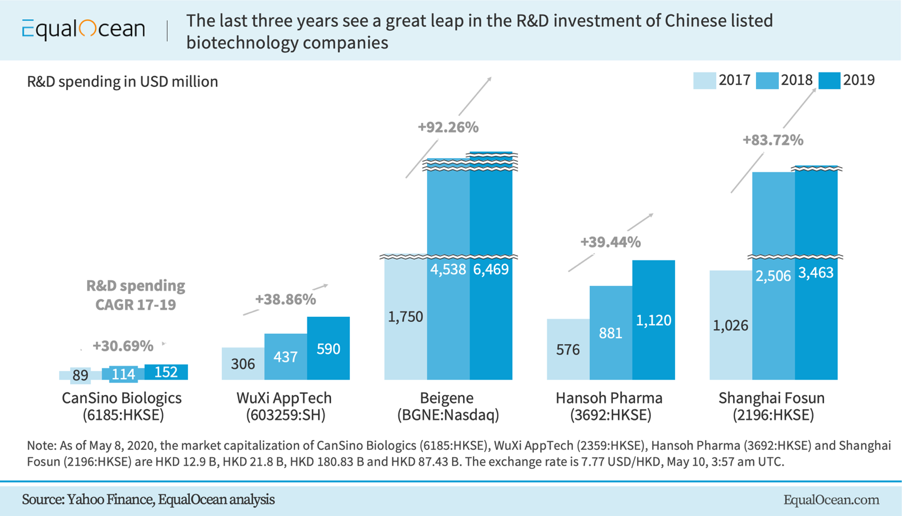 A standard methodology to calculate the market size of CRO is to multiply the total R&D spending of the industry. The CRO concentration  ratio indicates how many pharmaceutical companies use outsourcing services.

The last few years saw a soaring amount of R&D spending in China. A key accelerator is a series of more innovation-driven policies limiting production and distribution of low-quality medicines, from the 2015 restriction on adjuvant drugs to the consistency assessments of imitations and centralized procurement of drugs in 2018. These introductions have pushed pharmaceutical players to develop their core competencies by investing in R&D. 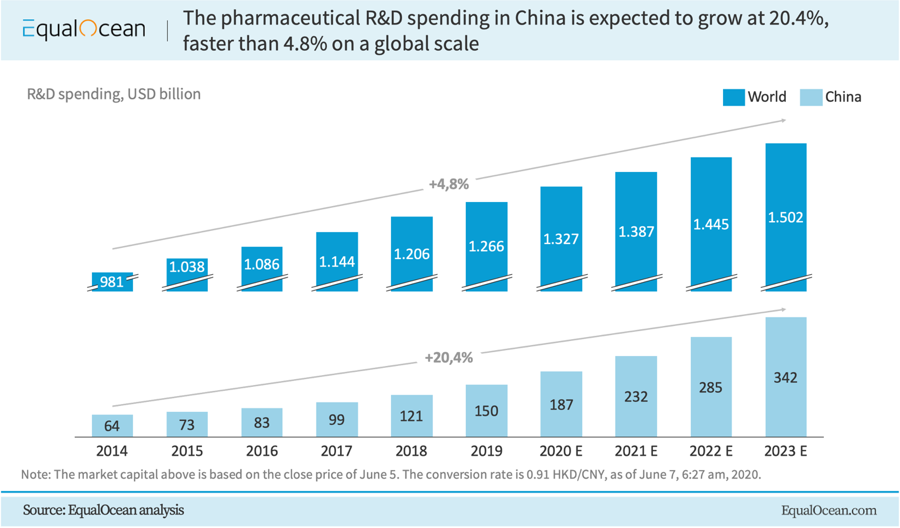 On the other hand, Chinese pharmaceutical companies are in an impasse of low ROI (Return on Investment) when innovating new drugs themselves. When the first one leverages the outsourcing, the others follow suit, making for a zero-sum chasing game.

In typical cases, the CRO can shorten the R&D pipeline duration by 20%-30% and the cost of researchers by 20%-30%. Typically, human cost accounts for over one-third of the total R&D project expenses. Mathematically, the decision to outsource the R&D process can create a direct economic value in an improved ROI by 7.14% – 11.11%, with the same return.

The launch of the Marketing Authorization Holder (MAH) in 2015 was the shock that arrived to revolutionize the CRO industry. Issued by China Food and Drug Administration, the policy calls on the separation of ownership and production of the products, allowing CROs to cooperate with Contract Manufacturing Organizations (CMO) to provide a 'one-stop' service – also a signal of inorganic growth.

Indeed, the demand for outsourcing R&D has formed a tech-driven industry growing at high speed. But this general trend does not mean all insiders are obtaining equal advantages. In the R&D outsourcing industries, the Matthew Effect will be more prominent. The first giant will always merge those small- and medium-sized research institutes with strong expertise in a particular field and enrich its comprehensive service capabilities. 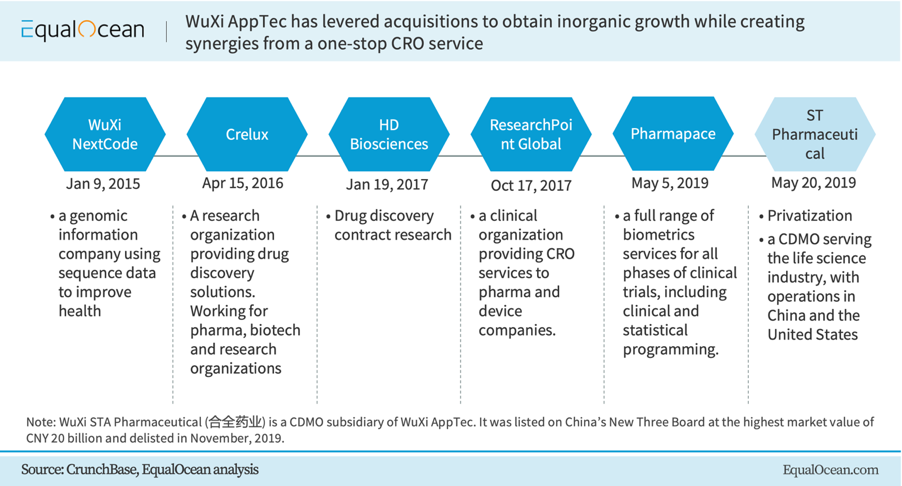 Now, WuXi AppTec, together with its CDMO subsidiary WuXi STA Pharmaceutical, is the only CRO that covers complete R&D outsourcing in small molecules medicines. Meanwhile, many other competitors are showing up and joining this fierce outsourcing arena from different angles, such as TigerMed (300347:SZ), Pharmaron (300759:SZ), Asymchem (002821:SZ) and countless SME CROs.

WuXi AppTec has taken a path of ‘large and complete’ but if it can keep every pipeline ‘small and beautiful’ in terms of R&D efficiency? See an in-depth comparison of the ‘Big Four’ of China’s CROs.