In this race of pharmaceutical R&D outsourcing segment, WuXi AppTec, Pharmaron, Tigermed and Asychem are some of the major names – but which has a truly winning side? 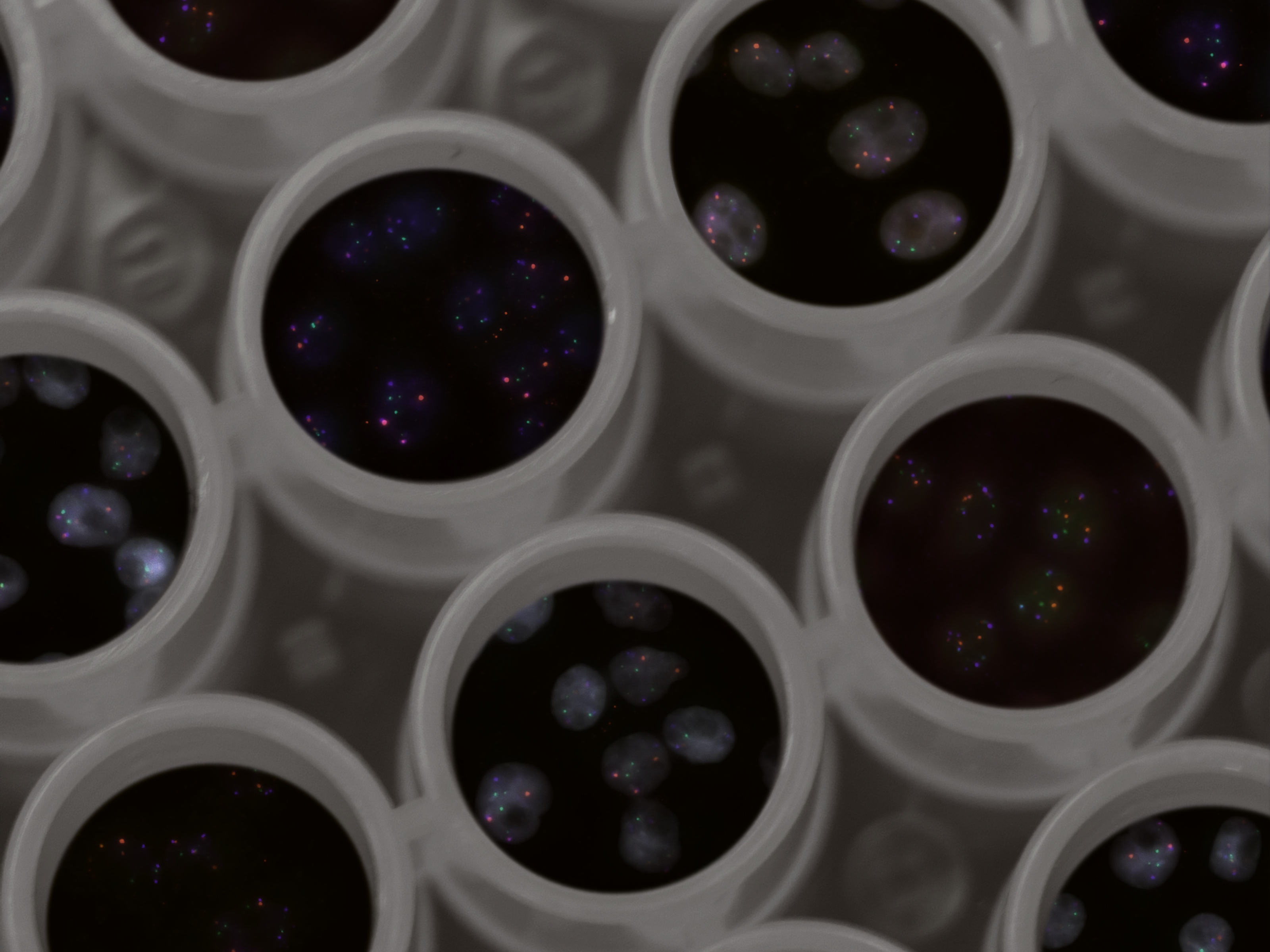 ► In China’s CRO industry, Tigermed is considered as the flagship player with a focus in clinical stages.

► The R&D efficiency is important to all these research-driven companies. There are advantages both from coming synergies due to wide coverage and from precision in a focus.

One major engine comes from the Chinese government’s healthcare reform. The 2019 ‘centralized procurement’ policy has largely squeezed out the gross margin of the imitation pharmaceutical companies, pushing them to further accelerate innovation.

WuXi AppTec (2359:HKSE), Pharmaron (300759:SZ), Tigermed (300347:SH) and Asychem (002821:SZ), commonly known as the ‘Big Four’ among Chinese listed CROs, are usually mentioned in comparison with each other. They are all contract research organizations, or pharmaceutical R&D service providers, in the study of small molecule drugs (chemical drugs). But they anchor at different stages of the pre-market process, exerting various resources and advantages to build up their moats and consume this expanding market. 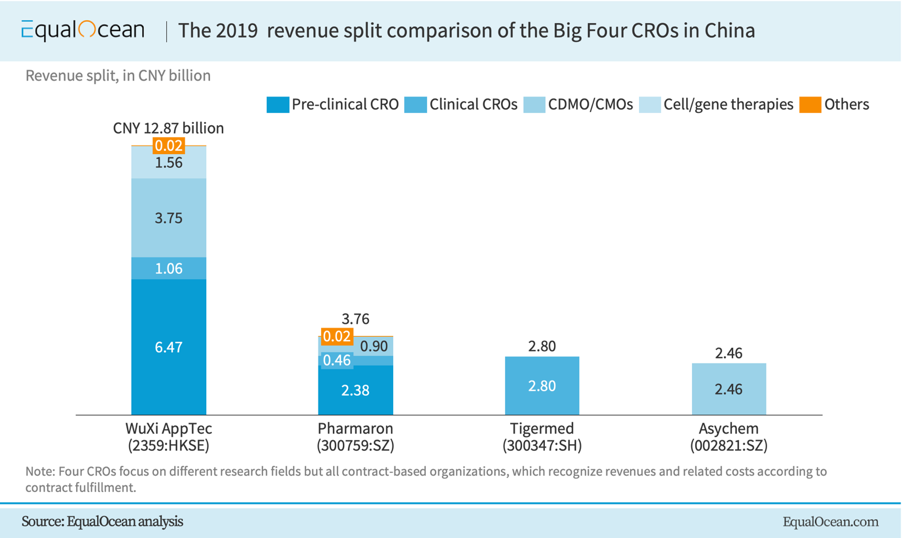 Investability rooted in the growing trend

Value investors care for the business and industry. A fast-growing sector is more attractive than mature cash-cow markets for new entrant investors, since a growing company gives higher returns, including time value and growth. The current CRO industry in China is showing a dynamic vitality based on two core factors:

It is a high probability event for pharmaceutical companies, as the marginal return on investment (ROI) in developing innovative drugs is decreasing, considering the increasing cost of advanced researchers and the difficulty in discovering new targets.

In China’s pharmaceutical ecology, companies are accelerating their process of developing new drugs, as they foresee an ample business space for R&D outsourcing services – CROs/CDMOs.

Several flagship CROs are emerging at this growth stage, and the whole segment is in a high competition status. According to Pharmacube, the four-firm concentration rate is around 30%, indicating a more focused tendency in the market. Besides, the Big Four CROs have shown a speedy growth in revenue during the last few years, with a robust drive visible in the tier-one players. 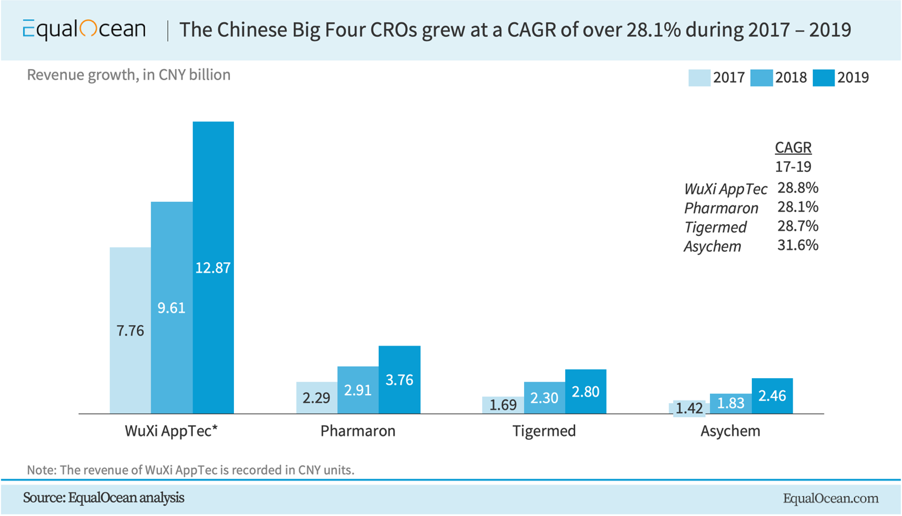 Along with the pre-market process of chemical drugs, Tigermed focuses on clinical trials (Phase I to Phase IV) and Asychem on commercialization. Pharmaron is extending its touch into the Phase I clinical trial and the clinical manufacturing service. WuXi AppTec, together with its subsidiary CDMO STA Pharmaceutical, provides an end-to-end coverage, including the research of pre-clinical and clinical stages, manufacturing and commercialization.

In the case of CRO companies, they recognize revenue when ‘a performance obligation is satisfied’ – i.e. the R&D service is completed according to IFRS 15. Its revenue is recorded proportionally as costs are incurred. 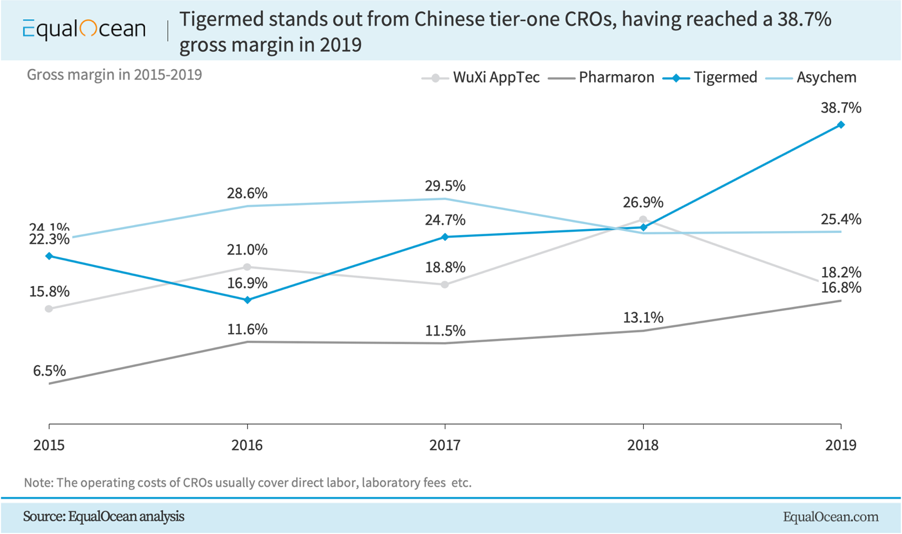 From the perspective of revenue in 2019,  WuXi AppTec outperformed the other three, with the highest income – of CNY 12.87 billion. As the only one-stop pre-market R&D outsourcing service provider, WuXi AppTec also takes a stronghold in the field of pre-clinical CRO and CDMO, at a revenue of CNY 6.47 billion and CNY 3.75 billion, compared to Pharmaron’s  CNY 2.38 billion and Asychem’s CNY 2.46.

However, Tigermed shows a more robust capability in the clinical CRO area, with a  2019 revenue of CNY 2.8 billion – more than twice that of WuXi AppTec. The clinical stage of a new drug includes trials from Phase I to Phase IV, among which Phase IV is the trial phase during the initial commercialization.

Gold in the clinical trials

For every new Drug, four phases of clinical trials are needed; it will also be tested on over a thousand human samples to make it stand out from a candidate pool of around five.  This is the process wherein the most intellectual value is created.

The other business track mainly serves the drug development process, including data management and statistical analysis, site management and patient recruitment, medical imaging and lab services. Even though this unit generates an even higher gross margin of 48.68%, it is the auxiliary element, supporting the primary clinical trial services. 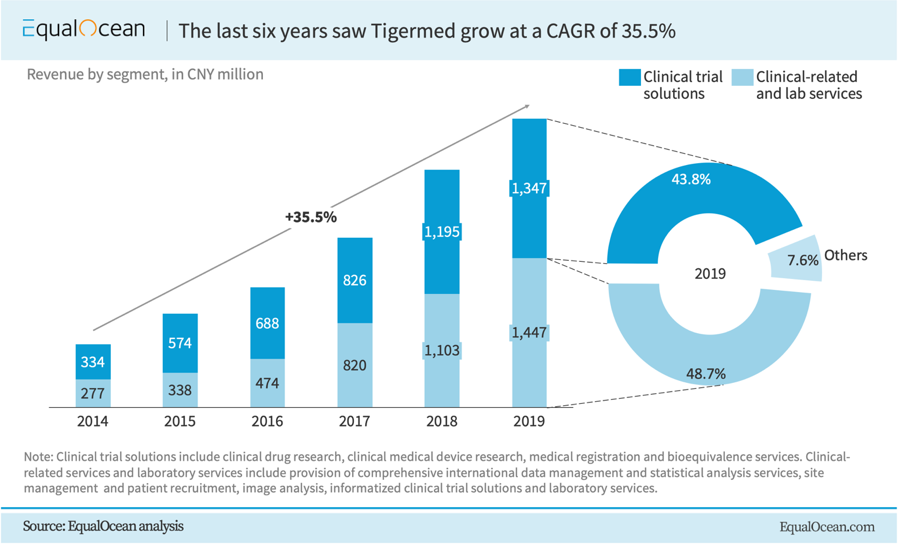 In an overview of the expense structure of Tigermed, the direct labor and clinical trial fees are recorded in the operating costs. The cost for the researchers increased by over 5% relative to the overall operating income.

According to the IFRS, one noteworthy matter is that, in the CRO industry, R&D spending is recorded into operating costs based on the fulfillment of the contracts. Its R&D investment mainly covers the social insurance of R&D staff, software development, system usage, equipment depreciation, etc. Plus, this clinical research company does not capitalize on its R&D expenses – for the last three years, the capitalized R&D was zero. What increased along with the R&D spending through 2017 is the number of R&D staff members at Tigermed – from 378 researchers in 2017 to 468 in 2019. 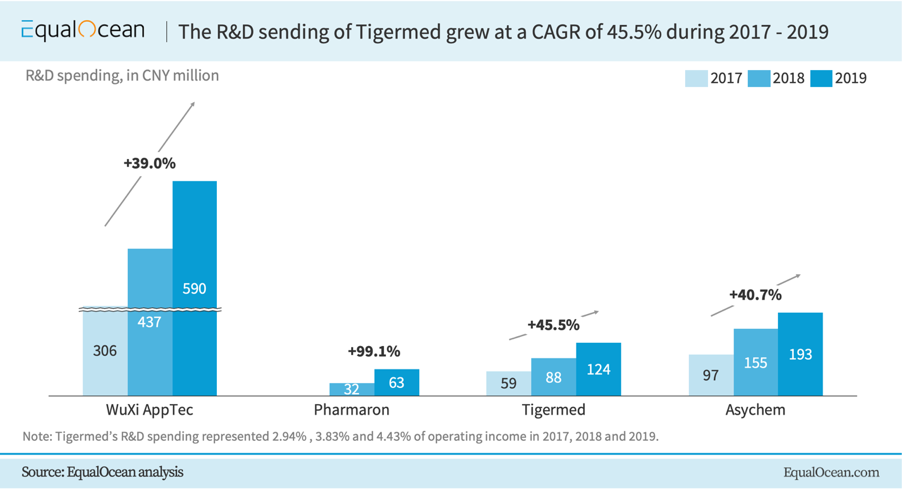 The R&D efficiency is another perspective to compare all these laboratory-heavy pharmaceutical companies. In those medicine companies, R&D efficiency is usually derived by dividing revenues with R&D expenses. The higher the ratio, the more income every penny of R&D investment earns.

However, in the setting of the CRO industry, it is a different story. Since the most significant service provided by CROs is laboratory experiments, they recognize these R&D fees as their major cost related to their contract revenues. As for the R&D expenses shown on their financial reports, these figures reflect costs for those failed experiments. Thus, the lower this R&D efficiency ratio, the more efficiently these lab trials perform.

WuXi AppTec has kept a relatively stable and high R&D efficiency, partly because it has the most extensive coverage all along the process before an innovative drug hits the market. It is expected to generate many synergies out of different medical pipelines and stages.

In specific areas, Tigermed focuses on clinical trials with increased R&D efficiency over the last three years – an advancement in their laboratory capacity. As for the CMO Asychem,  its primary business includes medical devices research, manufacturing during the clinical stage and commercialization.

According to AnXin securities, in the promising clinical CRO industry, Tigermed takes the largest share – 10.4% – of the domestic market while WuXi AppTec accounts for 2.6%. Along the lifecycle of industry, ‘big and complete’ players appear at a particular stage. In a pre-mature industry, smaller, perfectly formed companies with a specific focus will create more positive externality, benefiting the industry overall.