The third unicorn incubated by JD.com has been keeping a low posture since entering healthcare. Despite being a late entrant, it was also the first to make a profit. 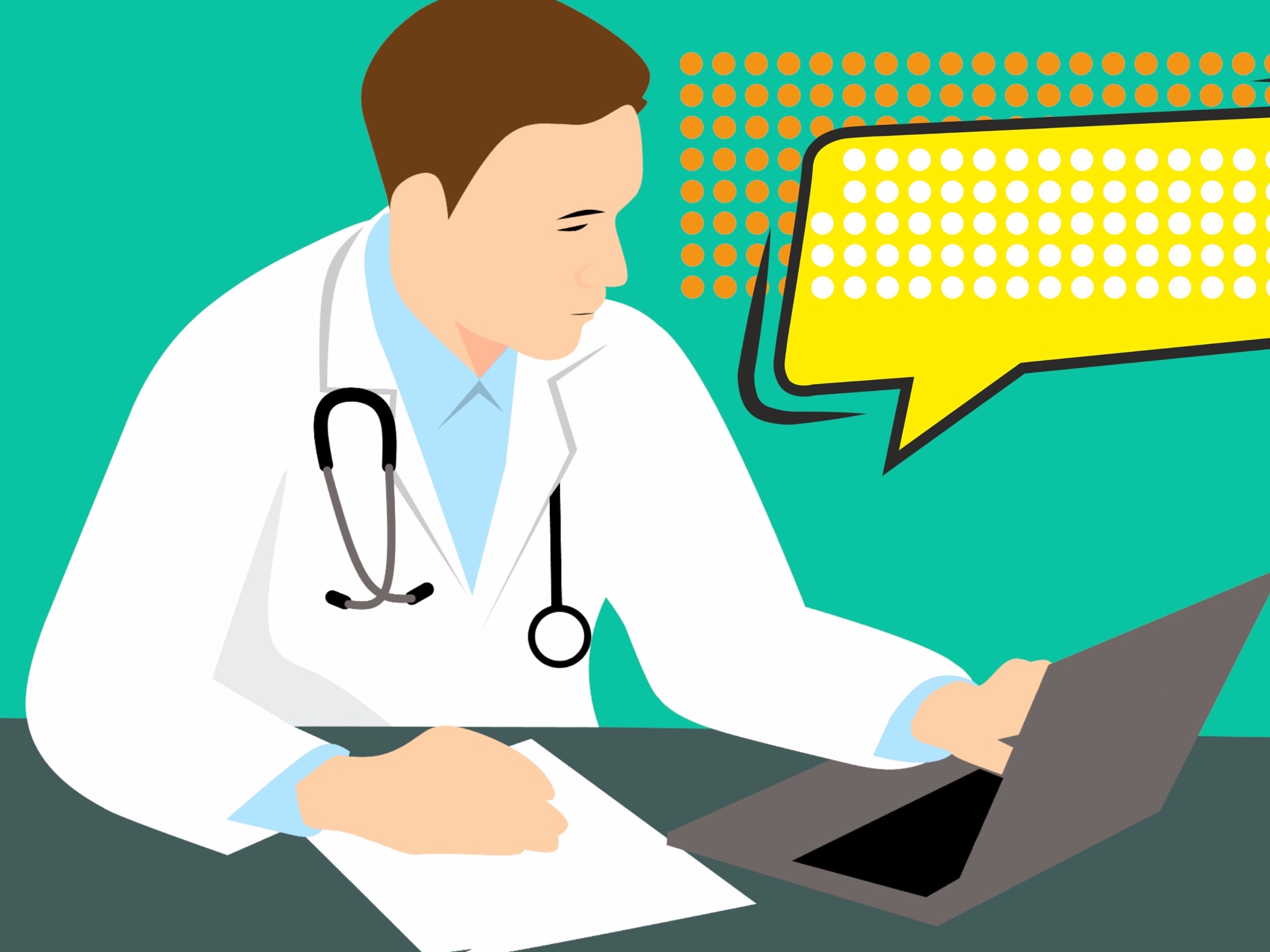 ► Cooperation between JD Health and hospitals has allowed both parties to divert users to profitable businesses.

► Although Ali Health’s losses have been gradually decreasing, JD Health’s profits are not negligible.

► Both policies and the Internet are empowering the healthcare industry.

Following the launch of JD Digits and JD Logistics, JD Health came into the public’s perspective in 2019, arriving with more than USD 1 billion in Series A financing. Different from Ali Health, which received Alibaba’s strategic investment, the unicorn got the favor of external institutions, including the CPE China Fund and CICC Capital.

Although JD Health declared its independence in 2019, tracing its history, JD.com started to lay out strategies for the medical field as early as 2013. Considering the massive market for healthcare, JD Health was not satisfied with the small pharmaceutical retail area. It gradually expanded its focus coverage across four major businesses, including pharmaceutical retail, health services, Internet medical treatment and smart solutions. 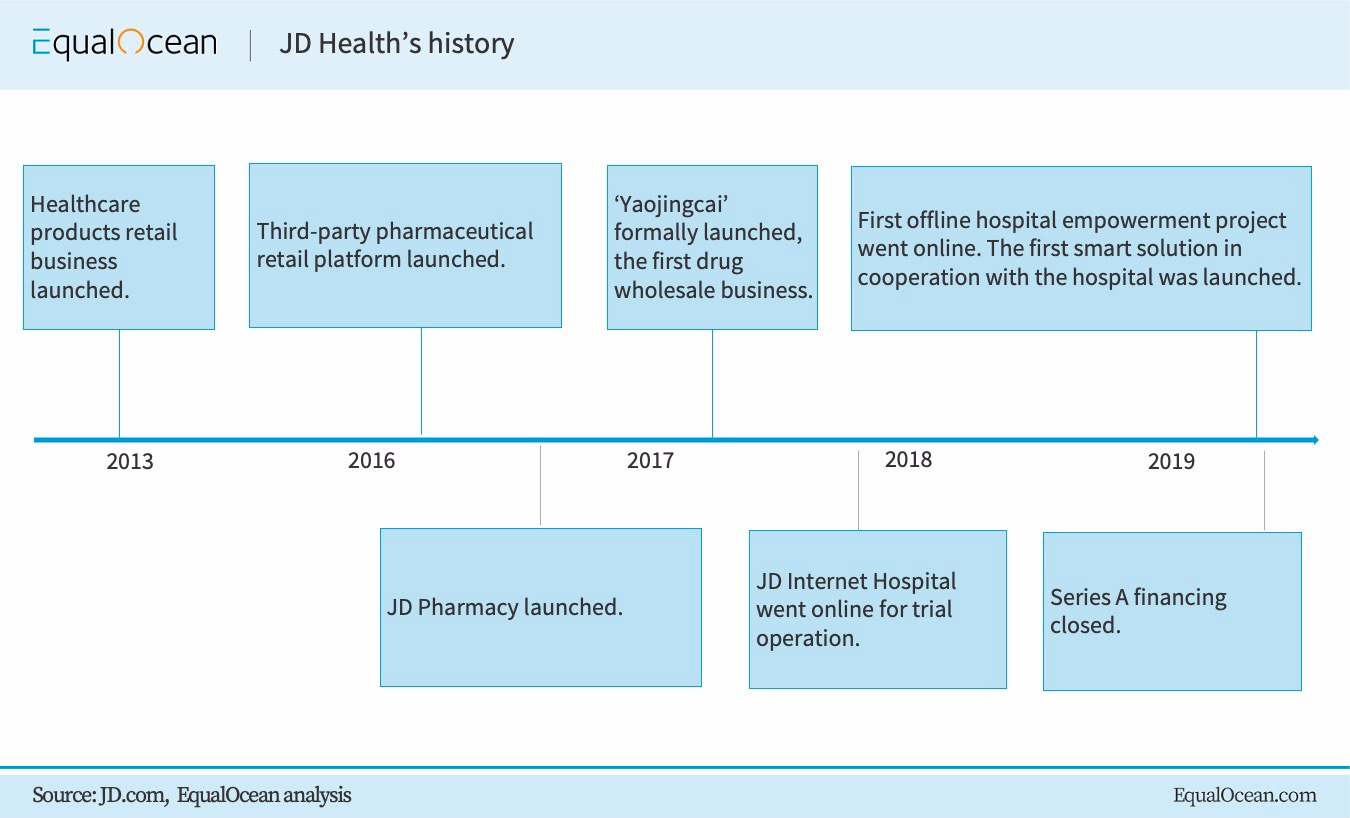 Regarding the retail pharmaceutical business, JD Health has officially announced that it boasts a 15% market share, being the most significant pharmaceutical retail channel. With JD.com’s robust self-operated logistics system, this business already generates the highest revenue for the company.

As mentioned above, JD.com’s ambitions are much more than that. The ultimate goal of this company is to complete the closed-loop of ‘medical + medicine + medical insurance’ products. With the strong competitor Ali Health on the same track, this path is destined to be full of thorns.

Who is better at the closed business circuit? Ali Health vs JD Health

Affected by the epidemic, the hospital has undoubtedly become a nightmare for many individuals. The high demand for online medical treatment and drug distribution makes Internet medical treatments attractive. However, two giants have different business models in the field of Internet hospitals.

JD Health chooses to cooperate with hospitals and pharmacies to gain an advantage in the professionalism of doctors in public hospitals. In January 2019, the JD Suqian Internet Hospital went online, and residents can revisit and purchase medicines. After users use medical insurance to pay, drugs can be delivered directly through JD Logistics to achieve a medical closed loop.

The large traffic gateway of Alipay, backed by Ant Financial, drives users directly to medical insurance providers, who they can pay through this third-party platform. In contrast, JD Health’s users need to bind medical insurance cards to their apps to pay, which is inferior to Alipay, an integrated local life services platform.

However, having strong self-operated JD logistics makes JD Health stand out, with low costs and more effective management. Ali Health, backed by Alibaba, has always been committed to investing in express companies and is a bit behind.

In the long run, one advantage of JD Health is that it can divert patients to cooperative hospitals for profit. Moreover, many patients’ needs still need to be met at local hospitals, and it is hard for an online diagnosis to address symptoms directly. At present, this business is experiencing a loss, as JD Health has to discount services to push Internet hospitals to the public. After the user’s stickiness increases, its drainage effect will be amplified, or even show new barriers.

A quiet – but not negligible – telehealthcare rival 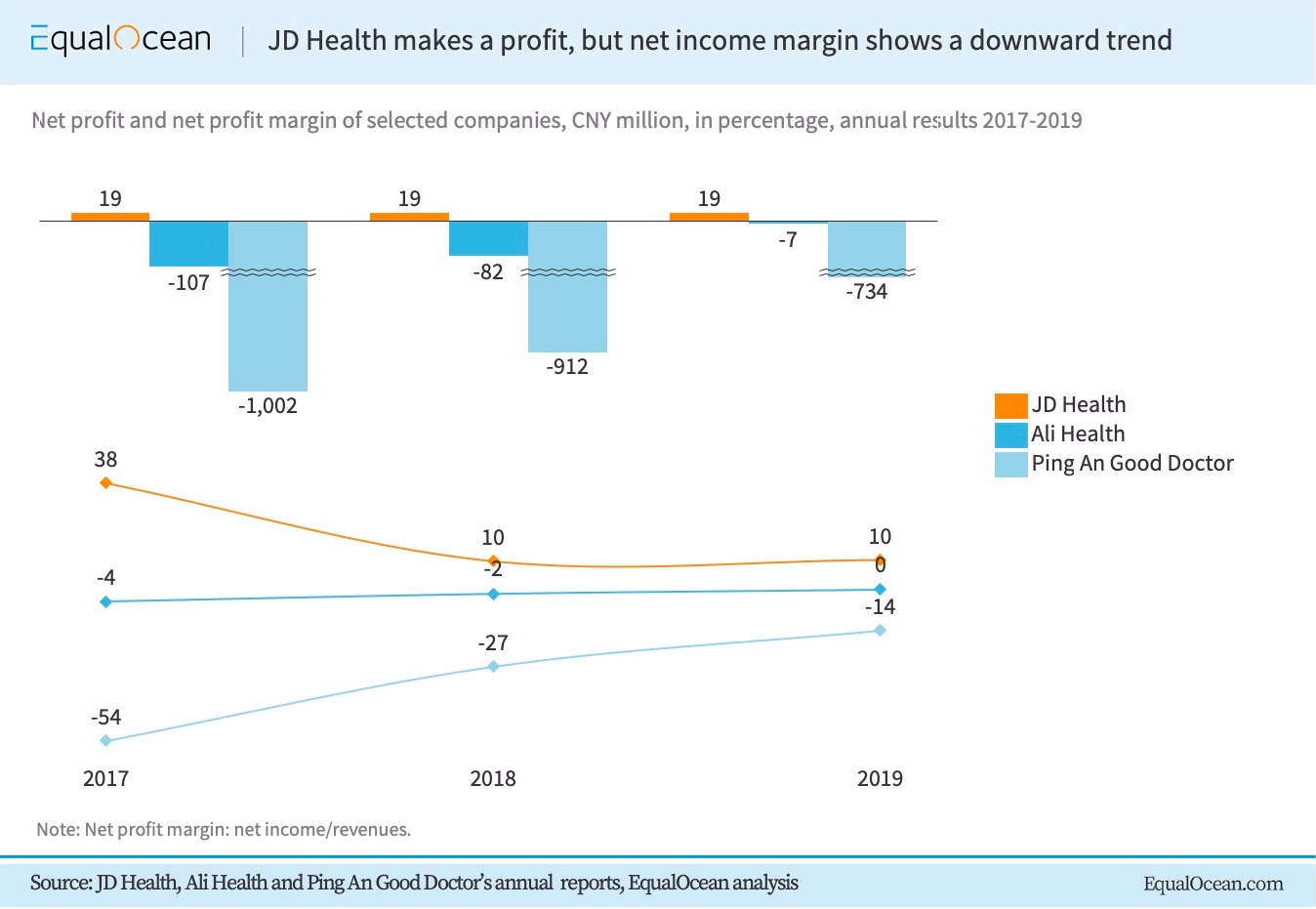 Among the three giants, which are often compared, JD Health is the only one that is experiencing profit. In the past three years, both Ali Health (00241:HKEX) and Ping An Good Doctor (01833:HKEX) haven’t turned losses into profits. However, what JD Health needs to pay attention to is that the losses of the other two giants are decreasing year by year, especially Ali Health, which is likely to be profitable this year.

Similarly, in terms of profit margin, only JD Health presents a downward trend, indicating the gap in profitability is gradually narrowing.

In reality, JD Health’s to B business is its unique advantage, distinguishing it from other Internet medical platforms. However, the gross profit margin of this business is relatively low, as the current approach is to increase sales through promotion, which seems like inadequate long-term planning.

Regarding net profits, although Ali Health and Ping An Good Doctor are catching up closely, JD’s third unicorn, with rapid development, is formidable.

What is the value created by policy and the Internet?

According to the statistics of the National Health Commission, as of October 2019, 269 Internet hospitals had been built nationwide. In April last year, the General Office of the State Council issued ‘Opinions on Promoting the Development of Internet + Medical Health’ – since then the number of hospitals has increased by 173.

After the outbreak of COVID-19, eight new Internet medical policies drove the development of the industry. Amid the pandemic, the number of consultations with third-party Internet service platforms increased by more than 20 times over the same period, and the number of prescriptions increased by nearly ten times.

During the two sessions, Yang Yuanqing, deputy to the National People’s Congress and chairman of the Lenovo Group, proposed accelerating the construction of a new generation of ‘Internet + medical and health’ platforms.

“The biggest value of the Internet in the field of medical and healthcare is that it can be decentralized, activate various medical resources, and match the appropriate medical resources to the right patients.” The Medical Internet 3.0, as defined by Xin Lijun, the CEO of JD Health, rests on a new plan crafted by the group for this ‘new theme.’

The head-on confrontation between JD.com and the three Internet giants, or BATs (Baidu, Alibaba and Tencent), looks inevitable as they are all powerfully engaged in Internet healthcare. With the rapid incursion of JD Health, accompanied by unprecedented profitability, JD.com’s ambition to make BAT to BATJ looks more and more realistic.