NASDAQ welcomes its first Chinese NGS cancer detection company, Burning Rock. The company owns the largest market share in Chinese NGS market but still hasn’t begun to profit. What is the cause and how long does it still need?

► Burning Rock Biotech, China’s largest NGS cancer detection service provider, boarded on NASDAQ last Friday. The share price rose 50% on the first day with a market cap over USD 2.5 billion.
► Until now, the company hasn’t profited yet, with a loss of over CNY half a billion in the last four years.

On June 12, Burning Rock Biotech (BNR:NASDAQ), the largest Next Generation Sequencing (NGS) cancer detection company in China, was officially listed on NASDAQ under the ticker BNR. This is the first Chinese NGS cancer testing company to go public at NASDAQ. The stock had an impressive first day on the market, with a 50% rise in share prices and a valuation of over USD 2.5 billion.

Founded in 2014, the Guangzhou-based company has been focusing on precision oncology and early cancer detection, offering 13 Next Generation Sequencing (NGS)-based cancer treatment option tests for a variety type of cancers including lung, gastrointestinal and prostate cancer.

According to China Insights Consultancy (CIC), in the last year, Burning Rock owned the largest share 26.7% of China’s NGS-based cancer therapy selection market. The leadership cannot be realized without a clear business strategy.

Entering a hot market also means facing stiff competition. Burning Rock has won the game with a two-pronged commercial infrastructure, consisting of both central and in-hospital laboratories, which helped them maximize market penetration and create higher entry barriers. The central laboratory processes cancer patients’ tissue and liquid biopsy samples delivered from hospitals across China and issues test reports. It targets small-and-medium hospitals and accounts for the substantial majority of the company’s revenue. As of now, the company has built relationships with 4,162 physicians from 602 hospitals across China.

The company is also the first to provide in-hospital testing services for large-scale hospitals desiring to conduct laboratory tests on their own. Since 2016, the company has started to offer turn-key solutions by cooperating with 44 Class III Grade A hospitals to establish their in-house laboratories, providing them with equipment, operation systems and reagent kits on a recurring basis. While revenue from the in-hospital model is still relatively small, the early and wide deploy has given the company an overwhelming 79.9% market share in the in-hospital segment of China’s NGS-based cancer therapy selection industry in terms of the number of patients tested in 2019, according to CIC.

While the company is growing in size and ahead of its peers, it still struggles to end losses: the prospectus shows that the company has a net loss of CNY 131 million, CNY 177 million and CNY 169 million, respectively from 2017 to 2019. Total losses have exceeded CNY 500 million in the last four years. 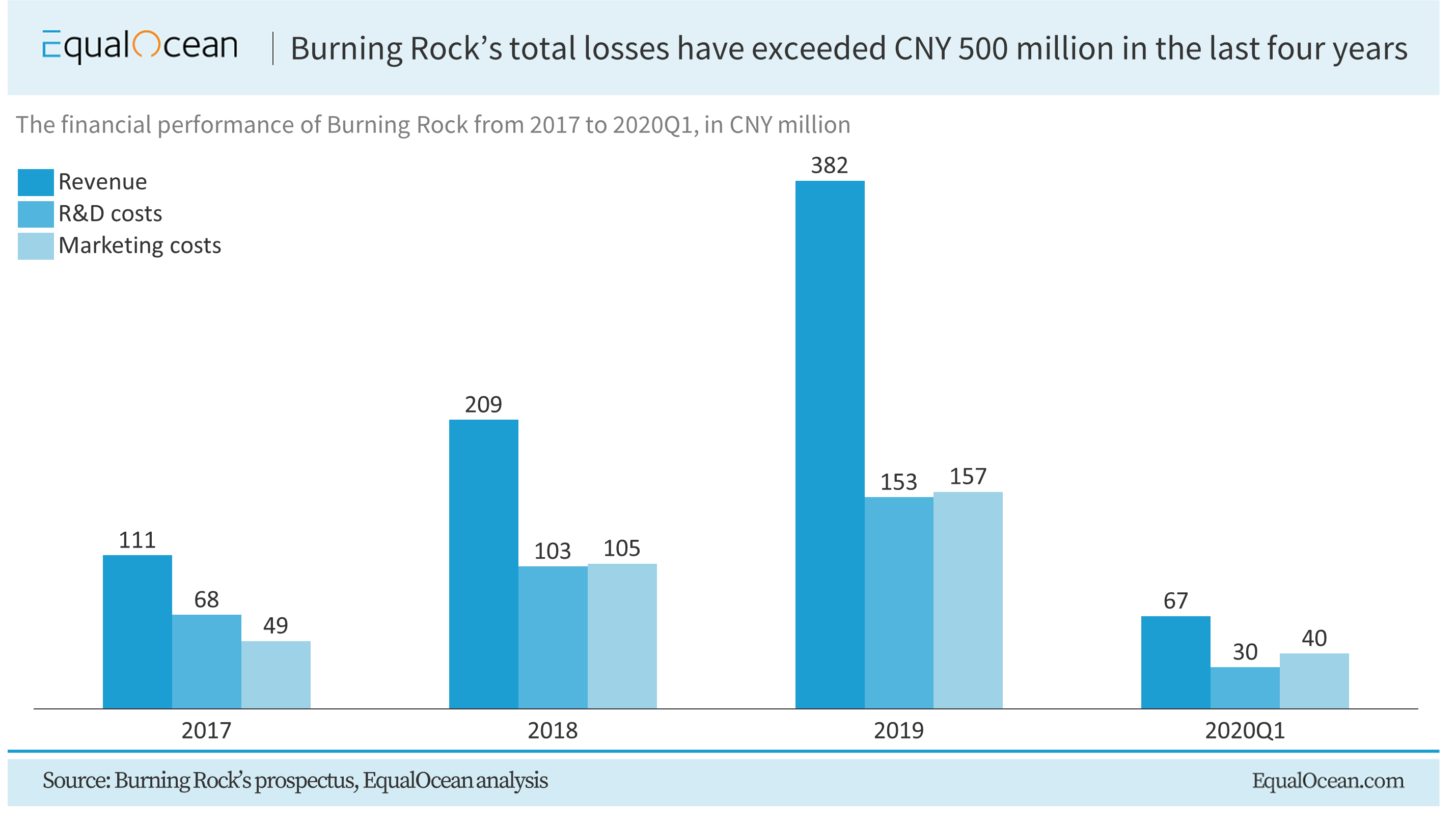 As a new-born industry, NGS requires a considerable amount of R&D and market exploring costs, which are the main factors preventing NGS companies from making money. In 2019, the company’s annual R&D and marketing expenses were as high as CNY 157 million and CNY 153 million, respectively, which accounted for approximately an annual 40% and 40% of total revenue.

Burning Rock is not alone in this dilemma. The NGS-based cancer detection industry as a whole hasn’t yet achieve profitability. Another typical example is Genetron, the Chinese NGS-based testing company who is also about to board NASDAQ this Friday, lost CNY 1.56 billion for the last three years. In addition to the high R&D and marketing costs, the redundant approval processes, inconsistent regulation, and ethical controversies have also been barriers for NGS companies to make money. As of now, there are only seven NGS-based reagent kits approved by China’s National Medical Products Administration (NMPA).

Despite the deficit, investors remain optimistic about NGS companies anyway. Burning Rock’s share price surged 50% on its first day listed. Same goes with Exact Sciences, the US NGS giant founded in 1995, who barely broke even since last year yet valued around USD 13.4 billion. The confidences are not from nowhere.

While the companies still have to work patiently on a technology breakthrough that can bring down the R&D costs, a tangible drop in marketing expenses is around the corner. According to CIC, though the current penetration rate for NGS-based cancer therapy selection in China is relatively low, at 6.4% in 2019, the previous substantial investment in market cultivation is likely to be paid off when the number reaches 21% five years later. 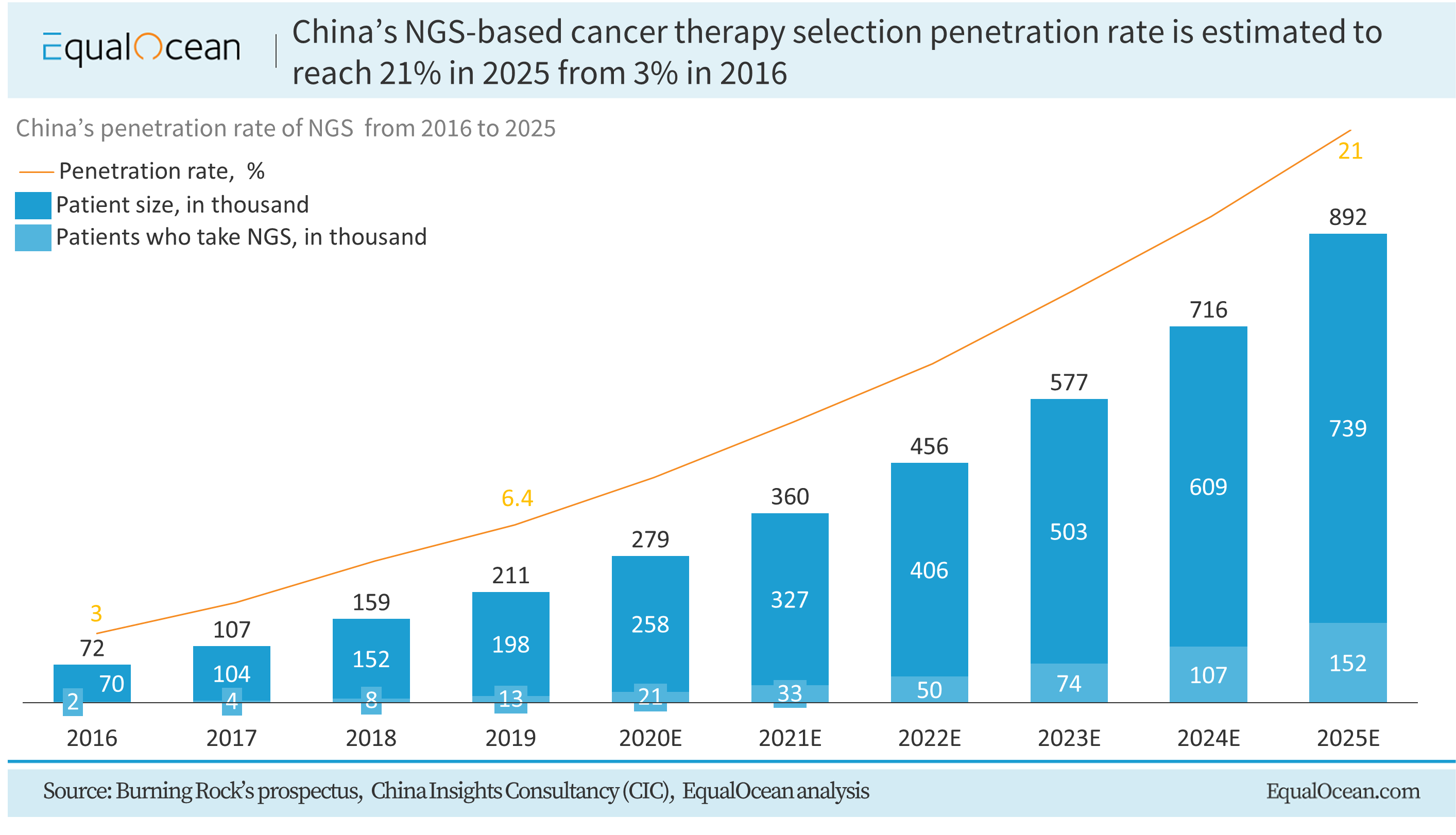 In addition, Chinese government departments have been releasing favorable policies, including covering 90% of gene testing expenses by Medical Insurance since June 2019, which is expected to boost the consumption considerably.

It's still too early for genetic testing companies to talk about profitability. But for Burning Rock, the new round of capital injection, together with the dropping expenditure and increasing demands, is taking the company one big step closer to the goal.