How Huawei Can Work Around US Chip Ban 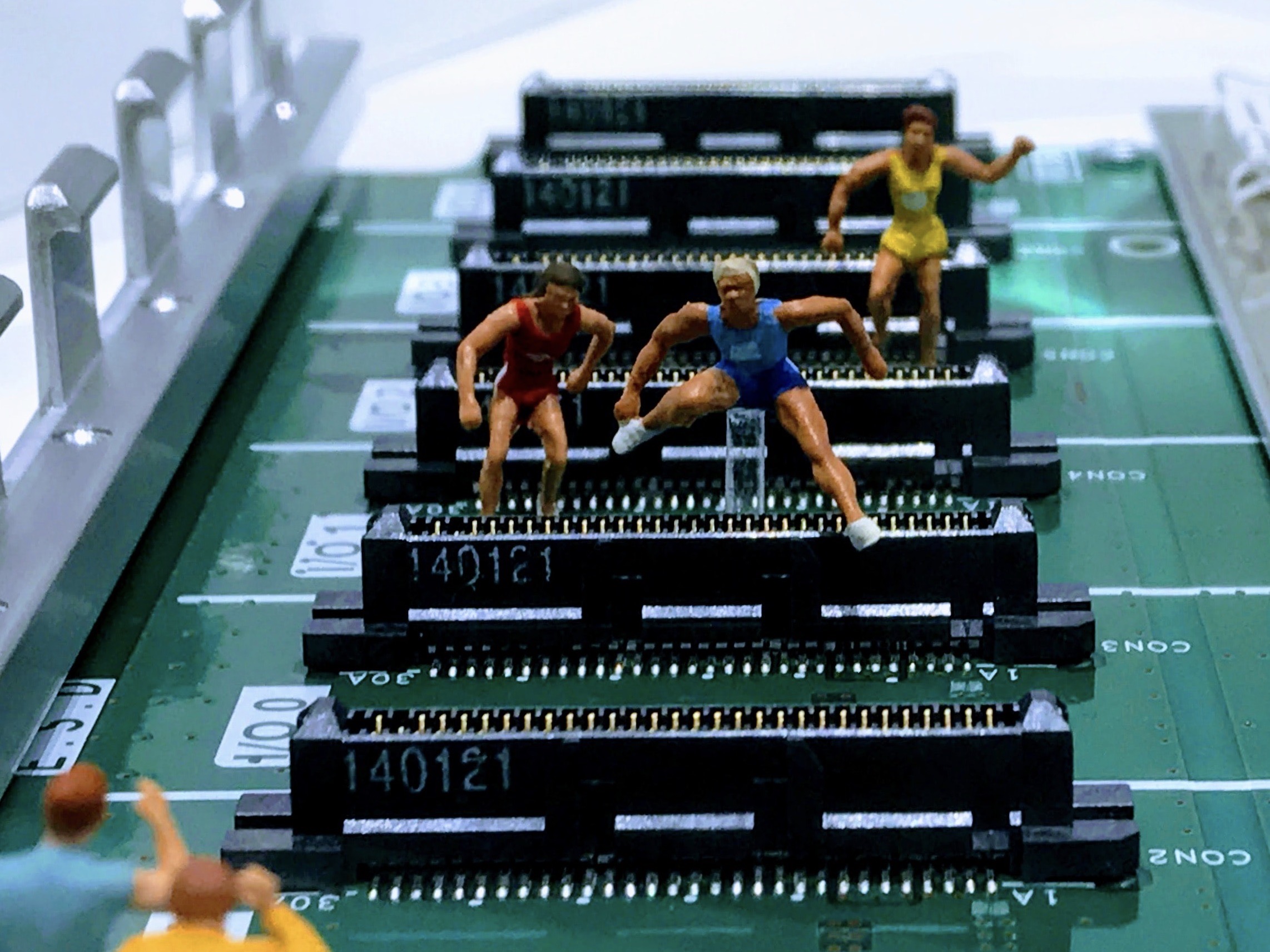 A US ban on foreign companies’ sales of chips to Huawei Technologies if American equipment or software is involved will undermine America’s already-weakened position in the global semiconductor equipment market, industry sources say.

Chip fabricators will remove American equipment from production lines in order to maintain market share in China, the world’s largest purchaser of semiconductors.

Samsung, the world’s biggest fabricator of memory as well as logic chips after Taiwan Semiconductor Manufacturing Corporation, already has set up a small production line for top-of-the-line 7-nanometer chips using only Japanese and European chip-making equipment, according to Electrical Engineering Times.

The Dutch firm ASML is the only provider of the Extreme Ultra-Violet (EUV) etching machines required to produce the tiny transistors on 7-nanometer chips, which can hold 10 billion transistors on a silicon wafer the size of a fingernail. Chip testing machines by Japan’s Lasertec sell for US$40 million apiece and are rated the best on the market.

Samsung and Huawei are considering a deal under which the South Korean giant would fabricate advanced chips for Huawei’s 5G equipment, and Huawei would in effect cede a substantial amount of its smartphone market share to Samsung, I reported in Asia Times Financial May 20. Mobile phones are Samsung’s flagship business, but they are a relatively small contributor to profits at Huawei, whose core business remains telecommunications equipment.

South Korea exports almost twice as much to China as it does to the United States, and it relies on China to restrain the erratic North Korean regime. Seoul told Washington that the ban on sales of chips made with American equipment to Huawei and other Chinese companies was “unacceptable,” according to industry sources.

A deal with Samsung offers one way for Huawei to work around the Commerce Department ban, details of which are expected to be announced in mid-July. Another workaround – already in progress – is a set of “Manhattan Projects” to improve China’s domestic semiconductor equipment industry, now a fourth-place player after the US, Europe and Japan.

Huawei has contracts to install 600,000 5G mobile broadband base stations, powered by dedicated chips designed by its HiSilicon subsidiary and fabricated in Taiwan by TSMC. The Chinese firm probably has a year and a half of chip inventory. It might be able to fill the gap for its base stations with domestically produced chips.

China lacks the capacity to produce the most-advanced 7-nanometer and smaller chips, although its flagship fabricator, Semiconductor Manufacturing International Corp (SMIC), promises to have 7-nanometer production running by the end of this year. If SMIC sells chips to Huawei made with American equipment, presumably it would be subject to American sanctions, including a shutoff of further equipment sales.

The critical issue is the speed at which China can build up its domestic chip fabrication capacity. When the Trump administration cut off sales of Qualcomm chips to Chinese mobile phone maker ZTE in April 2018, ZTE effectively shut down.

How long will it take?

By the following December, though, Huawei had announced its own Kirin chipset for high-end mobile phones and its Ascend chips for high-performance servers. Both are fabricated by TSMC. The speed at which Huawei rolled out its own designs surprised Washington, and the question that dominates every semiconductor chat room on the internet is how long it will take China to do the same for semiconductor manufacturing equipment.

American firms like LAM Research and Applied Materials still have the largest market share in several parts of the complex production process, but in every phase of fabrication, Japanese, European and Chinese equipment manufacturers offer serviceable substitutes. Holland’s ASML has the only real monopoly left in the chip fabrication business, in EUV lithography machines.

An EE Times report ranks the leading equipment providers at each of the 11 stages of the chip fabrication process. “Although it is theoretically feasible to build a semiconductor production line without American equipment, Japanese, European and even domestic [Chinese] equipment doesn’t lead in many of these areas.”

Chinese domestic semiconductor equipment companies trail their American rivals because China hasn’t taken the trouble to build out the sector. Applied Materials, a leader in plasma etching machines, expects to spend $360 million this year in CapEx.

Its closest Chinese competitor, Advanced Micro-Fabrication Equipment (ticker 688012 CH), will spend exactly one-tenth as much. China’s “Made in 2025” drive for domestic semiconductor fabrication assigned low priority to domestic equipment because it was cheaper to buy American, Japanese and European machines than to invest heavily in domestic substitutes.

The Commerce Department’s ban on foreign fabricators’ sales of chips to Huawei – if they are made with American equipment – changes everything.

In 2019 the US government persuaded the Netherlands to block ASML from selling a new top-of-the-line lithography machine to China’s SMIC, with a reported price tag of $130 million. China may not be able to buy Western equipment, but it can hire anyone it wants.

Anticipating restrictions on US chip sales, China has recruited nearly a tenth of Taiwan’s chip engineers. Nikkei reported on December 3, 2019: “More than 3,000 semiconductor engineers have departed Taiwan for positions at mainland companies, the island’s Business Weekly reports. Analysts at the Taiwan Institute of Economic Research say this figure appears to be accurate. That amounts to nearly one-tenth of Taiwan’s roughly 40,000 engineers involved in semiconductor research and development.”

The learning curve for building world-class semiconductor equipment is likely to steepen dramatically due to the application of Artificial Intelligence to the production process, an area which China has a strong and perhaps leading position. Intellectual property is not the obstacle to chip fabrication; the problem, rather, is that hundreds of different processes are involved, and each of them requires extreme precision. But AI can speed things along.

According to David Fried, chief technology officer of Coventor, a subsidiary of LAM, said: “The equipment has sensors that are analyzing data from operations of the tool and monitoring of the wafer process. For instance, sensors and data logs are picking up information about which wafer went to which chamber, where the robot arm is at any point in time, etc.

“All that data has to go into a system where it can be harvested and analyzed in real-time. And that’s just from one piece of equipment. In a fab, you have fleets of that kind of equipment, and then you have all sorts of other equipment and different processes. This is a massive big-data challenge, and what you really want to start doing is learning on that data.”

It is not known how fast China can create domestic substitutes for US equipment, but it has access to the world’s best chip engineers from Taiwan as well as expertise in the most advanced industrial research methods. Big data simulation can increase the speed and reduce the cost of industrial experimentation by a factor of 100.

TSMC is the world’s most advanced chip fabricator, and the US government hailed the announcement of TSMC’s plan to build a $12 billion fabrication plant in Arizona as an important step in re-shoring American high-tech production. TSMC’s commitment to chip fabrication in the US is tentative at best, industry analysts believe.

The new plant will produce only 20,000 wafers a month, barely half of Apple’s requirements, and not enough to challenge Taiwan’s home-based industry. The 5-nanometer chips that TSMC will produce starting in 2024, moreover, will already be obsolete when the plant opens. TSMC is investing in 3-nanometer capacity in Taiwan.

From an American national security vantage point, a Taiwanese chip fabricator for sensitive military uses is less than secure. The close contact between Taiwan and the mainland creates extensive opportunities for Chinese infiltration of any TSMC facility.

The consensus in the United States holds that the Trump administration’s assertion of extraterritorial control over the use of chips made with American equipment will succeed at least temporarily. The Wall Street Journal editors wrote this week:

“Other countries may face a more difficult choice. Foundries in Southeast Asia that rely on Huawei’s business may resent being subject to extraterritorial U.S. rules, and one risk is that those governments are pushed closer to Beijing. Huawei will also accelerate its efforts to make chips using its own know-how and take a faster technological leap.

“Some question whether the U.S. can enforce the sale ban in a complex industry scattered worldwide. Yet the success of U.S. sanctions against Iran highlights Washington’s ability to monitor global transactions when it is a high priority. Thanks to America’s leading position in semiconductors going back to the 20th century, U.S. law is still a gatekeeper to the most sophisticated microchips, and Washington can likely block China from achieving technological parity with the U.S. – for now.”

Earlier this year the Defense Department intervened to block the same Commerce Department proposal that the administration adopted in May. The risks to American pre-eminence are enormous. American leadership in semiconductor manufacturing is already a thing of the past in lithography, the most difficult part of the production process, and it is slipping elsewhere.

The chip ban gives the world an enormous incentive to circumvent the US, raising the risk that the US rather than China will be left without a chair when the music stops.

This article was originally published on Asia Times Financial and was written by David P. Goldman