TuSimple is dedicated to bringing the most cost-effective autonomous driving solutions to shippers and logistic companies in both China and America. Their obsession with cost control has given them a head start on commercialization. 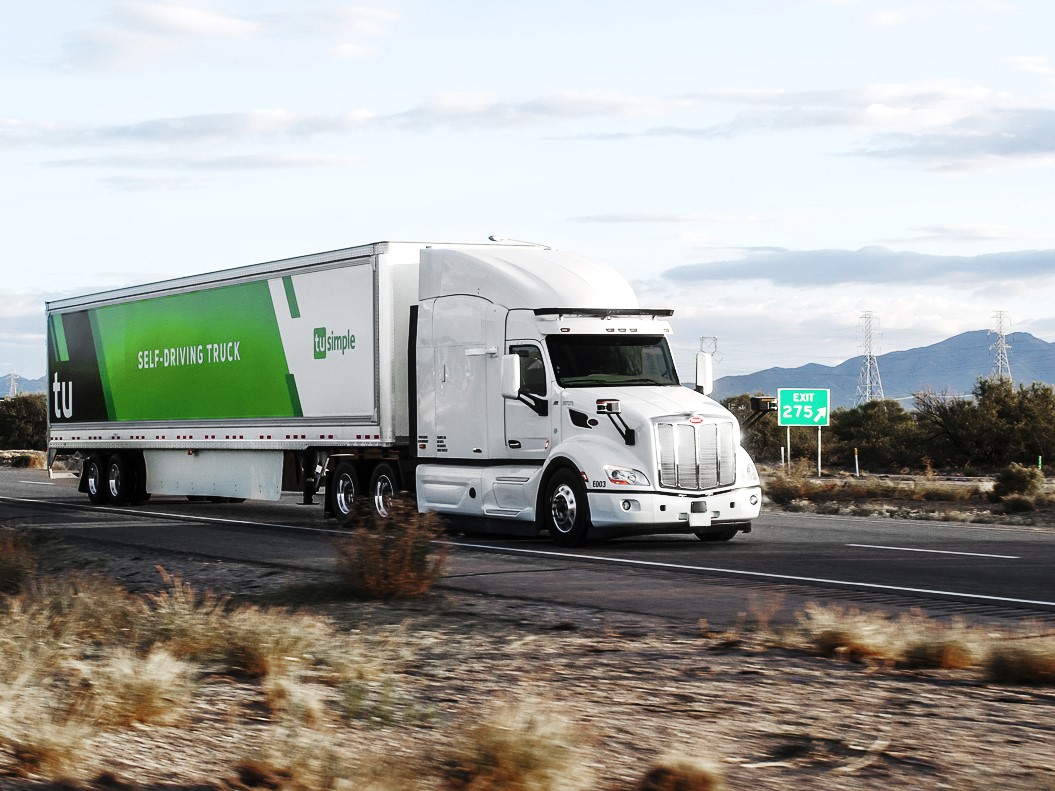 ► Though the market size is relatively small, with an explicit application scene, an affordable technology, and a sound regulatory system, the autonomous truck is very likely to realize commercialization sooner than other self-driving vehicles.
► TuSimple aims to bring the most cost-effective autonomous truck solution to both Chinese and American shippers and logistics companies.
► The company’s backbone technology is a proprietary automotive-grade camera system co-developed with Sony Semiconductor, which unlike Waymo’s lidar-focus solutions, utilized customized HD cameras that are much cheaper than lidar.
► The dual-site deployment and the obsession with cost reduction put the company one step ahead of the commercialization process.

A big opportunity in a small market

IHS Automotive, the American automotive research firm, divides application scenarios for autonomous vehicles into four categories: last-mile delivery, autonomous trucks, fixed-route and Robotaxi. While the four businesses have the same core technology, they are very different in the commercialization process.

Robotaxi has been the hottest in recent years. Many giant companies like Google, GM Cruise and Baidu are implementing their own Robotaxi fleets. Autonomous trucks, on the other hand, doesn’t share the same buoyancy. The once ambitious self-driving truck start-ups, including Otto and Starsky Robotics, were either acquired or declared bankruptcy. Even those who survived still don’t get as much support as Robotaxi operators do. Take for example Pony.ai and TuSimple, the two self-driving solution developers who both run their vehicles in both China and the US. Only the former has implemented Robotaxi, while the latter focuses on freight. While Pony.ai is still in the early rounds, its total funding exceeded TuSimple’s twice over. 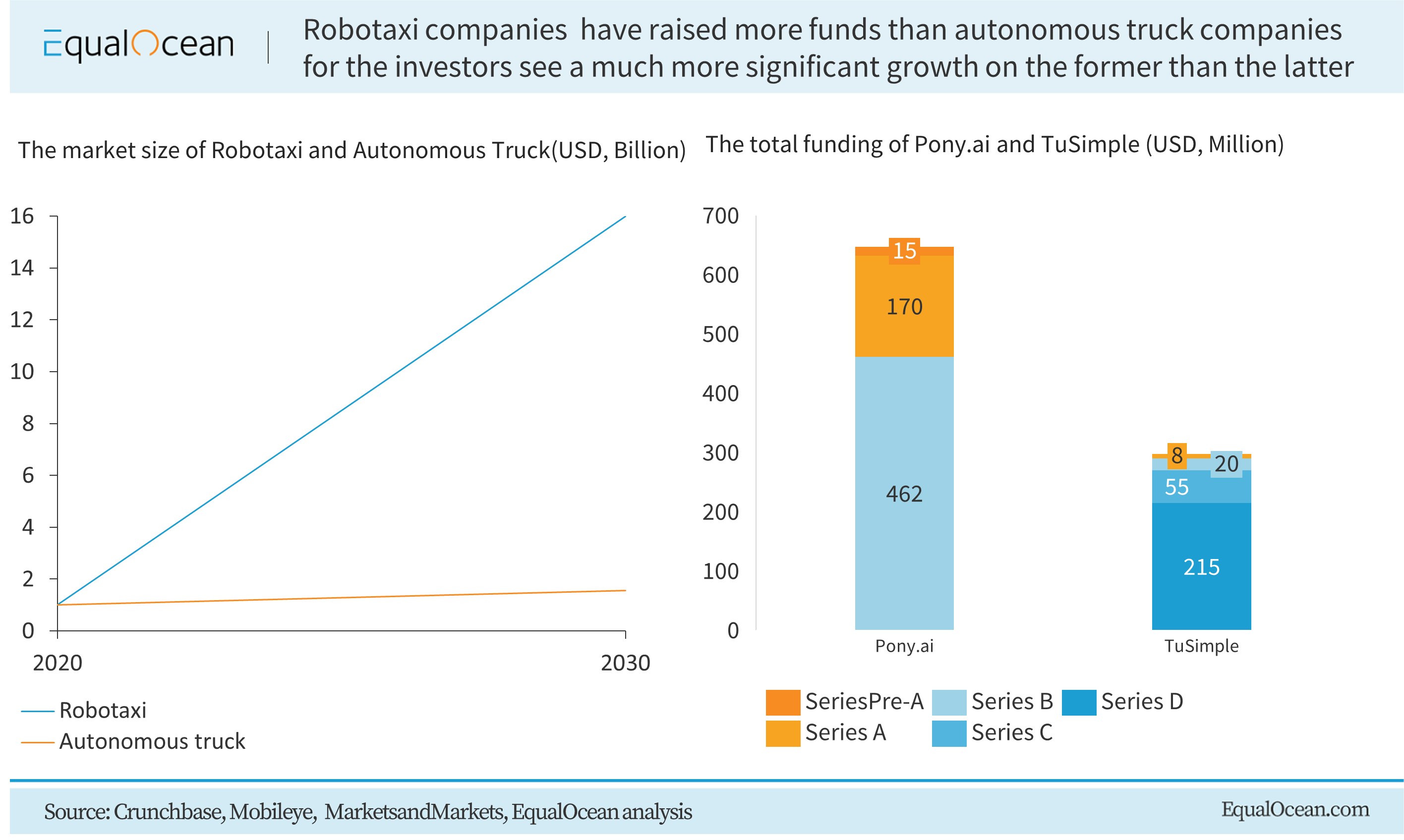 The vast gap could be the result of the dominant potential demand Robotaxi owns. According to Mobileye’s research, the market size of Robotaxi will be worth more than USD 16 billion by 2030, while the number by then will be USD 1,550 million for self-driving trucks, according to MarketsandMarkets.

But the size isn’t everything. While the self-driving taxi is expected to save operation companies 70%-80% of profit currently taken by the human drivers, according to WeRide’s research, in this stage, with the immature technology and stubbornly high R&D costs, the goal is not likely to be achieved soon.

Autonomous trucks, on the other hand, require easier technology and less costs. Since the trucks transport goods rather than humans, and run on highways mostly, they have lower bars on sensitivity and speed control, and thus cost way less than developing a self-driving passenger vehicle.

Besides, according to the US Department of Labor, the median annual income for heavy truck drivers in the US is USD 42,480, surpassing the median annual income of USD 37,690 for all occupations in the nation. Two drivers are required in one truck during one trip. The autonomous truck can at least take one driver off the truck to save 50% of the expense.

Furthermore, fatigue driving problems still exist in freight companies. A report from the US Department of Transportation showed that, in 2016, fatal accidents related to heavy trucks in the US numbered 3,864, which is 11.2% of all vehicle fatalities during the year. Autonomous technology, however, will enable trucks to run safely for 24 hours nonstop, even in extreme weather, which can highly promote the efficiency and safety of freight while saving money.

The lower cost and tangible implementation have given the autonomous truck a great opportunity to achieve commercialization sooner than Robotaxis will.

TuSimple intends to further speed up the process

Founded in 2016, TuSimple, the Beijing and San Diego co-based autonomous driving company has been focusing on bringing the most cost-effective L4 autonomous driving solution for long-haul heavy trucks in both China and America. And it is leading on that track.

Over the last five years, the company has secured a total of USD 298 million fundraising led by renowned capitals including Sina, Mando Corporation, CDH Investments and UPS, with a post-money valuation of over USD 1 billion.

In contrast with Tesla, which has again delayed its self-driving trucks’ time of delivery to 2021, TuSimple is the first and only to operate a fleet of autonomous heavy-duty semi-trailer trucks on pre-mapped shipping routes. It has provided door-to-door services to a total of more than 20 clients in the US, including UPS Express, Amazon and United States Postal Service (USPS). Three shipping terminals are implemented in Arizona, Tucson and Texas with three more under construction. The company is also running road tests in Fujian and Shanghai, China, even though the commercialization may come later due to regulatory restrictions. 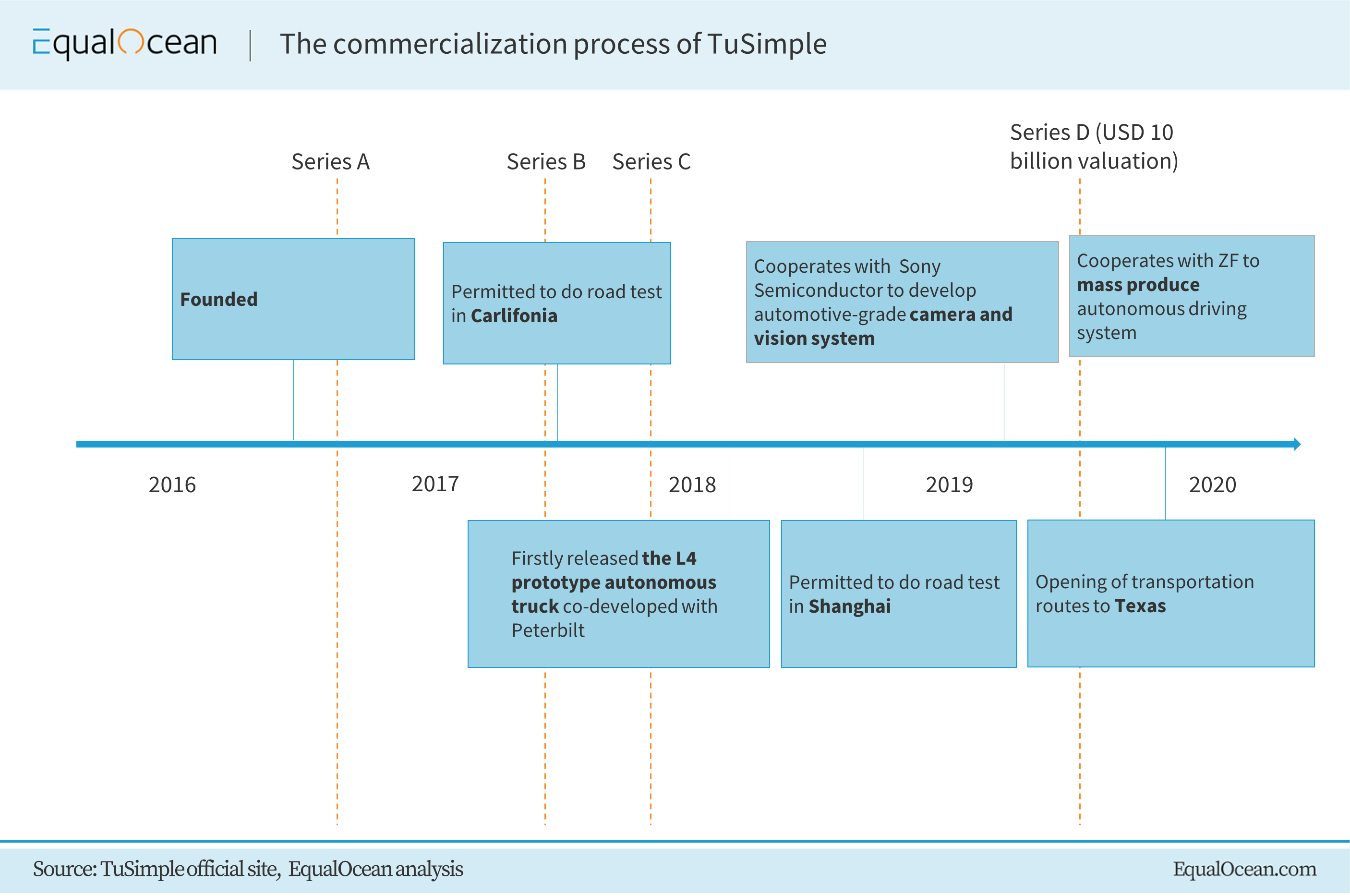 The Sina-backed company claimed that revenue reached USD 1 million per month in the second half of 2019. Still, it would only become profitable when the safety officers are no longer needed, and the company intends to go public at that time.

The secret is the obsession for cost control

One of the most significant reasons for TuSimple’s fast commercialization is its obsession with cost control. As known to all, lidar is an indispensable part of autonomous vehicles due to its excellent performance in ranging and resolution. It is the best solution for driverless cars to cope with complex road conditions. But the sensor, once exclusive to the military, also costs a considerable amount. The US lidar giant Velodyne sells its 64-channel lidar units for USD 80,000 each.

Faced with such a huge expense, TuSimple began to reflect on whether it is really necessary. And apparently, it’s not. Since the trucks spend 90% of operating hours on highways where they should face obstacle-free movement, the company realized that its truck doesn’t have to be so sensitive, but it has to see further than lidar because its long body requires a much longer safe braking distance.

Unable to find a system on the market that fits its needs, the company leaders decided to create one by themselves. Partnered with Sony Semiconductor, TuSimple successfully produced its proprietary automotive-grade camera and vision system that can see 1000 meters away at night and in extreme weather, in May 2019. And most importantly, since the system is mostly based on HD cameras, it costs much less than lidar-oriented solutions. This integrated system started mass production since this April, jointly with ZF, the renowned German automotive supplier.

In addition, the company also did a good job on energy saving. A joint study by TuSimple and the University of California, San Diego shows that automated trucks can save up to 10% on fuel consumption with TuSimple’s self-driving system, and estimates that, if all medium-and-heavy-duty trucks in the US were equipped with the same system, USD 10 billion annual fuel cost would be saved.

With a sound technology foundation, the company also benefited a lot from its duel-site operation strategy. While their cross-city trunk line shipping has already been commercialized in the US, they are also actively road testing in harbor roads and logistics parks in Shanghai,  to collect as much operation data from different road conditions as possible. The system is now refined by nearly 2000-hour and 30,000 miles of real-world road tests.

CONTACT US
Scan QR code to contact us for professional consulting services
Next article
Midea: A Brand that Surrounds People’s Lives