China's AMEC – from Etching to MOCVD (and Back?)

In a landscape wherein the top 3 etching equipment suppliers account for about 94% of the global market, AMEC is likely to rely on the sales of MOCVD machines in the near future. 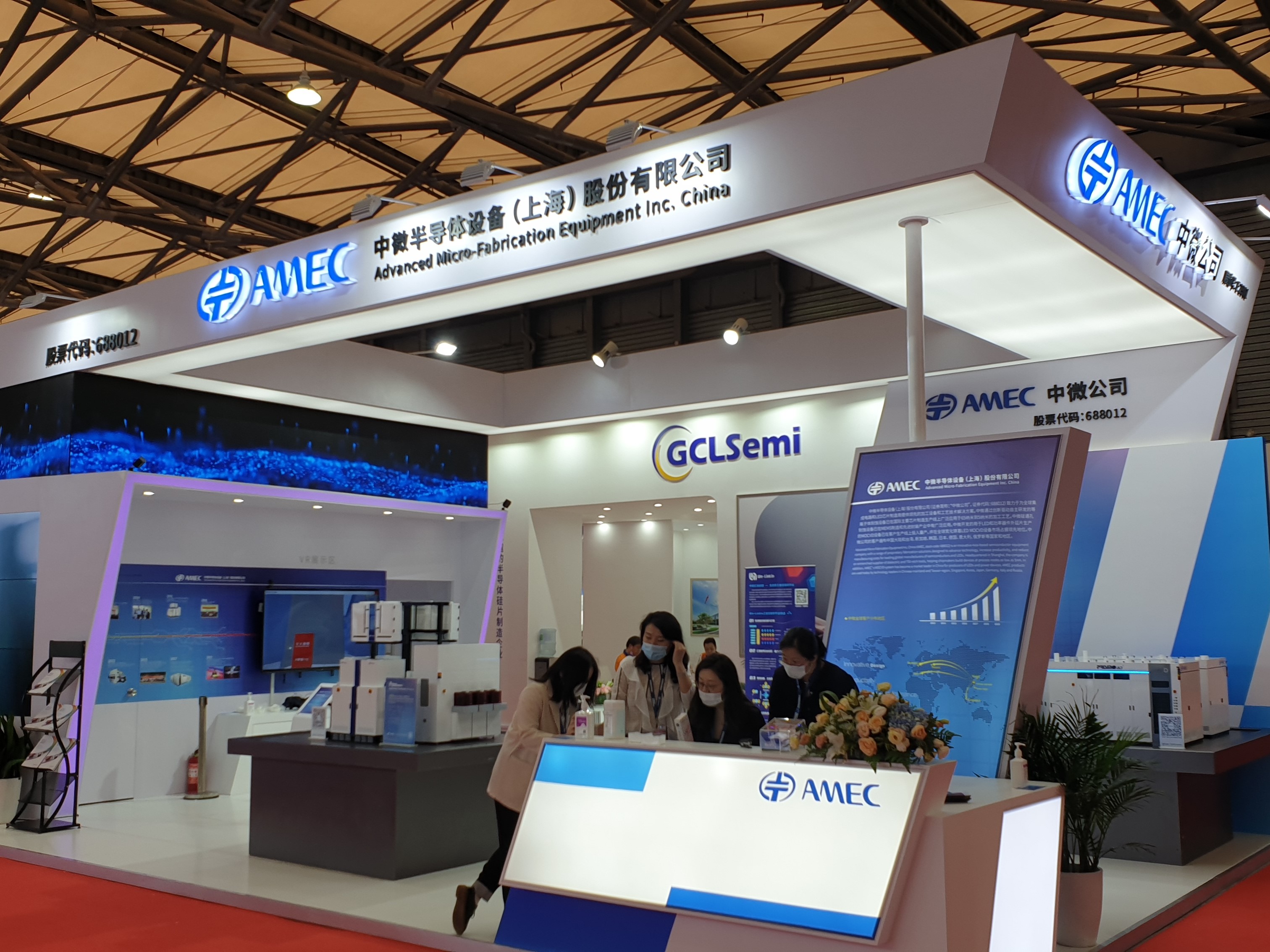 ► Since 2017, MOCVD devices have replaced etching equipment, becoming the business with the highest proportion (51%) in AMEC’s revenue structure.
► It is challenging for AMEC to take more market share in the quasi-monopolized global etching equipment market.
► AMEC may benefit from the development of SMIC, considering the foundry’s realization of mass-production of 14nm and raising funds to expand production capacity.

These days are critical for China’s fledgling semiconductor industry. The country’s top contract chipmaker SMIC (00981:HKEX, 688981:SH) is to be traded in the Star Market, a move that matches the absence of chip manufacturing in the A-share market. The Star Market was established to help high tech companies quickly raise capital. The China Securities Regulatory Commission (CSRC) has also been implementing convenience policies, such as the ‘registration-based’ IPO system, to support those companies.

AMEC (688012:SH), an etching equipment supplier, was among the first batch of companies listed in the Star Market in July 2019. Its stock price has increased by 817.20% since then.

The etching equipment is used during the chip manufacturing process, and foundries like TSMC, SMIC and UMC are all AMEC’s customers. 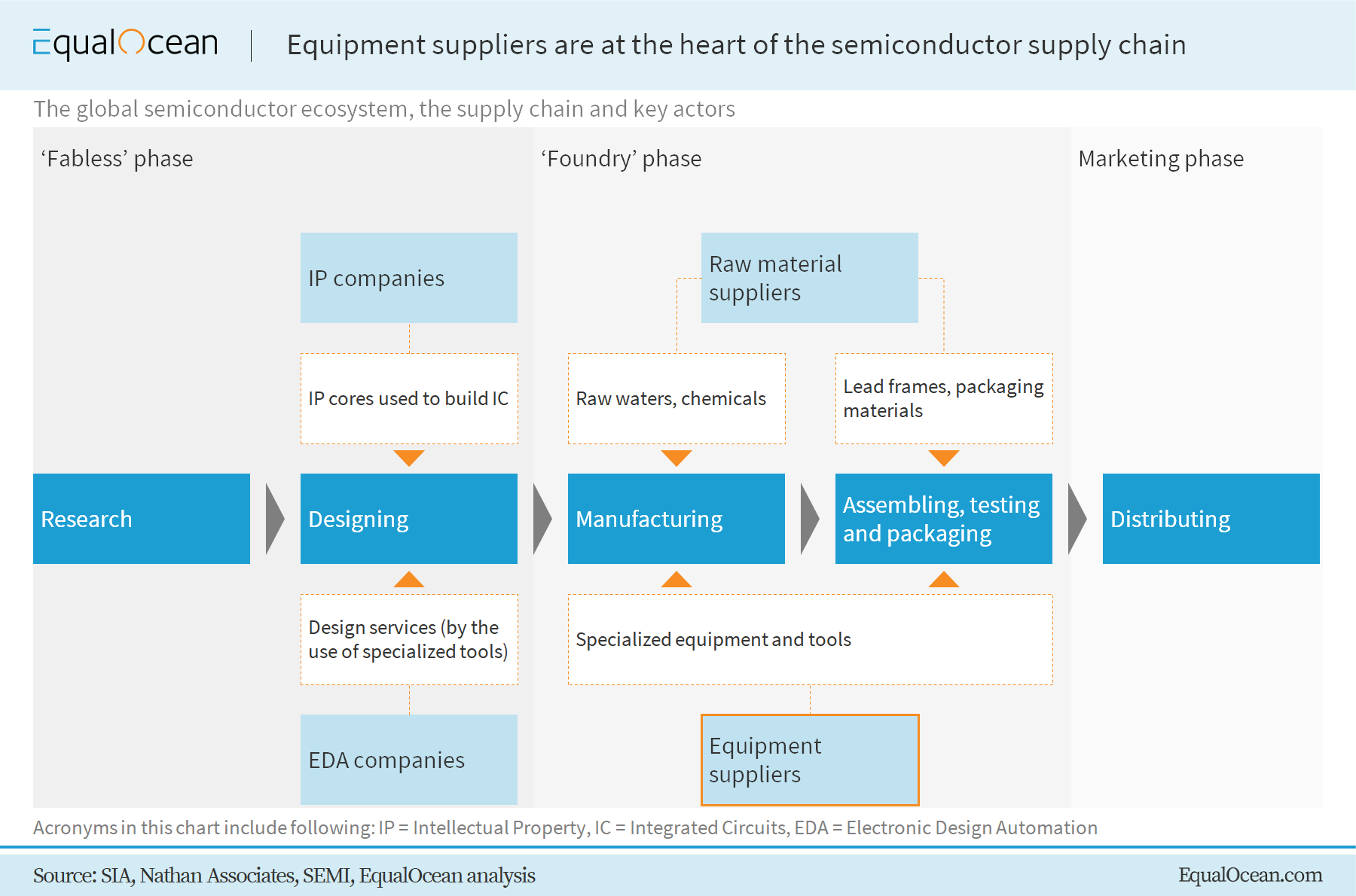 As revealed in the prospectus, AMEC accounts for about 1.4% of the global market, according to Gartner’s estimate on the market scale of etching equipment. The market share of the top 3 companies, including Lam Research (LRCX: NASDAQ), Tokyo Electron (8035:JP) and Applied Materials (AMAT:NASDAQ) had a combined value of 94% in 2017. High concentration and barriers, and the fast speed of technology development show that it is hard for AMEC to achieve more market share in this field.

The company thereby needs other growth drivers. After reviewing the revenue structure of the company, we have found that, since 2017, MOCVD devices have replaced the etching equipment, becoming the business with the highest proportion (51%) of AMEC’s total revenues. MOCVD is the most important equipment in LED manufacturing, and the purchase amount generally accounts for more than half of the total investment in the LED production line. 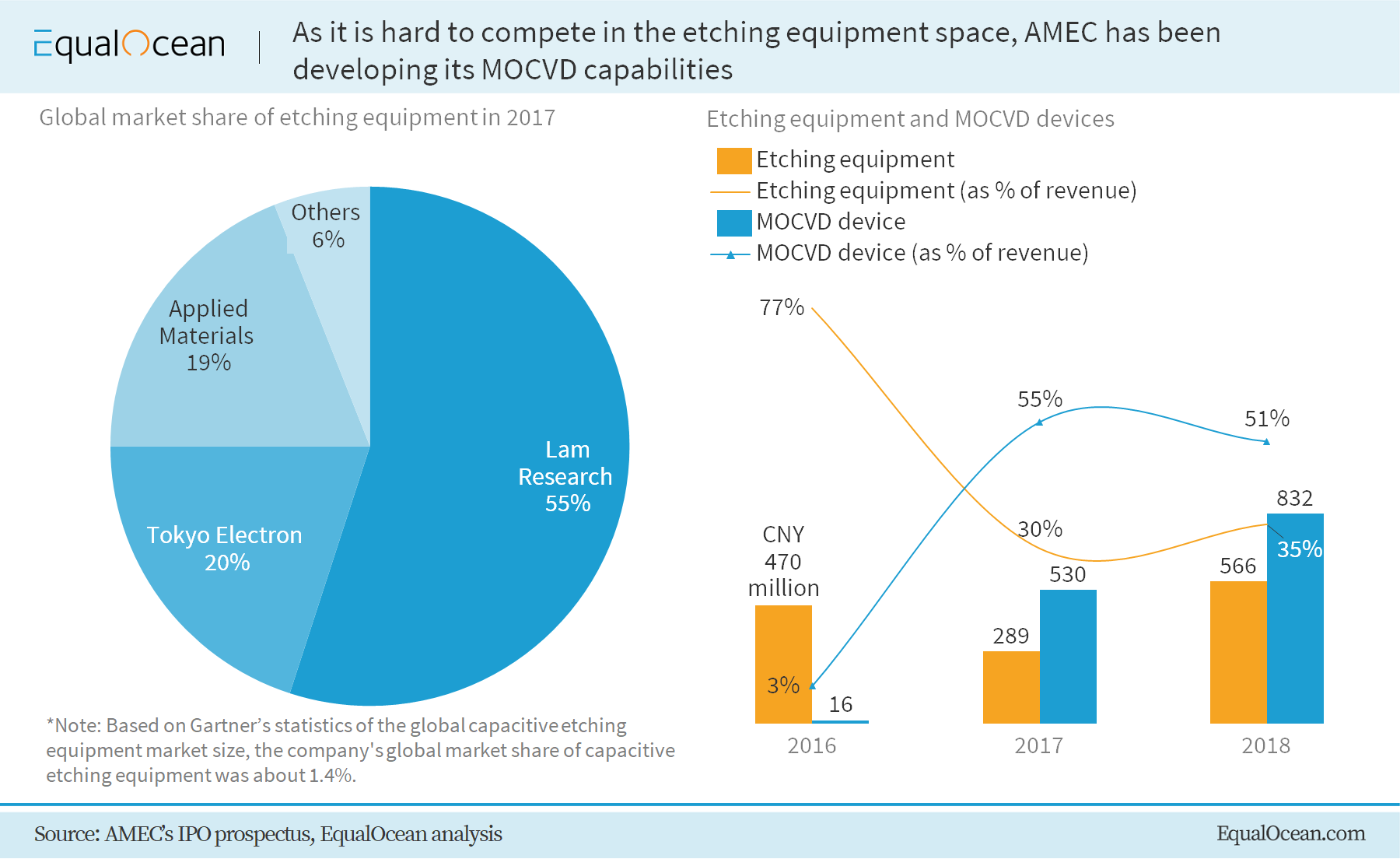 We talk about the two businesses separately in the next part.

Since 2017, AMEC's MOCVD has gradually entered this field. According to IHS Markit, in 2018, the company's MOCVD accounted for 41% of the new MOCVD for the GaN-based LEDs in the global market. Two other main players in this field globally are Veeco (VECO:NASDAQ) and Aixtron AG (AIXA:DE) 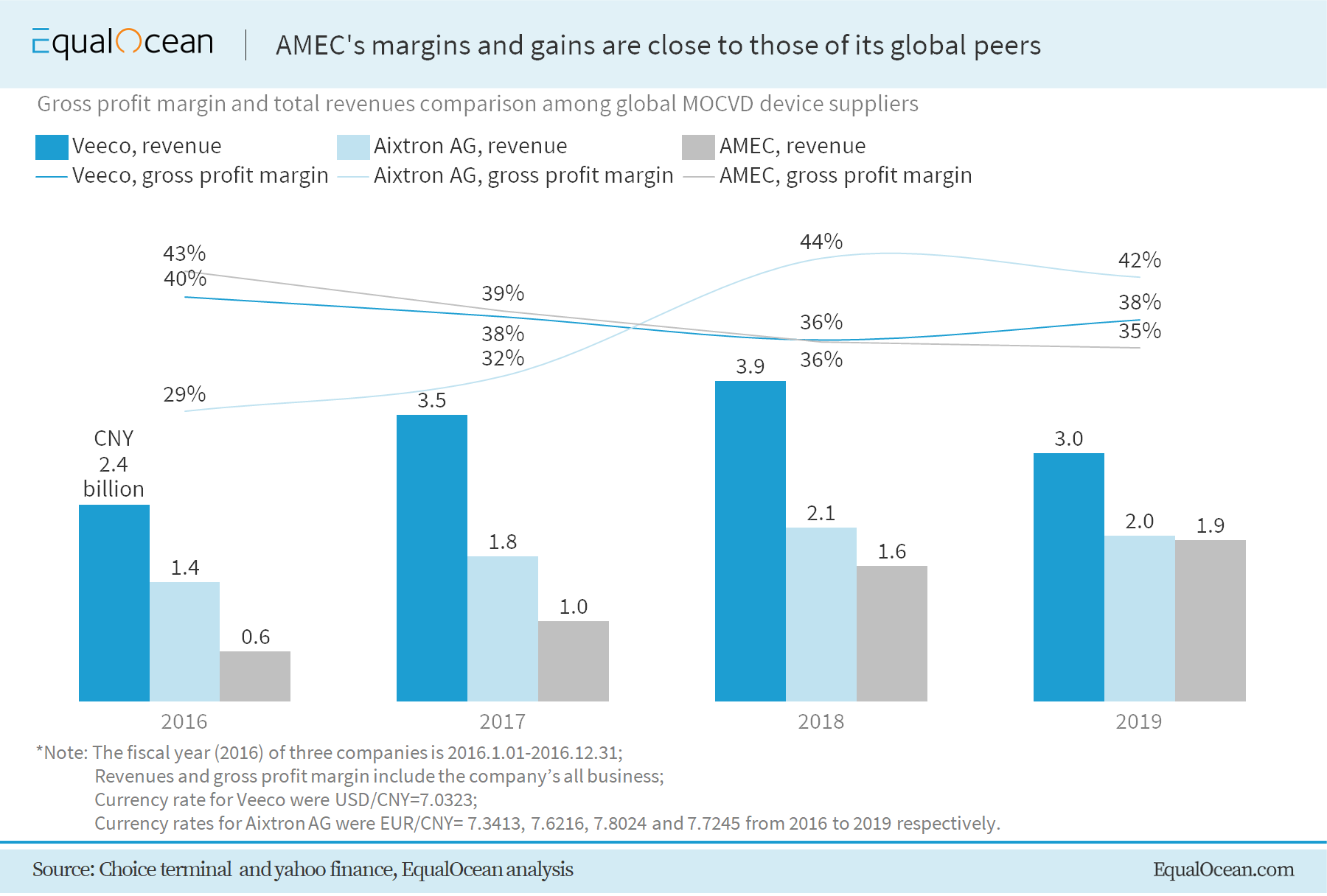 From the perspective of the LED industry, the new applications and technologies like Mini LED and Micro LED have countless advantages. This triggers Internet giants, including Apple and Samsung, to venture for their own hardware; the market scale of MOCVD is thereby very likely to increase.

In addition, the company is in the process of researching and developing next-generation products to meet etching demands on products including logic chips under 7nm, 1X nanometer DRAM and 3D NAND chips above 128 layers.

Though it has achieved progress, it is hard for AMEC to compete with overseas etching equipment suppliers.

The global etching equipment market has been dominated by three companies: Lam Research, Tokyo Electron and Applied Materials. There is no comparison between AMEC and those three giants in terms of total revenues. In addition, AMEC’s gross profit margin has been the lowest since 2017. From the chart, we can see that, in 2019, the gross profit margin for AMEC was 35%, about 10% lower than the highest.

In tech-heavy sectors, higher revenues typically mean higher investment in R&D. Those large enterprises have been in the industry for several years. For instance, Lam Research was founded in 1980 and can provide a full range of etching equipment, while AMEC was formed in 2004. Lower R&D expenditures, shorter history and higher barriers, all these factors show the impossibility of competing with overseas etching providers. 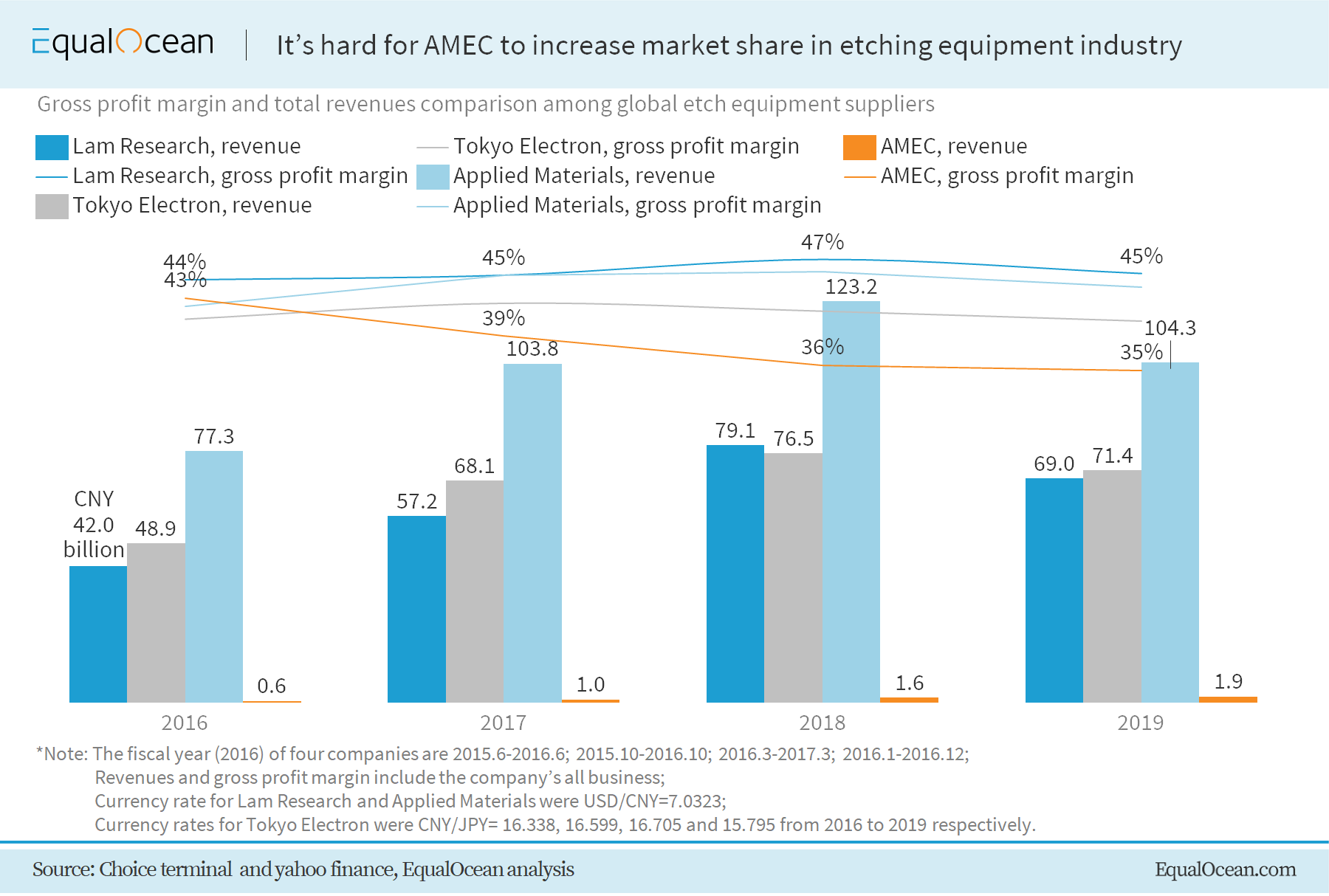 In such hard conditions, AMEC has achieved around 1.4% market share in the etching equipment field globally after the accumulation of over 10 years of experience.

Better than that, In the domestic etching market, according to two Chinese companies’ bidding results, Lam Research still accounts for over 50%, although AMEC’s share is higher compared with the global market. In terms of customers, we found that in 2016, SMIC was the largest client of the company, accounting for 38.11% of total revenues. In 2017, SMIC was the largest etching equipment buyer, at 11.16%, and revenues from HC Semitek were the highest, as 34.98% of the total. And in 2018, SMIC was out of AMEC’s top 5 customer list. 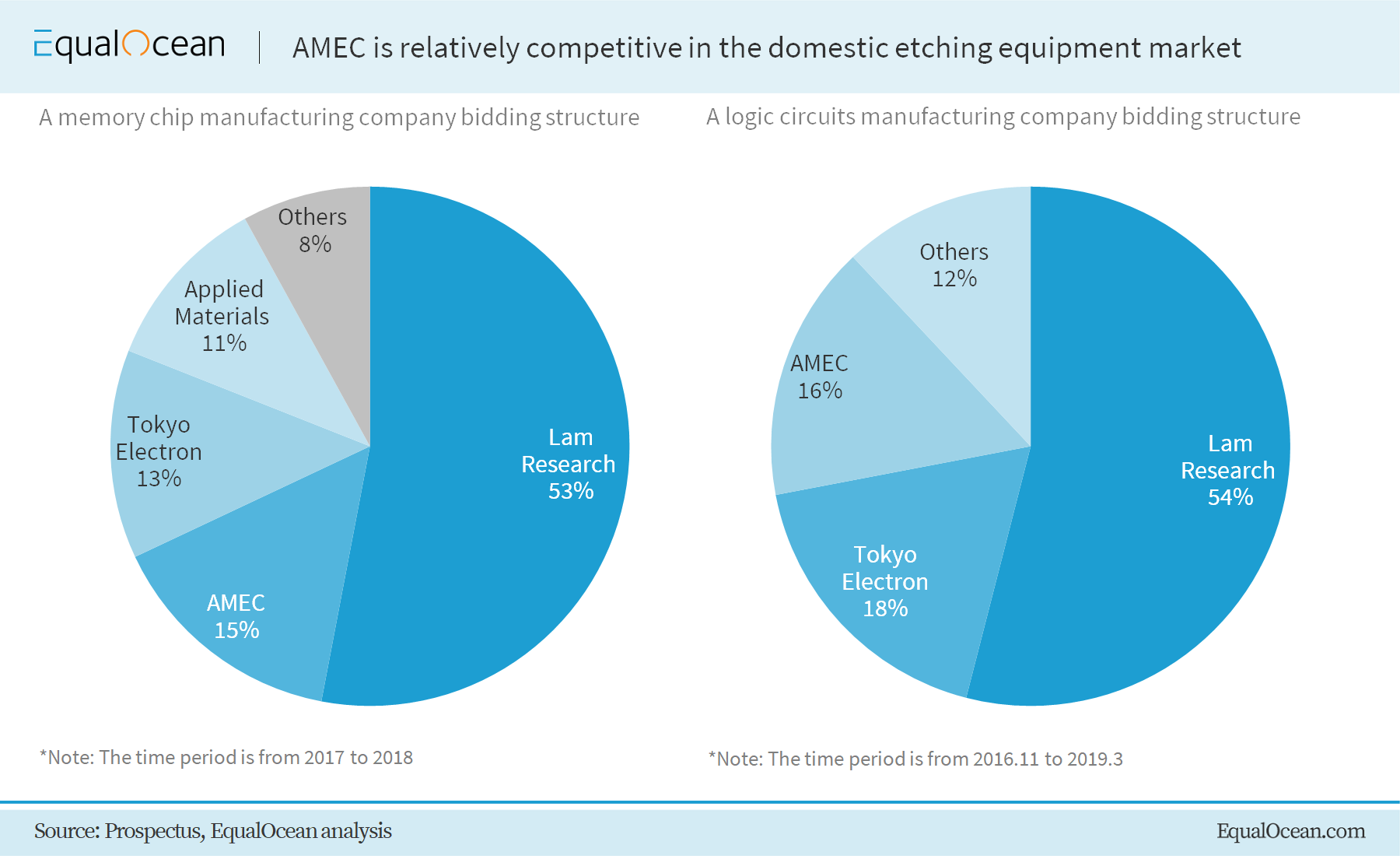 Considering the competitive landscape in the global etching market, turning into an MOCVD supplier or LED companies is a good choice. In addition, SMIC realized the mass-production of 14nm in 2019 and raised funds to invest in the factories, which means AMEC will probably achieve some orders from SMIC. To open the world market, AMEC must start by opening the domestic market.

With the development of technology like IoT, 5G and V2X boosting global demand for microelectronic equipment, there are many other fields that AMEC can potentially enter, including diffusion systems and photolithography equipment. Besides, Yin Zhiyao (尹志尧), the founder and chairman of AMEC said (in Chinese) that, they will explore core technologies in environmental protection, industrial Internet and other fields.

These steps can possibly lead to the firm's better market positioning, helping it to catch up with global rivals.

CONTACT US
Scan QR code to contact us for professional consulting services
Next article
COVID-19 and AI | Key Takeaways from Webinar 'AI in China: 2020 and Beyond'