Will East Money Be the ‘Chinese Charles Schwab’? 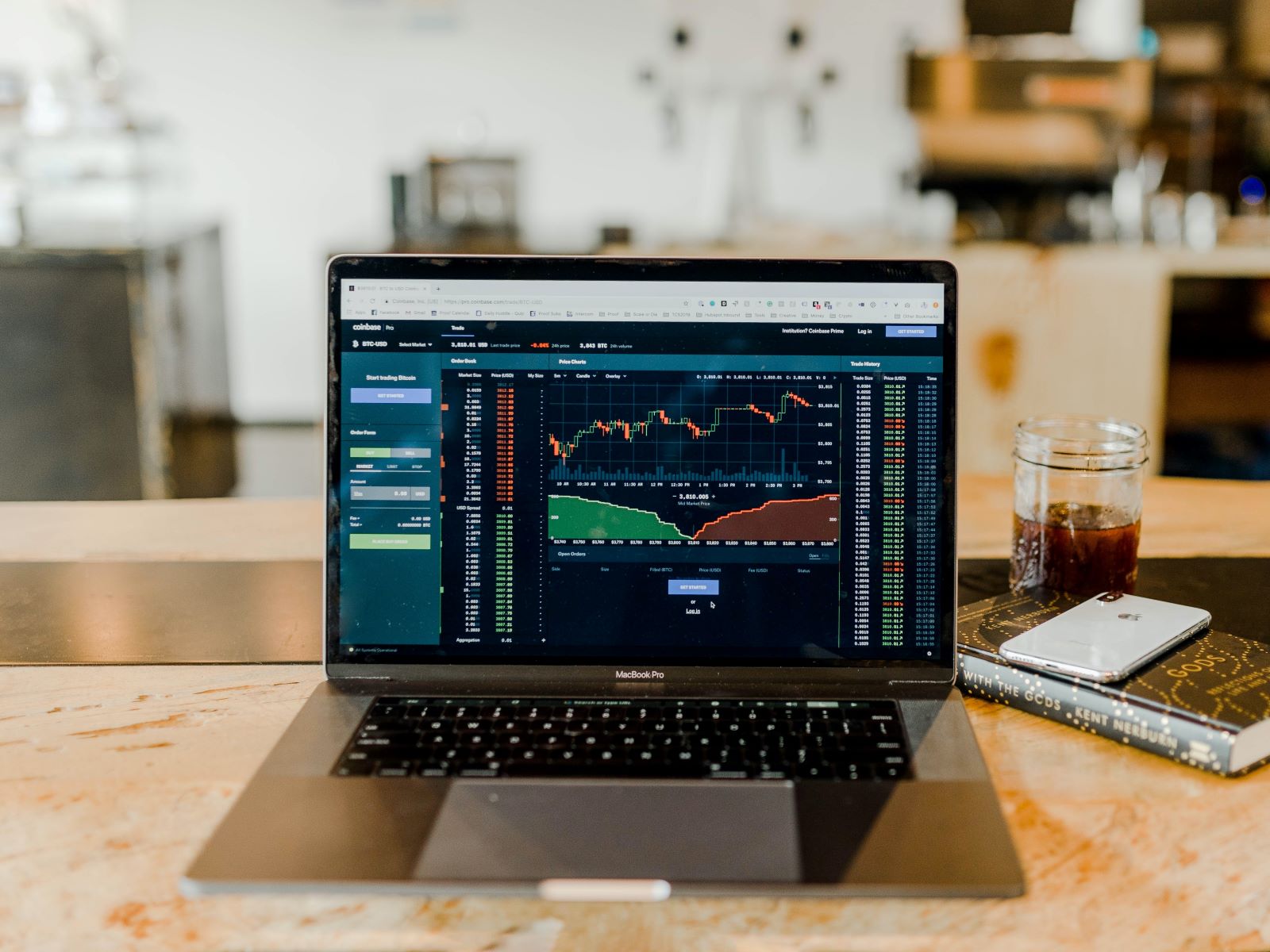 ► Securities business occupies over half its income, and now East Money is heading to the wealth management.

Always regarded as a profitable industry, finance remains a consistent talking point for many in the age of swift digital transformation. Finance-related business fields also attract influential eyes such as those of actors in media, data and IT services. After years of competition, leaders are standing out –East Money is now the largest Internet securities firm.

When we look back at East Money’s development path, it's clear that the firm’s strength was not evident at first. But after much transformation and expansion, this initial finance media has grown into a top finance institution, covering securities, information provision and more besides.

Established in 2005, East Money is younger than other Internet firms. No matter if it is compared to today’s Internet giants such as Tencent, established in 1998, or other finance service providers such as the leader of financial provider – i.e. Wind, established in 1994. But in the year of 2005, the number of Chinese netizens reached 111 million. Moreover, China’s stock market began a historic reformation in 2005, making that year a milestone. Although East Money entered the market later than others, the timing was right.

But at that time, large firms also paid attention to this opportunity and stepped into the finance media field. Its competitors included Sina, Sohu and NetEase; all could be regarded as top tier Internet firms in 2005. East Money made its first right choice, launching a stock forum and attracting users speedily. Together with the more comprehensive and professional finance information, these two strengths brought traffic. It took the first step on its development path. Nowadays, it’s the n.1 finance website in China for visits. The daily views of its website numbered (in Chinese) around 25.3 million.

Coming up to the year 2012, the company made another transformation. From 2008 to 2012, East Money’s revenues were from data service and advertisement. But in 2012, the competition in the financial data service reached a peak; similar products and prices made the players suffer a lot. East Money’s revenues from financial data reached their lowest point in 2012. Three existing roads were put on the table: reliance on financial data like Wind, or reliance on software services like stock software, or reliance on advertisement. Based on its traffic, East Money expanded the fourth way: fund consignment. In 2012, its Tiantian Fund got its fund sales license. Thereafter fund sales became an important source of revenue. In addition, the policy of promoting the application of e-commerce in finance and other industries pushed this leader’s business a lot. In 2015, Tiantian Fund became the leader in fund sales in China. 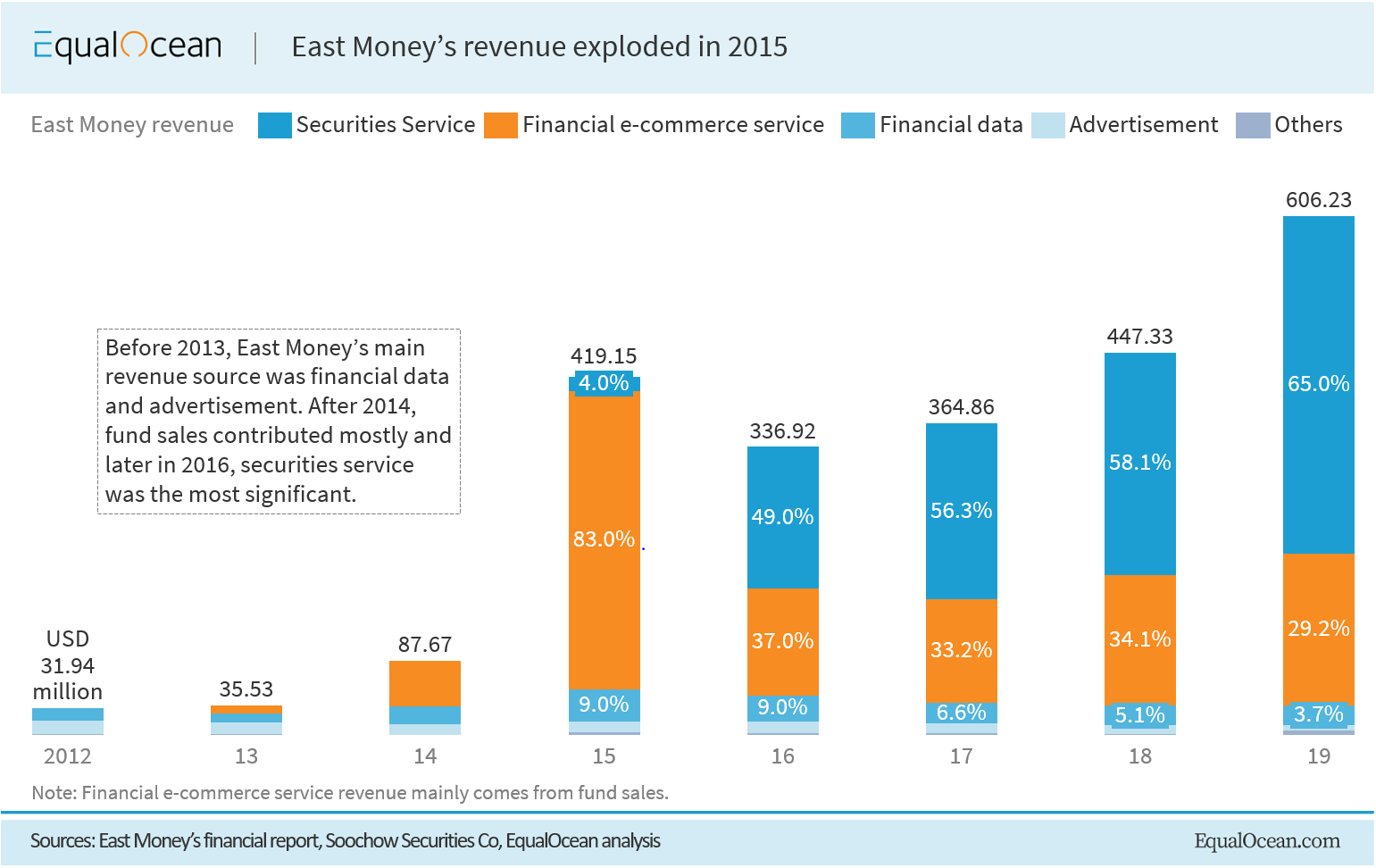 The second transformation also materialized in 2015. Fund sales mainly rely on traffic and the number of funds the platform selling. Led by Alipay, fintech companies in China began to compete for this market, and their traffic and expansion speed was too quick. Fund sales were not a long way to go and the area was becoming a red ocean. So East Money acquired Tibet Tongxin securities and got the license in the area of securities and futures. From 2016, securities accounted for 49% of its revenues and the percentage went up, year by year, until now.

In 2019, the firm acquired Zhongxin Insurance and issued its own funds. Its business-covering functions are the most comprehensive now.

The next Charles Schwab？

It is worth comparing the company to Charles Schwab. They both used low commission fees to attract large clients as the first expansion step and made full use of the Internet to grow online business. Later, they entered different verticals to continue their stories. Charles Schwab chose investment advisory, real estate, online ETFs and then acquired TD- Ameritrade to expand more. East Money’s choices were securities, data service, advertisement during its development path.

After the different choices, they both entered into the wealth management field in 2019. As China’s citizens demand for asset allocation is increasing, not only China’s finance firms, but also foreign incumbents are entering the wealth management arena. East Money’s strengths are also outstanding. Its net profit attributable to parent company owners’ was (in Chinese) CNY 874 million (USD 125.33 million), an increase of 126% year-on-year. Fund sales-based revenue increased by 120% year-on-year, revenue accounted for 38%, and revenue growth contribution reached 43%. Although East Money will face more competitive players in wealth management, it still come out as a top-tier winner in the end.