Ping An Bank: Highly-Recommended Banking Stock in the A-share Market

The company has been performing well… but the market doesn’t agree.

► The entire banking sector in Chinese stock market has been undervalued.
► The retail transformation and the Ping An Group’s financial ecosystem provides long-term fuel for Ping An Bank.
► Ping An Bank has been growing fast in recent years, with better asset quality and capital management.

The stock price of Ping An Bank (PAB, 000001:SZ) experienced two peaks this year. After the financial result for the first quarter was released on April 21, the stock price of PAB  went up for a while, but fell back soon. The second wave came from the widespread view that the ‘bank sector is undervalued,’ with a large number of investors buying. But the trend ended soon as well, in just a week.

The favorable performances in the first quarter of 2020 and 2019 for the company didn’t offer capital gains on the stock market, which was supposed to happen. This article will focus on the key price drivers for Ping An Bank by analyzing its business strategies and asset structure through the financial performances, to discuss why the company is undervalued.

What differentiates PAB from other joint-stock commercial banks is its robust support of PingAn Group (601318:SH), one of the largest and comprehensively-licensed financial conglomerates in China, and its leading retail business, which provides more flexibility amid the downturn of the economy. PAB has a highly-concentrated capital structure, with 57.90% of the shares held by PA Group, the banking sector and other financial divisions that realize synergies in business developments. The entire Ping An financial ecosystem supports PAB in retail transformation and provides sustainable endogenous growth.

The downward pressure on global interest rates has been compressing the profitability for banks and some financial institutions; it has become a pivotal issue for them. Since PAB’s retail-focus strategy has been established, the personal lending revenue of PAB has counted most in its revenues and net profits with the highest yields contribution. 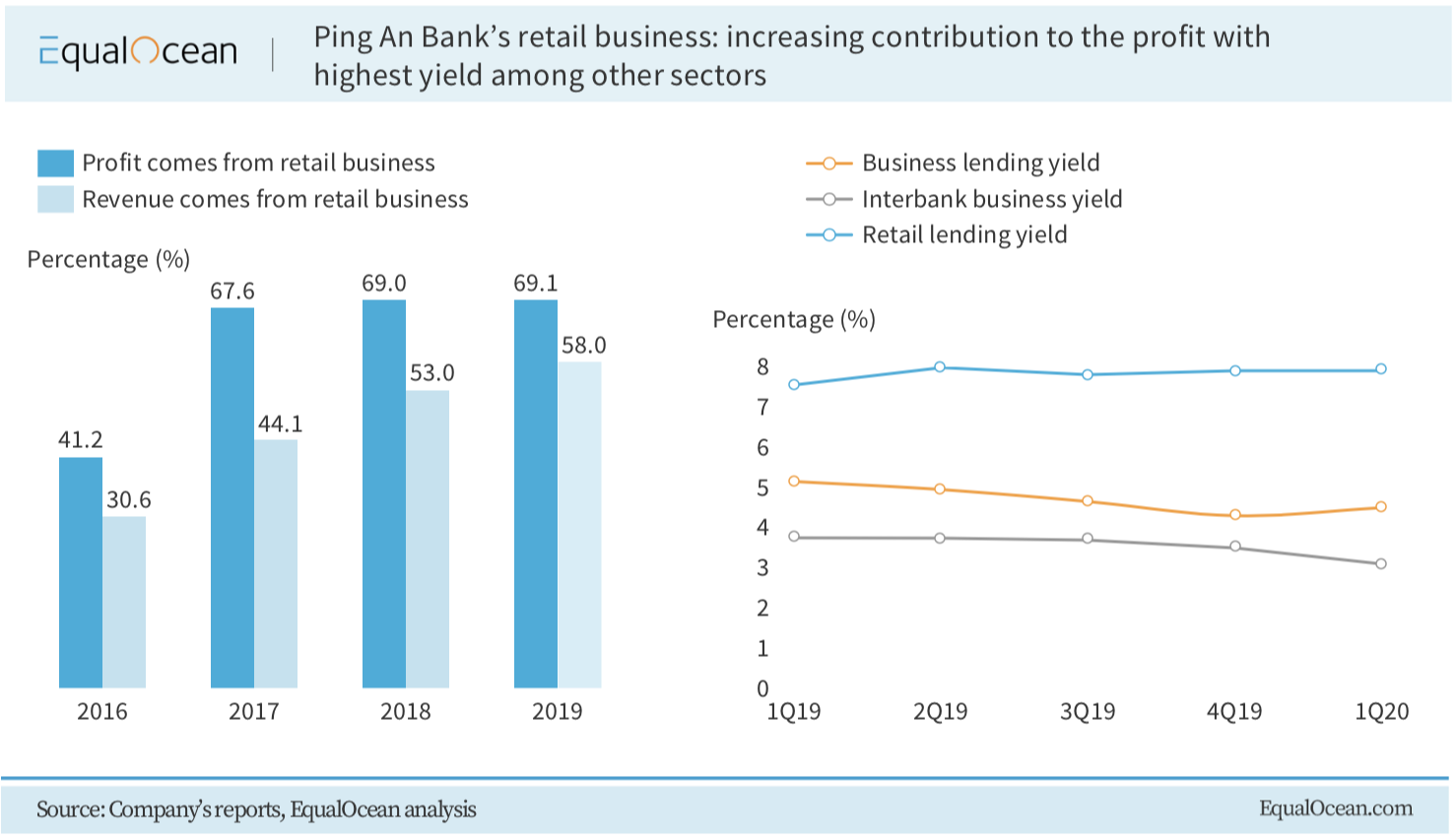 From the income side, we can see the revenue in 2019 increased by 18%, to CNY 137.90 billion, with interest income rising 20%, which contributes to the growth of the income. From the asset side, total loan counts most in interest-bearing assets, with an increase of 9%, the figure recorded being CNY 2 trillion, contributing an income of CNY 133.20 billion, with a yield of 6.58%. All other assets have yielded less than 3%. On the liability side, the deposits count most in interest-bearing liabilities with an increase of 11%, the figure recorded CNY 2.20 trillion, responsible for the expenses of CNY 56 billion, which is a 1% decrease.

The income increase reflected in the asset side while a decrease in cost shows in the debt side, marks the success in reorganization in business structure and strategies. The cost-efficient business-personal loan is taking up more share of PAB’s revenue scale, pushing the net interest margin (NIM) to rise by 27 bp. The net income increased by 14.6% in the first quarter of 2020, even under the pandemic, significantly exceeding the market expectation.

From a long-term view, the beneficial effects of optimization on the business-level will finally emerge.

Asset structure: from troubled to outperformed

The banking industry has its own characteristics. First, banks record profit up-front with the associated risks reared, which means the financial statements for banks are not fully reliable for the feasibility in profit adjustments to some extent. Second, supervision in the Chinese banking industry is much stricter than in the west, which causes bank stocks to hover at low prices all the time.

The two factors brought about a phenomenon called the ‘low-valuation trap’ – the low-priced bank stocks might be worth much more than they appear. Here we will dissect the PAB’s financial statements across six dimensions, based on the CAMELS rating system, an international rating system that bank supervisory authorities use in order to rate financial institutions according to six factors represented by its acronym. From this we can conclude that PAB has been optimizing its asset structure for years, graduating from a ‘C-level student’ to an ‘all-A student.’

The term means the level of the capital can cover its risk-weighted asset, representing the solvency capability the banks have on large outstanding lending.

From the information provided in the financial result for the first quarter, the profit growth was higher than the asset growth under the high NIM, which pushed up the capital ratio. The core tier-1 capital rate and the tier -1 capital rate of PAB increased, from 8.54% and 9.39% in 2018 to 9.20% and 11.65% at the end of Q1 2020, which highly surpassed the supervision requirements by China Banking and Insurance Regulatory Commission (CBIRS) of 7.50% and 8.50%, marking sufficient capital stock. Therefore we believe  PAB will have no need to replenish capital in the short future. The structure is reflected as healthy.

Loan coverage ratio is another crucial point to focus, the higher means the higher asset quality. What is more, when banks put aside a lower coverage ratio, more profit can be released. NPL Provision coverage ratio for loans 90 days past due strengthened from 105.67% in 2017, to 222.89% in 2019 and 257.77% in 201Q, with optimization of over 100% in the past two years and 35% in recent three months. The corporate NPL ratio fell 48bp QoQ to 1.81%, also representing an increasing asset quality and risk-resistance capacity.

The efficiency of the management will be a precondition for banks’ long-term growth. As we mentioned in the last part, the management team of PAB had made wise decisions to provide sustainable fuel for the company. Here we can compare the NPL ratio and the loan coverage ratio with competitors.

When time back to 2017, PAB’s performance could not be considered good among all the players in mid-sized public commercial banks. Industrial Bank was the spotlight in 2017, significantly outperforming PAB and Shanghai Pudong Development Bank (SPDB) in all dimensions. In 2019, PAB finally made all these figures close to Industrial Bank. In the three years, PAB showed marked progress – but the outlook had slightly backslid for Industrial Bank.

China Merchants Bank has been in the leading position since 2017, significantly outperforming other banks, and still doing better than PAB now. However, when considering the improvements, PAB has made even bigger jumps. That’s also why this article views PAB as a black horse with higher growth potential, even in the short run.

This factor measures the sustainability of profit growth for banks, by looking into some income situation over a period of time. We analyze the cost situation here.

Compared to Q1 2019, the deposit cost went down by 10 bp in 20Q1, which most contributed by the corporate deposits interest rate. The interest-bearing debt cost decreased by 10 bp. The entire debt cost run down 1 bp compared to the end of 2019. The average personal loan yield in 2020 recorded 7.82%, jumping up 8 bp in three months. NIM rose by 27 bp in 2019 but, affected by the pandemic, it slightly narrowed 2 bp back to 2.60% in the first quarter of 2020. Overall, the robust performances under the pandemic for 20Q1 still surprised the market.

On the other hand, the high-interest rate of personal lending maintains the high NIM, which also means a risk for PAB, which will be a test for its risk management ability in the future.

The liquidity for commercial bank focus on the deposit situation, dependency on the fund borrowing and liquid asset proportions. Here we look at the liquidity coverage ratio (LCR) that measures the short-term liquidity, and the net stable funding ratio (NSFR) that measures a relatively long period of time, both of which are required by CBIRS to maintain over 100%. The 100% represents a high capacity to cash out the assets under certain stress scenarios. The LCR for PAB reported 98.35% in 2017, but optimized in the next two years, calculated as 139.17% and 143.02%. The NSFR for PAB reported 111.42% in 2018 and 109.03% in 2019. Both ratios indicated high liquidity.

Banks are always highly-related to the market condition. Here we discuss the resistance of the banks on the market risk.

The five years’ monthly beta for PAB is 1.01, higher than the main players in the banking sector, as the figures for China Merchants Bank of 0.8, Industrial Bank of 0.72, China Everbright Bank of 0.68, Bank of Ningbo of 0.91, and SPDB of 0.38, which are all less than 1. This might be the only thing we have to pay attention to, to some extent.

However, the performance of PAB in the pandemic showed its resistance to the downturn of the economy.

As we discuss above, PAB should be priced much higher than now, based on its high growth and the discovered highlights under the seemingly-normal financial statements.