The Story of Kingsoft, a ‘Chinese Microsoft’

When looking at Kingsoft’s story, one finds oneself before a miniature version of the Chinese software development history as a whole. 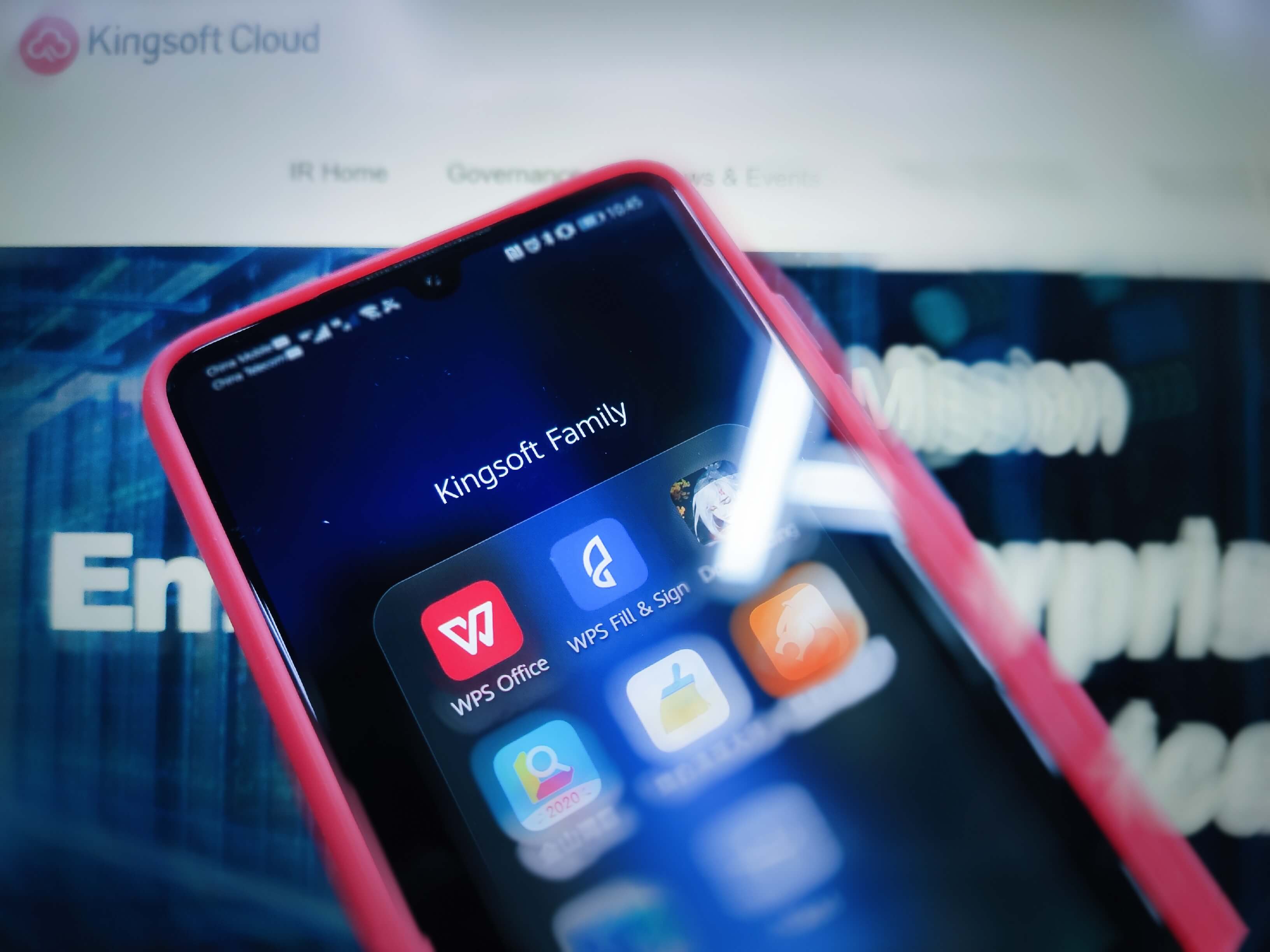 In the early years, the software industry’s prosperity relied on the penetration rate of personal computers (PCs). While Apple started to sell PCs in the United States during the 1970s, PCs only appeared almost a decade later in China. Prior to the 1980s, there was no software development for PCs in mainland China. Though PCs were as expensive as one Chinese household’s annual earnings in the late 1980s, the presence of the devices precipitated the birth of the software industry there. In 1988, Kingsoft was founded in Shenzhen.

As one of the oldest software companies in China, Kingsoft (03888:HKEX) plays a key role in software development in the PRC. The company made its name known to the public through the office software Word Processing System 1.0 (WPS 1.0), developed by the founder Qiu Bojun (求伯君) in 1989. After thirty years, Kingsoft has grown to a giant family composed of different types of software companies: Cheetah Mobile (CMCM:NYSE), Kingsoft Office (688111:SH), Seasun Entertainment and Kingsoft Cloud (KC:NASDAQ). Below, we describe key phases of the company’s development, touching on its corporate strategy shift.

Crowned the Chinese No.1 Programmer, Qiu Bojun is the father of WPS 1.0, which upgraded to WPS Office (Word, Presentation, Spreadsheet). There is a legendary story saying that he coded the whole of WPS 1.0 in a Shenzhen hotel within a year ­– a well-known anecdote in the Chinese IT world. Undeniably, he set a solid foundation for Kingsoft in China. Qiu served as CEO at Kingsoft for the first ten years of the company.

The company was originally an echo of Hong Kong Kingsun company in mainland China. Kingsun was a PC manufacturing company owned by Zhang Xuanlong, namely the Godfather of Zhongguancun. While Hong Kong Kingsun was merged with Founder Group (00418:HKEX) in 1994, Kingsoft became independent and set the headquarters in Beijing, which is a Hong Kong-listed entity.

Before Microsoft Office (MSO) broke into China’s market, Kingsoft-developed WPS (Word Processing System) had swallowed 90% of the market share in China during the early 1990s. Prior to WPS, China’s virtual world development had lagged behind the West and document processing software in the Chinese language was a blank. WPS filled the empty space and made Kingsoft a great success.

As the software market grew rapidly in the 1990s, the importance of protecting intellectual properties failed to catch up with the industry development. Software piracy had nearly crushed the budding software industry in China when floppy disks and CDs made the piracy market available. This piracy caused great losses to software developers and urged them to speed up development to run ahead of pirated products. Plus, with Microsoft Office’s presence in China, WPS’ market share sharply shrank, and revenue during the mid-1990s slumped.

Lei Jun, who was later the CEO and currently the Chairman of Kingsoft Software and Xiaomi Group (01810:HKEX), joined Kingsoft in 1992 and he led most Kingsoft projects at the time. Shortly after his joining, MSO bundled with Windows 95 started to take over the text processing market and Kingsoft and other China’s software companies were forced to compete with Microsoft face-to-face.

Overshadowed by the aggressive competitor, Kingsoft bet on its Pango Office kit heavily and released the product in 1996 to fight against MSO. However, the product failed to meet the target – Kingsoft fell in a muddy puddle and struggled towards what seemed to be a last breath. Three years of development, millions of yuan burned (at the time, CNY 200,000 could buy a 2B1B apartment in Beijing), the massive input dragged Kingsoft to the edge of bankruptcy – Pango sold fewer than 10,000 kits. In Lei’s biography, he described the dark period, “In a year, I lost my dreams.”

To improve the situation, Kingsoft successively developed a series of products, from tool software to PC games: dictionary product iciba, antivirus software Kingsoft Antivirus, game Sword Heroes Fate series and so on. Meanwhile, WPS as a flagship product was upgraded to WPS 97. However, the product gained some market share – but it was far from its peak. Adding the damage from pirated software, the product release failed to bring the company back to its former heights.

At the same time, Qiu had gradually eased away from the manager role of Kingsoft during the late 1990s, and Lei Jun stepped up to be the general manager.

In 1998, Lenovo invested USD 4.5 million in Kingsoft. At the same time, Lei Jun was assigned the general manager, and Qiu intended to leave the power center. Lei transited from a software development engineer to a corporate management role and started his service until Kingsoft’s IPO in Hong King Exchange. Qiu set WPS as the foundation of Kingsoft’s business and Lei diversified the tone of the foundation – office software, gaming and cloud services.

In 1999, Lei launched the Red Genuine Storm (RGS) strategy, advocating for using genuine software product, and created joyo.com, one of the earliest e-commerce marketplaces in China.

The RGS served for the purpose to strike software piracy market. In 1998, PC’s penetration rate in China was 8.9 per 1,000 people, while the US the number is 568.6. Given such a low PC penetration rate, the prevalence of pirated software severely crashed China’s software companies’ profitability. From an interview with Lei, he disclosed that there were over 5 million iciba dictionary users but the company had sold only 60 thousand genuine copies in the 1990s.

Spun off from Kingsoft, Joyo.com was the most successful e-commerce platform in China before Taobao’s rise. Joyo.com started by mimicking Amazon: limited varieties of SKUs but best sellers with a price advantage featured. The strategy succeeded initially but it was easy for followers to copy. At the time, other China’s e-commerce companies like 8848 and Dangdang (DANG:NY) swiftly adopted similar strategy and the competition turned white-hot. In the early days, China’s Internet scalers were money-eating machines: if you want to scale, burn cash.

The money burning game did not last long. Joyo.com became the M&A target of Amazon when the American e-commerce giant touched down in the Chinese market in 2004. The site was acquired by Amazon at USD 75 million for 80% of shares in 2004, one year prior to the release of Kingsoft’s flagship product WPS 2005.

WPS has been upgraded four times – WPS 2005 was an early milestone in its development. Lei led the re-launch of WPS and WPS 2005 was selected in China’s National 863 Program (see FT’s coverage on the Program). The new version of WPS has a similar user interface to MSO, which lowers the conversion cost for users to switch between WPS and MSO. Instead of targeting the individual market, WPS initially eyed enterprises, government and overseas clients and then extended its reach to consumer markets.

In the same year WPS 2005 released, Kingsoft established the overseas joint venture Kingsoft Japan and started to promote WPS’ Japanese version. Comparing MSO’s price, WPS is in an advantageous position, since it can satisfy document processing needs. Along with the publication of free versions for individual users, WPS started to regain its Chinese market share and the scale yielded a foundation for Kingsoft Office (688111:SH) to spin off and go public in 2019.

The first online version of SHF was launched in 2003 and the popularity brought its footprint to Southeast Asia, where Kingsoft set up its Malaysian arm in 2008. SHF to Chinese resembles Final Fantasy to Americans, and the game series even fostered a subculture of its own. The game’s massive fan foundation led to good-looking financials for Seasun, the owner of SHF, and for the parent company Kingsoft. 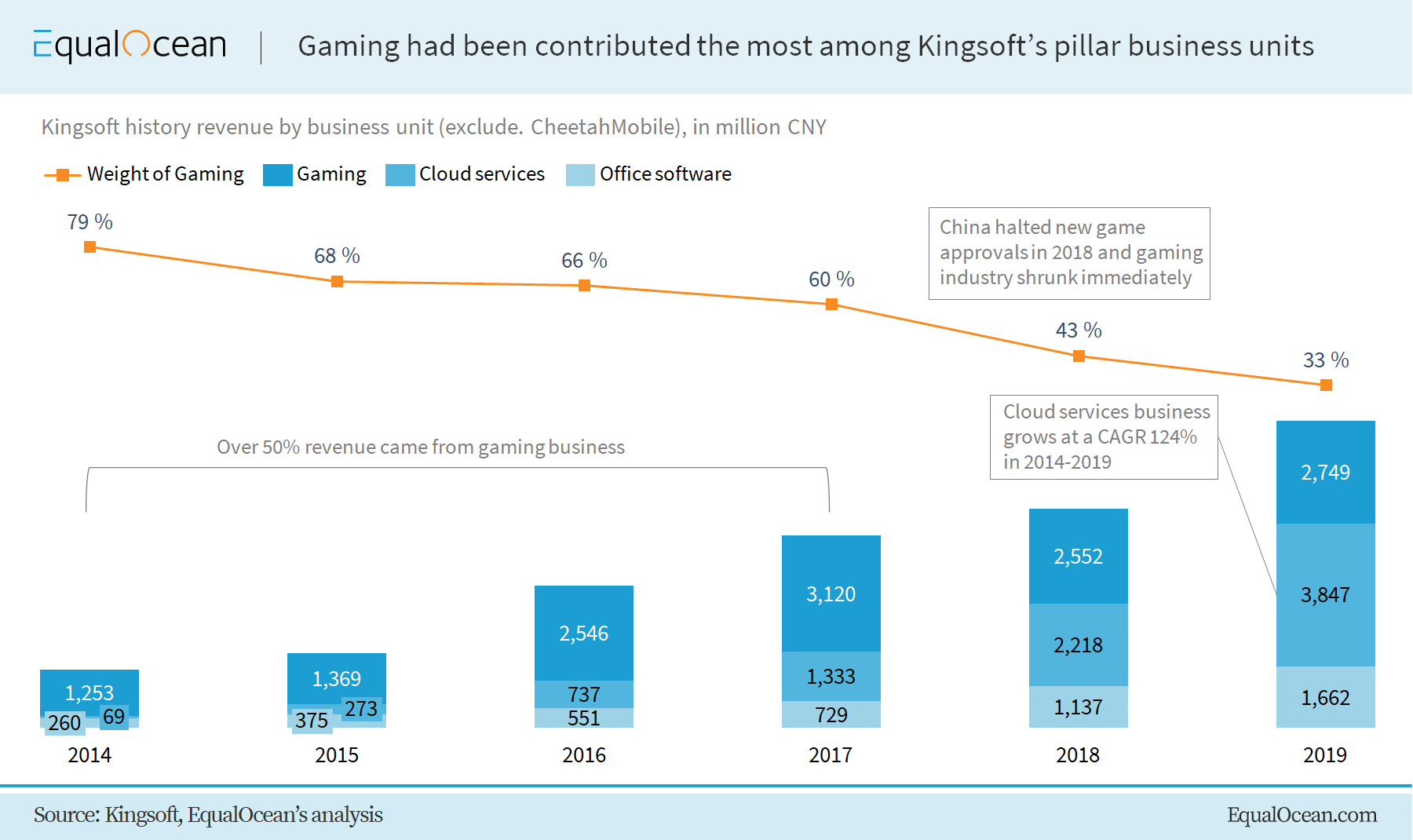 In 2018, the gaming industry in China was impacted by the ‘Green Channel’ regulation, as the regulator halted new game approvals and pre-existing games’ situation was exacerbated as well. The gaming segment of Kingsoft, Seasun’s revenue declined immediately to CNY 2.6 billion in 2018 from its peak CNY 3.1 billion in 2017 and recovered slightly in the following year – but 2017 is still the best year of Seasun.

company after serving as the CEO for nine years. Fu Sheng (傅盛), the successor of Lei replaced Lei’s role and he opened up the mobile world for Kingsoft.

Lei returned to Kingsoft in 2011 while chairing the newly established Xiaomi Group. In the 2010s, Kingsoft started to yield more power to its subsidiaries and joint ventures as well as promoting the young blood. Kingsoft descended Kingsoft Office in 2011, which went public on Shanghai’s Star Market in 2019; Seasun was spun off in 2012 and its Gen-Y CEO Guo Weiwei now serves as the SVP of Kingsoft; Kingsoft Cloud was derived in 2012 and it is currently listed on Nasdaq.

From the recent ‘Kingsoft family’ members’ IPOs, cloud and Software-as-a-Service seem to be the new directions for the ‘Chinese Microsoft.’ However, compared to Microsoft, Kingsoft has a larger presence in some of the promising areas of its business map. For one, Kingsoft’s Seasun, which many call the ‘Chinese Blizzard,’ has lately been boosting its capabilities in online gaming, stealing users from the likes of Tencent and NetEase.

CONTACT US
Scan QR code to contact us for professional consulting services
Next article
Ping An Bank: Highly-Recommended Banking Stock in the A-share Market