We initiated coverage of Li Auto (LI:NASDAQ) with a Buy recommendation and a December 2020 Price Target of USD 22.9 per share. 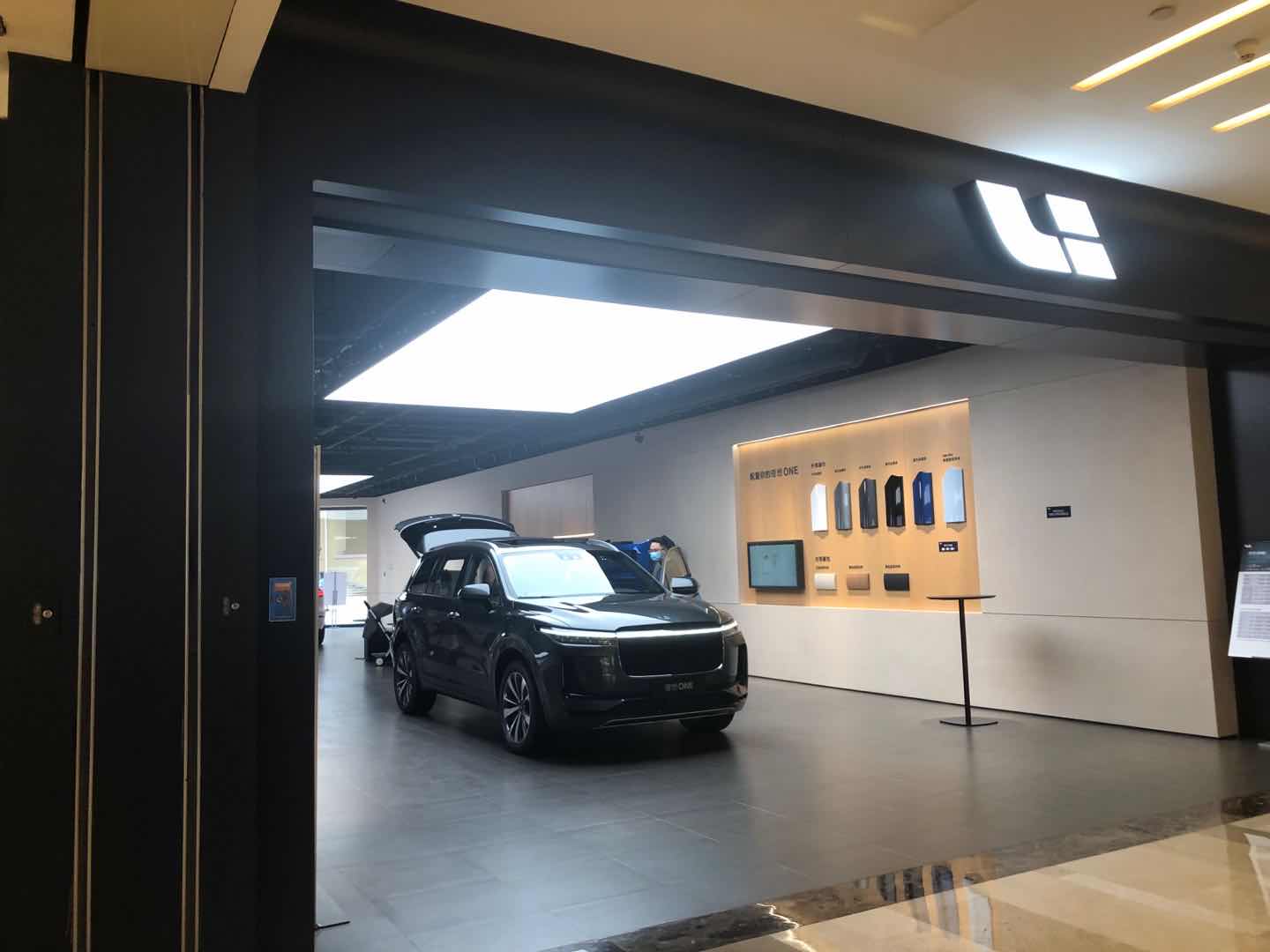 We initiated coverage of Li Auto (LI:NASDAQ) with a Buy recommendation and a December 2020 Price Target of USD 22.9 per share. Given the recent hype in investing in EVs and Li Auto's good financial performance, we expect to see its price rise on its first trading day.

We used a blend of a 2024-based Price-to-Sales (PS), Price-to-Earnings (PE) and EV/EBITDAP-based analysis. Li Auto, the company behind Chinese electric vehicle (EV) brand Leading Ideal, has filed for a Nasdaq IPO to raise up to USD 855 million. It will likely be the second Chinese EV ‘emerging force’ to trade on the US market after NIO, which was listed on the NYSE in September 2018.

We are optimistic about China's New Energy Vehicle (NEV) market, driven by government support, improving infrastructure along with the rise of local Chinese brands.

On top of that, Li Auto's unique value proposition suits the massive, burgeoning and developing market, and will give it an edge over other BEV competitors by freeing customers from high battery prices and limited charging infrastructure. Li Auto adopts EREV technology rather than the BEV technology that most EV startups do. The unconventional technology can not only save the company a great fortune on battery expenses but also alleviate dependency on charging piles in short-term.

Mass-produced car fleets pave the way to the upcoming AV competition. Li Auto has been able to pick up significant speed, reaching 10,000 car deliveries by far. Those running cars will serve as the best data collectors/processors for its AV research. However, we remained concerned about the firm's deliverable abilities in L4 research, given the challenges the industry facing and fierce competition.

A direct sales model offers a better user experience. Abandoning distributors and providing a direct service to customers has changed the way customers purchase cars and become the major choice of China’s new generation of EV makers like NIO, WM Motor, and Xpeng.

Superior cash flow management. Li Auto is burning money way slower than its competitor NIO and sits on top of CNY 1,197.3 million net cash (including restricted cash) as of December 31, 2019, thanks to management's keen ability to manage cash flows. The company has recorded a negative operating cash flow of CNY 63 million as of March 31, 2020, a way better case compared to what NIO had before the IPO (minus CNY 4.6 billion CFO in 2017).

On the financial point, we project LI to turn profitable in 2023 with exposed to fewer balance risks as compared to NIO.

EREVs may be a short cut, but it will be hard to resist BEVs in the long term. EREV is not the mainstream in the NEV industry, which in the long term might affect the company’s profitability as well as being exposed by a lack of supportive government policies (e.g., more strict license plate in tier-one cities as Beijing compared to EVs) if it fails to transform to become fully BEV in the coming years.

Unclear product pipeline. We have limited knowledge of Li's ongoing car model projects. The company currently depends on revenues generated from one single model of vehicle, the Li Auto.

Born to be different

EREV technology solves ‘range anxiety’ and affordability at one time. Among the four leading EV players NLXW (NIO, Li Auto, Xpeng and WM) in China, Li Auto went down an unconventional road that set it apart from all its peers. The company is the first Chinese startup to commercialize Extended-Range Electric Vehicles (EREVs), which requires a much smaller battery pack than battery-electric vehicles (BEVs) do.

The first greatest merit of a smaller battery pack is the lower cost. The battery system takes up 50% of the total cost of an EV. The high cost makes it very hard for manufacturers to control the selling price. Take NIO, for example, its ES8 model prices at CNY 468,000 to CNY 518,000 after subsidy. In comparison, Li Auto’s EREV technology saves customers over CNY 100,000 with a battery pack half the size, while ensuring a longer range than BEVs. 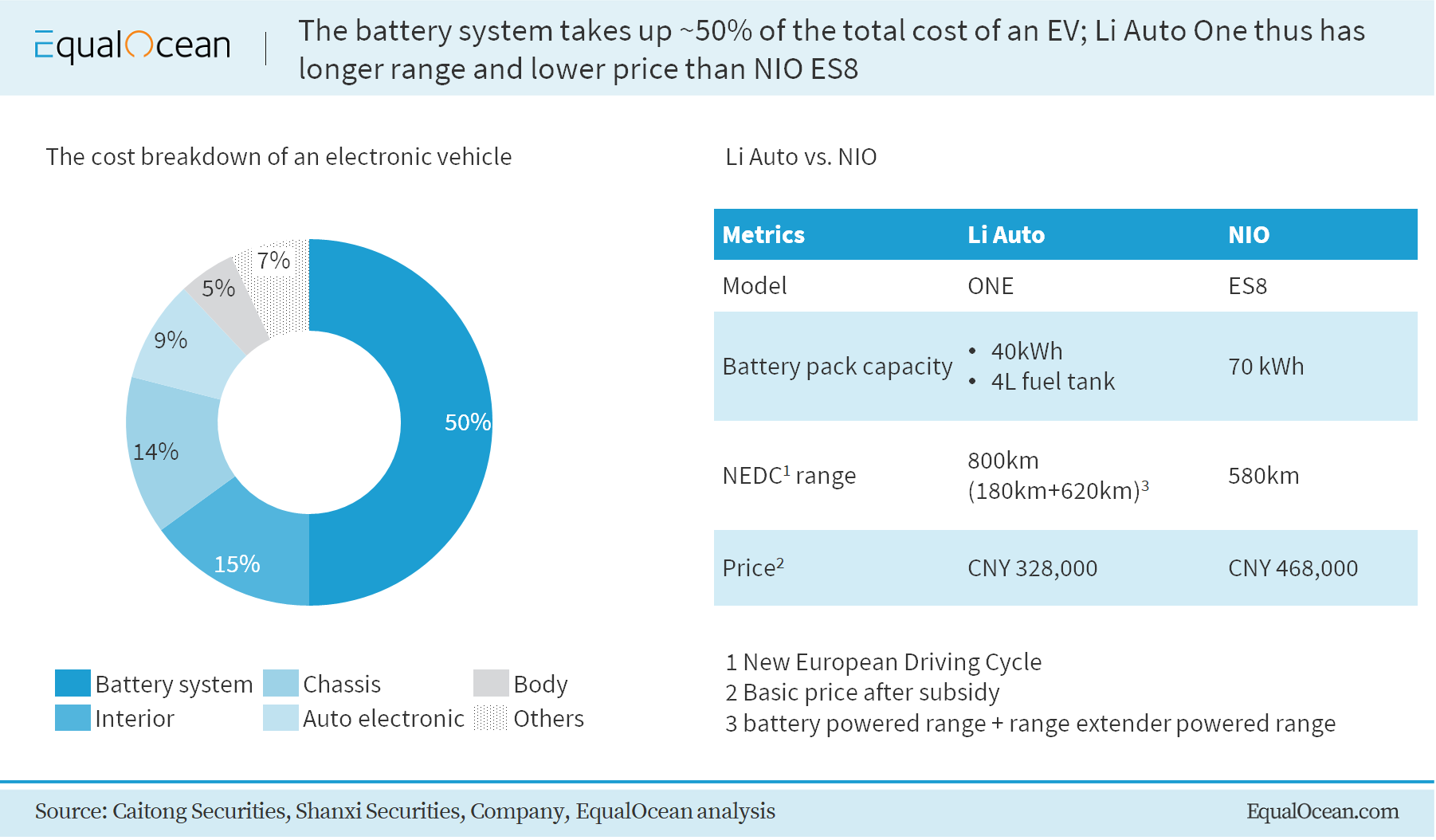 The technology alleviates customers’ range anxiety around worrying about running out of battery power with nowhere to go for recharge. Unlike battery-electric vehicles (BEVs), the unique technology requires a much smaller battery pack with a small internal combustion engine (ICE) present to generate additional electric power when the battery runs out. ICE works like a ‘power bank’ for the battery pack to provide constant power for the vehicle.

The availability of charging facilities is improving in the nation, but there are a lot more headaches ahead. EREV’s battery pack can be charged by the small ICE, and thus an EREV can be powered either by electric or fuel. In China, especially in tier-one cities (Beijing, Shanghai, Guangzhou and Shenzhen), private charging piles are hard to build due to limited land space. According to EVCIPA, in recent years, the ratio between the charging pile inventory and the NEV inventory in China has remained at around 3:1. With the fast-growing NEV sales and the scarce land for charging pile construction, the goal of achieving one pile for one vehicle is not likely to happen any time soon. 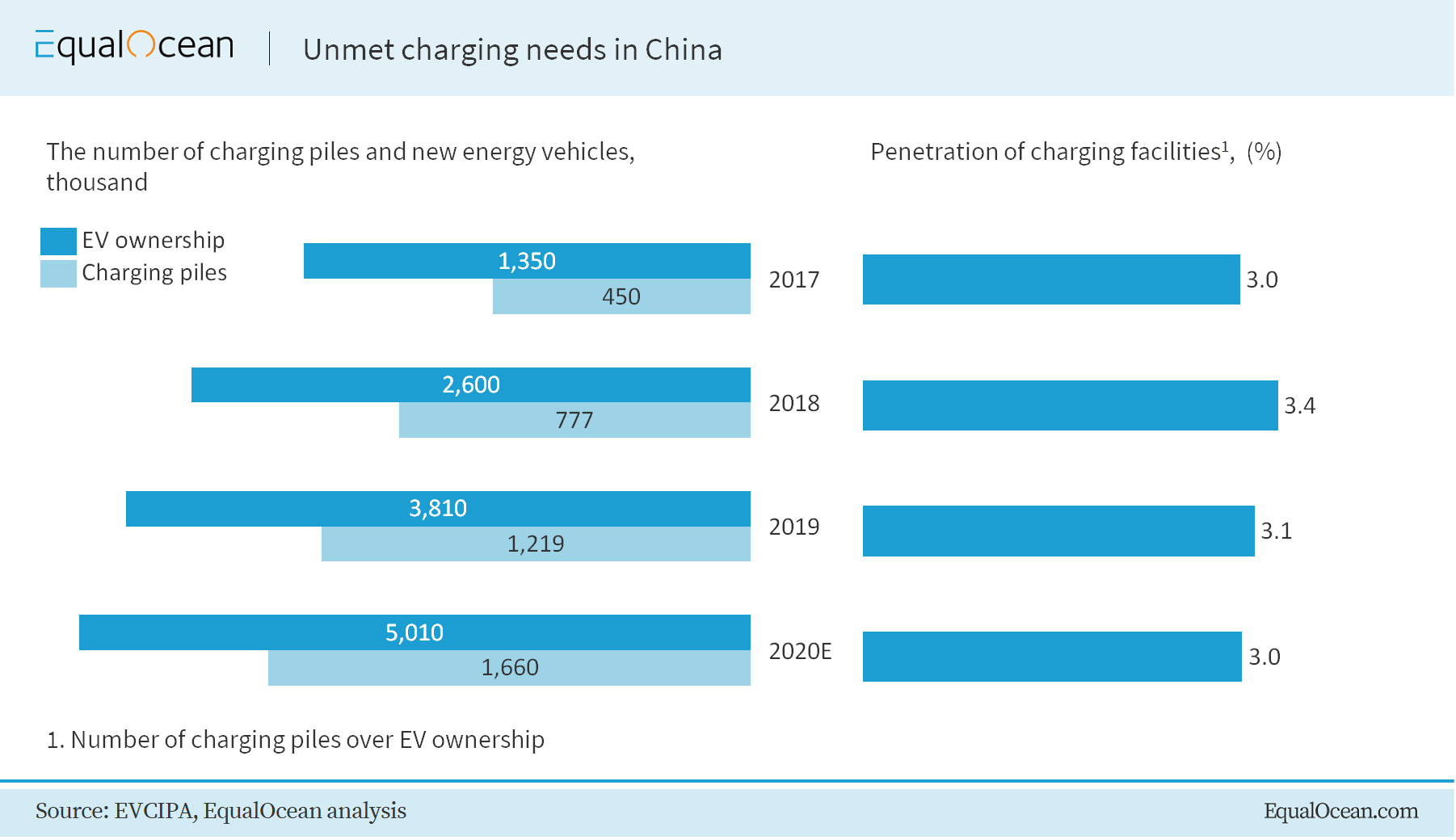 One step closer to the customers

In addition to technology-driven growth in customer satisfaction, service plays an increasingly important role in shaping the company's brand value. To better serve its customers, the company has decided to provide its productions and services in an entirely different way.

The traditional vehicle distribution strategy, through 4S shops causes additional charges and makes quality control harder. To solve the related problems, Li Auto customers can order their cars online, experience it in the showrooms and get it from the warehouse. This way, customers can directly deal with the company and give feedback to the company if any problem occurs. According to the company's official statistics, in a satisfaction survey of users, more than 98% of users expressed satisfaction with the experience of the vehicle and were willing to recommend it to their friends.

By the end of June, the company had opened 21 showrooms covering 18 cities in China. It aims to increase the number to above 30 by the third quarter of this year, and ultimately make it to 60 by the end of this year.

In addition, all the 21 existing showrooms of Li Auto were positioned in shopping malls, which is suggestive of their strategy to target younger consuming groups who are more likely to accept new things and, thus, more likely to buy NEV cars.

This article is part I of our analysis of Li Auto. Please continue to part II.