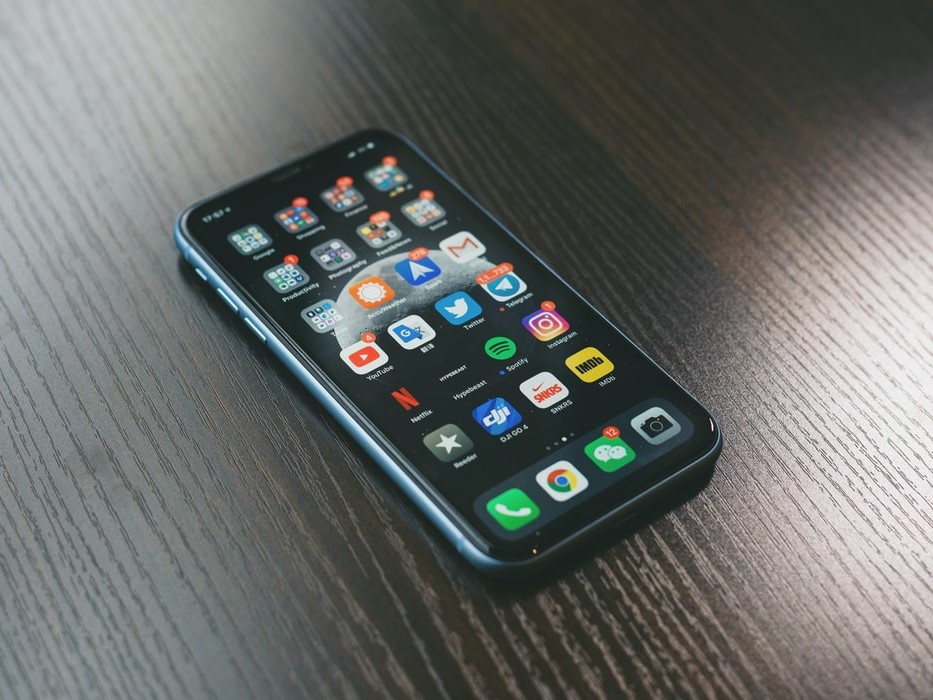 Weimob's share prices were hit heavily by two events in the first half of 2020 – one concerned the ‘sabotage’ issue back on Feb 23, and the other concerned Tencent's launch of WeStore. Now Weimob’s shares are trading at HKD 11.02 (as of July 24, 2020). Share prices picked up rapidly after the company announced a compensation plan days after the first issue, solving the investors' worries around customer leakage and attrition. However, some are still worried that Tencent will march into the massive SaaS for merchants living on its biggest social network, WeChat.

We see can clearly see the two pains that Weimob has, or has been going through. It is likely that these will prove the business’ resistance and the company’s values. This can be attributed to two reasons: 1. merchants have become more loyal since the sabotage issue, finding more issues arising when switching to another provider. 2. Tencent's move on WeStore serves long-tail customers while Weimob is in the direction of Key Accounts (KAs). We thus believe that Tencent will remain a strong partner for Weimob – and will not become an enemy at this stage.

We believe Weimob is shaping up to be an unstoppable leader in the niche of social e-commerce. 1. It is dominant in targeted marketing, thriving as a WeChat-based third-party provider. 2. It adds input in SaaS solutions (e.g., increasing cloud services procurement, expanding sales teams). 3. The cross-sell opportunity that its two main business divisions create is massive. Our target price of HKD 14.9 is based on an SOTP approach: 21x P/S for 2021E SaaS sales, and 17x P/E for 2021E targeted marketing net income. Maintain Buy.

As investors may grow concerned about the two issues mentioned above, along with macroeconomic uncertainties/hype in investing in SaaS/tech, we assume its stock price will hover around HKD 9-12 in the short term.

Highlights in FY19 and our forecast 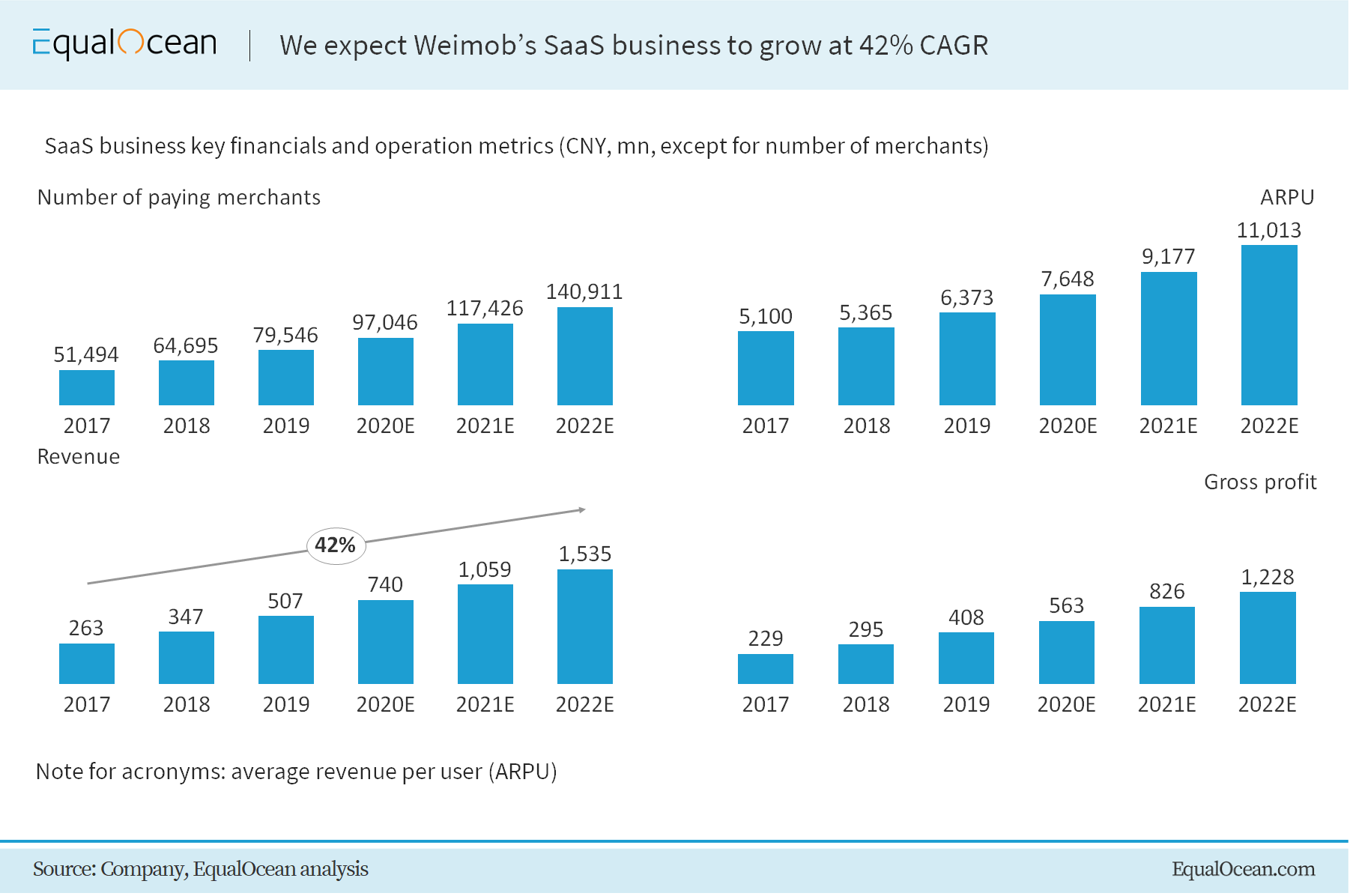 Growing ARPU in the SaaS business.

Weimob is expanding its KA merchant share and keeping the pace of serving large-sized merchants. In 2019, the ARPU rose by 19% to CNY 6,373.0 from last year's CNY 5,365.0. Back in 2019, the ARPU is still lagging ~CNY 3,000 compared to Youzan. Weimob established a new product pipeline in 2019 for new verticals such as premium marketing cloud and sales packages. As such, we believe Weimob has gained traction from focusing on increasing ARPU, instead of adding more users like it did in the previous years. As such, Weimob's number of merchants only rose 23% compared to 26% in 2018.

Opportunities in cross-selling and upselling.

The company's conversion rates of registered merchants to paying merchants of SaaS products were 2.0%, 2.7%, 3.3%. The number of paying users increased by 23% vs. 26% in 2018. We think it is partly attributable to currently the cross-sell between the two businesses is still very low, and the company focuses on larger clients. We see huge potential for Weimob to convert SaaS product merchants into advertisers, which usually pays higher, while also paying premium users. We expect more product innovations like visualized modules, marketing plug-ins, and business intelligence (BI) to lift up the SaaS ARPU in the next three years.

As explained in the initiation coverage article, Weimob's success in targeted marketing relies on Tencent and Supply Side Platform (SSP). Tencent's act of issuing a marketing service provider in its ecosystem a license defined by the provinces and industries they operate in. The license model gives providers like Weimob an edge over unlicensed parties with higher rebates and thus to establish their strength. We believe the policy will continue favoring Weimob in the coming years. At the same time, Weimob is likely to explore new traffic partnerships represented by ByteDance and its affiliates, Zhuhu and Baidu. 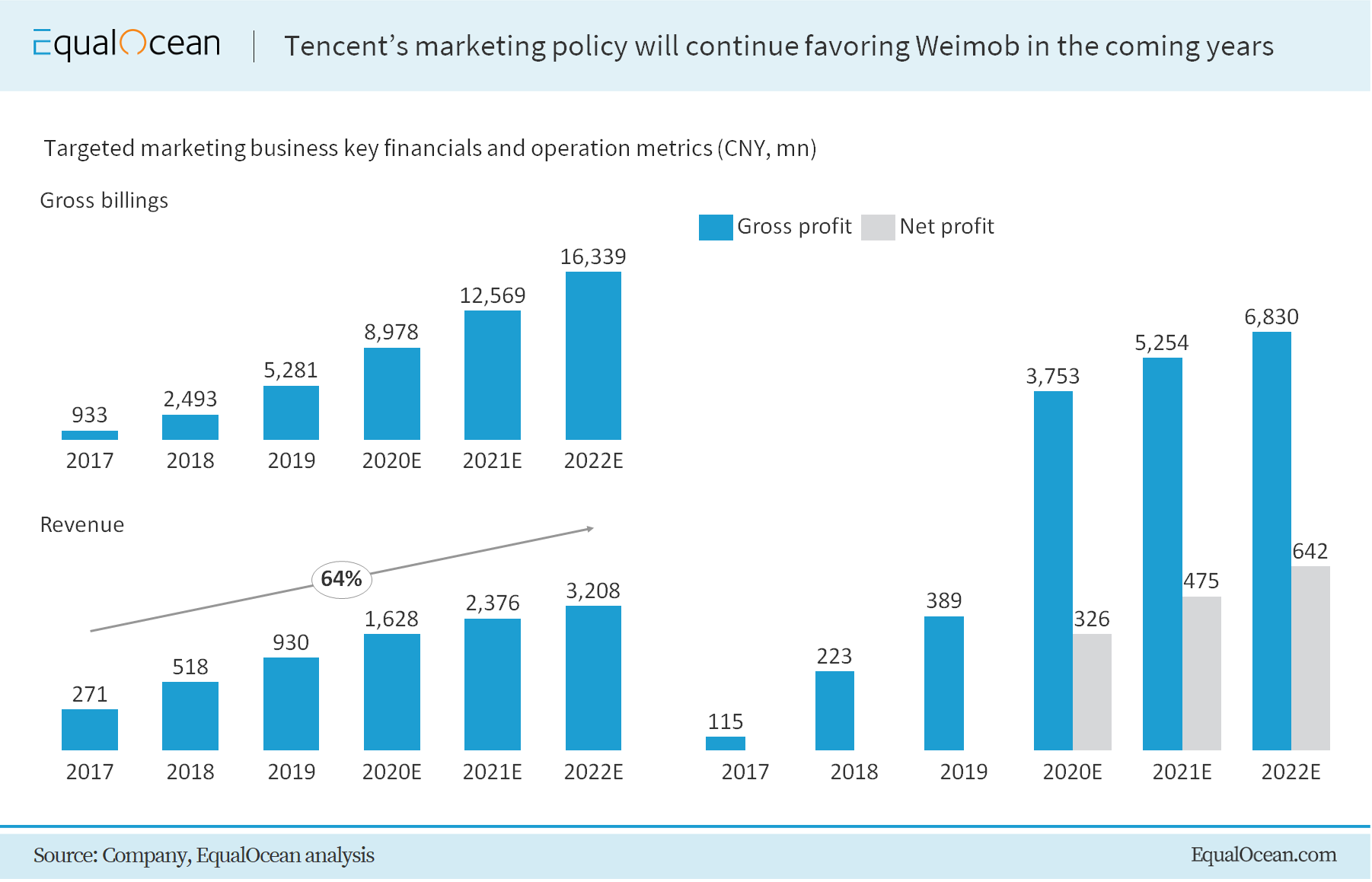 The sabotage event has made Weimob stronger and, more importantly, has raised customer retention, according to our investigations.

Weimob reacted fast to the issue by releasing a fair compensation plan that involves CNY 150 million cash and traffic compensation options. Though there are still merchants like Haoshiduoduo suing the firm, we think it won't affect the top-line much. Positives factors like higher ARPU will offset negatives, and higher average spend per merchant, and also higher Martech/SaaS penetration. Besides, Weimob's competitor China Youzan ramped up a marketing campaign trying to acquire customers from Weimob after the sabotage. The activity incurred more resentment from the Internet, with users complaining about the firm charging commission fee when merchants cash their revenues out, suggesting the firm is too eager to commercialize and neglects merchants' interests. Merchants with Weimob will stay with Weimob, according to industry insiders. As Weimob keeps expanding its service and sales team across the country to acquire the new ones and retain old ones, its product innovations will improve customer switching costs. We see the issue, and the afterward unveil Weimob's competence in the industry. To protect the same problem from happing, Weimob is likely to improve inputs in hardware, could servers and R&D. We expect gross margins to drop to 71% in 2020 to factor in these moves.

SaaS or PaaS? Tencent goes for the latter.

Tencent's WeStore is a mini-program for product sales and has been considered a big threat to standalone providers like Weimob. In the short term, it should not have a negative impact. Like its passive strategic investment style, Tencent usually helps brands and merchants grow their digital assets and expand in the ecosystem (think of how PDD grew from it). We believe that Tencent's utmost interest remains unchanged – it seeks to build a social e-commerce ecosystem along with third-party 2B SaaS product providers in Martech, customer service, and others, instead of framing itself as a direct competitor. PaaS will remain the future of WeChat, a viable path that Salesforce (CRM:NYSE) also chose – correctly, in our view. WeStore providing basic functions to long-tail merchants will accelerate SaaS adoption, social e-commerce penetration and merchants' willingness to pay more. This will further help to speed up the overall market volume ramp-up. 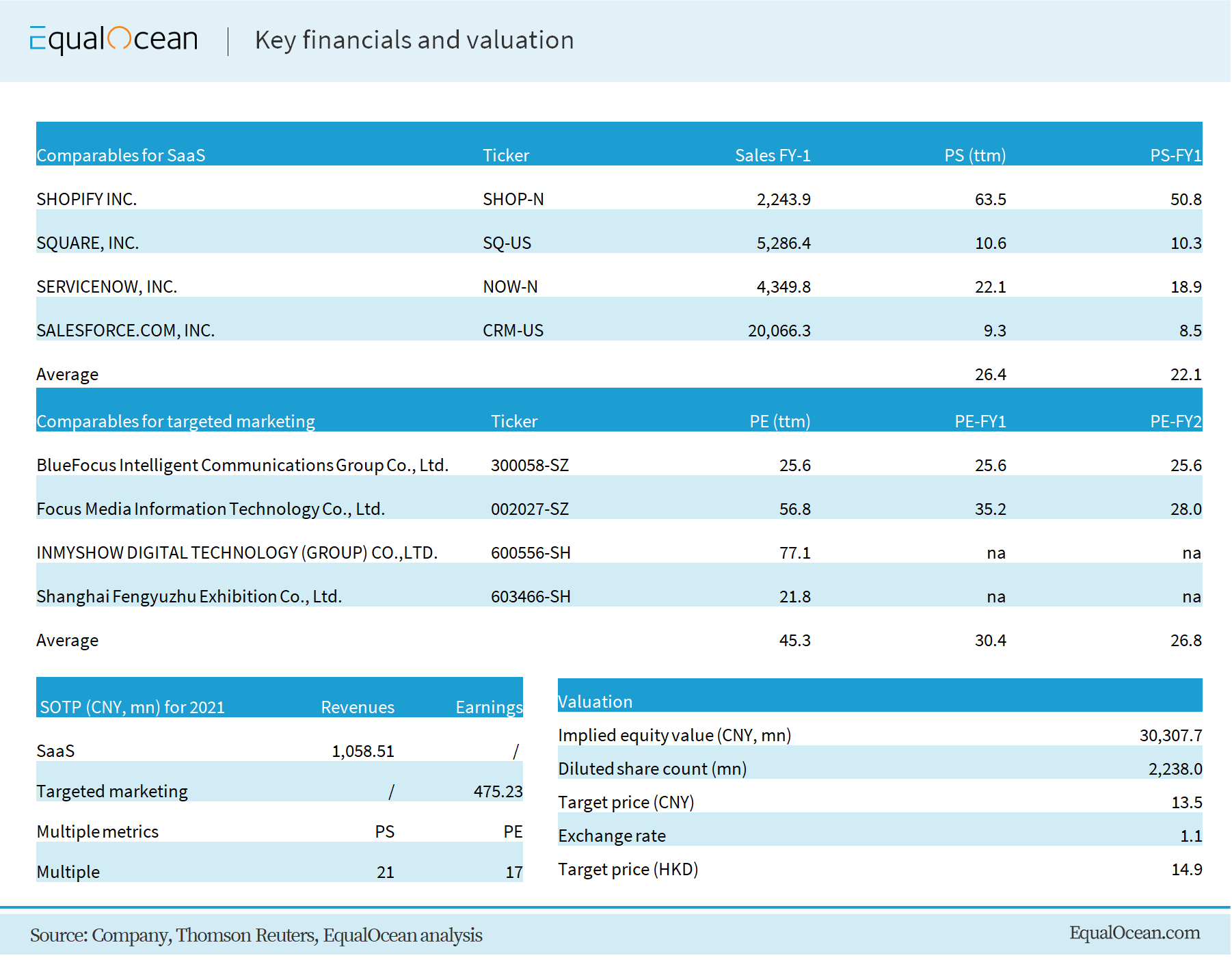 We derive our price target of HKD 14.9 from SOTP given the business spilt:

For the SaaS business, we apply a target 2021E P/S of 21x, which is the average multiple of Shopify, Square, ServiceNow and Salesforce.

For the targeted marketing business, we apply a target 2021E P/E multiple of 17x, deriving from the average multiple of four Chinese advertisement comparables. We apply a high discount to stay conservative here as the business net margin is exposed to higher risks than the SaaS business.