Tencent's WeBank: A Tech-Driven Bank or a Licensed Fintech?

It took the company only five years to achieve a staggering CNY 110 billion valuation. 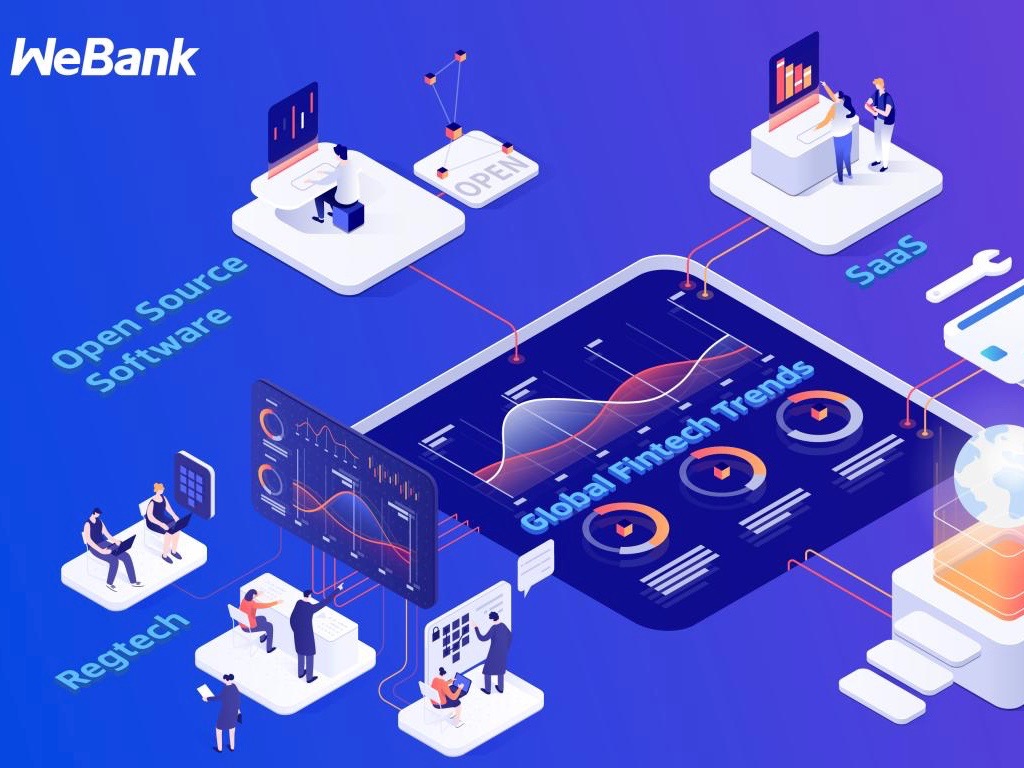 ►Individual lending platforms WeiLiDai, Xiao'e Huaqian, and WeiYeDai, which primarily target small businesses, are the three main components of WeBank’s product mix.
►The company capitalizes on AI, Blockchain, Cloud Computing and Big Data to advocate for inclusive finance, which was its original intention.

Among Chinese banks, WeBank wears the most garlands – it ranks as the first online bank worldwide, the largest banking unicorn globally, the first private bank nationally, the first Chinese digital bank rated by Moody’s and S&P…

So, what on earth is this company?

The ‘new banks’ shouldn’t be just upgraded traditional banks – they are supposed to be an entirely new model, built from scratch to satisfy the fluctuating needs of a digital era. That was exactly how WeBank, the originator of developed online banking, was established.

Tencent-owned, it was founded with the mission of providing ‘inclusive finance,’ targeting unbanked and underbanked individuals and SMEs, while capitalizing on its technology advantages. After five years of deployment, it has developed clear business models and taken its steps towards a relatively stable stage.

Making a mark on ‘inclusive finance’

WeiLiDai (Chinese:微粒贷 - ‘particulate loan’), a purely online lending platform, launched first. With the launch button clicked in 2015 by Li Keqiang, the Prime Minister of China, the first loan was sent. The online credit services reformed the lending business in the banking sector, significantly expanding the pool of consumers and increasing borrowing efficiency. Now it has become one of the most popular consumer finance products to focus on microcredit in China, making solid progress on its track towards achieving the goal of scaled inclusive finance.

Targeting those in the population with below-average income and with less or no borrowing records, WeBank is designed with the simplest operation patterns – it has minimal buttons, making it very friendly to users. These advantages, along with its cheap borrowing fees, allowed WeiLiDai to win the market very quickly. At the end of October in 2015, WeiLiDai had already given credit to over 10 million people with the transaction amounts reaching to over CNY 7 billion. The revenue of the company has grown steadily from 2016, and total assets and total lending are growing fast as well. 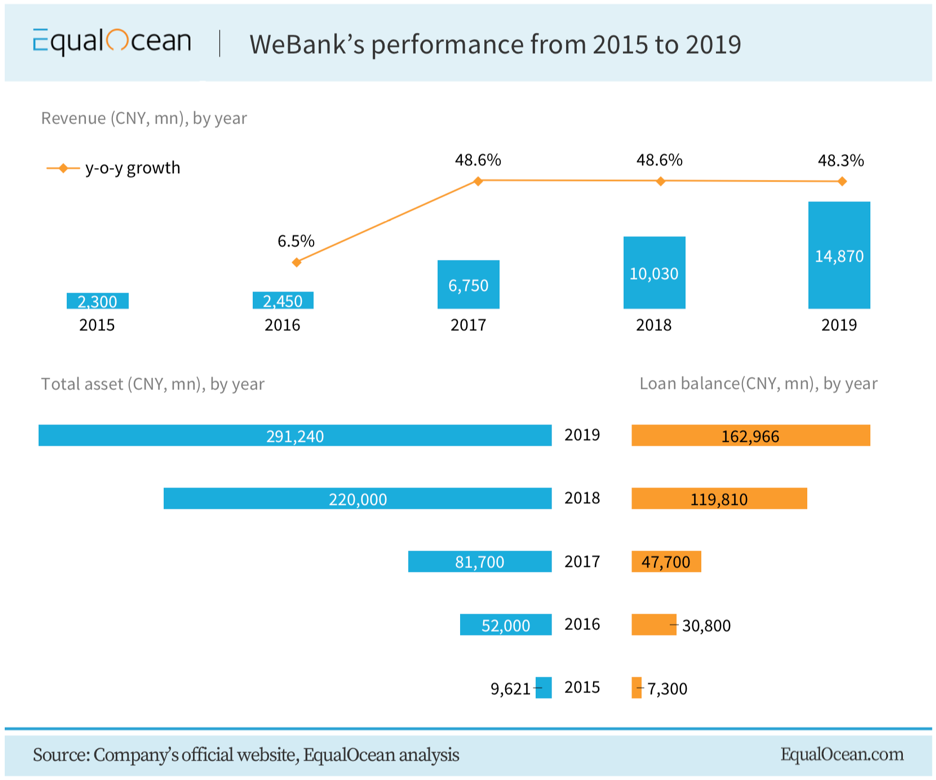 Now, the average lending amount is around CNY 8,000, with an average borrowing period of 52 days. More than 70% of the clients paid interest less than CNY 100, over 8.2 million users had no credit on book before. The accumulated lending reached CNY 3.7 trillion and the number exceeded 460 million. The company did achieve its intention of solving the imbalance in financial supply by providing more momentum to the low-tier population, then promote the entire financial industry in servicing more population.

Another product, WeiYeDai (Chinese:微业贷 – ‘small-business loan’), debuted in 2017, intended to boost entrepreneurship in China. Among clients, 66% had never borrowed money; this provided job opportunities to more than 2 million people. 64% of the businesses have revenue less than CNY 5 million, with an average employee roster of ten people and an average lending amount of CNY 0.2 million. At the end of 2019, the platform has provided credit services for over 230,000 small businesses, 3.4 times larger than last year, and the total lending amount increased 2.5 times to CNY 180 billion.

Unlike WeiLiDai, which is supported by the WeChat ecosystem, WeBank and licensed financial institutions co-launched Xiao’e Huaqian (Chinese: 小鹅花钱 – ‘gosling spending’) based on Tencent Video’s traffic in 2019, which is the second product to focus on the individual consumer finance field. The product links to the membership of Tencent Video, with the banking accounts opened with WeBank and the lending services provided by the third party.

In risk management, WeBank has introduced more than 30 kinds of data sources, including business and individual credit records, and Tencent-owned databases.

A technology company with banking licenses

In achieving a sustainable business, WeBank actively leverages the power of technology and innovation.

WeBank doesn’t so much serve as a bank with technology advantages as a technology company with banking licenses. In 2019, its patent application numbers ranked first among all banks worldwide, recording 632 in total, even surpassing some global banking giants such as Bank of China, Bank of America, JPMorgan Chase, and Goldman Sachs. The patents are centered around AI, Blockchain, Cloud Computing and Big Data (ABCD). 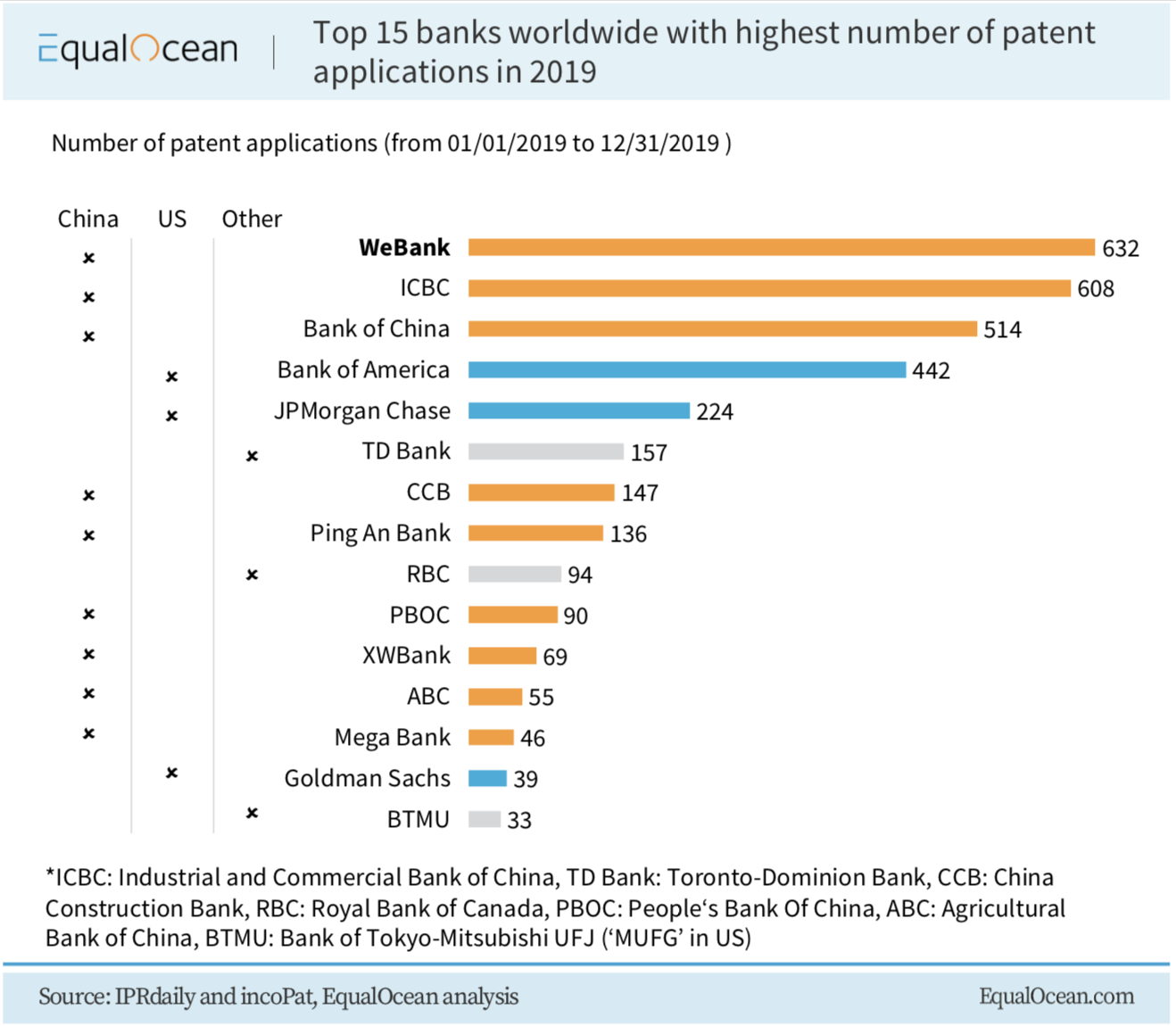 So how does WeBank use its technology advantages?

Unlike traditional banks that use the ‘IOE’ system to support their products, i.e. IBM, Oracle and EMC, WeBank has used the de-IOE system from the very beginning. The IOE structure is based on centralized and closed-source systems, which means higher costs and private sources with security issues. The De-IOE system, on the other hand, has an IT maintenance cost that is 900% lower than the traditional banks. The use of the open de-IOE system enables WeBank to expand its transaction scales fast and securely.

What is more, In 2018, the company launched the ‘WeBank Fintech’ platform to promote its open banking ecosystem. Empowered by its advantages in ‘ABCD’, WeBank demanded a ‘Three Opens’ strategy the following year to decode the open baking ecosystem.

The strategy seeks to center on banks themselves and to then expand to the business partnerships, and finally to establish an ecosystem by technology. The first step will be opening the platform. By sharing data models and algorithms, non-financial companies can provide financial services to the public. The second step is opening innovation, which means WeBank can open its technical capacities to help more business partners, reduce its cooperation threshold, and therefore construct a shared business infrastructure. The last step will be the open collaboration that further promotes partnerships to build business alliances and ecosystems.

Banking everywhere – but never at a bank. In this new era, open banks are fueling the transformations, and that is exactly what WeBank wants to stand for.

In the next article, we will discuss how the market is going and how WeBank is performing among players.