Tencent’s banking spinoff’s profitability has surpassed that of the vast majority of public banks worldwide -- will it last? 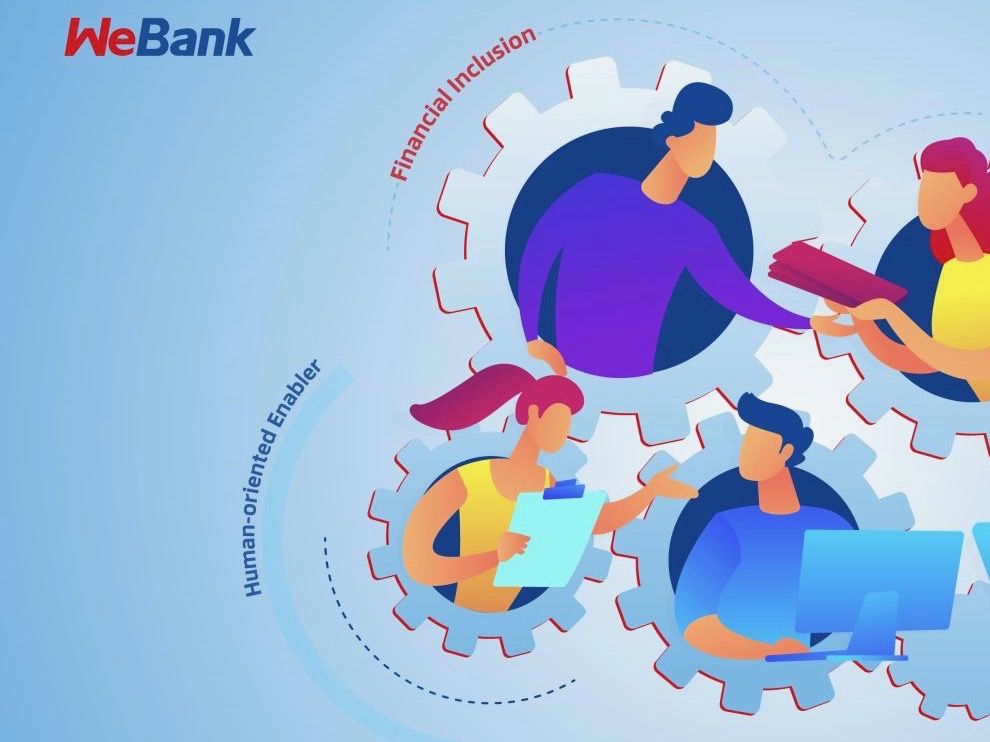 ►WeBank and MyBank account for nearly 50% of the entire asset pool in China’s private banking sector.

►Credit risks from both banks in the management side and from borrowers in the fund usage side provide certain concerns on the future of private banks.

In the previous article, we drew a sketch of WeBank’s business. Here, we outline the full picture of China’s entire banking market and the company’s position within it.

Within only five years, WeBank, a private online bank, has seen its profitability rise to the second-league level among the public urban commercial banks in China, with a net income ranging between CNY 5 to 10 billion.

The total assets reached nearly CNY 300 billion, and the loan balance achieved CNY 163 billion, with increases of 32% and 36% respectively. The figures have surpassed several public urban commercial banks in China.

At the end of 2019, WeBank had served over 200 million individuals and 900,000 of businesses, significantly overrunning the figure of 100 million and 340,000 in 2018. The loan balance coming from small businesses also jumped up twice, marking a more balanced income structure.

As a young and 100% internet bank, it cares more about risk management than traditional banks because of the vulnerable nature of microloan. To be more conservative, WeBank became the first to adjust its standards in measuring nonperforming debt, with used loans 60 days past due instead of 90 days to calculate the ratio. In 2019, the ratio was 1.23%, increasing from 0.36% in 2018. Compared to the average bad loan ratio for commercial banks in China of 1.86% in 2019 under the 90 days due to standard that released by China Banking and Insurance Regulatory Commission (CBIRC), WeBank performed much better. What is more, according to CBIRC, the loan coverage ratio for the lending from financial institutions nationally to small and medium businesses (SMBs) with an amount of less than CNY 10 million posted 5.9%.

Starting with the establishment of WeBank, more private banks evolved with the businesses focus on ‘new’ fields. Now, there are 19 ‘new banks’ in the Chinese banking industry with high industry concentration. The total assets among these private banks range from less CNY 5 billion to nearly 300 billion, the net income also low to negative figures and high to near CNY 4 billion.

MyBank, an Alibaba-backed online bank with a focus on small business loans, together with WeBank to count almost 50% of the entire private banking sector based on the total asset scale. My Bank posted net income of CNY 1.26 billion, largely increased by 90.88% from 2018, ranked second in the industry. However, the profit of WeBank is over three times higher than MyBank, and even recorded near five times the total figure from the rest of the banks. 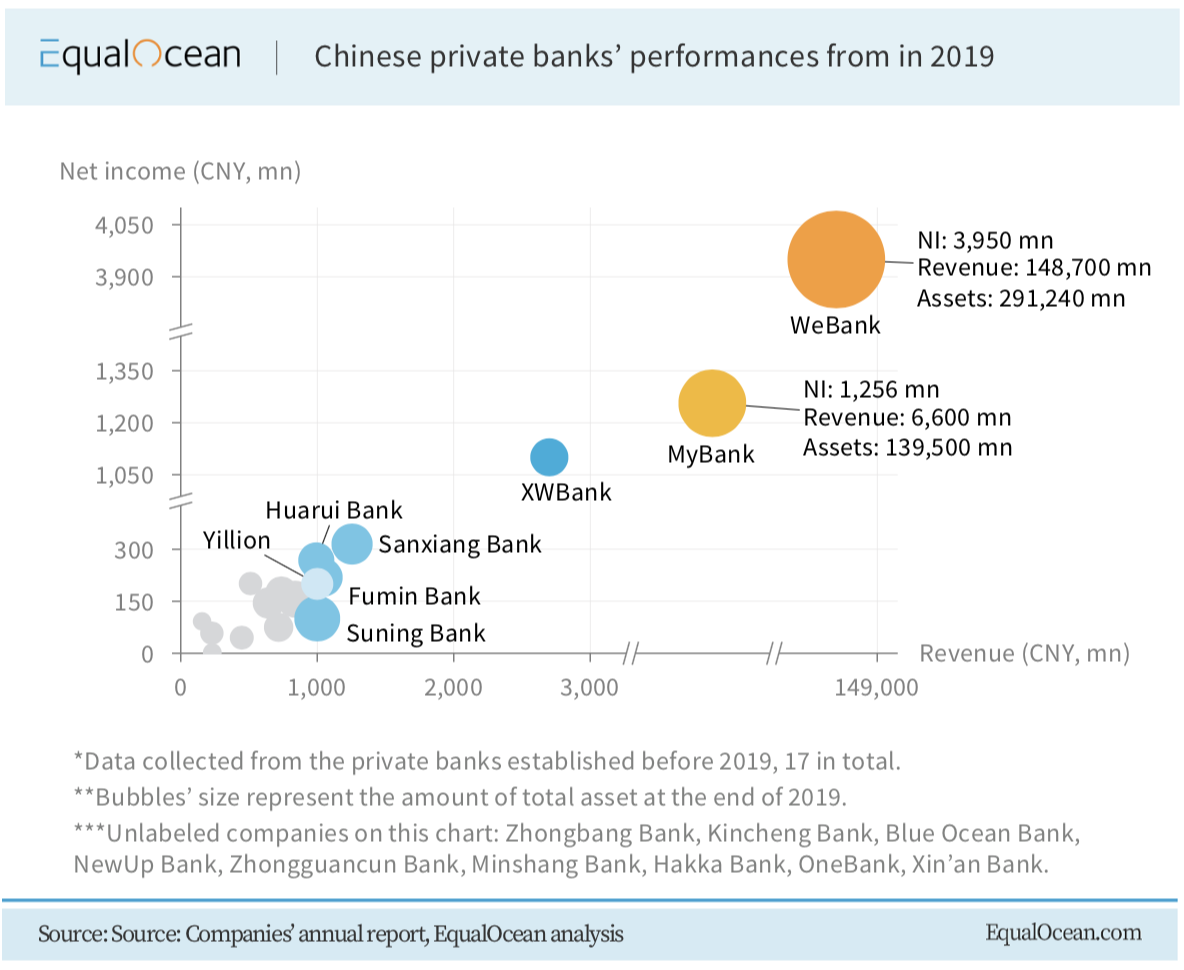 Wide gaps exist between the rest of the banks and the first two giants. XWBank, performed outstanding among them, posted net income of CNY 1.1 billion in 2019 close to MyBank with the only one-third of latter revenue. Fumin Bank, Sanxiang Bank, and Yillion Bank reported a net income growth over 100% in 2019.

The individual client number of WeBank defeated others by a wide margin. WeBank has clients over 200 million on the to-C side in 2019, followed by XWBank of 31 million and Sanxiang Bank of 2.68 million. As for to-B business, MyBank is the leader, which has offered credit services to 20.9 million SMBs, significantly surpassing the figure of 0.9 million of WeBank.

What is more, all banks have a certain emphasis on technology reflected as the technician numbers, accounting for around 50% of the total employees. Among them, WeBank, MyBank and XWBank are above the level, with the ratios of 60% (said near 60% in the annual report with no specific number disclosed), 52.2% and 50.7%, respectively.

As mentioned, the private bank sector in China concludes all the ‘new banks,’ targeting both individuals and SMBs. WeBank, MyBank and XWBank and Zhongbang Bank are four online banks, with MyBank mainly providing services to businesses and the rest of them focus on individuals. Suning Bank defines itself as an O2O bank, backed by the large consuming ecosystem of Suning with a large emphasis on consumer finance and supply chain finance fields. The two new private banks that were established in 2019, Yumin Bank and XiShang Bank position themselves as a ‘5G bank’and an ‘IoT bank,’ respectively.

Future of the ‘new banks’: risk management is the first priority

There are 19 private banks now in China with the total assets scaled to CNY 900 billion at the end of 2019, up by 41.2% from in 2018’s CNY 637 billion. The total net income reported CNY 1.97 billion in 2017, rising fourfold to 8.2 billion in 2019. The sector is growing at a rapid speed. Even with different positions, all private banks have the same mission, which is to bring credit services to unbanked individuals and SMBs with technology solutions and reach scaled inclusive finance in China. Around 40% of adults in China that have no personal loan in the consumer finance field, which is also the main market these banks are competing for. They have a bright future and a near-infinite market ceiling.

However, while a crucial part of transforming the entire banking industry, they only account for less than 0.5% of the entire assets of the latter. It’s still a massive undertaking to develop stronger services. What is more important, with limited time of operation, many potential risks associated haven’t been revealed.

Private banks are facing difficulties in attracting deposits because of zero-branches and limited public trusts. Many of them scaled up their debts by issuing large amounts of certificates of deposit (CDs) and some innovative products, which pushed them back to the business of traditional banks. In the future, private banks should insist on the ‘light asset’ model and explore the fields that haven’t been deployed by the traditional banks.

What is more, online credit services have high risks. Though the nonperforming loan ratio is still at a very low level, it is poised to eventually rise because of the low amount of the loans and the easy approval processes.

In 2019, the ratios for Yillion Bank and Zhenxing Bank, the two names with the highest growth rate in the segment, both jumped up from zero to over 1%, which should’ve alarmed the entire sector. In the first quarter of 2020, the nonperforming loan ratio of the entire sector ran up by 0.46% to 1.14%. Furthermore, many individuals borrow money for investment, which further increases the credit risk.

Other concerns center on the information leak and the instability in the management team among private banks.

All in all, there is still a long journey ahead.