Will China's DJI, the 'Apple of Drones,' Outcompete Intel and Qualcomm Again? [2/2]

With its most recent series of financing, the valuation of China's DJI – the company that possesses 74% of the global consumer drone market – surpassed USD 15 billion, placing it among the top tech unicorns worldwide. 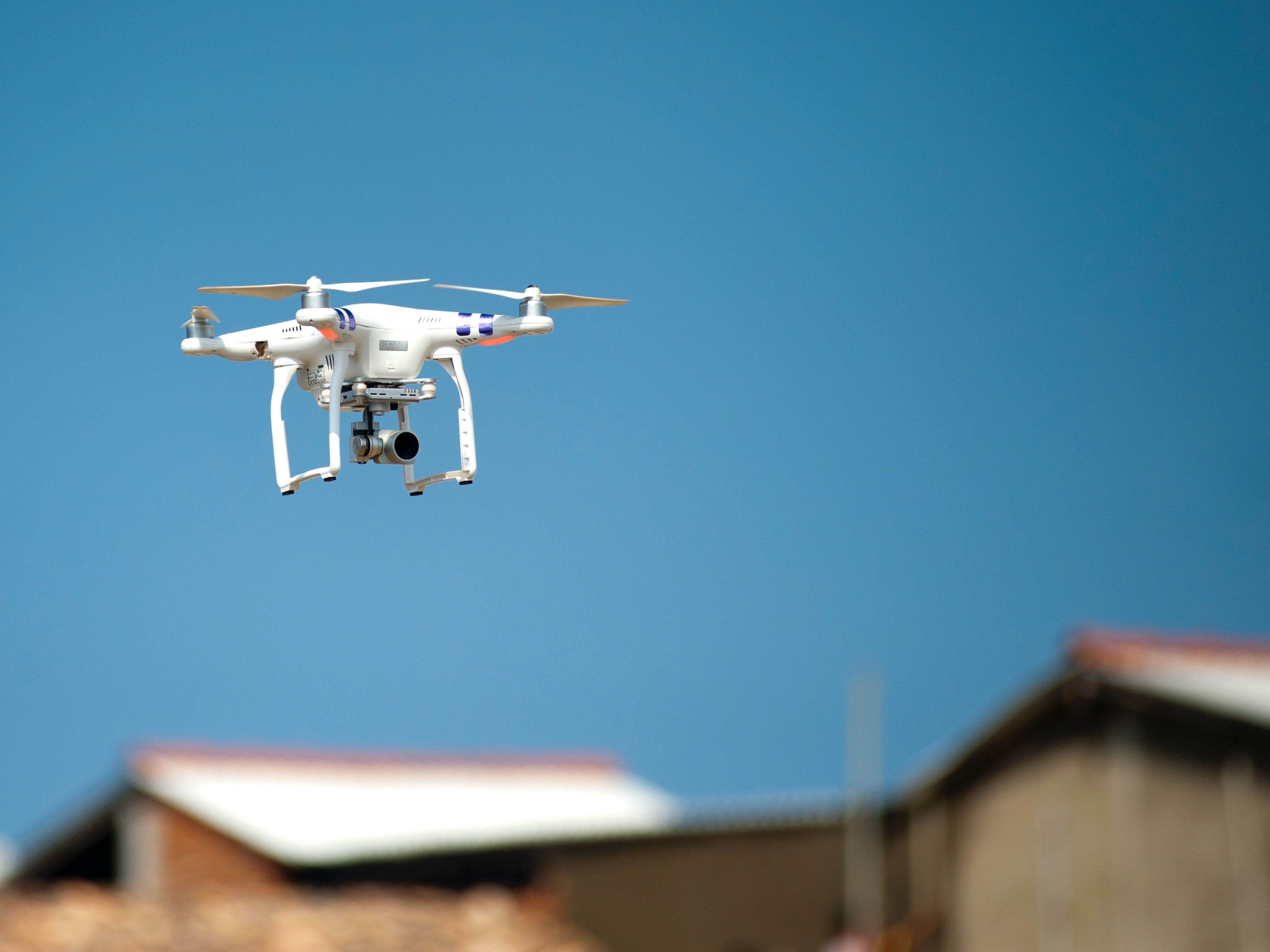 ► The current government regulation on consumer drones limits the functions of the miniature drones and the market volume.
► It is highly possible that the regulation on civil drones will tighten in the future, which will further contract the market size.
► Big firms that were previously investing in the drone industry, such as Intel and Qualcomm, are waiting for opportunities to replace DJI as the top players.
► The development of open-source flight control platforms might ignite a fierce price war in the drone industry.
► The deglobalization trends and the US-China tensions are likely to have adverse effects on DJI's future.

In the previous article, we talked about the core technologies and strategies of the global consumer drone monopolist – Da Jiang Innovation. Here, we will focus on the company's potential risks.

Da Jiang Innovation, the Shenzhen-based drone maker, has remained low key, even when its products are world-renowned, and the volume of its estimated revenue ranks top even if compared to China's major listed electronics companies. However, during recent years the company stopped revealing its annual financials. One possible reason is the company does not need attention from investors as it is not expecting further rounds of financing. Another is that the company might fail in presenting growing financial numbers, as the CEO of DJI Frank Wang predicted that the company's revenue would meet a ceiling of USD 3 billion if no scope expansions were reached.

Though the company has stretched its business scope to industrial drones in agriculture and autonomous vehicles areas, the consumer business sector still takes around 80% of the revenue structure. Thus, the challenges that lie in DJI's consumer drones are the fundamental risks.

The most directly problematic factor for the consumer drone market is government regulation. According to the Chinese regulations, there are five types of unmanned aerial vehicles (UAVs) in terms of weight. Among them only the miniature unmanned aerial vehicle (MAV) bracket, which refers to UAVs that weigh under 250 grams, is not required to be filed with the local government. The complex registration process would be an obstacle for serious consumers who are not inclined to buy drones as toys. Though the company managed to release a spec Mavic Mini, the lightest drone type ,which weighs only 249 grams (on the edge of the registration-free requirement), the functions of flight speed, obstacle sensing and wind resistance of the lightweight drones lag far behind the ones weighing around 1 kilogram. 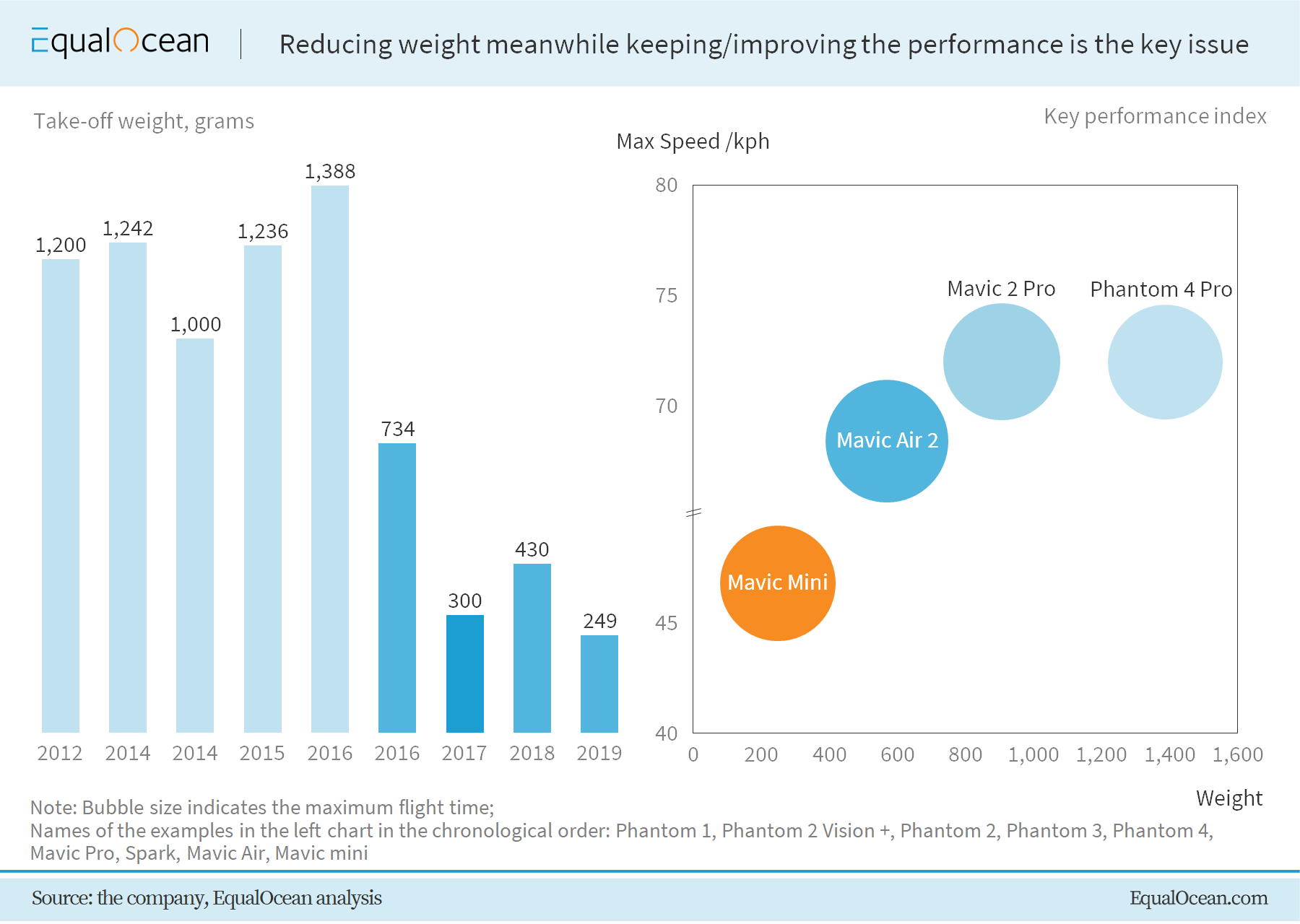 Besides the current registration problem, the potential policy tightening of the civilian UAVs regulations is also worrisome. Under the current regulation, any type of aircraft is banned within the sixth-ring road in the capital city of China. It remains ambiguous if the policy on drone control will get tighter to the extent of a 'worst case' scenario where all civilian drones will be banned in cities. The situation in DJI's second-largest market, the US, might be riskier. In October 2019, the US Department of the Interior (DOI) grounded its fleet of drones which are mostly made by DJI. As the US-China tension gets worse, the possibility of DJI losing the whole US market which accounts for approximately 40% of its total sales, is rather high.

DJI's monopoly in the global consumer drone market is partly a reward for the company's comparably advanced flight control and gimbal technologies. Apart from that, the situation is co-created by DJI and its potential competitors, which have the capacity to enter DJI's area but somehow decided not to put much effort at the current stage, fearing the policy risks and comparably low investment return.

However, if the pioneer DJI activates the consumer drone market by exploiting more users demand and application scenarios, and the government regulatory frameworks turn out to be mild (for example the registration processes are simple and the weight limits are relatively high) in the future, several strong competitors would be ready to go for the market with established technologies and sufficient capital support. Besides, big vendors R&D and applications on vehicle networking and autonomous driving, which have shared tech demands for sensors and navigation systems could also benefit their drone development.

Two of the potential DJI counterparts with strong competitiveness are Intel (INTC:NASDAQ) and Huawei.

Intel, the leading semiconductor manufacturer, was ambitious in taking the lead in the commercial drone space when it released 'Falcon 8' and designed its flight control system AscTec Falcon system in 2016. Except for the in-house R&D on drones, the company also powered other drone makers such as the China-based aircraft manufacturer Yuneec International and a US company Nixie, which makes drones as wearables. Intel's investments in both China's vast consumer market and the US' innovative ideas are going for a leading role in the future drone area.

The same theory can be applied to Chinese telecom giant Huawei. In 2016, Huawei announced cooperation with Next Dimension to develop a UAV system based on chips powered by Huawei's subsidiary HiSilicon. At that time Huawei was targeting its competitor Xiaomi (01810:HK) in the consumer market, which released a consumer drone in the same year. Moreover, unlike Xiaomi which gave up on the drone business due to the meager revenue, Huawei has been working on the drone developed even after partially quitting the consumer drone segment. In April this year, Huawei cooperated with Ehang (EH:NASDAQ) and launched its UAV food delivery solution. Though Huawei's solution has not yet been massively applied, it breaks DJI's illusion for leading the industrial and logistic-related UAV industry.

Besides big companies which share interests in the drone business are threatening DJI's future development, some comparably small companies, which choose to buy the open-sourced flight control system powered by drone solution providers Ardupilot Mega (APM), MikroKopter (MK) or Qualcomm's (QCOM:NASDAQ) Snapdragon Flight platform, could even eat into more of DJI's future market share through lower prices. There are already some signs. For instance, Qualcomm led a USD 50 million Series C financing for one of DJI's most strong competitors 3DR, and as the agreements said that Qualcomm will be the only system supplier for 3DR.

At the current stage, DJI's popularity is caused by the temporary situation where the flight systems powered by the above companies are not competitive enough in terms of stability, maximum flight time and human interaction. However, as DJI's technology in consumer drones reaches a ceiling, it is only a matter of time for other system providers to catch up with DJI. By that time, the companies that resort to the ready-designed systems do not have the burden of upfront R&D investment, will be capable of selling products that perform as well as DJI ones but with more competitive prices. The situation would be tough if DJI loses its technological superiority.

The last two years have witnessed various cases of deglobalization, which is considered especially harmful for the development of tech firms, since the build-up of innovation capacity has intertwined with growing participation in global supply chains. 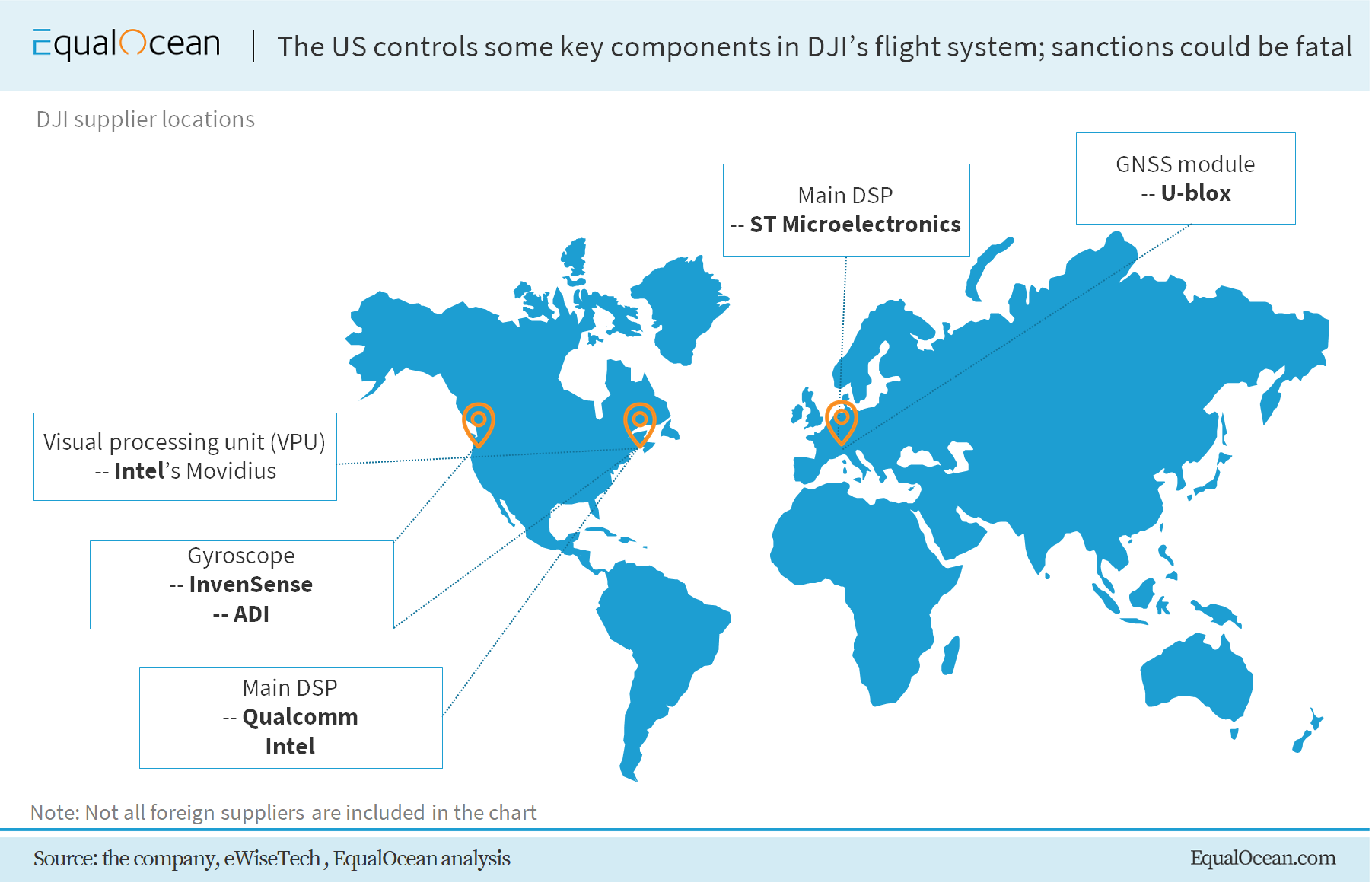 In DJI's case, the risks aroused by the trend of deglobalization involves every step from production to sales of DJI's business. From the production side, the company heavily relies on overseas hardware suppliers. The core components such as motion sensors, CMOS sensors and GPS modules, are mostly provided by the US and European companies. If DJI is on the trade blacklist of the United States, the motion tracking sensors that are supplied by InvenSense, the Phantom series chip provided by Atmel, visual processors from Intel and the WiFi SoC from Qualcomm, will be in severe supply shortage.

As for demand, the company has around 80% of total revenue from outside China and around 40% from the US market. If DJI is going to lose the US market due to the rumored cybersecurity problems, the loss of revenue could reach around USD 800 million annually.