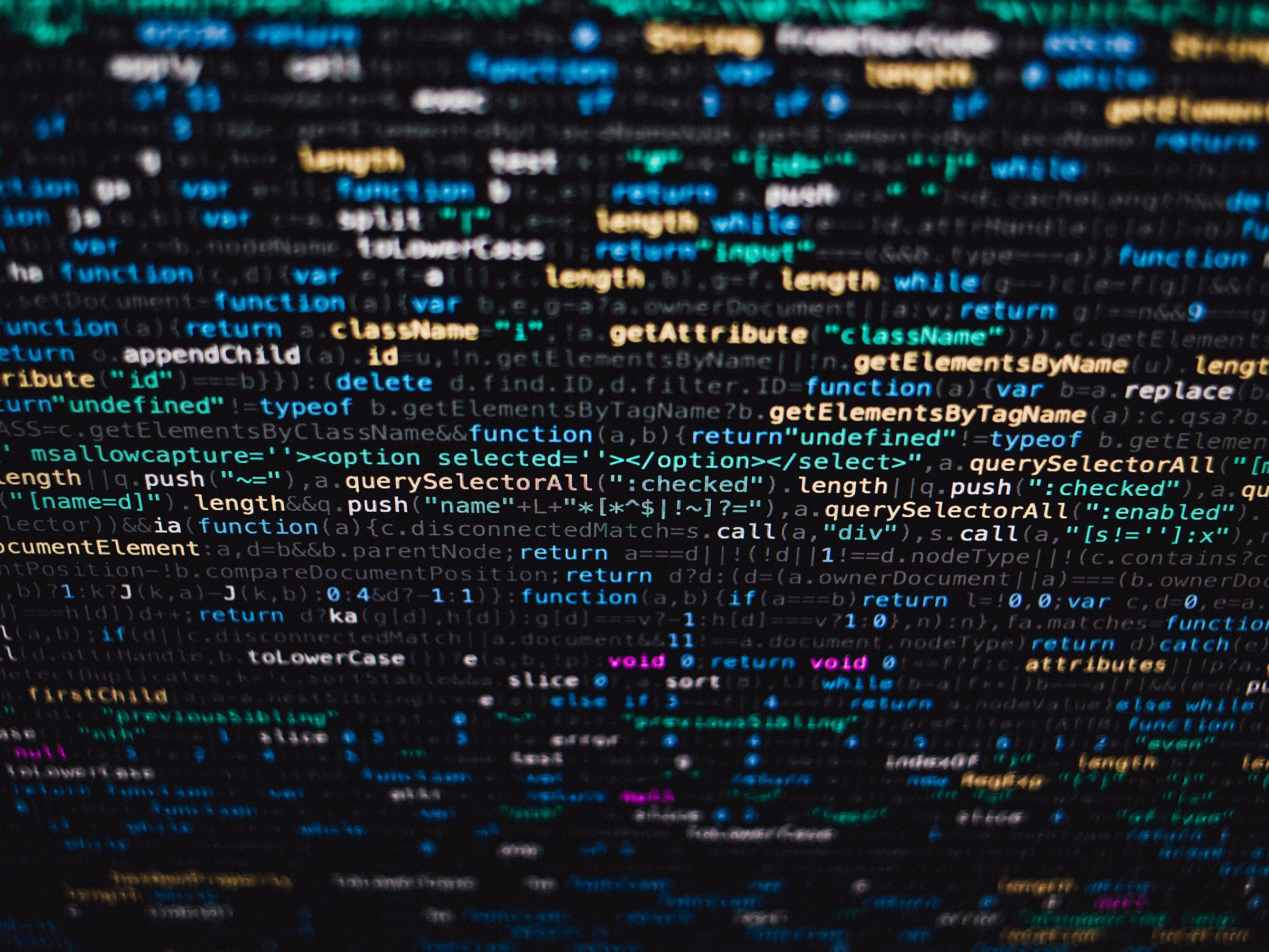 In the past 20 years, the cloud sector saw several critical technology developments, including virtualization, container, microservice architecture and serverless architecture. These innovations, combined with final customers' demand, have been bolstering the thriving industry in the United States. By comparison, China's cloud market is still at the early stage, which is indicated by the sector’s small share in the country’s GDP. Recently, Alibaba published its three-year CNY 200 billion plan, Tencent also disclosed a five-year CNY 500 billion investment in the 'New Infrastructure.'

► Unlike the western markets that are primarily driven by the demand, the Chinese data center industry, like many other sectors here, is likely to be pushed forward first by the government-designed roadmaps and large companies' business strategies.
► The main catalysts include cloud computing, 5G and Artificial Intelligence.
► We expect that the whole industry will thrive in the future.
► Local third-party data center companies present quite a few new investment opportunities.

From 2007 to 2009, the market experienced fast growth from a small market scale. The growth rate saw a spike, fueled by the 3G adoption cycle in 2009. Since then and until 2019, 4G adoption was the catalyst for data soaring. 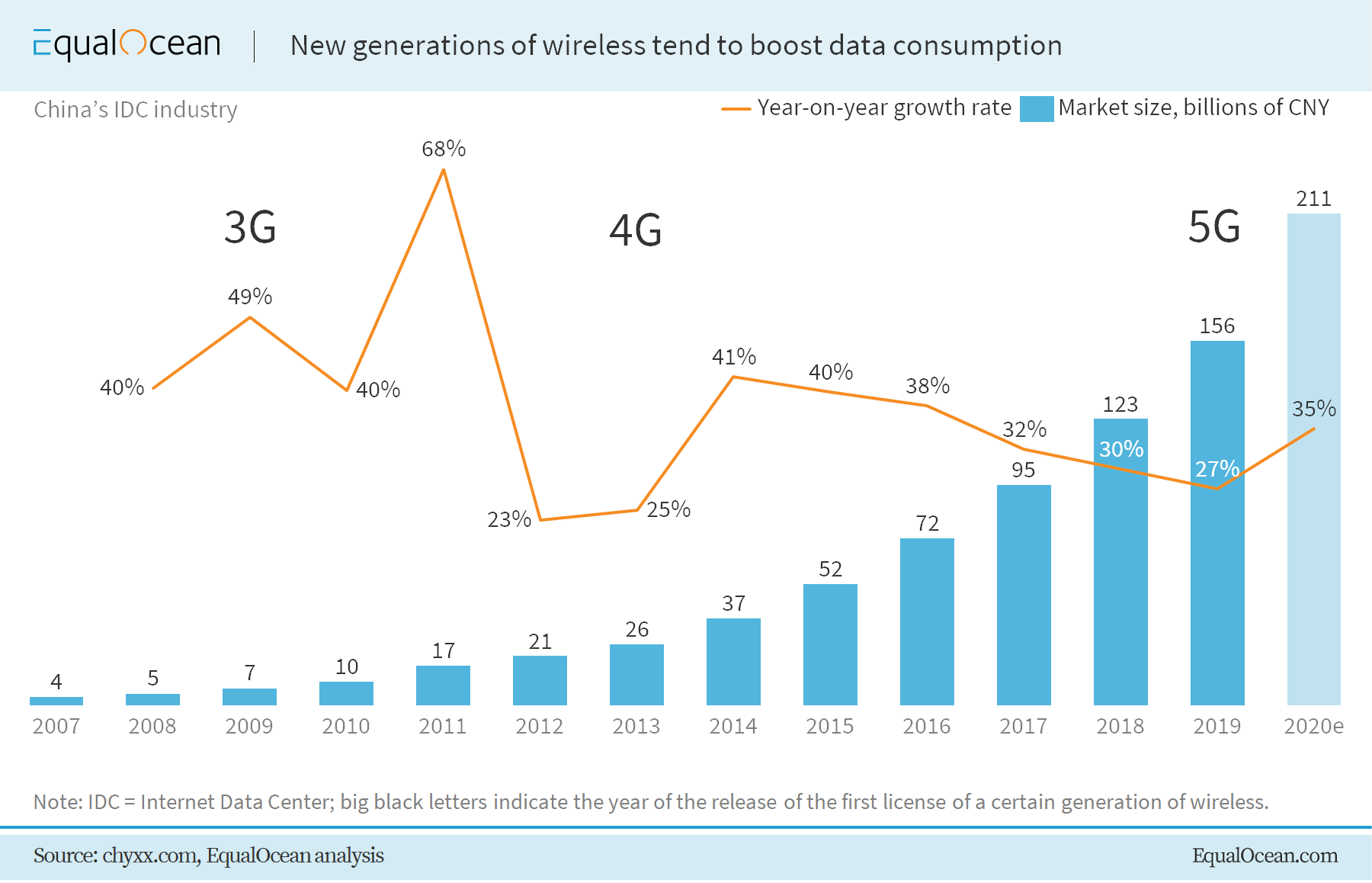 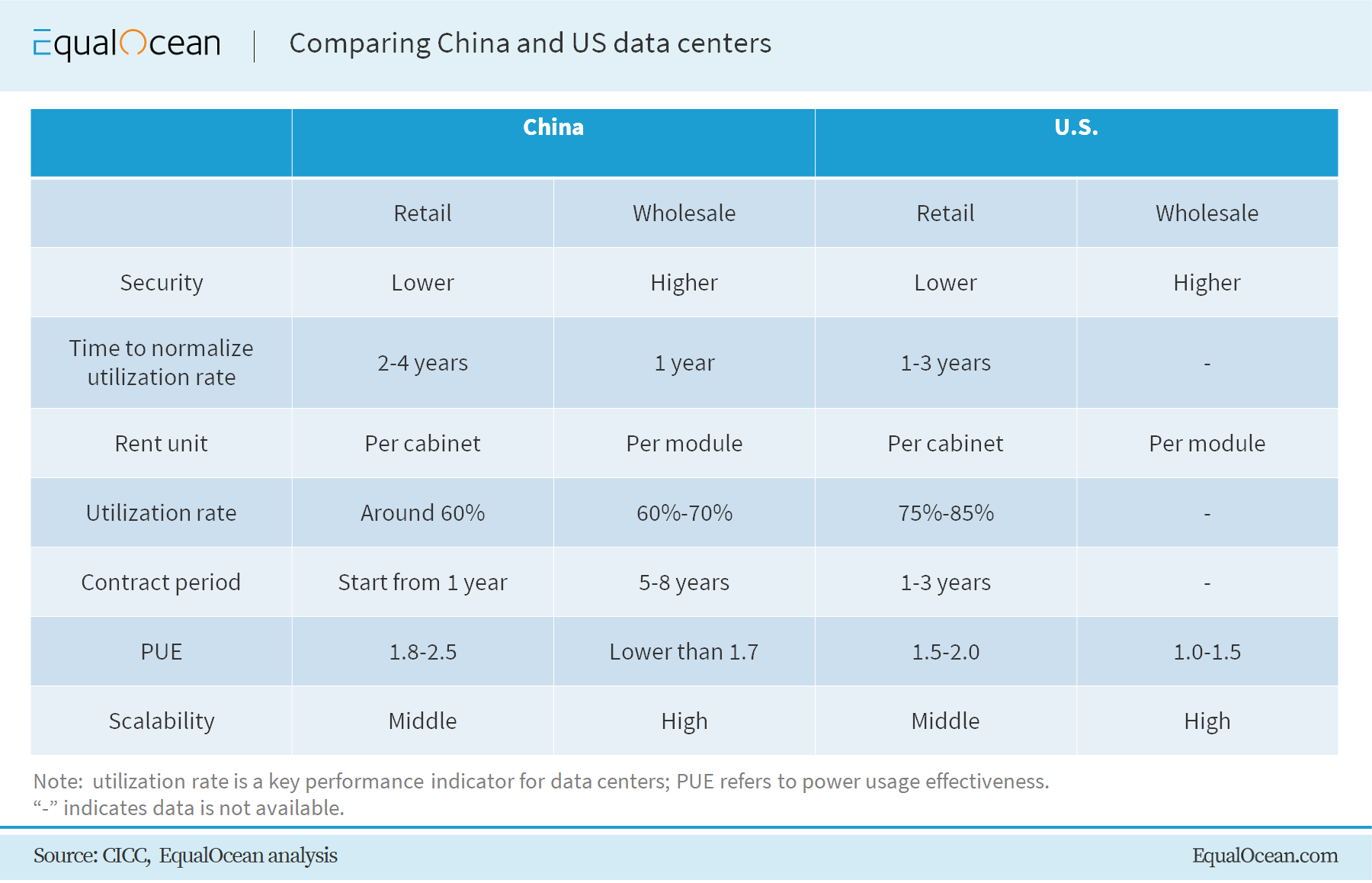 There are three types of data centers in China. China Telecom (728: HK), China Mobile (941: HK) and China Unicom (762: HK) are currently owning the most data centers in the country, leveraging their operational history in the space. Their cabinets are usually standardized, which often couldn't fit customer's various needs. Large cloud service providers are building their data centers in recent years. Some third-party colocation providers are increasing their cabinets dramatically, targeting future needs. 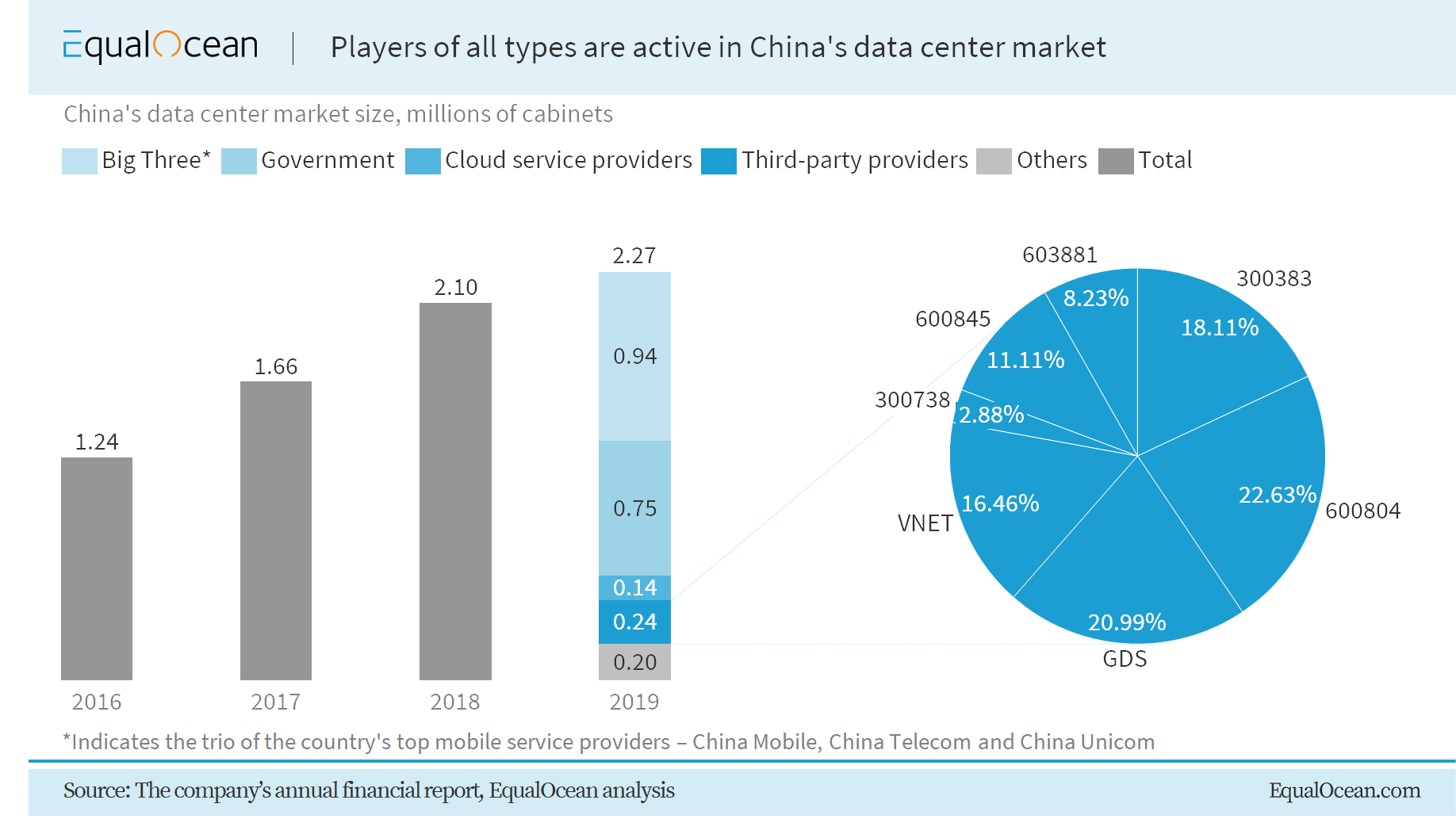 Besides, one key difference from the US is that the traffic or data is concentrated on giants like Alibaba (BABA:NYSE; 9988:HK), Tencent (700:HK), ByteDance and Baidu (BIDU:NASDAQ). Research showed that over 70% of internet traffic is from their applications. We think this also implies data centers clients' mixture. Data centers generating more revenue from big cloud players benefited from the relation, which provides business stability, higher and faster utilization and funding access.

Building data centers surround tier-1 urban areas and policy-friendly places are trending. Like other data centers in the world, facilities' locations are always closed to metropolises, which lower the key performance indicator of a data center: latency. What is more, differently, the Chinese central and local governments implement some policies on the building of data centers, 'new infrastructure' and Real Estate Investment Trusts (REITs) trial projects all set to accelerate data centers expansion.

We expect the business shifting to cloud, 5G adoption and AI will be the upcoming catalysts for a countrywide data boom.

With the rapid growth of China's cloud market, increasing downstream demand is on the docket. China's cloud penetration rate was much lower than the US level proven by the cloud revenue divided by IT spending. The reason is the late inception of the Chinese market. CAICT expects China's public cloud market size to increase at over 30% by the end of 2023. Currently, the Chinese cloud market is still in the early stage as the services mainly on Infrastructure as a Service (IaaS). Therefore, we expect the cloud market tends to move toward what happened in the US, which more revenue generated from Platform as a Service and Software as a Service. In the meantime, IDC will benefit from this trend especially. 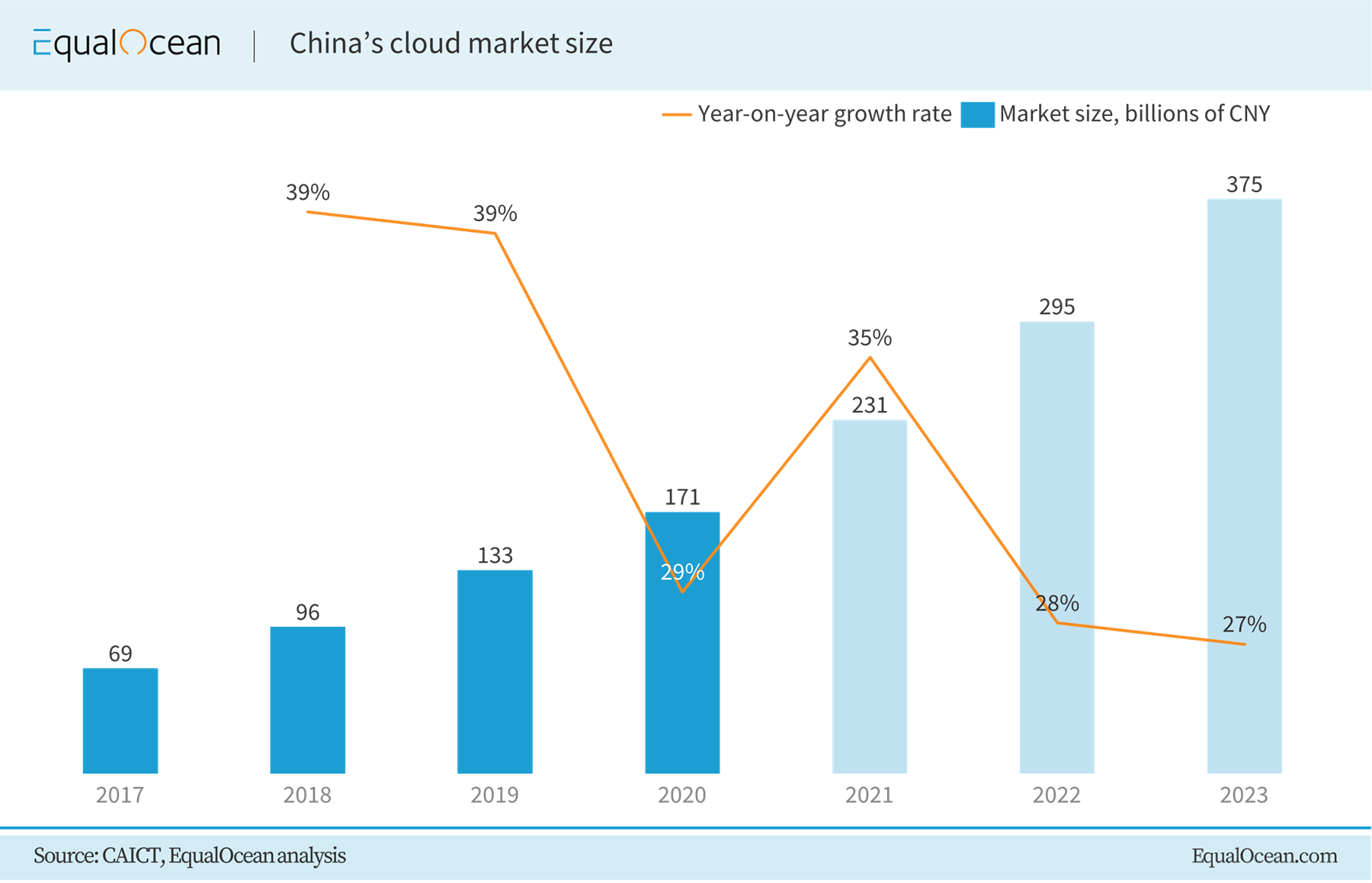 5G's adoption means an unpredictable upside opportunity for data centers. By the end of June 2020, according to the figure disclosed by China Mobile and China Unicom, at least 108 million users registered 5G bundles in China. Over 400,000 5G towers have been built so far and the target is to install 800,000 in 2020. With the adoption of 5G, we believe that higher resolution videos, cloud gaming, and self-driving cars can lift up the whole demand for data.

Specifically, consumers started to make and watch data-consuming videos mainly in 2k or 4k: horizontal display resolution of approximately 2,000 or 4,000 pixels. In the past several years. Still, the scenario was not very popular because of the lack of relevant content, unsatisfied internet connection and power systems. It seems these significant problems are gradually being cracked with consumers who are stepping into the 5G era.

Apart from videos, the development of cloud gaming is going to lift the data consumption. It will be adopted quickly as all the conditions are set out better, including low latency, stability, prices of 5G bundles and game offers. For now, cloud gaming consumes lots of data. Google's Stadia project was recently tested under the 4G/5G cellular. The test results showed the one-hour 360p game would spend 2.7 GB data. The figure jumped almost fivefold to 12.7 GB when running a 1080p game. We expect more data centers are set to be built to lower the latency.

Artificial intelligence companies will also ignite the data centers industry as they need lots of data to train their models. Theoretically, the more data trained, the model performs better. For now,  Gartner stated that 85% of AI projections will fail. The compute for AI is difficult as lacking optimized hardware. It takes days or weeks for training models. We believe that AI training tasks will keep growing fast as the improvement of related semiconductor equipment.

International Data Corporation reported the AI server shipment reached 79,000, increasing 47% year-on-year in 2019 in China. The report also revealed that the AI software market hit USD 2.89 billion. The whole market including hardware was USD 6 billion. Even the market is still in the early stage, we keep positive on its prospects. 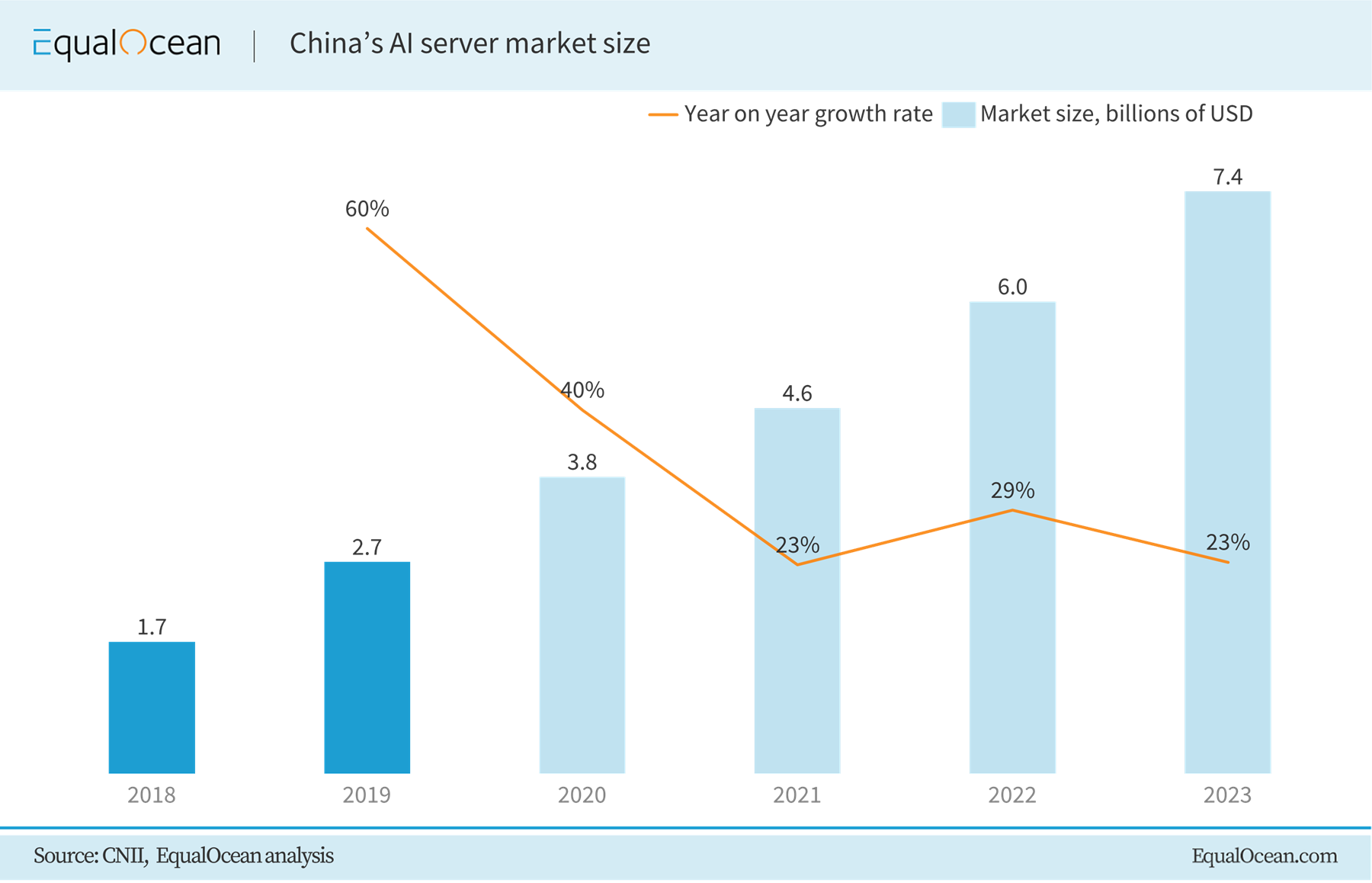 CONTACT US
Scan QR code to contact us for professional consulting services
Next article
Will China's DJI, the 'Apple of Drones,' Outcompete Intel and Qualcomm Again? [2/2]