The Tale of Chinese Flavor Continues – Initiate Bestore with Hold

The quality of snacks is still the base for successful expansion, and Bestore still needs time to prove its quality. 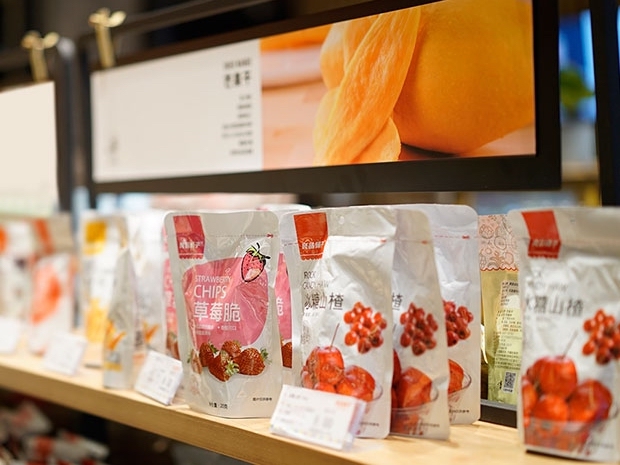 Bestore (SHA: 603719) was trading at 69.4 CNY as of August 7th, with P/E of 78.44x and a market cap of 28.47 billion CNY. As a rising local flavored Chinese snack brand in recent years, Bestore has earned its name in offline sales and is currently expanding its presence online, which was an opposite path compared to another giant in this specific field – Three Squirrels.

Coming off a great year in 2019 with 21% year-over-year net income growth and 25% EBITDA growth, Bestore has met some setbacks during Q1 2020 due to disruption in offline sales and supply chain. Increases in online sales became the backbone for its sales growth at the beginning of this year – Bestore recorded a 4.16% top-line growth in Q1 2020. As the macroeconomy recovers quickly in post-pandemic China, we expect to see Bestore’s top-line growth to be in line with Q3 and Q4 compared to last year.

Bestore started in Wuhan and operates mainly in central parts of China. Bestore has been continually revamping its brand image and expanding its presence to other parts of China. Now, it is aiming to shape its brand as a high-end Chinese snack brand, and we can see its effort through its logo change and its sponsorship to a popular TV show series in China with a backdrop of life among elite white-collar lawyers.

This premiumization has put less pressure on discounting prices on Bestore. Combined with a large offline presence, Bestore maintained a relatively high gross margin of 31% in 2018 and 2019, whereas Three Squirrels was consistently 3% lower. 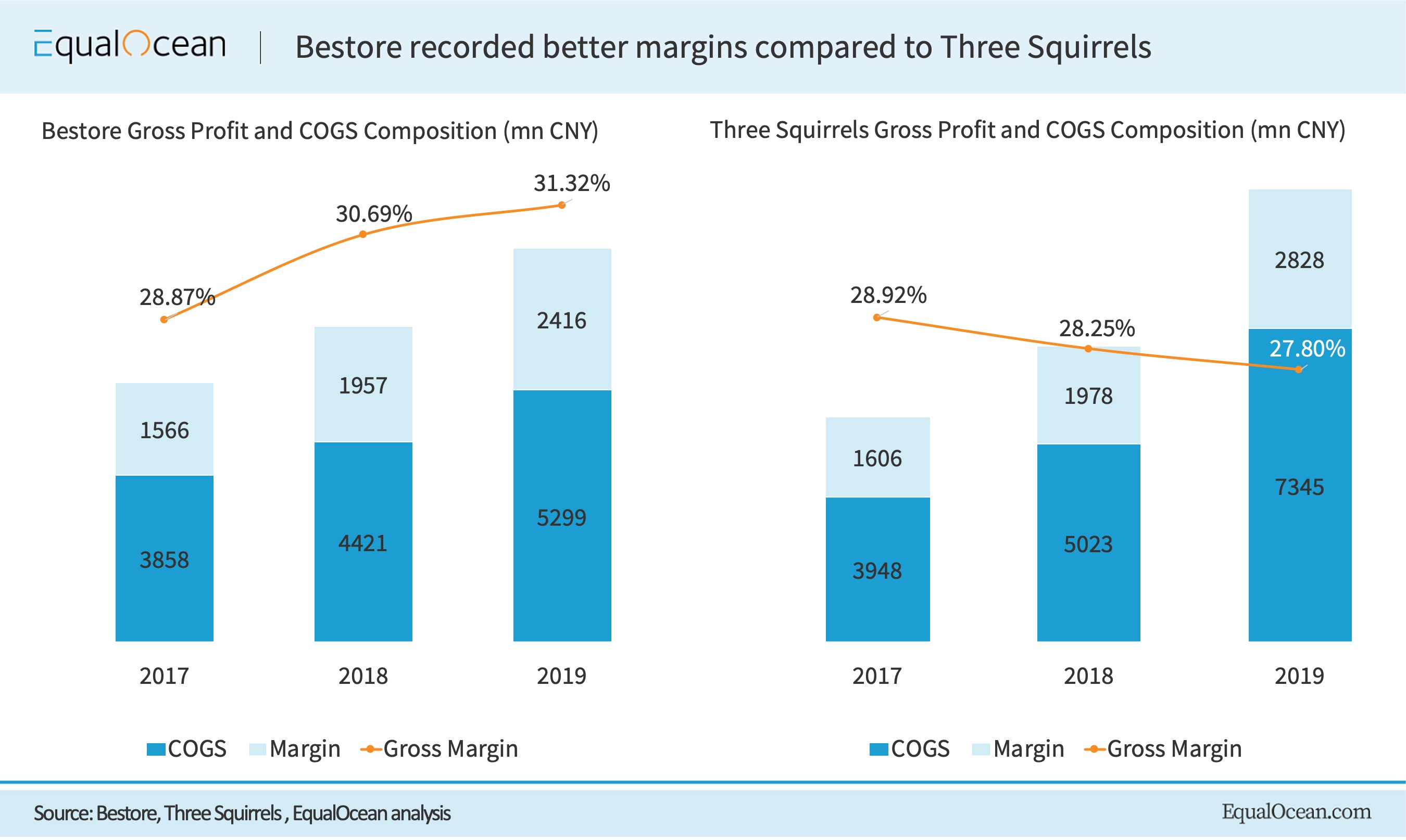 However, we view this success in downstream branding and sales activities faces an inherent concern in Bestore’s upstream quality. Similar to Three Squirrels, Bestore has thousands of SKUs and is constantly putting out new ones. The variety and fast-changing nature set a high standard for product quality and safety, especially for a premium brand like Bestore. Here, we see two risks that might threaten Bestore’s premium branding in the long term: 1. Little spending and focus on R&D can hurt product quality, 2. OEM models in manufacturing could cause more food safety concerns.

Regarding our first point, Bestore has been investing less in R&D compared to its peers. In both 2018 and 2019, Bestore’s R&D spending was <0.4% of COGS, which was lower compared to Three Squirrels’ ~0.5%. We should also notice that this percentage was calculated under the condition where Bestore had a higher gross margin. As the market for fresh snacks continues to expand, the ability to bring innovative snacks to consumers will remain a key competing element in the future. Being a premium brand, lack of effort in R&D can potentially fail consumers’ expectations.

Several trends in downstream snack retailing are 1. Small retail stores are being overtaken by larger stores opened in major shopping districts. 2. Online retailing is growing at a rapid speed while offline retail still seems to be a long term stapler for snack companies. 3. Synergies between various distribution channels are emerging, but there are still big potentials.

As for Bestore, we think it is reacting very quickly to shifts in the downstream landscape. In recent years, it is pursuing rapid offline expansion by 1. Shutting down smaller stores and opening large stores in major shopping districts. 2. Increasing the proportion of franchise stores compared to direct-managed stores. In 2019, Bestore closed 60 direct-managed stores and opened almost 300 franchise stores, echoing its plan. To this aspect, we see a trade-off between quality and quantity.

As direct-managed stores generate higher margins, increasing franchised stores can harm overall per store income - Bestore’s offline year-over-year per store revenue increased by 11%, 6%, and 2% in 2017, 2018, and 2019 respectively. However, this sacrifice in per store income also brings the ability to expand more quickly (stats here). Here, we want to point out two important aspects of Bestore’s offline operation: 1. It can efficiently manage its inventory, with a turnover of ~60 days compared to nearly 2x of its peers. 2. Its franchise model reaches a great risk and reward balance between the company and franchisees, which makes the model highly scalable.

Based on the aforementioned two characteristics, we see that Bestore can be greatly benefitted from a quick expansion strategy from a top-line growth standpoint. In addition, with Bestore emphasizing on growing its data and integrating technology tools in all streams, we see that offline stores can also add value by serving as reflection points on consumer preference and help Bestore to better manage its multi-channel operation.

As for online sales, we see Bestore’s sales composition reflect the growing online fresh snack sales. In 2019, online sales took ~50% of Bestore’s total sales, and this is a result of Bestore’s rapid expansion in online channels. Under current trends, we see that online sales have the ability to reach a wide consumer base quickly and are less subject to extraneous circumstances such as COVID-19, but the competition and high price sensitivity online also put pressure on snack brands’ margins. So, by having both high margin offline channels and high resilience online channels in its portfolio, we see that Bestore will be less subject to bottom-line risk.

With promising channel development, there are two concerns to Bestore’s channel strategies. The ability to attract franchisees presents one risk to Bestore’s expansion plan. COVID-19 brings hard hit to offline sales and the decreasing sales per unit in stores due to increasing competition from other brands and even its own stores and stretching franchises timeline to recover their initial investments. (With beverage retailers such as Naixue Tea, we have seen less motivation on franchisees due to decrease in sales).

Subsequently, another long term problem we see from Bestore’s expansion is the consumer retention issue. Among its online and offline consumers, only 20% of the people overlap, as most offline consumers make their purchases based on sentiments rather than habits. Relating back to Bestore’s premiumization strategy, although Bestore has been using it to build differentiation among snack brands, the lack of R&D and quality differentiation might not justify its price in the long term, and therefore not being able to retain customers.

We drive our price target of CNY 70.80 per share from a three-stage DCF methodology, assuming a WACC of 6.11%. Our projection implies a 1% upside, which is in line with the current market price - therefore, initiate with a Hold rating. Our revenue forecasts for 2020/21/22 are 16%/30%/20%, reflecting a downward pressure on offline sales due to COVID-19 in 2020, and a steady offline store and online sales growth in 2021 and 2022, similar to the scale in 2019. We expect gross margin will take a hit in 2020 due to COVID-19, and we expect overall gross margin will moderately rise to reflect a mixture of increase in margin through online and group sales and decrease in margin through franchise store expansion – growing from 29.6% to 30.5% and 30.7% in 2020/21/22 respectively. We also expect the inventory turnover will remain high at 66.9 days of 2019 going into 2020/21/22, as increasing offline stores and sales channels will pose more significant challenges for inventory management. We apply a 10% medium-term growth rate for 6 years, a 1% perpetual growth rate by referencing more mature global snack brands including Mondelez and PepsiCo. Our bull case and bear case scenario valuations suggest a 31% upside and 33% downside, respectively. 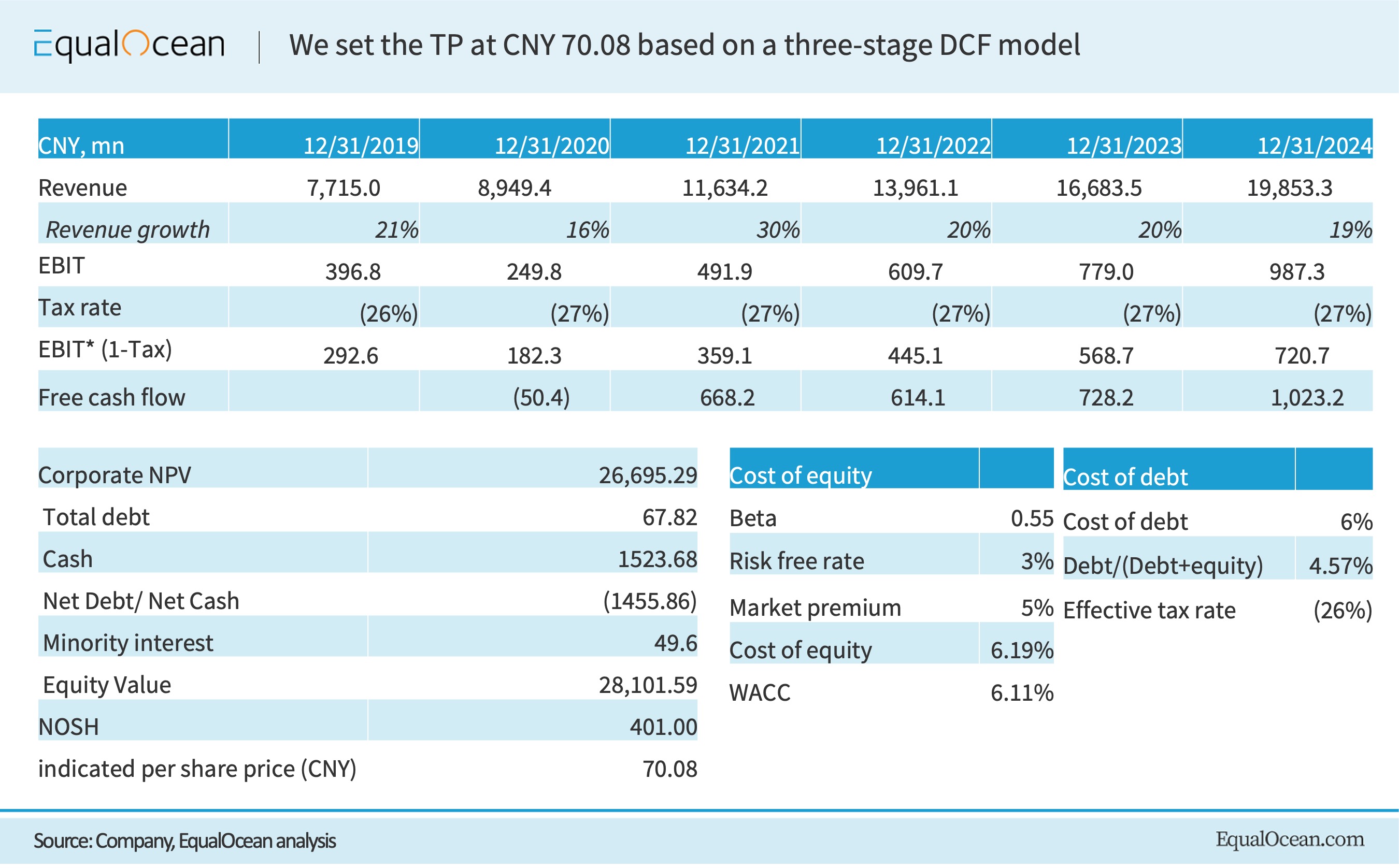 Regarding our valuation, we would also place caution on our WACC. The beta is currently 0.55, and if market sentiment shifts significantly in any way, this can further discount our target price. If Bestore also begins to employ more debt financing, we can also expect a higher WACC, and therefore a lower target price. 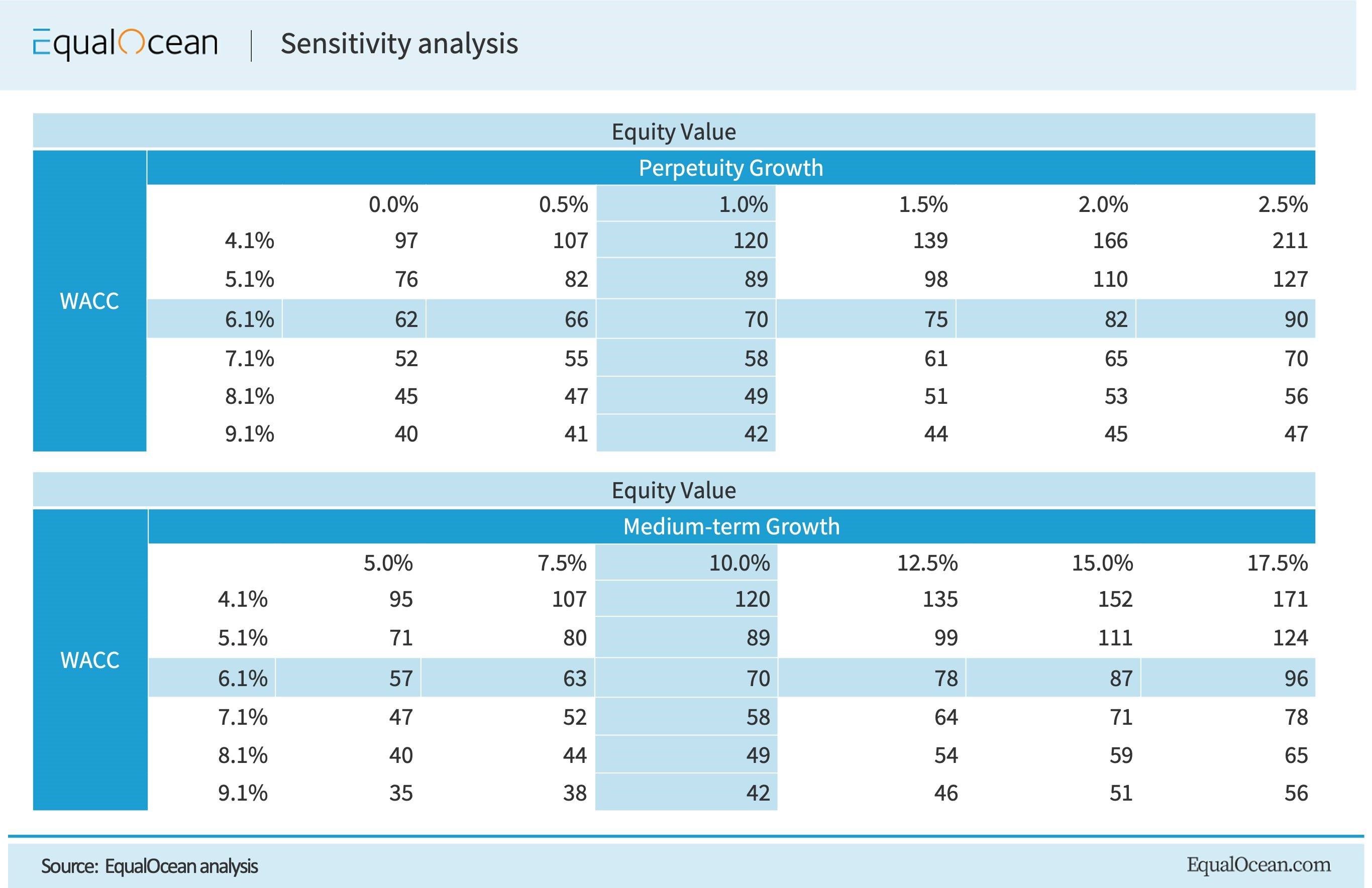