Local flavors are winning in the local market. 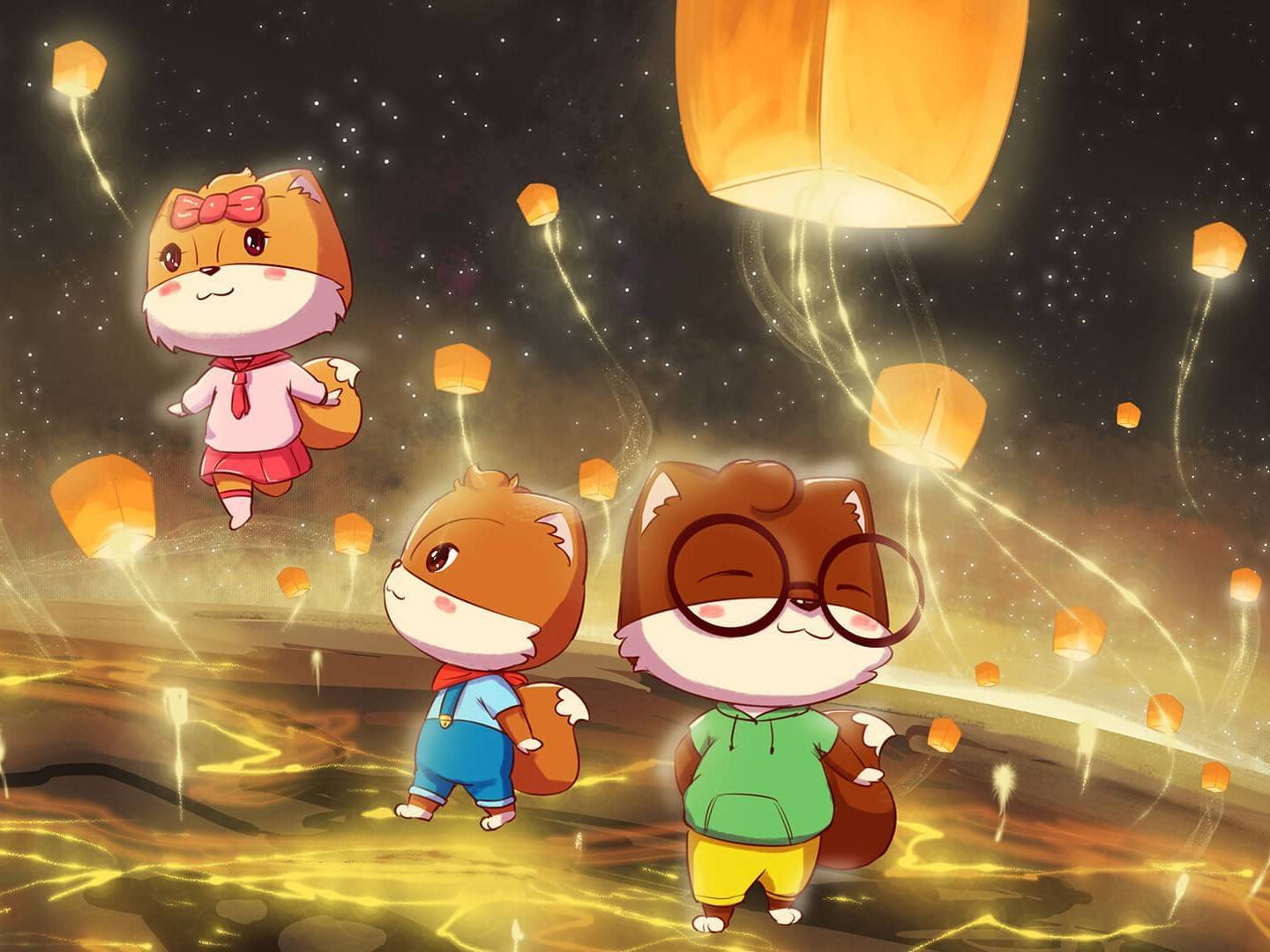 In the past few years, rising Chinese domestic brands have been winning millennials over with an array of popular western snacks, such as Oreo biscuits by Mondelez and button-shaped M&Ms from by Mars. Local snack retailers capitalize on the rise of online purchase habits, leveraging understanding of customers and building an edge over overseas competitors.

EqualOcean has been following the Chinese snack market and leaders, including Three Squirrels, Bestore, Juewei, among others, and we plan to release a research series on the companies. Our coverage of Three Squirrels is the first in the series. We think the company is well-positioned to capture the potential of an omnichannel pivot, turning away from the purely-online channel to expand horizontally and broaden its product mix.

Three Squirrels (300783:SZ) is a leading online snack retailer in China. The company was founded in 2012 by Zhang Liaoyuan. With nut products being the backbone of Three Squirrels’ sales, the company has seen exponential topline growth since its inception.

For hyper growth retailers that are born online, efficiency and cohesiveness in all streams of the production and selling process are still the keys that keep businesses alive and drive growth in the long term. In this analysis, we want to examine three streams of Three Squirrel’s current business model, including R&D, Supply Chain, and Channels.

China culture favors the snack – for food mad people, what could be better than making a portable diversion of your favorite activity.  As snack varieties have multiplied over the years, the ability to create best sellers (爆款) on internet platforms has become crucial to revenue generation for snack retail brands. For Three Squirrels, it was crucial that the brand was able to ride an explosive topline growth on the trend it created with its nut products in the first few years.

The success of the current generation of snack sellers can be attributed to innovation, quality, and advertisement. The latter two factors will be covered in separate sections. Here we will focus on how Three Squirrels is bringing its innovative products to light.

There are two distinct elements we see in Three Squirrels’ snack R&D effort: 1. It has been consistently increasing its R&D spending as a percentage of revenue; 2. With its topline and bottomline expansion, Three Squirrels has partnered with world-renowned brands to enhance its upstream efficiency. 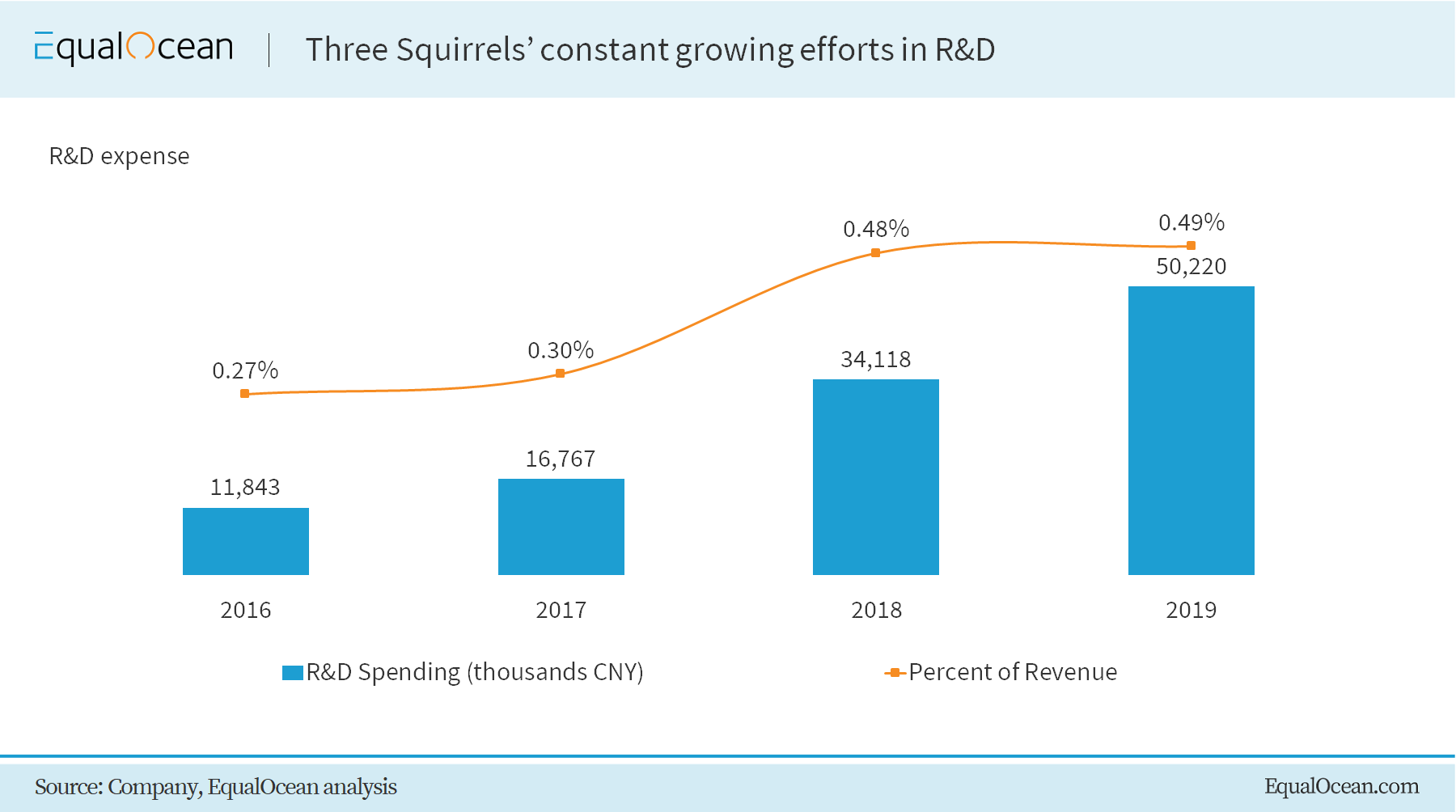 We think both initiatives from Three Squirrels are going to build an economic moat for the company. In terms of increasing R&D spending, this could help Three Squirrels to quickly develop fresh product ideas and the technology needed to preserve these products. The former is crucial as Three Squirrels taps into a larger and more varied consumer base. In terms of partnership, Three Squirrels established a cooperation (in 2018) with Danisco – a flavoring subsidiary of international conglomerate DuPont – to enhance the flavor of its new products. These two R&D edges enabled the company to quickly innovate and expand its portfolio of snacks. For instance, its new product “hand[sl1] -torn bread” (手撕面包) became a major revenue-generating force in 2019, extending Three Squirrels’ snack sales beyond nut products.

There is a concern associated with Three Squirrels’ R&D effort – its ability to meet consumers’ tastes across regions. As of now, the company's top source of revenue is the Eastern and Southern parts of China. It has a lower presence in Northern parts of China, such as Beijing. So, tapping into a profitable market like this in the future will be a challenge for Three Squirrels’ R&D team.

There are a few catalysts that are putting the supply chain in the center stage of this game:

On the demand side, as people from age 20 to 35 become the core consumers of snacks, they demand a higher variation and higher quality in snacks. However, there is an inherent tradeoff between shelf-life and quality of snacks. This means snack sellers need to have a supply chain capable of producing new snacks quickly and bringing snacks to shelves in shorter periods of time, in order to gain market share.

Supply chains also serve as a connecting point, as feedback flows from consumer end to upstream R&D. Having a cohesive supply chain is vital for companies to capitalize on current trends, expanding into new markets, and controlling inventories.

For ‘Tao Brands,’ intense competition and a high level of price-sensitivity in online platforms are squeezing out margins. Sustainable long-term profit depends on a combination of online and offline sales. Multi-channel sales are built on the basis of a flexible supply chain infrastructure.

This article is part I of our analysis on Three Squirrels. Please continue to part II.