Too Big to Fail 3.0: The Sky Is Clear for Tencent Cloud

This article is a part of EqualOcean's 'Too Big to Fail 3.0' series. Here, we discuss the challenges facing Tencent Cloud and the strategies it tailored to overcome them.

► A maverick in the cloud space, Tencent's arm is taking on its larger counterparts.
► It has a flexible business structure and a knack for client development.

Yet insignificant revenue – but excellent prospects

An Infrastructure as a Service (IaaS) provider, Tencent Cloud, like many large cloud service providers, offers a broad service menu, including standard elastic computing, storage and database. Even Tencent offers similar products to those of other players in the space, it has lately been growing at the fastest pace among its peers. Industry statistics and the Shenzhen corporation's official reports show that its cloud division's revenue grew by over 86.81% year-on-year in 2019, reaching CNY 17 billion. However, the cloud business' weight is still apparently small – it accounted for only around 4.5% of the total revenue in the same year. But the growth rate appears to be staggering.

Recently, Gartner ranked Tencent Cloud as the fifth player in the global IaaS public cloud market based on market share. The researcher also believes that the market will keep expanding fast because of modern companies' need for more flexible, high-capacity infrastructure. Besides, China's market is still at an early stage. Significant cloud demand is unreleased. For example, some horizontal applications like enterprise resource planning (ERP), Customer relationship management (CRM), Collaboration and so on are still in their infancy. In the future, it is practical that some Chinese enterprises like Salesforce (CRM:NYSE) offer various cloud solutions for many sectors. As the demand generated more from Platform as a Service (PaaS) and Software as a Service (SaaS), we expect more orders from the Chinese corporate sector, with Tencent Cloud's growth rate bouncing even higher.

A maverick in the cloud space, Tencent's Cloud arm is taking on its larger counterparts.

We can expect the future story of China's cloud market to be similar to what happened with the digital payment industry, when Tencent fell behind Alipay at first, then used their strength on WeChat to snatch clients. By the 1Q 2019, WeChat Pay had amassed approximately 40% of China's market, growing from around 23% in 2016. In the meantime, Alipay was losing its clout.

Check out our analysis of risks facing Alibaba Cloud in the Chinese market.

Compared to China's cloud leader Alibaba Cloud, Tencent's (00700:HK) drop back because it used to overlook the value of the cloud. In 2010, Tencent's founder Pony Ma called the cloud "just an illusion that needs hundreds of years to deploy." Nonetheless, when assessed the value of the cloud, Tencent swiftly launched its cloud project for business use in 2013. From 2013-2019, many criticized it as lacking customer support, internal supports and user-unfriendly on 2B business. To solve these problems, Tencent adjusted in 2018, reorganizing the corporate structure, starting to develop the cloud business in the 2B segment and assigned more resources on cloud business, which underpinned the fast growth afterward. 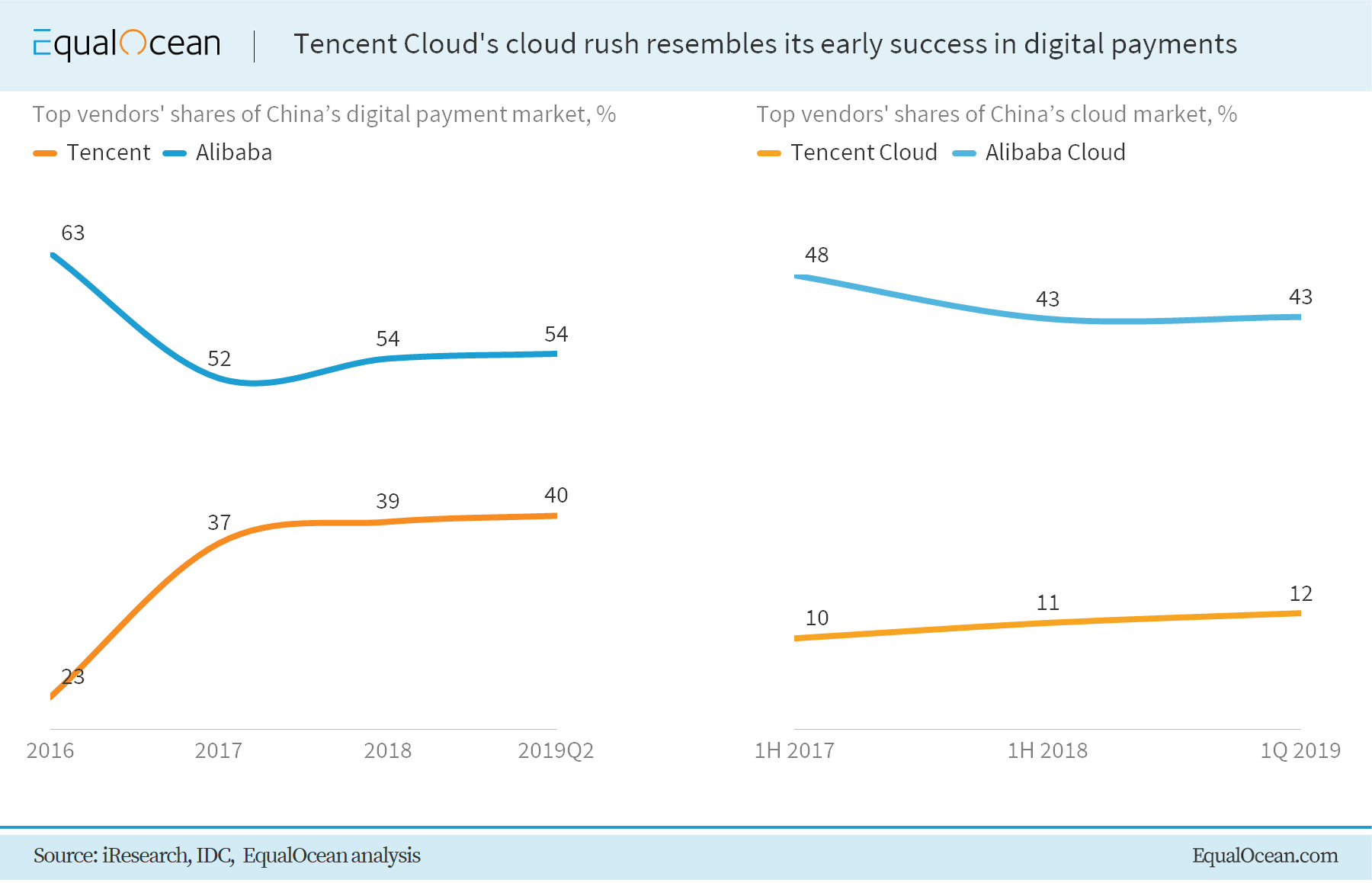 As for Tencent, they choose to lower prices, which share similar rates but offer more powerful computing. Besides, security is another area of Tencent Cloud's strength and is becoming more critical in the data-booming world. Tencent was famous for its cybersecurity competition with 360 security technology and employed many professionals in the area. Currently, Tencent owns a security team of around 3,600 professionals holding hundreds of patents – it is expanding the security business. By comparison, Baidu (BIDU:NASDAQ) and Alibaba are less active in the field. 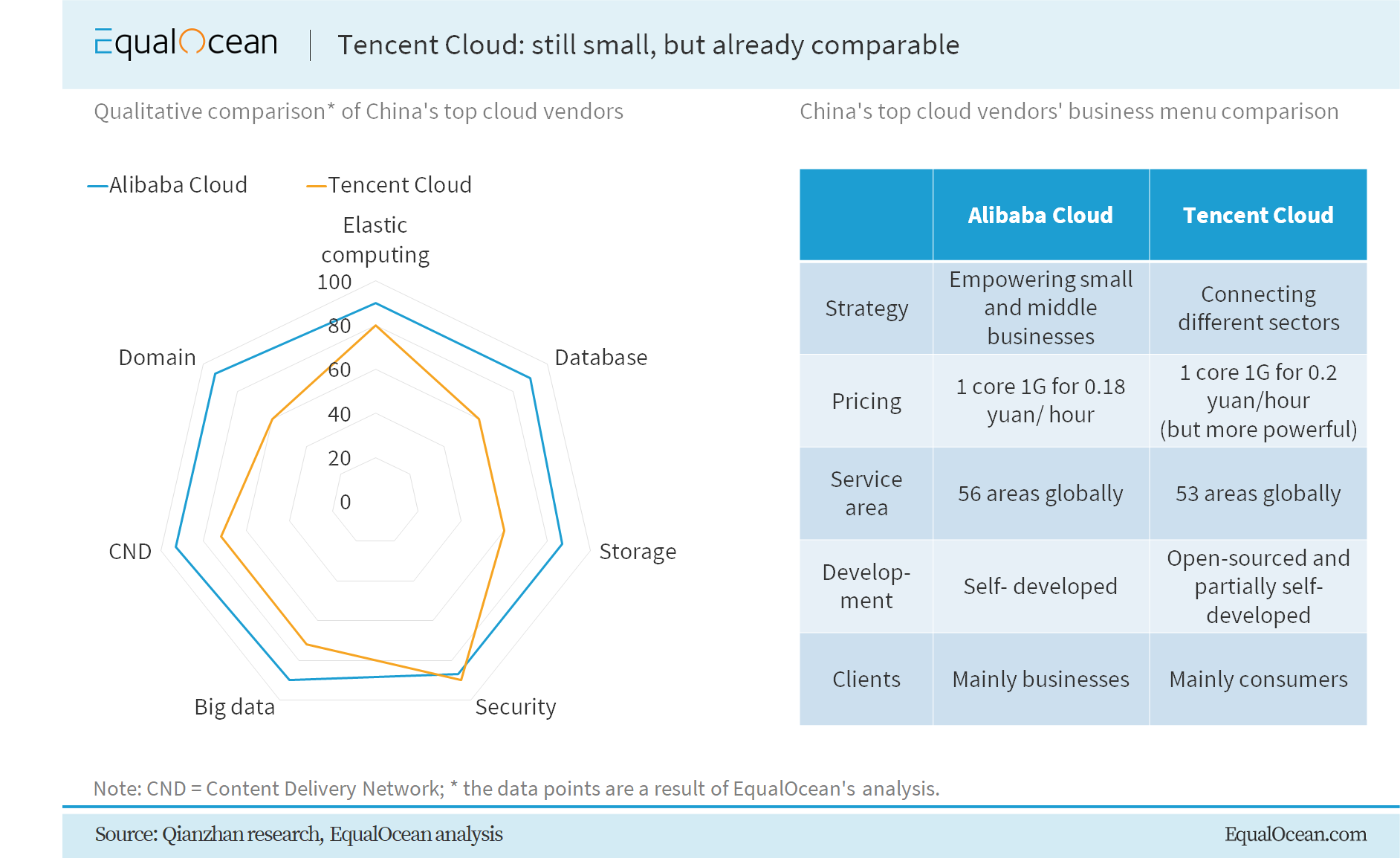 A knack for acquiring and serving customers

Differentiation is the key to the development of cloud business. Strategically, Alibaba Cloud is trying to empower small to middle companies. Instead, Tencent Cloud lowers its stance, positioned as a business supporter. Both of them are trying to find solutions on how to serve entities.

In terms of acquiring customers, Tencent Cloud may perform better due to its abundant experience. Currently, Tencent's ecosystem includes social media, gaming, video or streaming and other sectors with several popular applications serving over 1 billion consumers.

Nevertheless, Alibaba's strength on e-commence but substitute products like Pinduoduo (PDD:NASDAQ) and JD.com (JD:NASDAQ, 9618:HK) are available to consumers. Individuals can live without Alibaba's service instead of Tencent's. On the contrary, Tencent's ecosystem is more comprehensive from e-commence to pan-entertainment. It is likely that Tencent's strategy of combining cloud with other businesses would accelerate omnipresent growth.

In addition, China's cloud market will not be a the-winner-takes-all story. We believe that Tencent Cloud's penetration in its pan-entertainment map has a lot of rising opportunities.