►The concept of crowdfunding has long been leveraged by companies overseas in China; it went viral in recent years.

►Waterdrop and Qingsong Group, two of the main crowdfunding platforms, creatively turn traffic to the insurance client to balance donations and commercialization.

Crowdfunding can be traced back to the 19th century, when France was sending the Statue of Liberty to the United States, and the US wanted a granite base but suffered from a lack of funding. The New York World, a newspaper, issued a crowdfunding activity and raised USD 100,000 from 160,000 supporters.

The Internet transformed and elevated crowdfunding. In 1997, Marillion, an English rock band, was about to cancel a tour show in the US because of their limited budget – their fans raised USD 60,000 online for the band and made the show happen.

Two years later, the producer of the film 'Foreign Correspondents' initiated a USD 500,000 financing through the Internet from investors. This was the origin of crowdfunding with a return. From then on, the concept took flight as an alternative way of investment.

At present, the concept is leveraged by companies outside of China in many fields, including ones with investing background, such as equity and lending-based crowdfunding, and nonprofit ones, such as education and health support.

Because of the lack of insurance awareness in the country, lots of people and families felt dread when an accident occurred. The concept of charity-based crowdfunding, especially the donations for serious illness, went wild in China in this decade against this background. A large number of start-ups appeared in the field. Qingsong Group, founded in 2014, was the first crowdfunding platform in China. Then over 100 platforms evolved in 2016, including Waterdrop, the other giant at present.

Through a tense competition, Qingsong Group and Waterdrop left, together accounting for almost all the market in China.

Qingsong, invested in by IDG Capital in three months right after establishment with CNY 12 million, has reached 600 million users in over 180 countries. Now the company is seeking another series of financing with a valuation of USD 1 billion. Waterdrop, a young Tencent-invested platform, has been growing rapidly, with four capital series raised totaling over CNY 1.8 billion and 300 million registered users.

The overseas crowdfunding platforms tend to be narrowly focused. They charge based on the project or the services on certain percentages of the offerings.

DonorsChoose, an educational crowdfunding platform in the US, has raised capital for over 160 projects with over 38.44 million students. It maintains its operation by the fulfillment fee, processing fee and operational fee. FundRazr, another nonprofit crowdfunding platform from Canada, charges users on the advanced functions on its website. GoFundme, one of the largest crowdfunding platforms worldwide with a similar scale with Qingsong Group, operates based on the optional donations from users and the sharing profit from large institutions' projects.

In China, companies are ‘smarter’ to some extent. None of them survive solely on crowdfunding – instead, it is only the way for them to build traffic. Charities are non-profit businesses but companies need income to continue operating. Chinese companies strive to balance them innovatively. Waterdrop and Qingsong Group, for instance, serve as insurance agencies, transfer the users on crowdfunding to the insurance clients and generate profits, and keep the crowdfunding platforms entirely complementary, which benefits the users who are already short of money, and helps the companies to gain large traffic.

Now they have become comprehensive platforms with multiple health related services. Through cooperation with the insurance companies, Waterdrop and Qingsong share the traffic with them by delivering precise and customized products to users.

The 'crowdfunding + insurance' model developed by Waterdrop has finally brought profit to the company. In the first half of 2020, the company had a monthly insurance premium of CNY 1 billion that contributed to the positive net income in April and May. Also, the large cashflow of around CNY 550 million every month on the crowdfunding platform generates interest income as well.

Qingsong Group also debuted in the insurance sector later with users totaling over 50 million now. The online insurance model enables people with low income to pay the premium over payments. It also provides insurance companies with an alternative way to reach out to the clients at a low cost. In 2016, the company first launched a ‘mutual plan' that enables the users to invest and help others in advance, which just like insurance. The creative way is that every user will become a membership with certain money invested. If any of them got sick, the rest of the membership can use the money to pay for the bill. The ‘preventive awareness’ strategy has been applied by Waterdrop later as well.

At present, the crowdfunding platforms, led by Qingsong Group and Waterdrop, have become the main channel for the online insurance market in China. 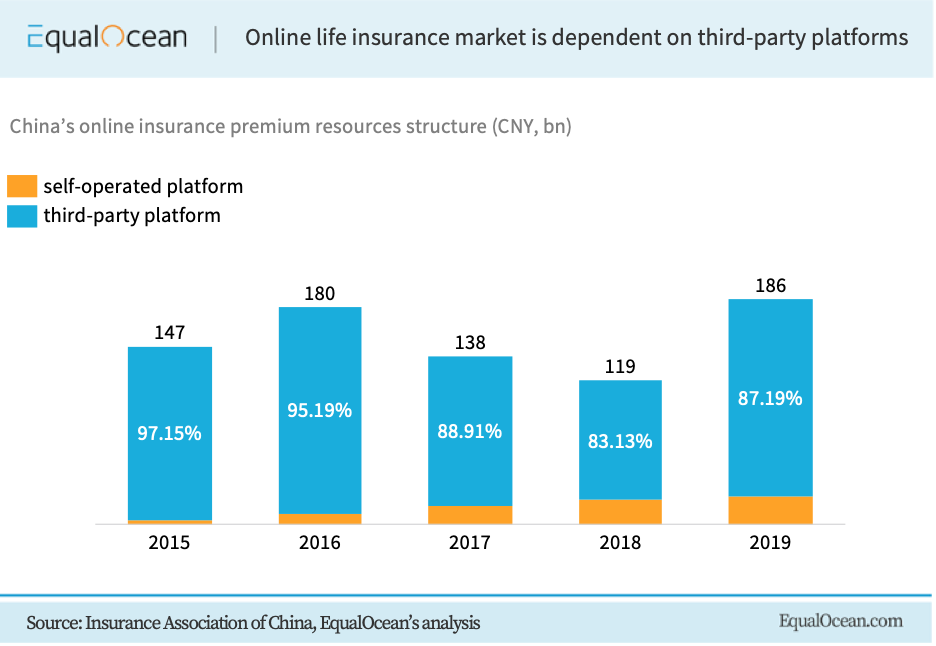 What is more, from the graph we can see the online life insurance companies are mainly dependent on third-party platforms for promotion, with the ratios all over 80% in the past five years. The market is providing a large amount of room.

With their undisputed position, the crowdfunding platforms have shaped the insurance industry in China.