What is DCEP and how will it affect the current market structure? 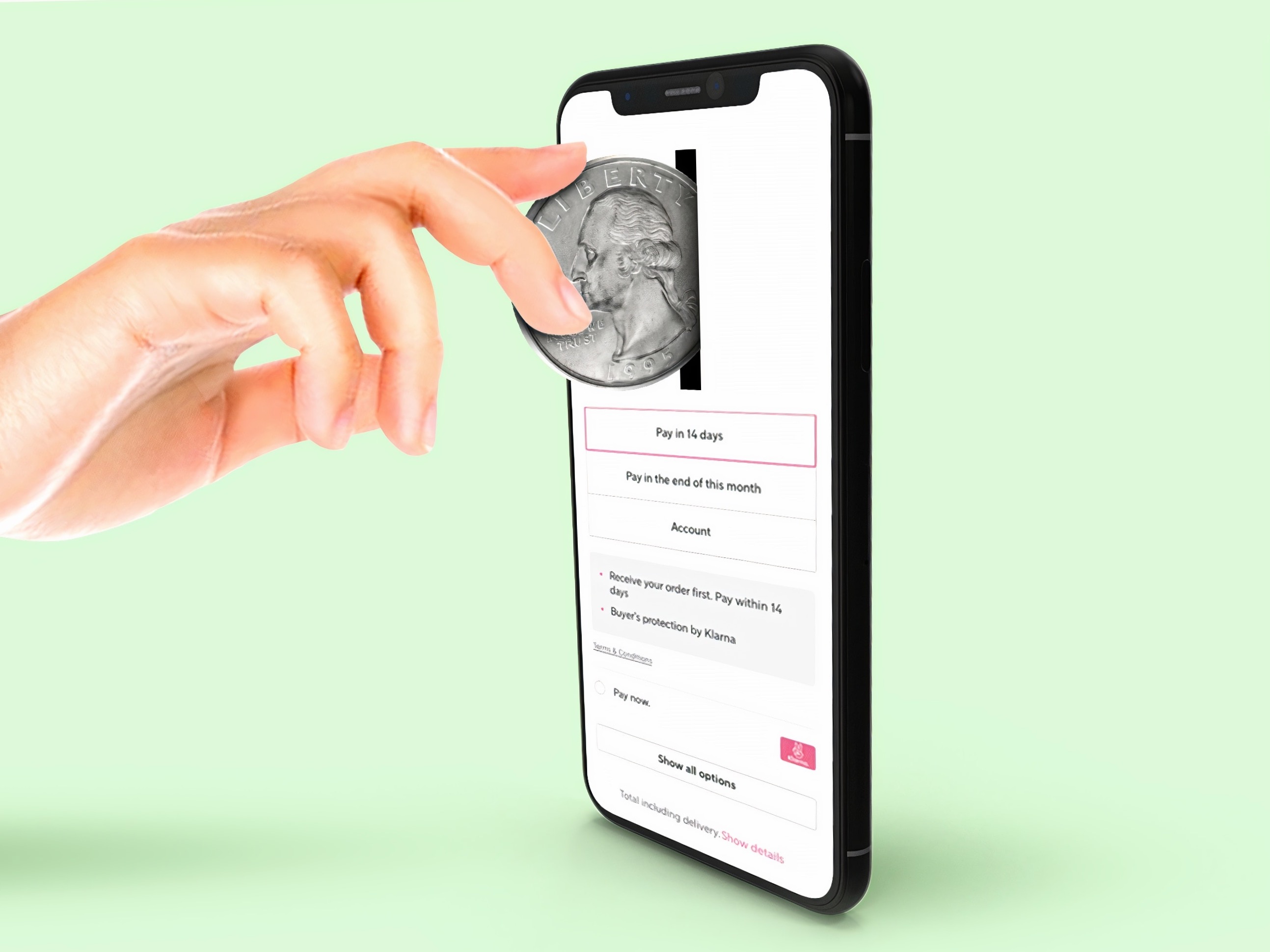 The new project’s competitiveness in the market is yet to be determined.

China has been planning to replace the bills with digital currency since at least 2014. On  August 3 of 2020, the central bank announced the launch of Digital Currency Electronic Payment (DCEP).

Along with the launch, some Chinese Internet companies have reached an agreement with the central bank to pilot the digital currency trial. One example is the country’s ride-hailing giant DiDi, which has inked a deal with the monetary authority to apply and test the digital yuan in the smart traveling field.

Meituan Dianping (03690:HK) is another case: the local service provider, with daily transactions over billions of USD, is also discussing the application of DCEP.

What is more, the state announced that DCEP would be tested internally in Shenzhen, Suzhou, Chengdu – and Xiong'an, a Beijing's satellite town that has recently attracted a significant amount of investment from the government, which is planning to turn it into China’s next innovation hub. Some government employees in Suzhou have even started to receive their payrolls in digital yuan.

Looks like DCEP is starting to reshape the public's life in China now. Let us take a closer look at the new buzzword.

In light of factors like the increasing anti-counterfeiting costs on issuing paper notes, but with decreasing usage frequency, and the attraction of more efficient supervision, the central bank debuted the digital yuan.

Apparently, DCEP is to be introduced to cover the concept of electronic payment in general in China – the name hints that DC represents the new form of cash, and EP is to be the new payment. This naming approach is therefore broad and ambitious, and both builds upon and may occlude the developments of the digital giants.

In a report published by People's Bank of China, the proportion of digital payment usage among adults in China was recorded at 82.39% at the end of 2018. Even in the rural areas, the penetration surpassed 70%. The liquidity of cash is increasing, but in a digital form instead of the bills.

The digital yuan is the M0 (see the explanation in the chart below), which represents the cash in circulation in macroeconomics theory, and the virtual form of cash will not impact the currency issuance. With the application of blockchain, the central bank can easily track the entire cashflow chain with every payment identified. Unlike Alipay and WeChat Pay, DCEP is a complimentary and legal tender that can never be rejected by any merchants. 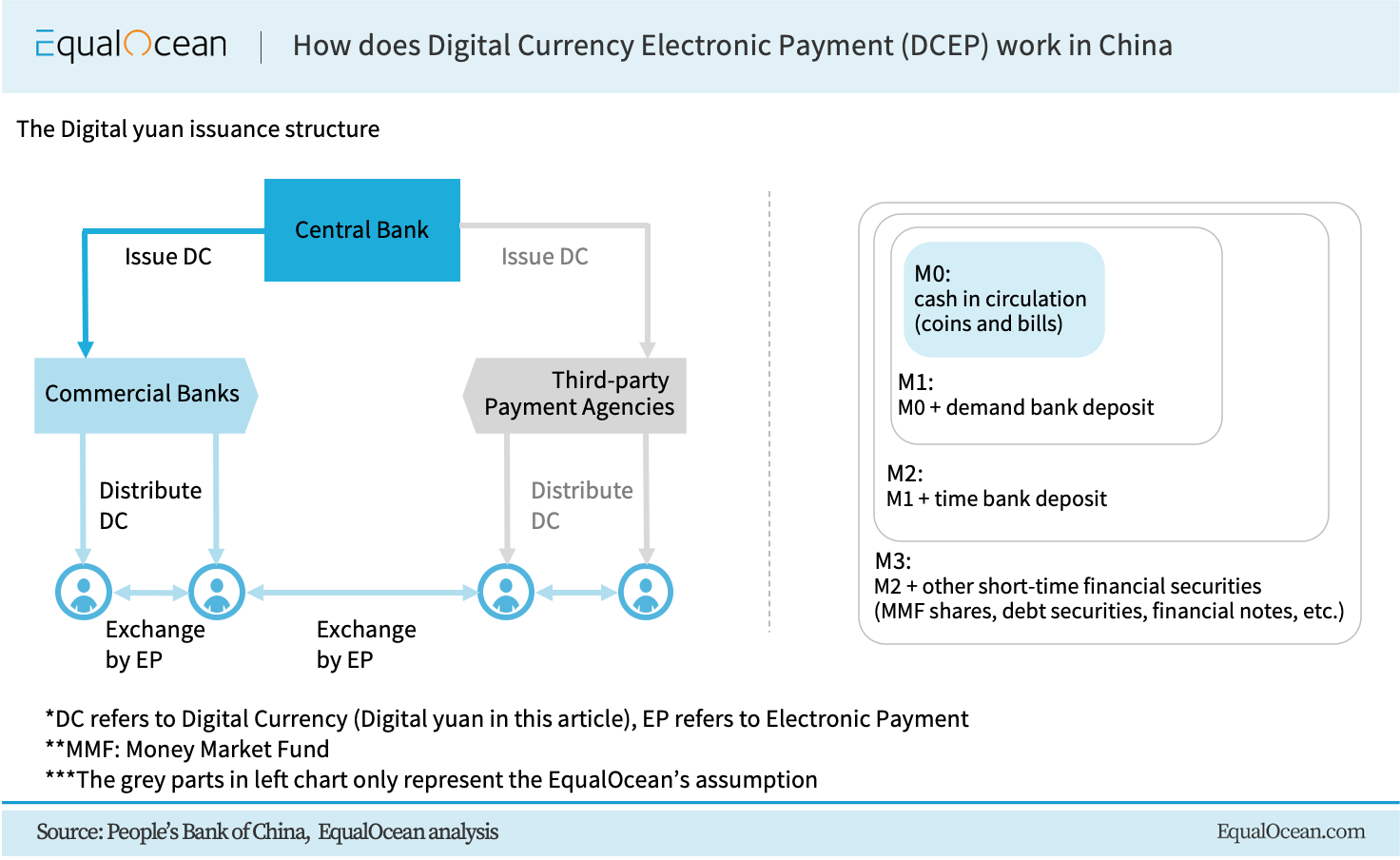 Similar to the bill-issuance before, the digital yuan will be issued by the central bank to the commercial banks, and therefore be accessed to the public with normal banking services. The certification authority, the registration center and the big data analytic center associated with the DCEP, enable the central bank to monitor the currency circulation easily and therefore apply the monetary policies timely and precisely.

Is it set to replace Alipay and WeChat Pay?

According to the data from iResearch, the total volume of transactions facilitated by third-party mobile payment platforms reached CNY 53 trillion during the first quarter of 2020, with Ant Group's Alipay and Tencent's WeChat Pay accounting for 55.4% and 38.8% respectively.

Some voices even state that the launch of DCEP is intended to weaken the dominant position of the private sector in the payment industry. Systems such as Alipay and WeChat Pay, which own a large amount of user-related information on the public, have an influence related to the identities of much of the public which the government wishes to redistribute. Is it true?

DCEP is using a Digital Yuan which is still a form of 'cash' – but intangible,  and made by binary codes instead of paper. Alipay and WeChat, on the other hand, are considered to be M2 and M3, using the money in the bank account most of the time. The public can even choose to use debit, credit or even Ant CreditPay (Chinese: 花呗) for purchasing – these are all simply mean to make a transaction.

Also, Alipay and WeChat Pay are the perfect ways for online shopping as it has been linked to almost all online malls in China. While the digital yuan, as a substitute for cash, are being used offline.

WeChat Pay and Alipay, in fact, are barely payment agencies, as they really link the merchants and the users. They provide discount coupons and serve as businesses' news and updates distributors, which attracts people to use the payment methods. DCEP, on the other hand, just provides an alternative payment method for the public.

Does this mean DCEP is non truly an innovation either? Not at all.

It should provide added convenience for the public. Unlike third-party payment agencies, DCEP is backed by the Chinese government and the digital yuan serves as the legal tender, which means no one can refuse a DCEP payment legally.

What is more, the DCEP will be used wider as it can work without the Internet. The transaction can be done easily by the physical touch between two devices. Also, it is entirely free for the public to transfer money between their bank accounts and withdraw to the DC wallet without transaction fees, which is a paid service in third-party payment platforms.

Also, DCEP has certain advantages in curbing crime. In the past, M0, the physical bills, is easily lost and anonymous. The digital yuan is based on the blockchain technology that carries the identity information of the holders. It enables the state to track and supervise but the information are strictly confidential to non-state members.

Therefore, DCEP is likely to hurt Alipay and WeChat Pay to some extent, since the latter ones have cash depositing functions as well, which functions as an e-wallet. The same smartphone-based paying method means fewer users will be left on the third-party payment agencies, with more people using DCEP.

Future of both sides: Competing or cooperating?

Though it is said that DCEP will be biting the payment market as soon as the debut, we don't think it will continue the competition for long.

Eventually, it will depend on the market. Public will choose the most convenient one to use. As people are used to powerful Alipay and WeChat Pay, it is hard for DCEP to simply replace them.

A more possible assumption is cooperation. DCEP fits third parties – those digital world residents whom are so fluent and adept at moving between platforms and layers of service will find it helps them in their navigations.

As Alipay and WeChat Pay resemble 'private-owned banks' they could become one of the layers of digital currency services providers working with other state-controlled or state-owned commercial banks to distribute the digital yuan to the public.

The future path for the DCEP is still unknown, but it is certain that digital currency is a general trend of technology development – not only in China.  China’s case will likely see it coexist with the paper note in widespread circulation in the foreseeable future. It might be also used in more fields, from M0 to M1, M2, even M3, to reform the monetary system overall.