With the information revealed in the prospectus, quite a few problems have come to the surface.

In the first part, we focused our analysis on the risks presented by competitors domestically. Here, we discuss other perils Ant Group is facing.

Ant Group is expecting to invest 10% of the IPO offerings in the global business. But with it stepping into more regions globally, it is facing more international competitors and issues.

PayPal, the global counterpart of Alipay, has been deploying in the payment industry for over 20 years. Though it has been beaten by Alipay from the perspective of transaction scale and total users, it has certain advantages. Alipay mainly focuses on the Chinese population that it aims to help in overseas online shopping and international traveling. Within the 1 billion users globally, over 70% of them are in mainland China. PayPal, on the contrary, has a more balanced structure, with 43.86% of the users from the US, 17.61% from Germany, and 14.39% from the United Kingdom. Therefore, in exploring the overseas market, PayPal is indeed more competitive than Alipay, which might impede the latter's global development. What is more, Venmo and Xoom, PayPal's US-domestic and international P2P money transfer platforms, offer similar functions with Alipay. PayPal Credit, a consumer credit product that can be used on online shopping and personal transfer, also competes with Alipay over global users, especially in the powerhouses with the highest growths in mobile payment, like Vietnam and the Middle East. 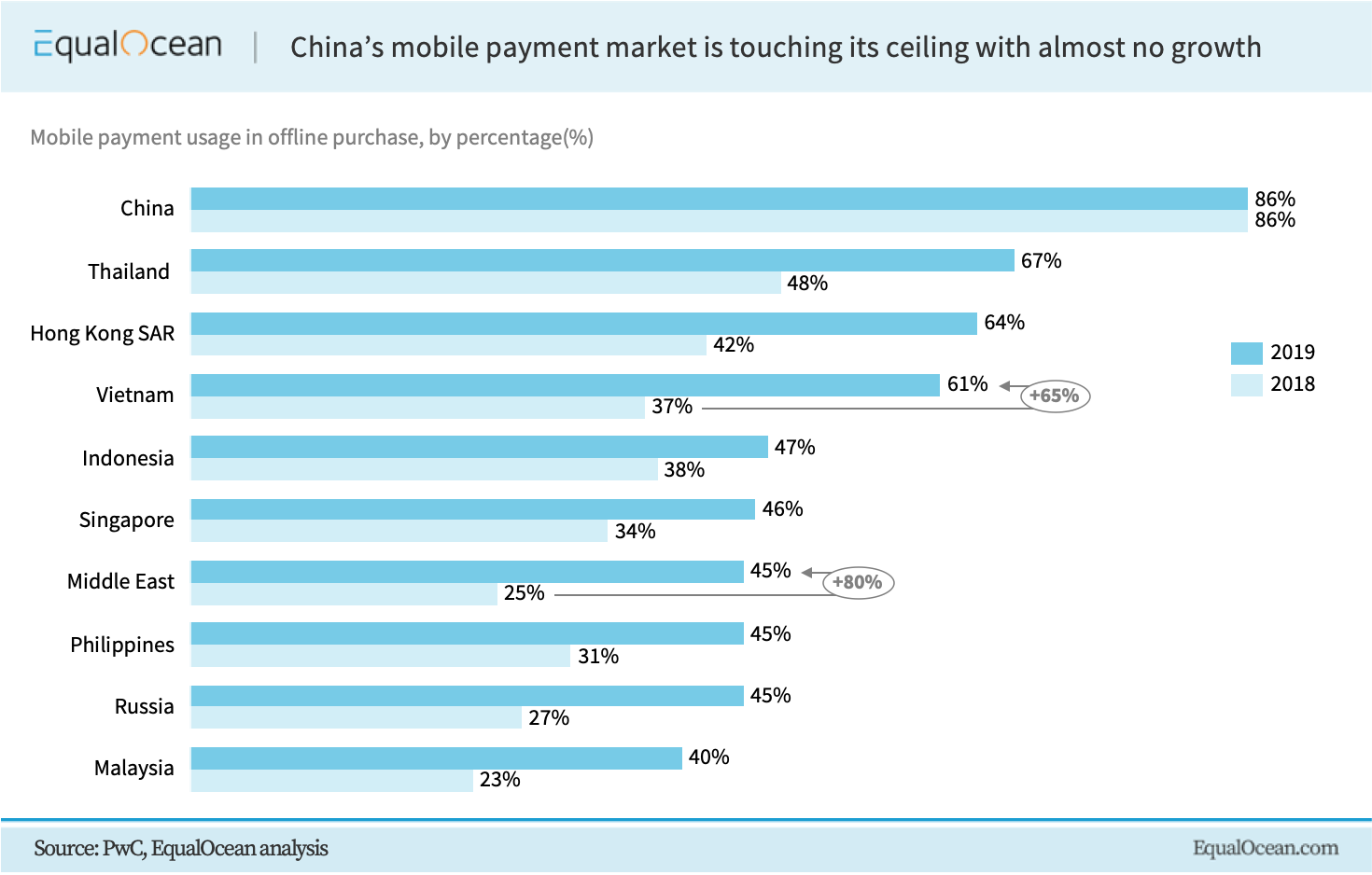 As we can see, China's mobile payment market has almost reached its ceiling, which means the overseas market is one of the third-party payment agencies' development emphasizes. As WeChat Pay gains more recognition domestically, it is also a large competitor of Ant Group in deploying global payment services for the Chinese population.

Some other risks, such as geopolitical issues, will also influence Ant Group in taking its overseas business forward, stunting its investments and therefore putting the company at a disadvantage when competing with local players. One example is the failed acquisition of the US money transfer company, MoneyGram, after of the intervention of the US state to prevent it, as well as the timing consideration in matter of the capital raising for the Indian food delivery company, Zomato, after changed regulations on foreign investment.

Regulations are impeding its credit business

Financial-related companies are always under the government's close surveillance. Although Ant Group repositioned itself as a technology company, it is still operating closely with financial services.

In 2019, the central bank of China released its 'FinTech Development Plan for 2019 to 2021' and stated that a standard system for payment QR codes would need to be addressed in years. The uniform standard will enable the merchants and individuals to each have their single codes despite the payment agencies, which means customers can choose third-party payment providers, like Alipay or WeChat Pay or even China Union Pay, by scanning that single code when purchasing. It is still unclear when the new project will be officially launched, but it is probable that significant negative effects will be put on Alipay and WeChat Pay as many currently unpopular payment methods may be welcomed in the future.

What is more, the state is keeping its eyes on the micro-credit market as it has high importance for the economy – but also high default risks. The Supreme People's Court cuts the higher limit of judicial protection for private borrowing rates in August of 2020, which is calculated as four times of the one-year Loan Prime Rate (LPR) every 20thof each month. Based on the LPR released on September 20 of 3.85%, the protection ceiling is addressed at 15.4%, which is significantly lower than 36%, the figure it used to be. Ant Cash Now (Chinese: 借呗), therefore became the most-affected product of Ant Group as its highest estimated annual interest rate can reach 23.73% – calculated from the daily limit base of 0.065%. This new regulation has no doubt dramatically affected the large number of non-banking agencies that are not yet to be reclassified as financial institutions. If Ant Group isn't recognized as a financial institution, its profitability will be significantly influenced.

And by the same logic, as Ant Group serves as the agent of selling financial services products, it is constrained by certain related regulations as well. As the state is still improving supervision, it is still unclear what new rules will be implemented on the company and how they will damage its business.

Also, when regulation comes to the financial institutions that cooperate with Ant Group, the services of the company will be limited as well, especially for MYbank, the most important partner of Ant.

Financial institutions are getting more independent

Financial institutions (FIs) themselves are raising their investment in fintech, which might weaken the dependence on the technology providers, such as Ant Group. The company controls risks and offers other technology-based solutions to medium to small FIs but doesn’t provide risk management services to large ones.

As large FIs are spending more money on technologies, such as cloud computing, big data and AI, some innovative products can be developed, such as smart financial advisors and smart loan collection. Many of which are used to be the solutions provided by companies like Ant Group. As fintech becomes trendier among FIs, especially for the larger ones, Ant Group is losing its advantages – it can only keep them if it stays at the top constantly.

A dubious journey: The aggressive expansion

In order to explore more fields, Ant Group announced that it would upgrade Alipay from a payment tool to a life platform, which was an unpredictable move for many observers. By teaming up with Ele.me, it is now taking on Meituan Dianping (03690:HK) within the digital life service area. In the prospectus, Ant Group also states that this is a “dubious journey with an unclear future to generate profits.” What is more, the company is aggressively investing and exploring new fields to build itself into a versatile fintech firm. Before all these developments are successfully transferred into mass products, risks abound. But Ant, as usual, looks set to continue to be a regular and powerful presence, no matter what.