With its well-integrated business structure, the technology giant has built a moat in the Chinese market – and is going to expand abroad. 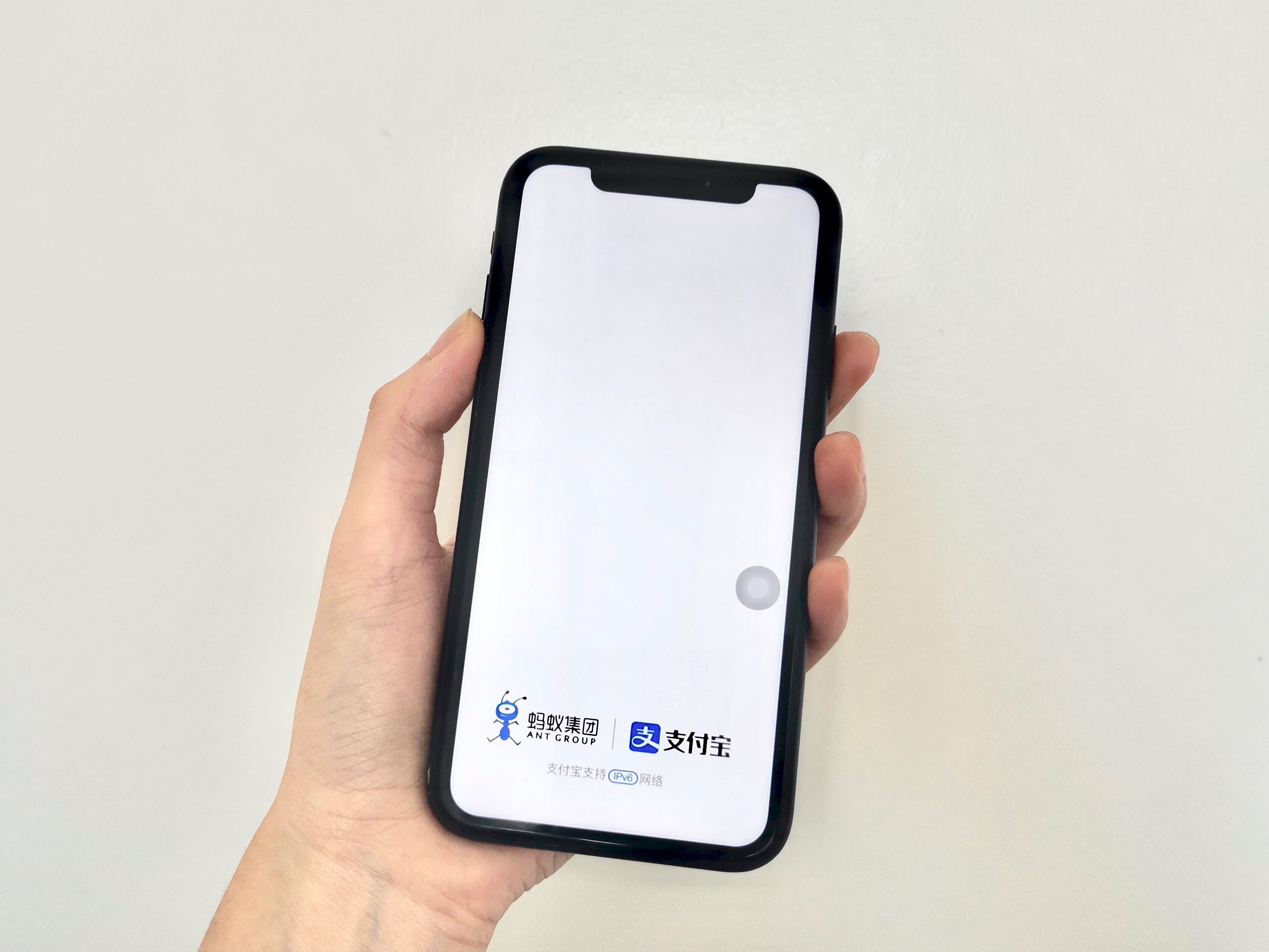 Ant Group's upcoming IPO is among the business world's biggest stories in 2020. The massive listing will give the company the Shanghai bourse's Star Market's largest stock. But the scale is not the only reason. Much of the attention comes from what the firm is equipped with.

The result of decades of development, Ant Group has formed a clear business structure in which the services and products on the top are supported by the technologies at the bottom layer. All of them are well-integrated, making the firm a huge money-making mechanism with no analogues in the market.

►Blockchain-related technologies form what Ant Group bets on in the long run.

►With AI algorithms, it is building a smarter and securer finance environment that surpasses competitors in many ways.

►The increasing investment in computing power pushed Ant to the world's top position.

►The closed-loop nature of financial services differentiates Ant from its competitors.

►A peculiar combination of global and local strategies, which is reflected as its nine local ‘Alipays,' shapes Ant's overseas market positioning.

►A number of ample industries, such as the payment market, the credit market for both individuals and small businesses and the technology market, fuel the development of Ant Group.

The international trade legacy made London the first financial center in the world, the capital markets turned New York into the second and the technology disruption is likely to propel the development of another city or region.

Fintech companies are therefore trying to keep themselves up to this trend. Ant Group, now a self-proclaimed 'technology company,' indeed, has its technological advancements that empower the versatile products and services. The technology established at the bottom layer, supports the higher layer and drives the company for sustainable growth.

Ant Group has been researching in the blockchain field unceasingly, with several platforms built, such as AntChain Blockchain as a Service (BaaS), account receivable management and smart contract management platform, to establish a next-generation trust mechanism while improving the efficiency of value transfer and multilateral collaboration. AntChain is capable of supporting 1 billion transactions for up to 1 billion accounts per day. As for now, the blockchain-related patent applications of Ant Group rank first globally, with 583 patents acquired and over 5,000 applications under review. Blockchain-related independent developed core technologies account for over one-third of the total of 26. 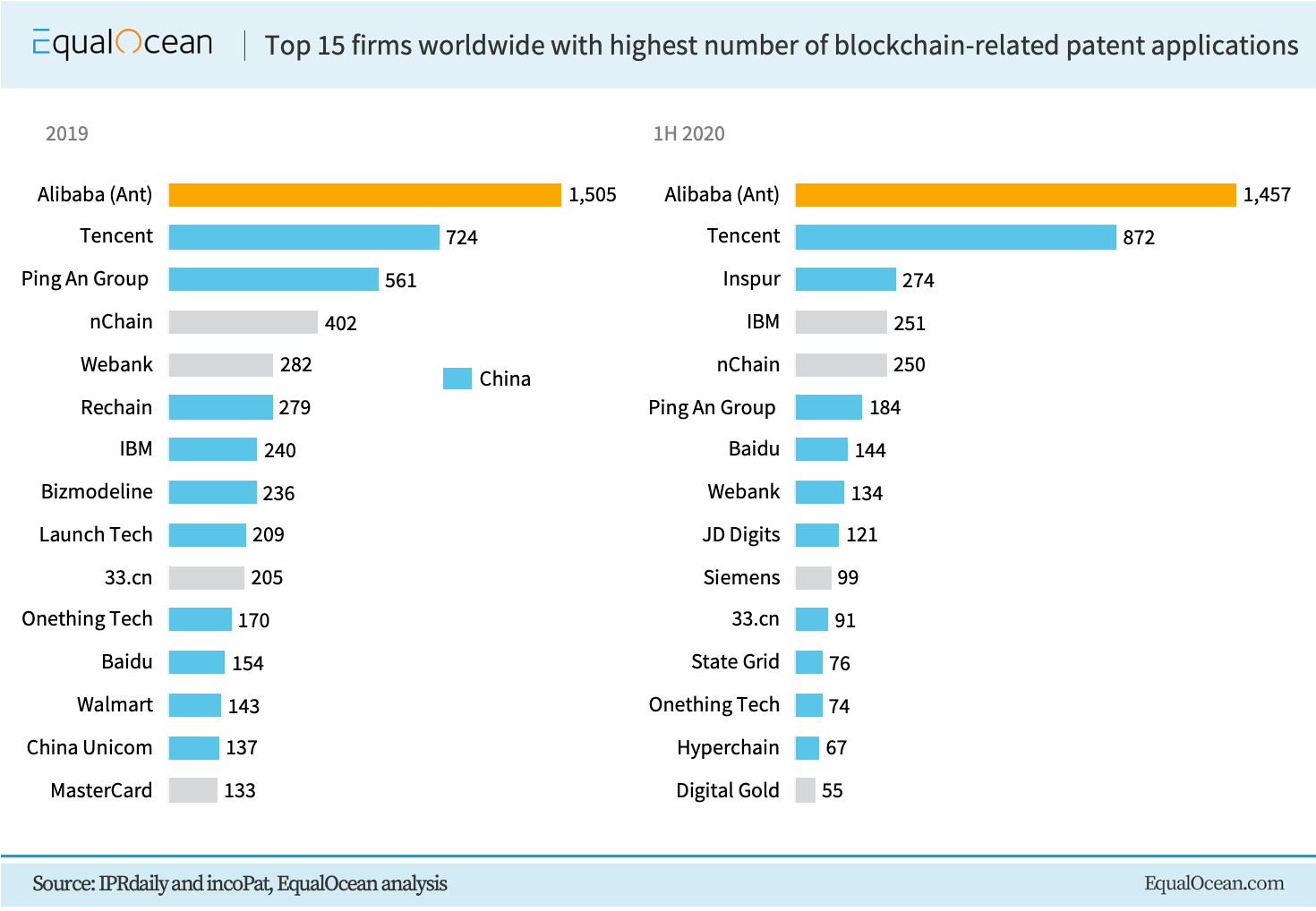 The national-first software and hardware-integrated device of AntChain ensure the privacy and security of the transactions as well as contracts running on the chain, saves over 90% of the deployment time on the blockchain, which therefore pushes the transaction speed up 30% and accelerates the computation five to ten times.

Trusple (refers to 'trust made simple'), a blockchain-based platform for cross-border operations developed by Ant Group, which was officially launched at the Inclusion Fintech Conference in Shanghai on September 25, 2020, is expected to reform international trade. The platform digitalizes the identities of buyers and sellers as well as transaction information such as the products, amounts, and the logistic situation. Both sides are trading based on the smart contracts and the security and certainty are ensured through the blockchain. By the inclusion conference was held, BNP Paribas, Citi Bank, Deutsche Bank, DBS Bank and Standard Chartered Bank have become partners of Trusple.

Currently, this area only takes up 1% of the entire business of the company. While the advancement in the blockchain is likely to drive Ant Group in the long-run as the demand for securer and faster financial environments grows fast.

AlphaRisk, the intelligent risk management engine that Ant developed independently is considered to be one of the most advanced risk control systems globally. Protected by AlphaRisk, Alipay can analyze the fraud and provide corresponding solutions automatically and keep the fraud loss rate less than 0.000064‰, which is significantly lower than the average level of 2‰ of the global third-party payment providers and ranked first among all of the players. Especially when compared with its main competitors, WeChat Pay and PayPal, Alipay beat their levels of 0.0001‰ and 1.5‰ respectively in 2019. 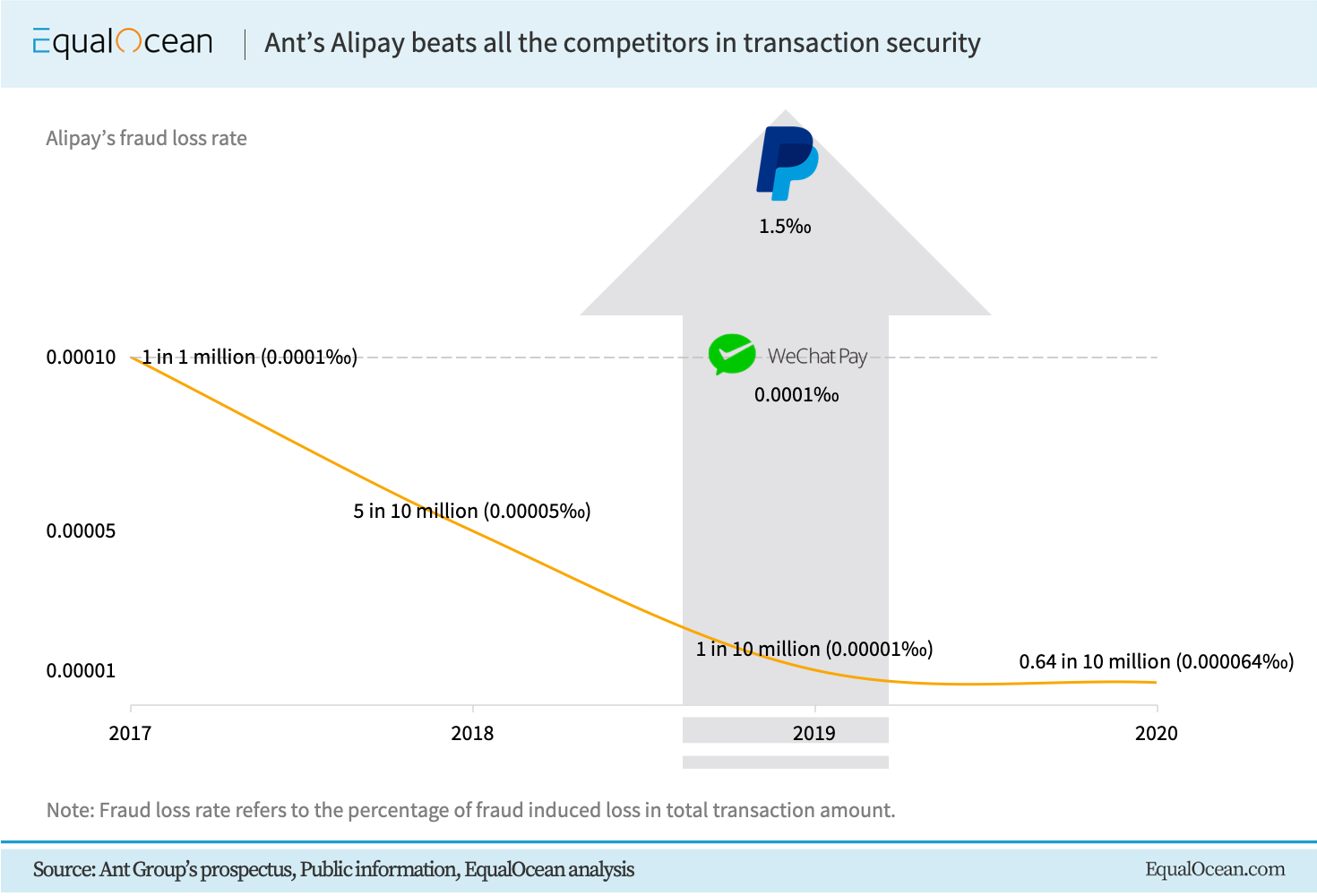 What is more, Ant Group has initiated a variety of international standards in AI and security domains, which set the barriers and the benchmarks for companies to enter the global market.

In the wealth management field, AI drives the company to provide more precise investment advice to clients. BangNiTou (invest for you, Chinese: 帮你投), the new intelligent financial advisor product that launched in early 2020 on Alipay can actively manage the money for clients, analysis their investment behaviors and provide customized services. Vanguard, the largest smart financial advisor company globally, teamed up with Ant Group in the intelligent advisor development, and even closed all other businesses in the rest of Asia based on the trust and recognition of Ant.

In other fields, AI is empowering the intelligent transformation for financial services. For example, a smarter contract and transaction management systems are provided for merchants to simplify their operations; face recognition function started to commercialize offline mobile payments; robots are used to replace manual power to process a large amount of insurance claiming materials precisely; MYbank's contactless credit lending process saved the manual costs and achieved extremely high efficiency with 3 minutes for application, 1 minute for issuing the loan. As a reflection, the number of client representatives only experienced a slow growth with the users of Alipay who has been surging from 450 million in 2016 to 1.2 billion now, with tons of new products debuting on the platform. During the one-year-period in 2015, the usage rate of smart robot representatives ran up from 60% to 94%.

Computing: Speeding up and stabilizing transactions

In 2015, Ant Group started to provide cloud computing services to FIs, which reduces the systematical cost of every transaction dozens of times.

OceanBase, the independently developed distributed database, broke into a new high-level of transaction processing speed for the world. In the TPC-C test, the benchmark for database capacity on online transaction processing (OLTP) that made by TPC (Transaction Processing Performance Council) in 2020, Ant Group's OceanBase, once again, broke the world record of 707 million transactions per minute, which is over 11 times higher than the figure it reached in 2019 – 61 million. In that year, the company first broke up the Oracle's nine-year-long monopoly. Not only equipped with the high data processing ability, but it also made the hardware costs 10 times lower than the traditional centralized database without sacrificing on performance. 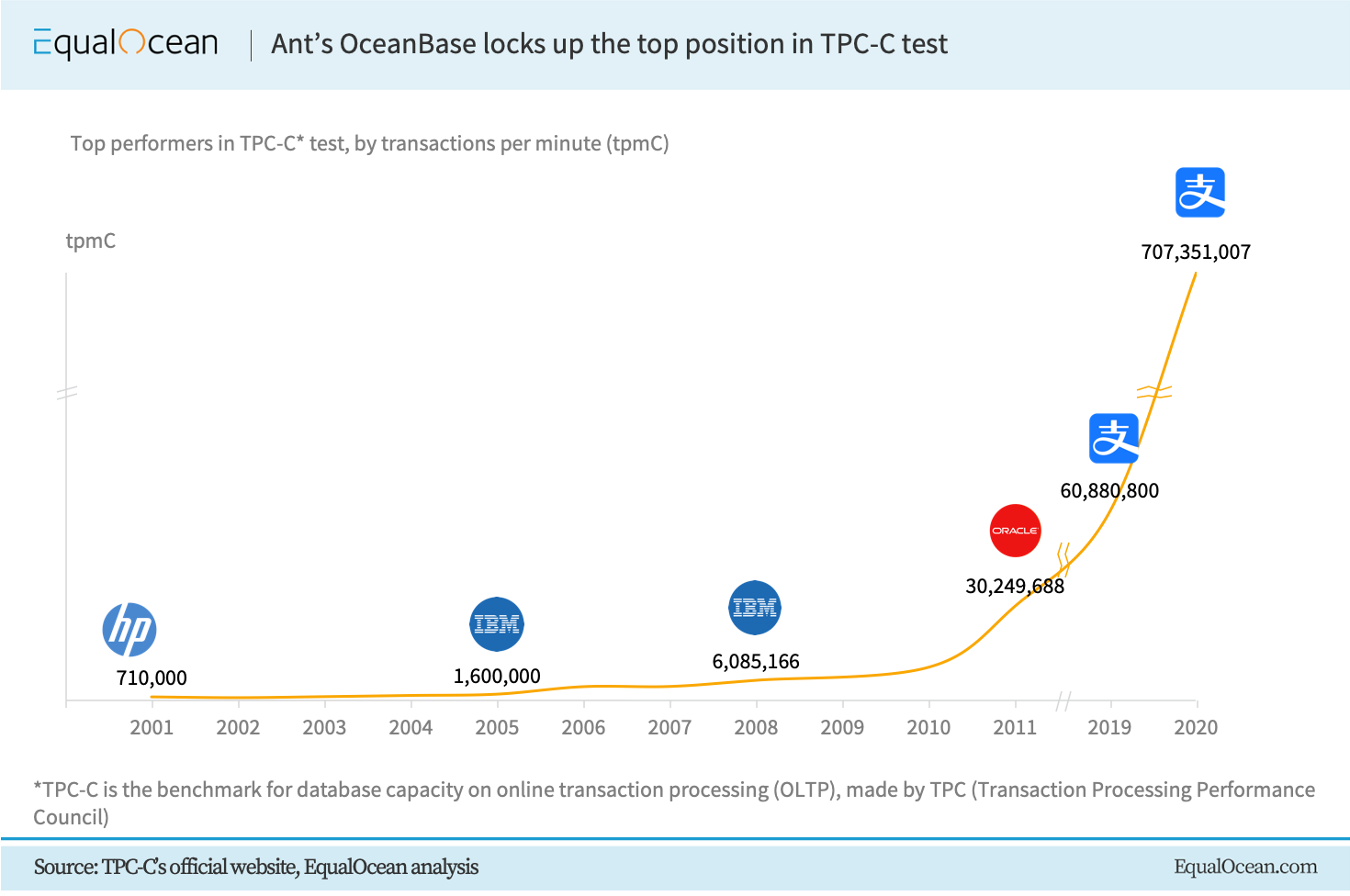 The technological capacity can be proved by the 'single-day' shopping festival every year. The packages flow during the festival in 2019 reached 1.3 billion a day with the order amount reaching the highest level of 544,000 deals per second, which is 1,360 times of the figure in 2009 when the 'single-day' just launched. Even under such tremendous traffic, the website worked without a break. 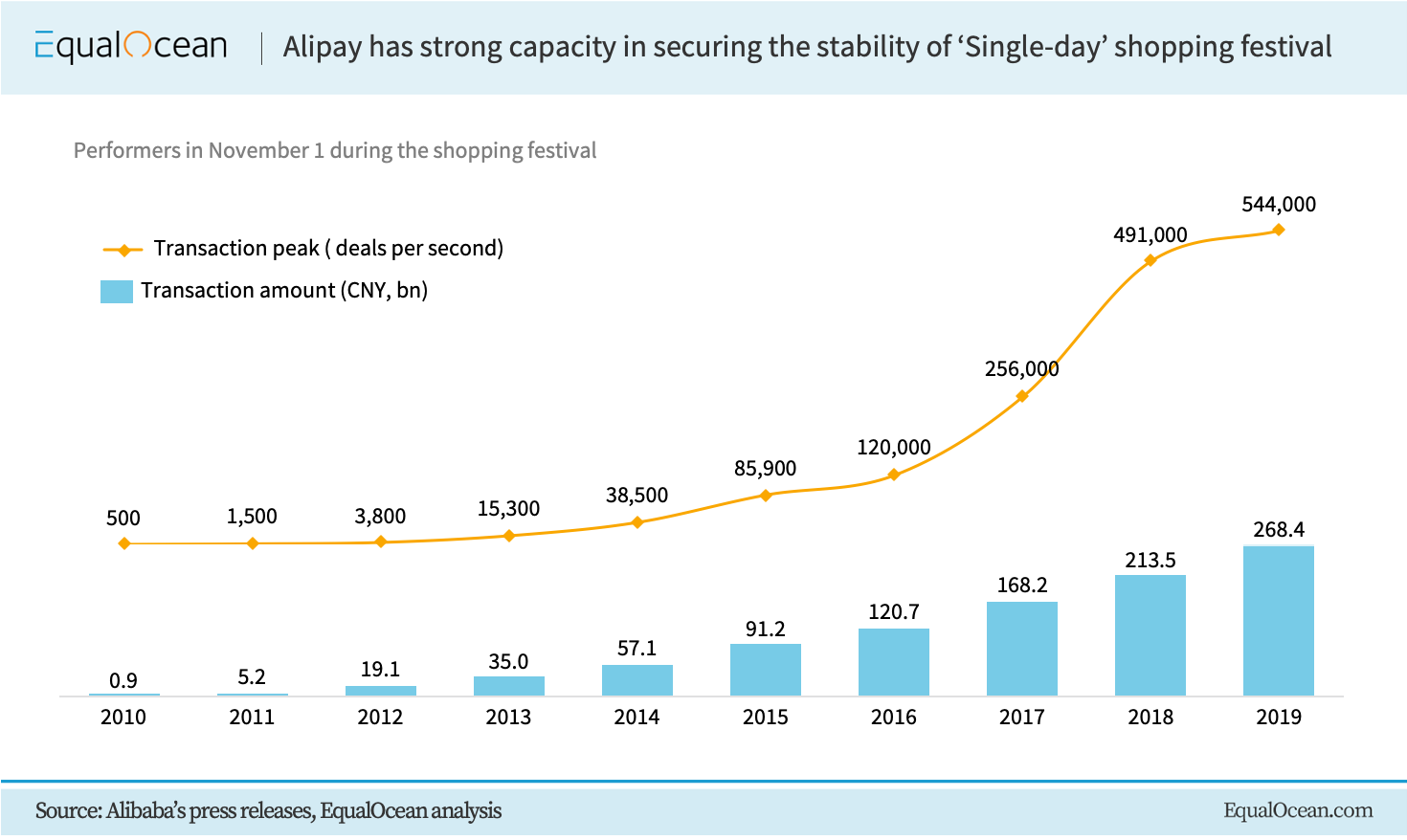 This is the first part of this series of articles, in the next part we will continue to discuss Ant Group's developing drivers.