Although it makes up part of an oligopoly in the world of automobile glass, Fuyao’s future is still dependent on the recovery of the auto industry. 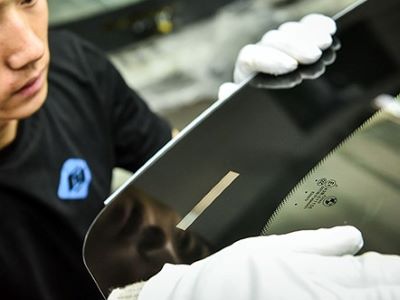 ► With a monopoly in the Chinese automobile market, Fuyao is also a leading player in the world market.

► Strong manufacturing is backed up by improving technology and added value.

► Fuyao benefits from the fast-recovering downstream auto market in China, but its direct exposure to the EU and the US market may cause significant headwinds.

Fuyao Glass Industry Group Co., Ltd. (Fuyao) is the leading automobile glass manufacturer in China. Its product matrix includes door glass, sunroof encapsulation, windshields, and rear windows, etc. The sales per car average at about USD 100 – 140 now, which is expected to further rise due to the increasing usage of glass in future intelligent vehicles. 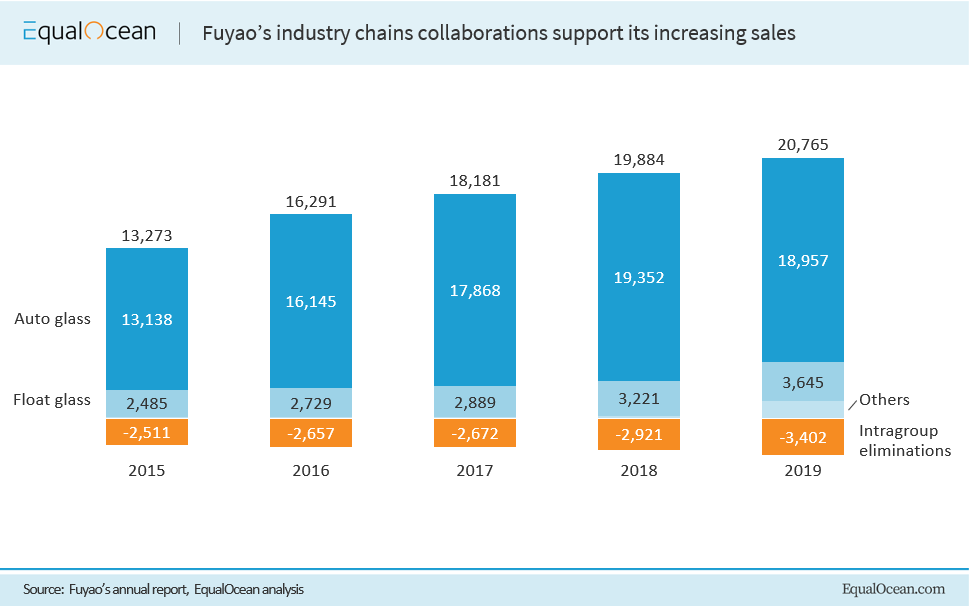 For the last 30 years, the growing global automobile market has ensured the stable development of Fuyao. Its sales revenue has increased since its listing on the Shanghai Stock Exchange (SSE) in 1993. The recession of the automobile market since the mid of 2019 has led to Fuyao's lackluster performance this year. Its net income suffered a dramatic drop of 34.9% in 2019. 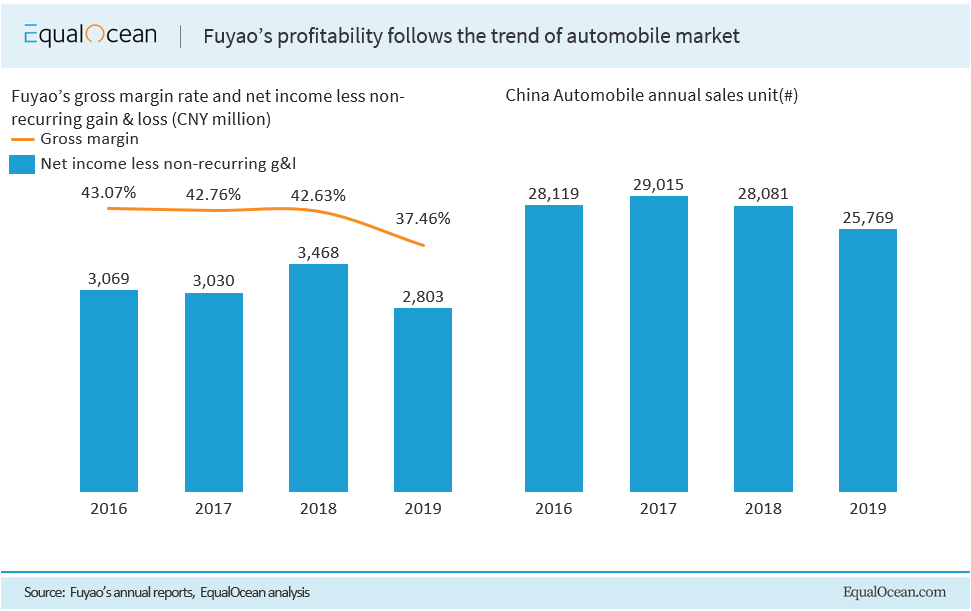 According to Fuyao's 2019 annual report, eliminating the gain and loss caused by incomparable factors such as equity selling and lawsuit compensation, the company still suffered a 7.45% net loss. As a company purely focusing on automobile glass products, Fuyao's sales performance is driven by the changing of the auto market. So Fuyao's sales in the near future is expected to be affected by the post COVID-19 recession worldwide. In the long run, Fuyao's outstanding sales growth in the 2010s is very likely to slow down.

Market position from China to overseas

Fuyao is a pure automobile glass provider and a monopoly holder in the Chinese market. Its market share has exceeded 60%. As a comparison, the second largest player, Asahi Glass, takes only 12% of the market. 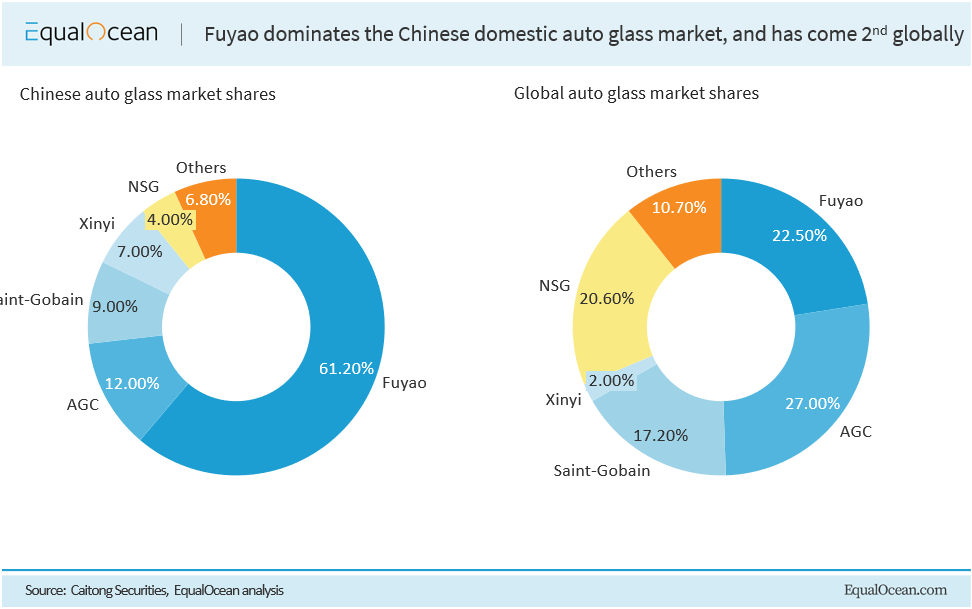 Due to the difficulty of glass product transportation, localization is inevitable for Fuyao’s global development. Fuyao started its global sales in Hong Kong and the US in 1994. Until 2008, it has established subsidiaries for sales and customer services in the US, Germany, Japan, and Korea. Since 2011, Fuyao has built glass factories in countries including the US, Russia, Japan, Germany, etc.

As depicted in the recent documentary American Factory, Fuyao's oversea factories can improve the employment rate in the local markets. So, its development in most countries won support from local government and has thus proven relatively successful. The accelerating manufacturing globalization also released Fuyao from the increasingly competitive Chinese domestic manufacturing industry. As the labor force becoming more expensive in China, the advantages of lower costs of the Chinese manufacturing industry are weakened in recent years. High tax rate and land price make domestic manufacturing even less profitable. Fuyao is a typical manufacturer that made effort to expand oversea to maintain the margin rate.

However, Fuyao’s global expansion also adds the correlation between its performance and the global automobile market. When the Chinese automobile market is expected to further recover in 2020 Q4, the global market is far from getting rid of the COVID-19 pandemic. As the recovery of the America and Europe market still unclear, Fuyao’s performance is not very likely to revert to an upgoing trend in 2020. Shown by EqualOcean’s prediction model (details in the valuation sector), Fuyao is not expected to have a sales growth above 10% after 2021.

There are ‘Fuyaos' in other Chinese auto parts subsectors

The Chinese automobile parts market is segmented and diversified, as it is reacting to changing industry trends rapidly. Apart from Fuyao, many sub-industry leaders also share similarities with respect to development paths and capital market moves. Joyson Electronic (600699:SH) (electronic and safety products manufacturer), HASCO Automotive (600741:SH) (leader of the Chinese automobile interior and exterior market), and Xingyu Car Light (601799 SH) (comprehensive car light manufacturer) all began as traditional automobile parts providers, and have made massive global acquisitions since around 2010.  By making consistent big moves in the capital market, Chinese manufacturers have not only expanded their product types to became more comprehensive providers, but integrated modern technologies to upgrade their products. Advanced products ensure continuous orders from international and global autonomous manufacturers. Thus the leading tier-1 players are able to maintain their market position.

We expect Fuyao to consolidate its leading position in China's glass market given the stable market-share outlook. We expect it to generate CNY 19.3 billion revenue given headwinds caused by covid-19 but it will move along to CNY 27.8 billion sales in 2023E. Currently, the investors have priced in Fuyao's earnings as they expected a fast-downstream auto demand recovery. We expect higher glass content per car and Fuyao's leading market position to drive its topline growth from 2021E, with the gross margin to gain due to the economies of scale and decreasing material costs. Management operating leverage will improve bottom-line growth, in our view. Our DCF-based price target is CNY 26.4, assuming a WACC of 7.2%, a perpetual growth of 2%. Initiate with Hold. 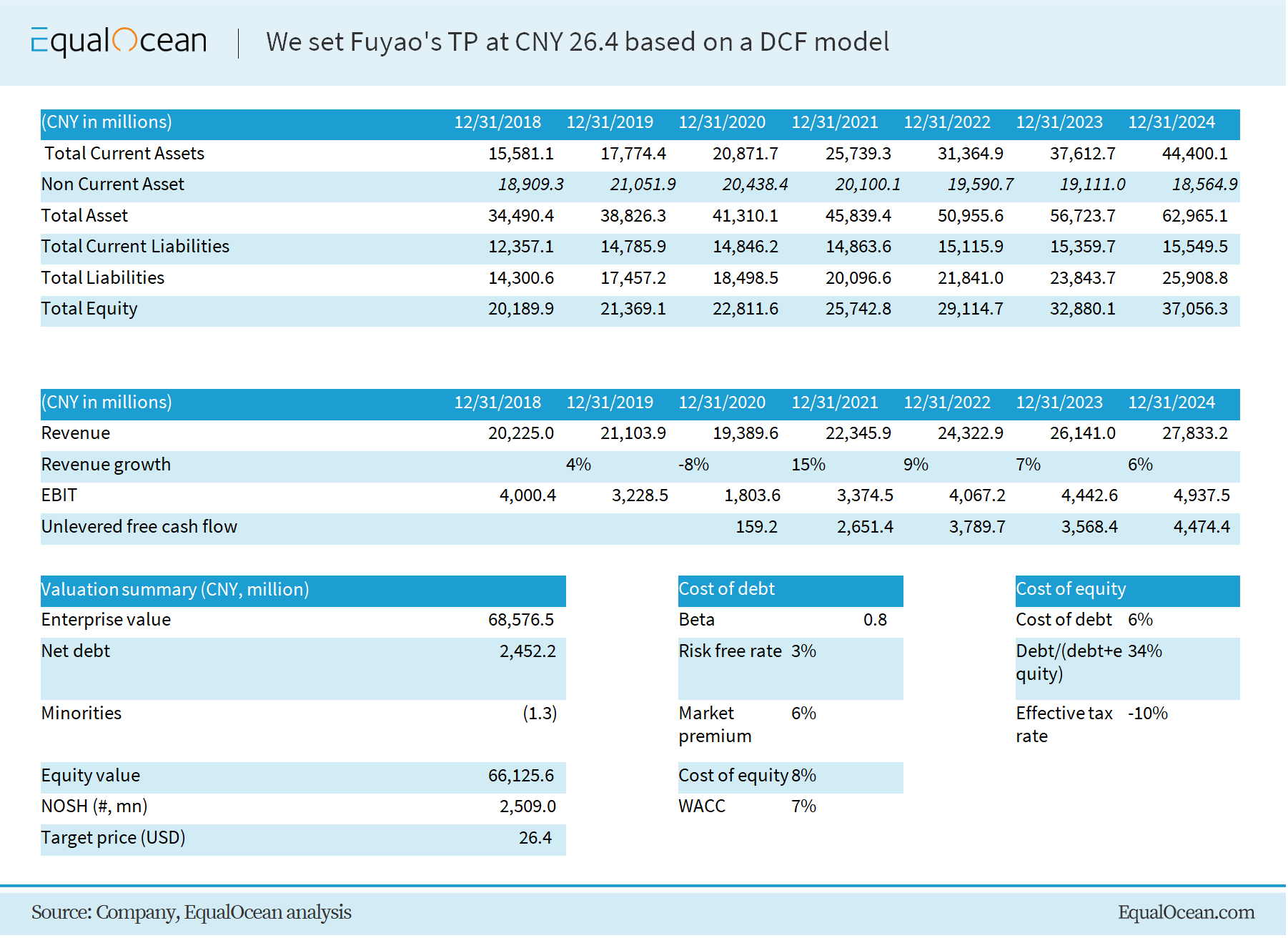