The first edition of EqualOcean's monthly overview of the Chinese car maker. 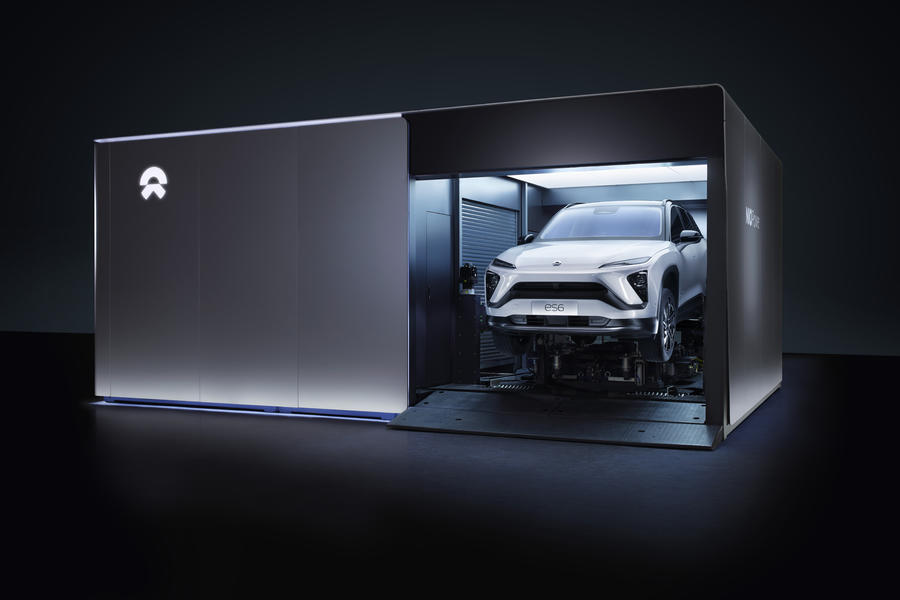 Although it has recently been shorted by Citron Research, NIO's stock is performing well, mainly due to the car maker's strong 3Q 2020 earnings and the improved investor sentiment. But there are many questions about its swelling market cap. Meanwhile, the competition is getting tougher as its biggest rival – Tesla – is on the verge of producing thousands of Model Y's in China at reduced prices.

Regardless of the downturn caused by the COVID-19 pandemic, major Chinese electric vehicle (EV) upstarts have been showing stellar performances this year. EqualOcean believes that these companies are likely to lead the next automotive revolution and play a larger role in the global high-end EV space. Below, we analyze NIO, China's top EV maker, through five key dimensions: EV market penetration in China, sales and competition, financial projections, key infrastructure installation and technical risks, rewinding the startup's critical developments and rating the stock. 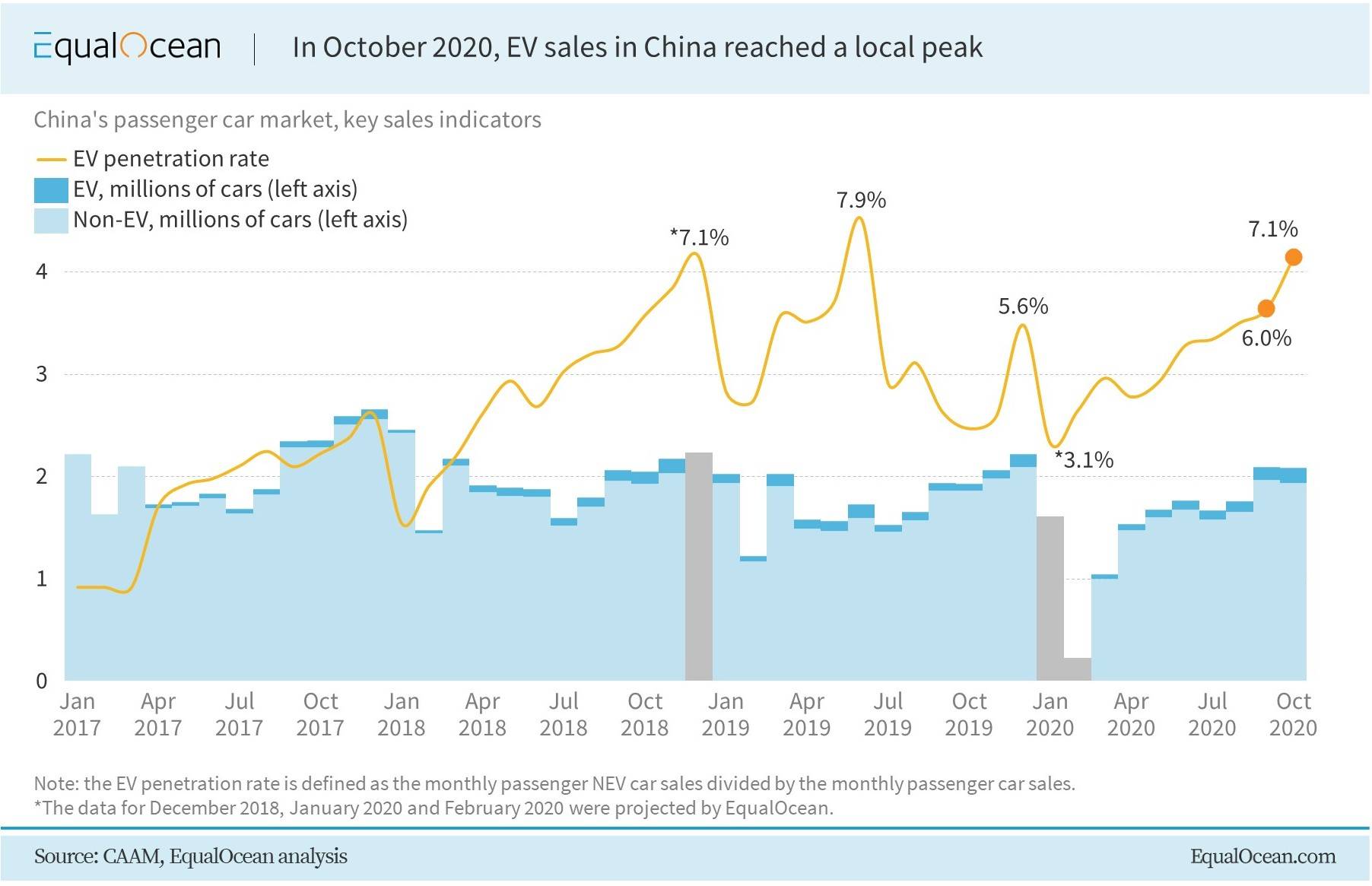 In October 2020, China's passenger car sales were down by 0.19% month-on-month (MoM) but up 8.09% year-on-year (YoY). The YoY results show that the market has bounced back since April, turning positive for the first time this year. We noticed that the MoM growth rate was down from 8.13% of last month's figure.

We see the penetration rate increased to 7.1%, up an absolute 1.1% MoM, 3.7% YoY. We attribute the MoM change as consumers are accelerating to accept NEV, consistent with NIO, XPEV and LI's raised sales figure. The last year's subsidy retreatment intensified the YoY change. 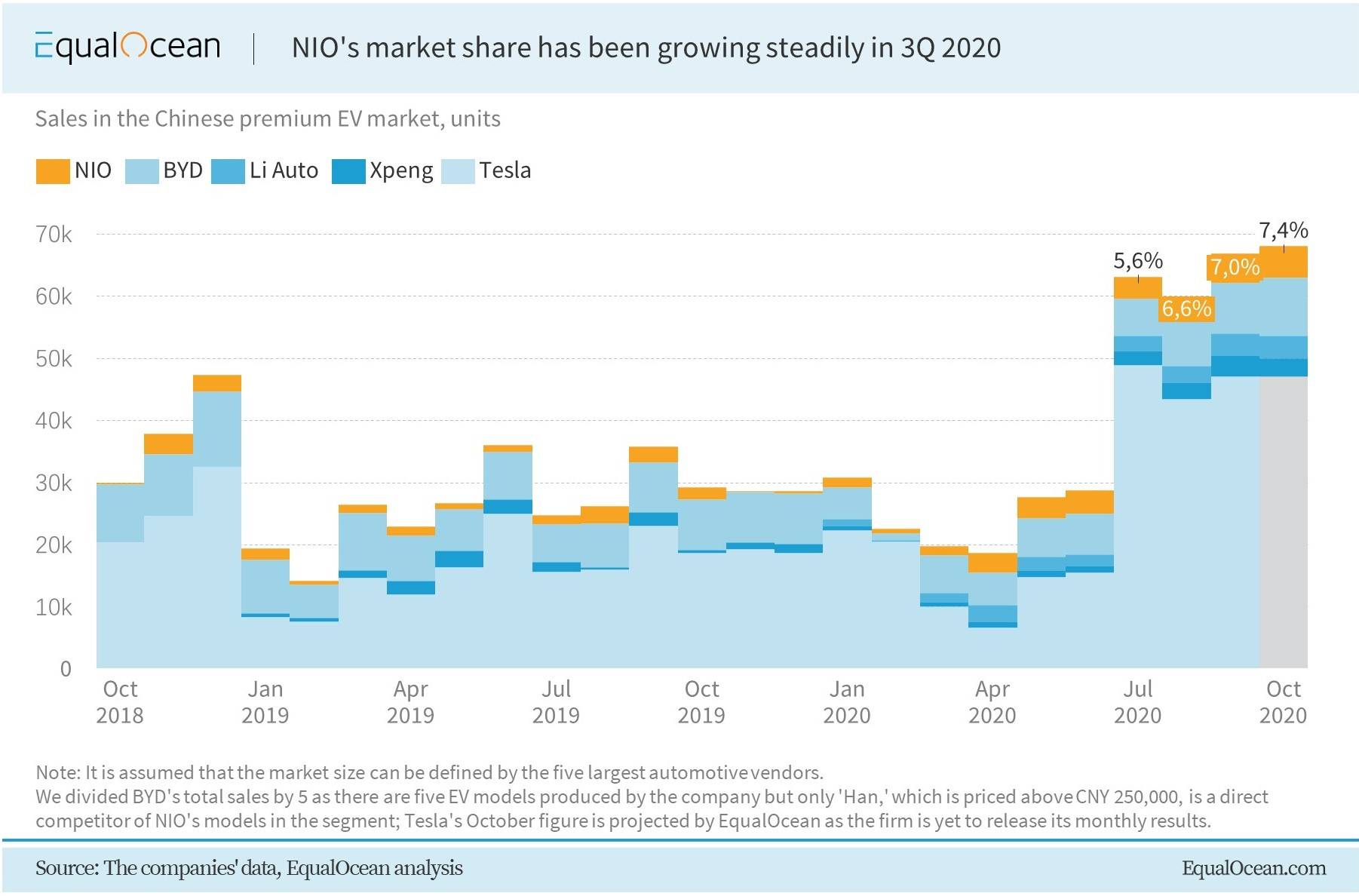 The October sales figure showed NIO is gaining market share. It nabbed 7.4% of market cake from 7.0% a month ago and 6.9% a year ago. We believe this is due to its better competition power from a lager production and more diversified models with decent power of products. As China's electric fleet is expected to reach 162 million vehicles by 2040, the charging infrastructure boom seems quite logical.

Other than that, the State Grid Corporation of China has invited 51 charging companies from across the country to join its platform to accelerate the interconnection of charging facilities and promote EV charging services' sustainable development. 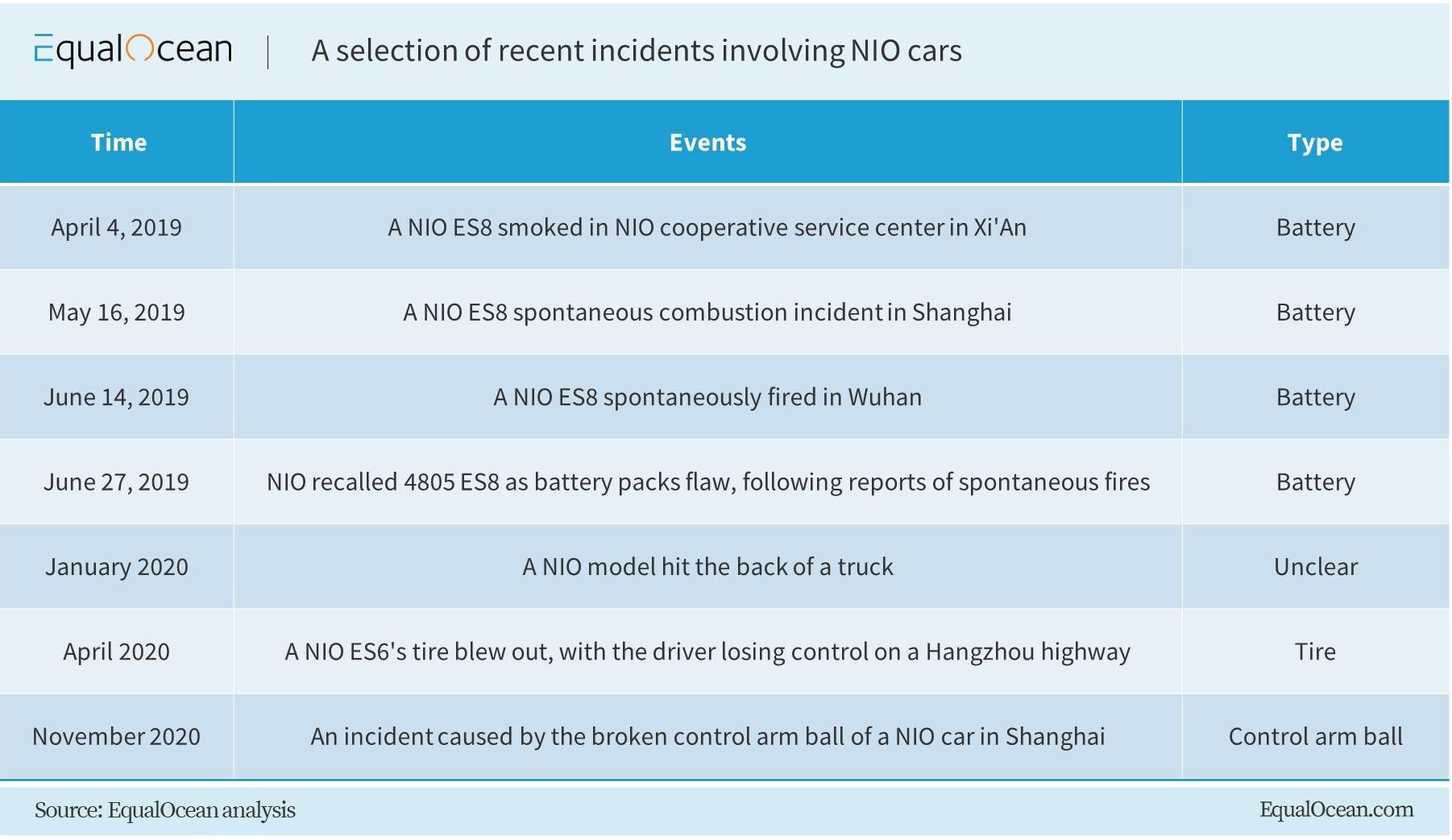 Although the number of incidents so far is not very high, this does show that NIO will have to focus on the quality of their cars, trying to fix one of the largest pain points of EVs: the battery fires.

Below we have listed three news between October 15 and November 15 that we consider are essential for the NIO and may have affected the company's market performance.

NIO also published a new trump card upgrade plan: current 70 kWh car owners can choose to upgrade once or through an affordable approach of paying CNY 880 per month.

NIO models with the 100 kWh battery will be available for pre-order starting November 7, 2020.

Besides, NIO's CEO William Li revealed the company is working on a 150 kWh battery.

According to the Shanghai public security bureau, since November 2, 2020,15 backbone road's traffic control time was extended to 7 am to 8 pm on weekdays. Starting from May 2020, the restricted roads will be extended to more streets inside the Inner Ring Road.

According to CMSC, 31% of Shanghai's 5.4 million cars are licensed outside the city, which means that there are about 1.67 million cars in stock. They estimated the potential needs replacing for NEVs come from the 1.67 million vehicles and the increment of more than 100000 vehicles a year. The requirement will spur the replacement forward.

NIO is currently priced at similar valuation multiples to TSLA. According to some analysts, the stock can be traded at the current price only if it showed good profitability and perfect execution. But so far, all of these have not been demonstrated.

We think that Citron's action is not entirely worrying news for the company. On the contrary, this is good news for long-term investors. Firstly, unlike some other Chinese companies, NIO has never been accused of fraud like sales fabrication (which is barely possible in the auto space). Secondly, Citron stated that NIO's stock price should be around USD 25 apiece, around six times higher than at the beginning of 2020 (USD 4), which also supports NIO's decent business performance.

Moreover, NIO may need to focus on Tesla's Model Y pricing strategies to trigger fiercer competition. On the one hand, this shows that Tesla will face more pressure in China, with less obsession among Chinese consumers that may shift to the likes of BYD, NIO and Xpeng. On the other hand, NIO builds its competitive advantages by offering a high-end luxurious interior. With the rising sales, it is apparent that consumers not only in China but even abroad are putting more faith in Chinese vehicles. The rivalry is warming up. However, William Li, NIO's CEO, still believes that traditional combustion engine cars are the main competitors of the company.

We give NIO a 'hold' rating due to its relatively high current valuation. More Chinese consumers are accepting NIO's cars, with the entire market showing resilience in the year-end (usually, the peak period for car sales). The factors will help NIO boost deliveries in the following months.