In this article, we compare the two 5G alliances of China and forecast the outcomes of their cooperations. 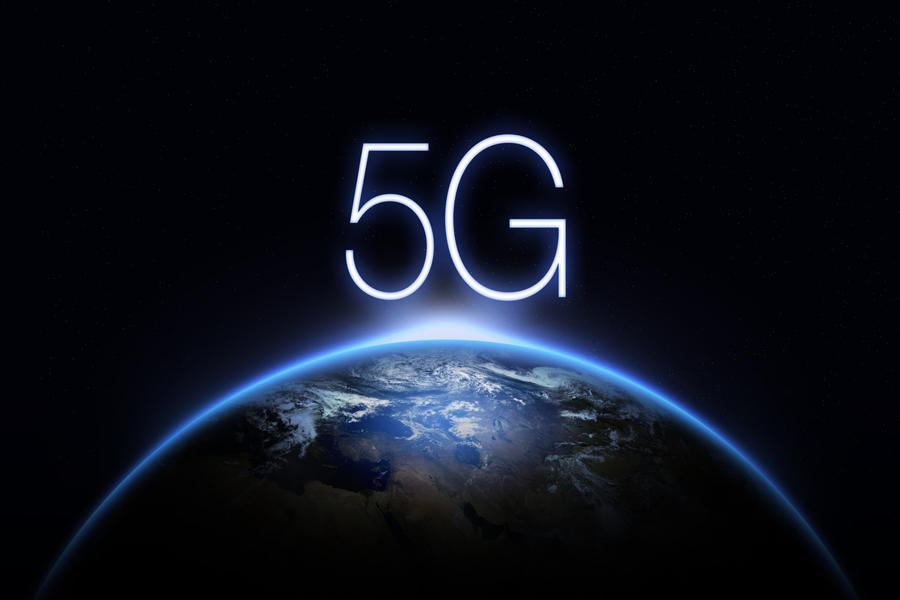 On January 26, 2021, China Mobile (00941:HK) signed a 5G co-construction agreement with the China Broadcast Network (CBN). According to the document, China Mobile plans to share 5G capacity with CBN for eleven years from 2021 to 2031. The two large operators will jointly build and share a national 5G network using CBN's 700 Megahertz (MHz) spectrum, with equal spending on construction. Notably, China Mobile will provide network operations and management on a commercial basis and share its existing 2.6GHz band with CBN, underscoring a bullish outlook for investors in China Mobile and CBN. The cooperation between China Mobile and CBN forms a 2V2 competition pattern in China's 5G sectors.

Up to now, China Mobile and CBN have built over 38.5 million 5G-base stations in China, covering 56 cities and attracting over 165 million 5G users. China Mobile has become the number-one communications operator with the widest 5G network coverage and the most 5G customers in the world. At the same time, by December 2020, the existing alliance for the two other large operators, China Unicom (600050:SH, 00762:HK) and China Telecom (00728:HK) had built 33 million 5G-base stations altogether, covering 50 cities and fiercely competing with China Mobile and CBN. The cooperation seems to have the look of a win-win situation for both parties. On the one hand, China Mobile is licensed to use the 700MHz band that is essential for supplementing 5G-base devices. This accessible option also expanded the company’s productions on an all-brand structure encompassing high-frequency 4.9GHz, intermediate frequency 2.6GHz, and low-frequency 700MHz. Therefore, this cooperation widened China Mobile’s future market by accelerating its 5G network development. Similarly, CBN received booming opportunities as the underlying China Mobile.  As a new operator company in China, its mobile communication infrastructure is relatively weak. CBN's main businesses include cable TV and IPTV, which are becoming less and less popular. According to the  2020 first quarterly development report of China's cable TV industry released by Glenn Research, there are only 206 million cable TV users and 190 million digital cable TV users in the 1Q 2020.  Through its cooperation with China Mobile, CBN accesses 2G / 4G / 5G network equipment and infrastructure, enabling quick deployment of 5G network and expanding its consumer base. The 700MHz spectrum for the 5G network build is tantamount to the game-changer of radio and television in this ever-developing digital market.

To summarize, through this cooperation, CBN is interested in building a more mature network and expanding its user base, while China Mobile is interested in obtaining CBN’s 700 MHz 5G band commercial-use license.

Why is the 700MHz band critical?

The 700MHz 5G band is a 5G Nr.FDD (Frequency Division Duplex) band, the widest low-frequency band in the world. Its bandwidth is 45MHz.  The uplink band is 703mhz ~ 748mhz, and the downlink band is 758mhz ~ 803mhz. Moreover, unlike bands from other countries, which are cut up and used by many telecom operators, the 700MHz 5G band was monopolized by CBN for cable TV uses in China before the company received a 5G commercial license. 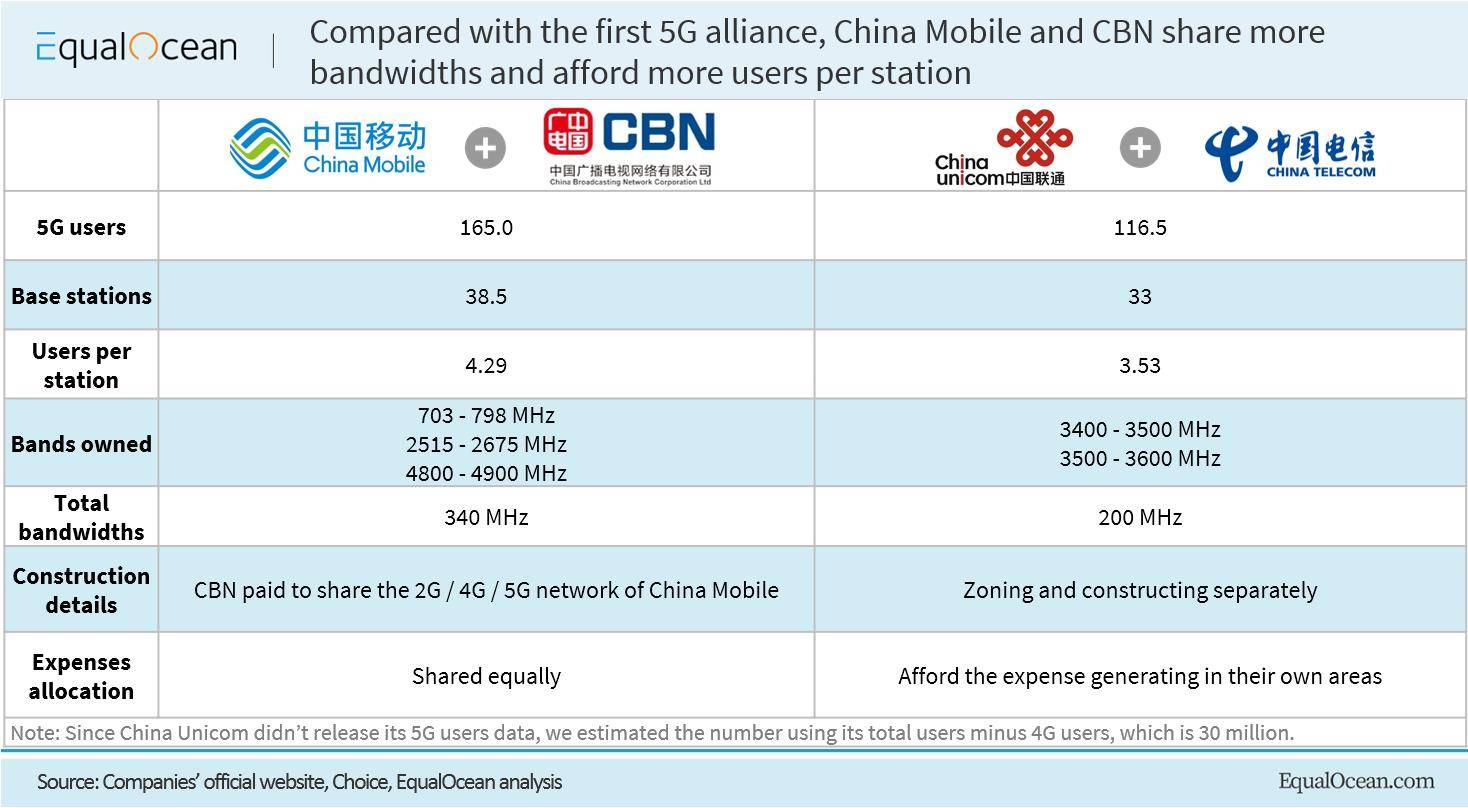 One significant advantage of the 700MHz band is its cost-efficiency. Less spending is beneficial for covering nationwide with a future 5G plan in China during the IoT era. 90% of 5G network investment is in wireless networks, much higher than the investment in core networks. The coverage radius of low-frequency bands (less than 1GHz) is about three times that of high-frequency bands (2.5GHz to 6GHz). In this case, operators can build 80% fewer stations using low-frequency band networking. In more details, only 400,000 base stations require a full-coverage using 700MHz 5G band. On the other hand, more than 6 million base stations are needed when constructing the 5G network on the 3.5GHz band. To achieve a full-coverage of 5G band in China, the total operating expense is estimated to be 30% lower than that of the China Telecom and China Unicom alliance.

The comparison of the two Chinese operator alliances

China's three major telecom players, including China Mobile, China Unicom, and China Telecom, are constantly progressing to more advanced 5G commercial development. China Telecom and China Unicom share a similar approach to 5G frequency bands considering the high cost of 5G construction. In September 2019, China Unicom and China Telecom announced their alliance and subsequently achieved remarkable performance in the first year of cooperation. By the end of 2020, the amount of their 5G users was estimated to be over 100 million in China. However, the low coverage and low-profit margin have always been the pain points for these two companies.

Compared with the alliance of China Unicom and China Telecom, the cooperation between China Mobile and CBN has several advantages. First of all, their current 5G construction strategy shows a multi-frequency combination pattern by using 700MHz as the basic structure, 2.6GHz to enhance network capacity and 4.9GHz as a capacity supplement. Unlike China Unicom and China Telecom's strategy of focusing on 3.5GHz band development, the second alliance plans to focus on attracting more users at first by using the 700MHz band while gradually reducing the proportion of 4G applications to gain a higher profit. The replacement of the 4G by 5G network is a critical turning point for 5G development in China by increasing coverage and profit margin.

However, there is an apparent downside: China Mobile and CBN need to raise social awareness and shift industrial focus to the development of the 700MHz industrial chain. A common dilemma reflected in the immature market is that it has not yet adopted 5G technology into its products. It resulted in the imbalance of demand and supply in the 5G market. A typical example is the CDMA case. The most mature frequency band of 5G in the world is 3.5GHz. Large equipment manufacturers, like Apple, Samsung and Huawei, have been developing 5G network construction and services on 3.5GHz frequency bands. Nowadays, the 2.6GHz industry chain is gradually becoming mature because of the efforts and the ubiquitous market influence of China Mobile. Along with this trend, smartphones applied to the 2.6GHz 5G network are emerging. However, the industrial chain of the 700MHz band is immature because there are insufficient mobile manufacturers that have access to 700MHz 5G. This will pose major challenges to the alliance between China Mobile and CBN.

Since CBN is not listed in the US or Hong Kong, we only analyze investment chances for China Mobile. We have decided to keep our opinion on China Mobile: it is a good stock in the long-term considering its low PE ratios and high dividend yields. However, we will not recommend investors to long it now, due to the political risk (delisting) and the uncertainty of its 700MHz 5G development. Please check out our other article for more information.