Youdao is likely to find its way of making money in the education service track and product business in the future, with revenue growth points coming from educational smart hardware. 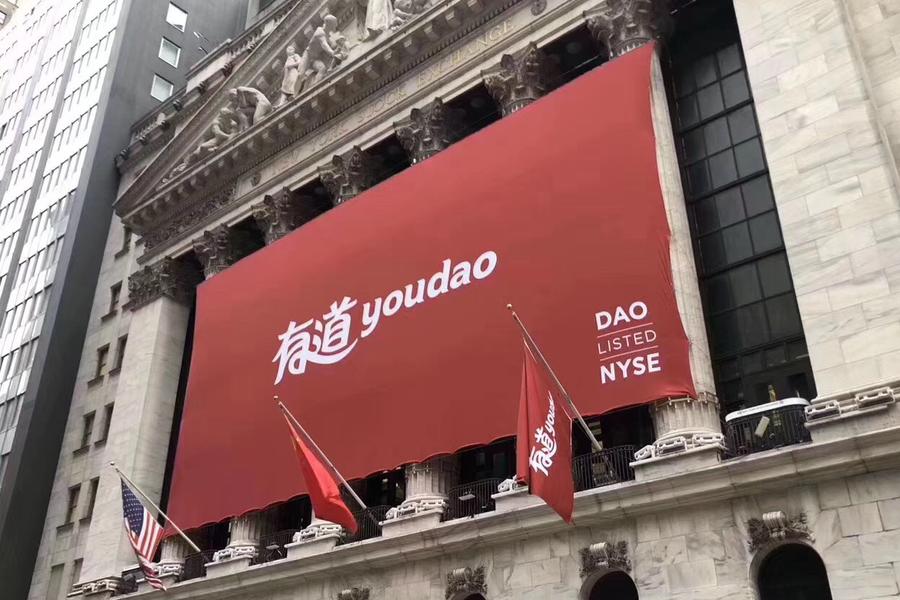 Youdao is a search engine and an online education platform launched by NetEase back in 2006. It is now operating as China's most popular dictionary and translation app with over 700 million users in early 2021. According to 36Kr, the company raised its Series A financing round at a CNY 7.58 billion valuation in April 2018.

Meanwhile, NetEase, the parent company of Youdao, is listed on NASDAQ as one of China's largest Internet companies.

Online knowledge tools: Youdao Dictionary is one of the classic examples as China's top language app in terms of monthly active users in the first half of 2019. Youdao uses these free online tools to promote the company brand and attract traffic to the other business sectors, such as online courses.

Online courses: These courses include Youdao Premium Courses that focus on K12 students. NetEase Cloud Classroom and China University MOOC are two other course formats provided by the company.  This part of the business generates the largest revenue stream for Youdao.

Interactive learning apps enable students to study multidisciplinary subjects, including maths and English, with a virtual teacher. Through social media such as WeChat, users may access these apps and share their results with friends. 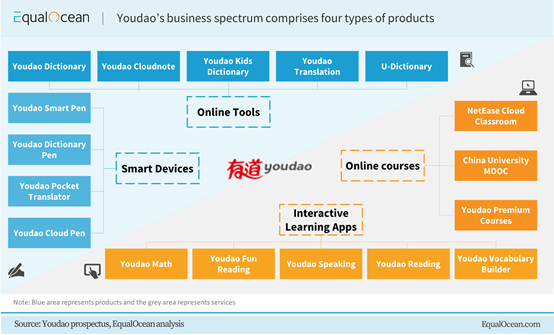 Before 2018, the company's revenue mainly relied on advertising from online market services. Since 2018, with the continuous growth, Youdao's main revenue streams are now divided into three parts, including online course business, educational smart hardware products, learning services and products. Last year, revenue from learning services and products reached CNY 852 million, accounting for 65.28% of total revenue with a year-on-year increase of 98.7%. Online market service revenue was CNY 453 million, accounting for only 34.7% of total revenue. 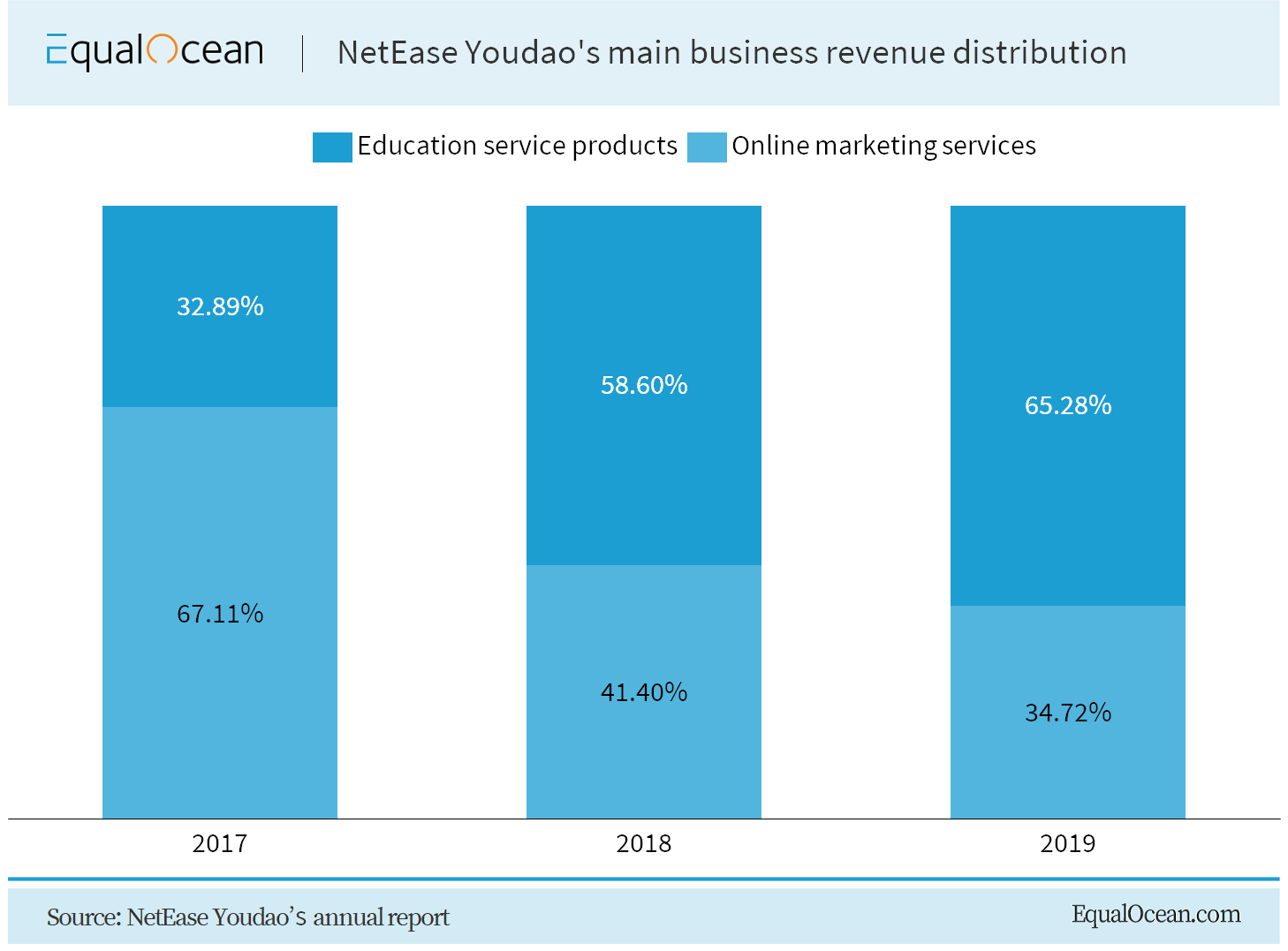 Youdao is likely to find its way of making money in the education service track and product business in the future, with revenue growth points coming from educational smart hardware products and online course business.

Youdao released its first annual financial report since its listing on October 25, 2019. According to disclosed figures, the online education arm of NetEase achieved an annual operating income of CNY 1.305 billion, an increase of 78.28% year-on-year. Gross profit was CNY 370.6 million, an increase of 71.17% year-on-year, the gross profit margin was 28.4%, a decrease from 29.6% during the same period the year before. The net loss increased from CNY 239 million to CNY 647 million. 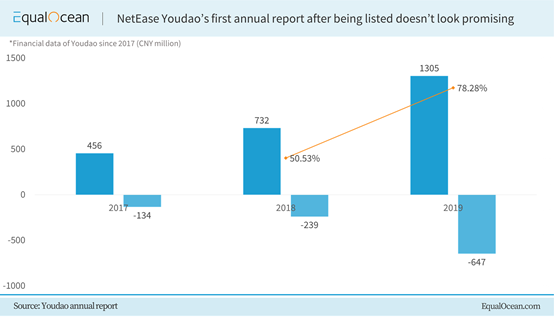 While operating income increased by nearly 80%, NetEase Youdao's net losses are still expanding. The net loss in 2019 exceeded CNY 600 million, with an increase in income and no increase in profit.

The firm's three-fee expenditures increased significantly in 2019, of which the growth in marketing expenses was the most prominent, rising from CNY 213 million in 2018 to CNY 622 million and accounting for 47.7% of the operating income. This significant growth indicated that Youdao had invested nearly half of its annual revenue in marketing in 2019.

In contrast, Youdao's revenue increased, reaching CNY 3.16 billion up 143% year-on-year the following year, even though  the increase in revenue net losses reached a staggering CNY 1.75 billion.

There are two key factors behind it. One is the substantial increase in the number of people paying for regular K12 courses, reaching 659,200 in Q4, an increase of 309.2% year-on-year; the second is the continuous increase in customer unit prices.

K12 has become Youdao's most important business. The continuous expansion of the user base has led to an increase in gross profit margin. The gross profit margin of Q4 learning services increased from 30% in the same period last year to 53.9%.

The corresponding price is fierce marketing. Q4 sales and marketing expenses were CNY 805 million, compared with CNY 206 million in the same period last year, an increase of 290.78% year-on-year.

Multiple factors are aligning with the favorable situation of COVID-19, creating a suitable environment for Youdao to grow its businesses. We will be mentioning some of the driving factors that should help the Chinese online education industry grow in the coming years, setting up a solid platform for Youdao to become successful.

According to data compiled by Statista, the penetration rate of Internet users in China was at a mere 22.6% in 2008 but approximately 70% of the population had access to the Internet by the end of 2020. Over the past decade, the number of Chinese Internet users has grown at a remarkable pace. As of the first quarter of 2020, the total volume of Internet users in the world's most populous country had amounted to approximately 904 million, up from 829 million at the end of 2018. Apart from extended access to broadband internet connections, mobile Internet took up a large share in Internet user growth. The share of users accessing the Internet via mobile device had significantly exceeded that of those via desktop in the country. About 98.6% of Chinese Internet users accessed the web via mobile phone. Developed regions such as North America boast of a penetration rate of close to 90%, and China is well on its way to achieving a similar penetration rate. Online education service providers will reap the rewards of this macroeconomic development in the next few years. 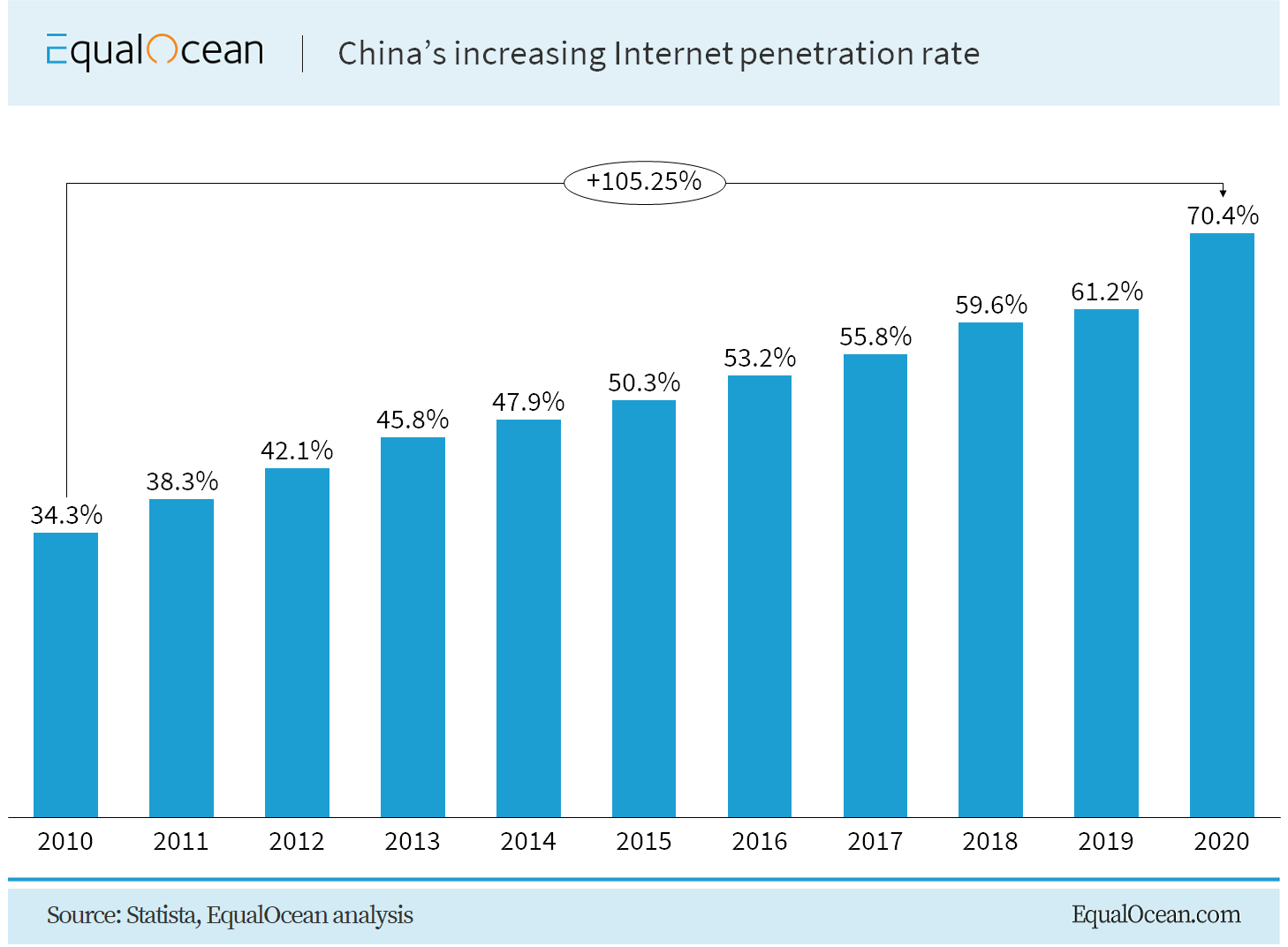 The Chinese government has ramped up spending on education over the last few years as a predicted trend in the near future. Higher spending on education will open up doors for many/ students to embrace online education platforms. Furthermore, during the digital era, the focus is to develop the required IT infrastructure to promote distance learning.

According to Statista in 2020, public spending on education in China reached CNY 3,633.7 billion. Education expenditure increased continuously over recent years, but growth rates are considerably lower than ten years ago.

Since the beginning of the reform era, the Chinese government attached great importance to the development of the educational sector. Besides structural reforms, public spending on education has increased considerably. However, the whole educational sector lagged far behind international standards in terms of quality as well as quantity. Although Compared to the public spending on education of developed countries, China is still in the lower range and did not reach the OECD average of around five percent of the GDP in 2015.

The education industry is known as one of the world's largest industries, making up more than 6% of the world's  GDP. According to market research firm HolonIQ, the total global expenditure from governments, companies and consumers in education is estimated to reach USD 7.3 trillion by 2025.

In addition to online courses for the adult segment and K12, the firm develops education apps and makes smart learning devices such as the Dictionary Pen, its third generation released in December. Its courses are supercharged with innovative features such as interaction, tailored curriculum and exercises, vertical strategy playbook, and even role-playing games.

Although investing in Chinese companies seems attractive, there are risks resulting mainly from regulatory intervention. We do have examples of Chinese companies that have either been delisted or are going through investigations. It is more rational for investors to allocate a small portion of their portfolios to Youdao in the hopes of securing huge returns compared to the buying price.

With huge interest from investors and good financials of Youdao other tech giants, such as Alibaba Group, ByteDance, and Tencent, have stepped foot into the sector over the past year, intensifying competition in certain areas.

Among startups, Zuoyebang and Yuanfudao both backed by strong investors are huge threats. In October, Yuanfudao, which provides K-12 after-school tutoring, as well as pre-school and adult courses, closed its G round of financing Its valuation reached USD 15.5 billion. According to the company's press release, in October, Yuanfudao counted 3.7 million students and was the largest in China.

We believe that NetEase-backed Youdao's focus on quality, innovation, and technology along with decent financials positions it on a remarkable growth trajectory compared to its peers.