The Chinese electronics company has been carrying the public's anticipation of a boom in local semiconductor technology since it announced its production of chips in 2014. The question remains – will it eventually succeed in this field? 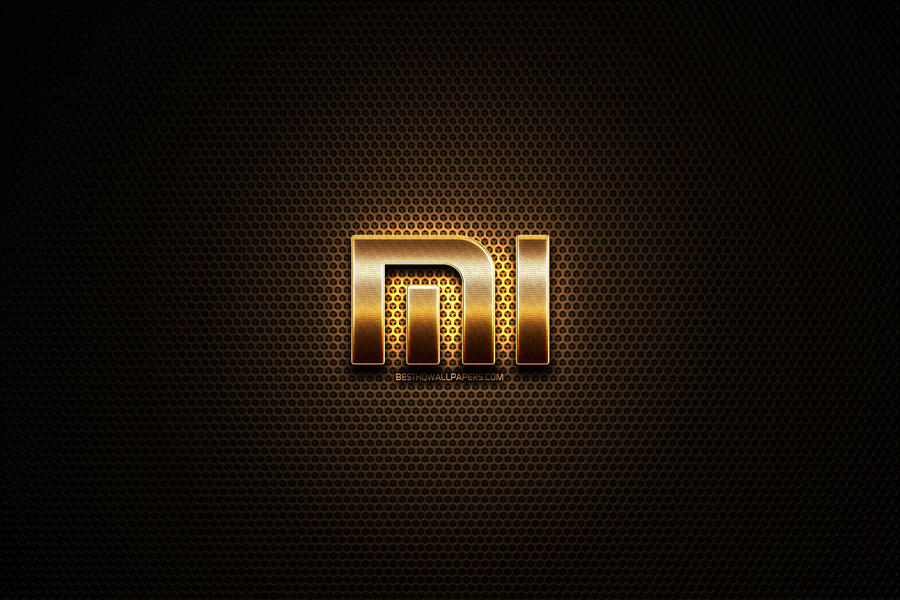 ● Xiaomi's revenues were in an upward trend following on from 2017, whereas the smartphone sector and foreign incomes were its main drivers.

● In a high-stakes market, even though Xiaomi has built chips for over seven years, it still struggles to remain competitive.

● Apart from the industry opportunities, the firm has also made every effort to boost investments and R&D.

● However, the local backward technology processes and threats from the US will remain troublesome issues for Xiaomi on its chip-making journey.

Xiaomi released its new chip – Surge C1 – at its Spring Meeting on March 29, 2021, attracting massive public attention. Moreover, the latest phone, Mix Fold, conforms to the firm's increasing presence in the high-end bands, which in this case is only possible thanks to the Surge C1.

Founded on March 3, 2010, Xiaomi specializes in R&D in intelligent hardware and digital products. Differing from other manufacturers, Xiaomi aims to make quality technology accessible to everyone, so its products are in comparatively low price but relatively high quality. By now, Xiaomi has built the largest IoT platform, connecting over 100 million intelligent devices. Xiaomi's share in the global smartphone market has gradually increased from 2018 and peaked at 13% in the third quarter of 2020.

Read more about Xiaomi Corporation in our newest research report. Smartphones as the main income source

After going public in Hong Kong on June 7, 2018, Xiaomi started opening its international markets and selling products overseas. Specifically, foreign income has gradually aligned with domestic income. Since 2018, the foreign income has risen by 74.86% to CNY 122.4 billion in 2020. More importantly, the smartphone sector was consistently the primary revenue stream, accounting for 64.14% on average of the whole revenue in the last three years. As a result, Xiaomi's income has shown an overall upward trend from 2017. Xiaomi's trip on the chip

Xiaomi's chip business has been apparently underperforming, although Xiaomi got good returns from the smartphone sector. Pinecone Electronics, its first semiconductor spinoff, was founded in 2014 to help Xiaomi conduct its R&D in the space, indicating the beginning of Xiaomi's long-distance run for self-developed chips. In 2017, it released its first-generation chipset Surge S1 and established Xiaomi Yangtze River Industrial Fund. Nevertheless, with the large gap between Xiaomi's products and those of the other players, Surge S1 gradually quit the market. In the following years, the firm did not have news on self-developed chips and weakened the public's confidence. Surprisingly, in the latest meeting in 2021, Xiaomi showed up with its new chip – the Surge C1. Unlike the Surge S1, this chip utilized an image signal processor (ISP), helping it perform more sophisticated and advanced 3A processing. 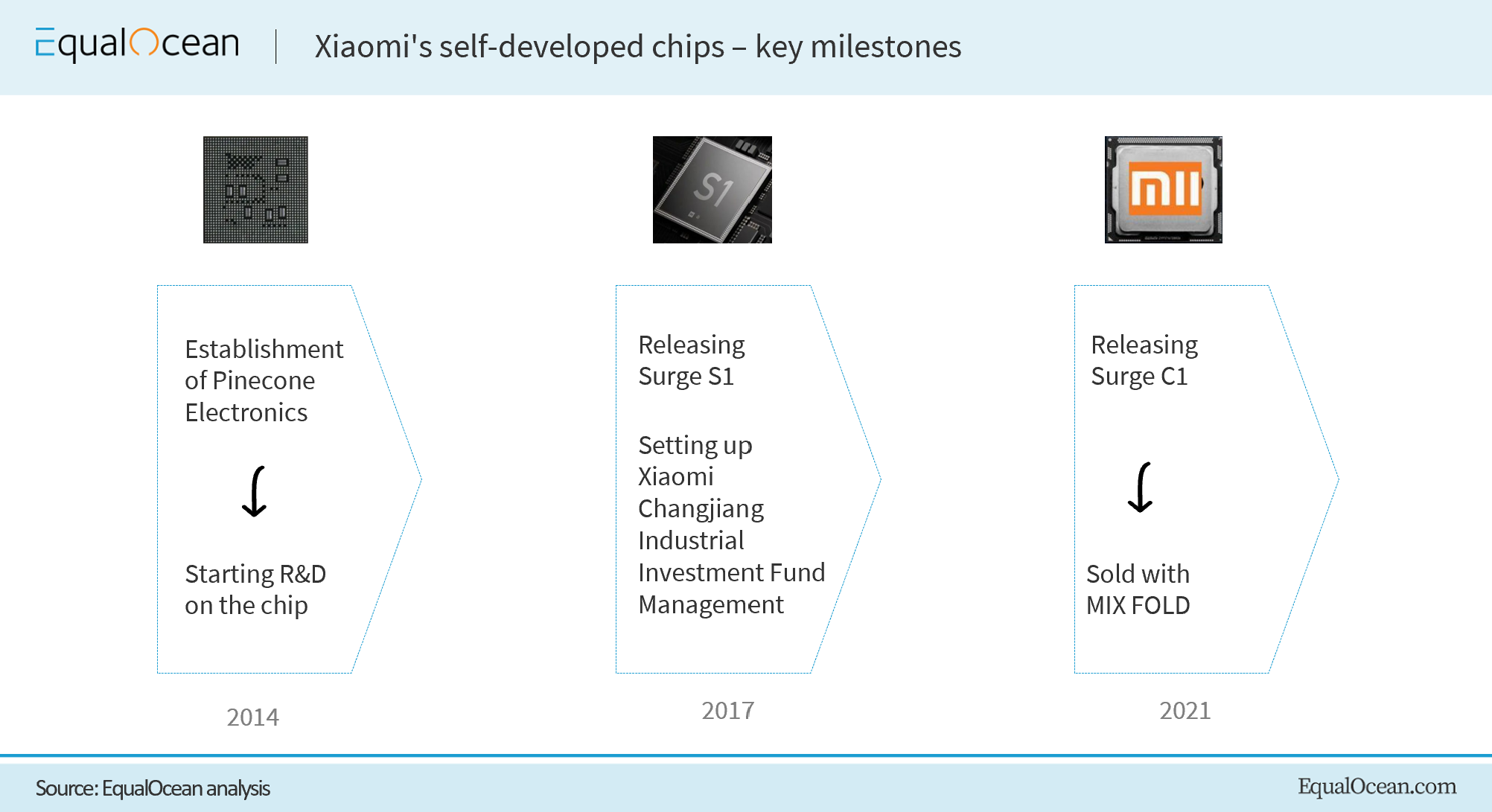 Why does Xiaomi still insist on its R&D in chips? This might be attributed to two main factors which could bring long-term benefits. The first is related to the urgency of domestic replacement for chips. Since 2019, the development of the semiconductor industry has been attracting unprecedented attention from Chinese citizens, especially after Huawei and SMIC were named in the US's 'Entity Lists.' China's semiconductor reliance on other countries pushed more domestic mobile manufacturers to develop chips. Moreover, as the silicon wafer is a foundation for chip-making, the rising market shares of domestic wafer producers will also benefit somewhat non-traditional chipmakers, such as Xiaomi. Currently, global silicon wafer markets are mainly occupied by Japan and South Korea, which combined hold about 60.35%. On the contrary, Shanghai National Silicon Industry Group, the mainland's national champion in the domain, merely accounted for 2.2%, but this suggested there would be plenty of room for China's market share to grow. According to SEMI, there were 26 more fabs being constructed in China from 2017 to 2020. With demand exceeding supply, computer chips' prices will gradually rise. For instance, all 5G smartphones' shipments in different global regions will be expected to grow over 50% in 2021. Greater China has the highest shipment volumes. Resulting from the strong demand, many firms, like Taiwan's Wafer Works Corporation, have raised products' prices since the first quarter of 2021. Even though Xiaomi's self-made chips have been experiencing difficulties, its massive investments in the semiconductor area have helped it to earn profits. By the end of 2020, Xiaomi had invested CNY 48 billion in over 310 firms, which, to date, has helped it get CNY 67.3 billion in investment value. Additionally, Xiaomi has invested in over 35 firms related to the semiconductor industry, prioritizing radio frequency (RF) related startups. The RF front-end market has large growth potential, with its market size projected to reach USD 25.8 billion in 2025.

Secondly, Xiaomi also has R&D advantages. More significantly, when compared with the domestic chip industry, Xiaomi's R&D expenses were much higher than the industry average over the last three years, indicating Xiaomi did take innovation as a priority.

Hurdles on the way

There are three risk factors threatening Xiaomi's future progress. The first issue concerns the firm's historic results: Xiaomi started its chipmaking investments and research in 2014; after over seven years, it has merely released two chips. Also, the mobile phone called Xiaomi Mi 5C loaded with the chip Surge S1 only hit the shelf for seven months and then disappeared. Second, we see a relatively laggard technology development process – Xiaomi entered the semiconductor area much later than Huawei, which has been preparing self-made chips for over ten years. In the semiconductor area, low speed normally results in lackluster chip performance. Last but not least, the investment ban from the US. The US restricted people buying and selling securities related to Xiaomi from January 14, 2021. This might reduce Xiaomi's global effect and profits in the short term.

As the relationship between China and the western world is worsening, more domestic electronics manufacturers are starting to produce essential components themselves.

Xiaomi's track record on building chips was not particularly successful. However, it kept investing in semiconductor firms and improving R&D. In the next few years, we will see whether Surge C1 was a flash in the pan.