In spite of the increasing marketing costs, the Chinese on-demand retail and delivery platform is showing signs of long-term business sustainability. 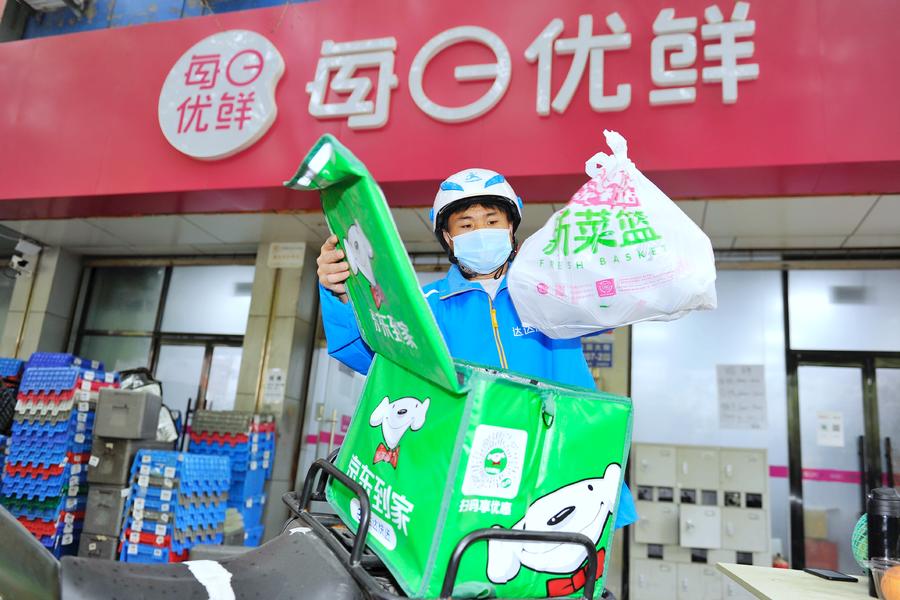 China's Internet industry has lately been growing bigger in the investment realm, with a number of new names making it into the global limelight. Dada Nexus (DADA:NASDAQ), the country's up-and-coming on-demand delivery and retail platform, is one example. On June 8, it released the unaudited Q1 2021 financials, slightly exceeding market expectations, while also passing along ambitious Q2 year-on-year revenue growth rate targets of 72% to 78%, with "more than 80%" for JD Daojia (JDDJ).

Read more about Dada's two main businesses and their performance in our previous quarterly overview.

Right after posting the financials, the company's management announced a new buyback program aimed at repurchasing USD 150 million worth of its New York-listed shares within the following 12 months. Excited investors sent the firm's shares up nearly 14% on the earnings day.

In the March quarter, Dada's revenue reached CNY 1.67 billion, growing by 52.1% year-on-year. Dada Now, its 'open on-demand delivery platform,' generated CNY 894.5 million, reporting an increase of 51.1%. That, per the company, was mainly driven by the booming intra-city delivery services order volume. In comparison, owing mainly to the increase in the number of active consumers (46.1 million for the 12 months ended March 31, 2021, up from 27.6 million a year earlier), JDDJ's revenue rose by 53.3% to CNY 778.3 million; meanwhile, the platform's trailing-twelve-months GMV hit CNY 28.1 billion, growing at a 78.9% rate.

As it normally happens to growth-stage companies, Dada's high double-digit revenue growth rates are accompanied by a great deal of spending. In this quarter, its total expenses surged sharply from 2020's CNY 1.42 billion to CNY 2.43 billion, representing a whopping year-on-year increase of 70.4%. Due to the growing incentives for JDDJ users, increasing advertising expenses and rising personnel costs, Dada's selling and marketing expenses hit CNY 790.7 million, up a staggering 203.5% compared with CNY 260.5 million in the same quarter of 2020. Apart from that, as the company kept strengthening its technological capabilities, the research and development cost increased to CNY 124.2 million, with a 42.9% growth. In the meantime, the operational efficiency was seemingly improved, as the 'operations and support' cost grew by 44.45%, a rate lower than that of Dada's total revenue. 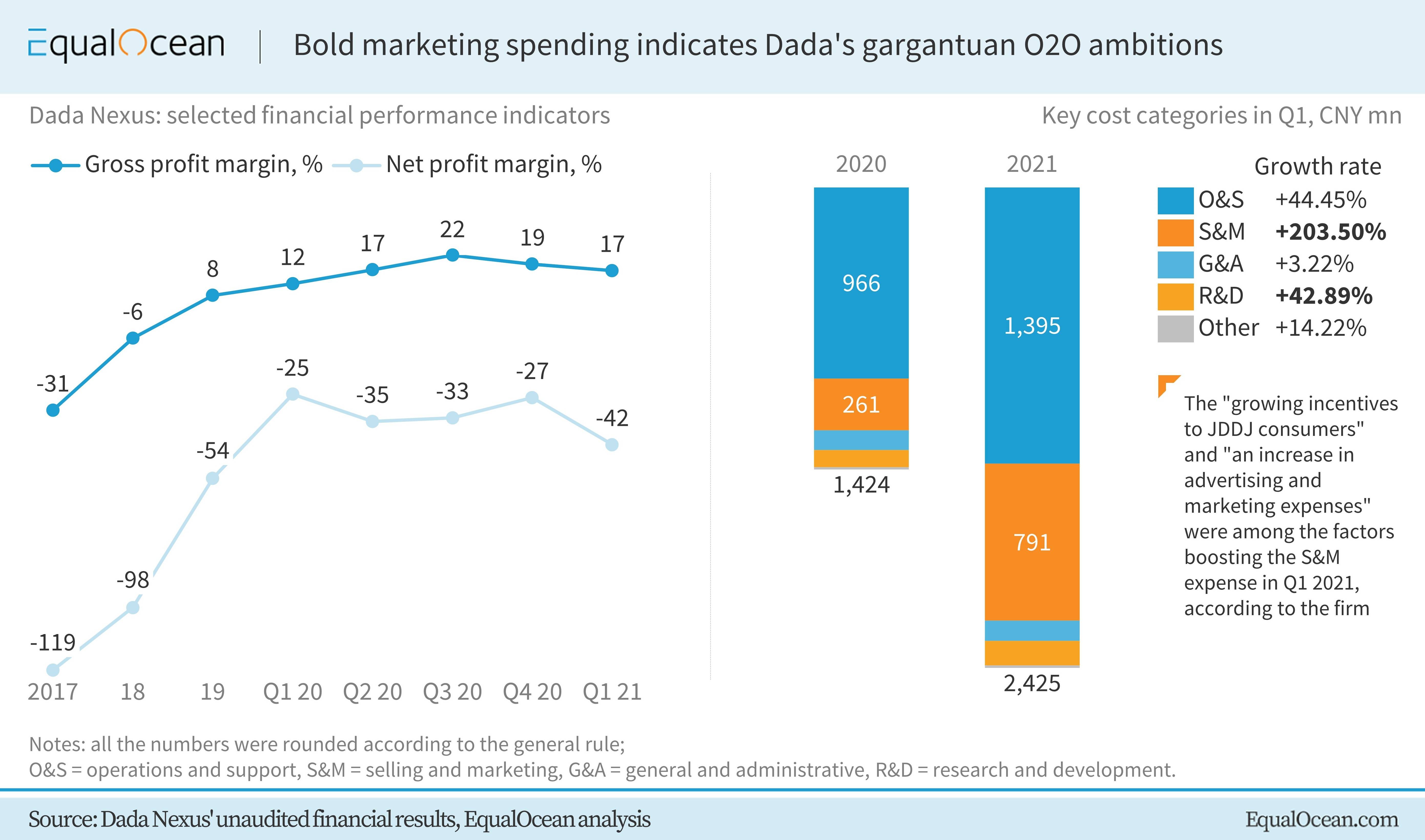 Resulting from the quarterly spike in business expenses, Dada's net loss mushroomed to CNY 710 million, much higher than the CNY 279 million recorded in the same period of 2020. As the company kept expanding both scope- and scale-wise (new geographies and product categories respectively), its net profit margin declined, hitting -42.46% in Q1. It is early to say whether the profitability can be achieved in the next few quarters. Yet, as was mentioned in our Q4 2020 coverage, Dada has a vast amount of cash on hand to maintain its fast-paced market expansion. And very soon, it might have more than that, as a deeper form of cooperation (or, maybe, reintegration) with JD.com is looming on the horizon.

One of the past quarter's highlights was the announcement in March of JD.com's (JD:NASDAQ) intention to invest another USD 800 million in Dada, which can make it the majority shareholder in the company. (The deal is expected to be closed in the second half of 2021.)

Such a move wasn't sudden, nonetheless: the two companies' documented relationship started in the third year of Dada's existence. In April 2016, it merged with JDDJ, which at the time was an O2O platform under JD.com, receiving USD 200 million from the latter. The two businesses were somewhat complementary, and Dada could gain more of the e-commerce giant's users, simultaneously improving JD's unit economics through its developed high-end offline channels. JD could also leverage Dada's on-demand delivery capabilities and localized store networks. In some scenarios, it may boost efficiency drastically.

In 2019, JD unveiled its omnichannel fulfillment program (earlier branded as 'Wujingtianze'; Chinese: 物竞天择 – 'natural selection'), aiming at lessening the cost pressure on brand logistics through extensive use of data. The way it works is a no-brainer. The order information is transmitted to the nearest retail store, which is then enabled to send the goods with a Dada Now rider, significantly reducing logistics expense. Furthermore, the linkage between advertising and user data systems has also added more resources to the nascent ecosystem. In April 2020, JD Supermarket further deepened its cooperation with Dada, accessing key store chains on JDDJ platform, including Walmart, Yonghui Superstores, BBK and Huaguan. JD consumers within a certain range around those stores could thus enjoy Dada Now's one-hour delivery services. More recently, Dada's CEO Jiaqi (Philip) Kuai said that his company's cooperation with JD.com had reached a new level, expanding to various consumption scenarios and product categories. This coalescence might be here to stay, as the direction is rather clear: JD.com's 500 million active customers, a number mentioned several times during this earnings call, currently don't have much O2O experience, according to Dada's data.

Dada's three core strategic development directions – O2O, intra-city delivery and software-as-a-service (SaaS) – have all shown some positive signs in this quarter, with both quantitative and qualitative enhancements.

Since China's 'lower-tier-cities' narrative evolved into a non-negligible factor affecting the largest players' strategies, Dada has been following the trend. By the end of Q1 2021, JDDJ had covered in excess of 1,500 cities and counties, doubling this figure year-on-year. Dada Now, concurrently, is present in 2,700 cities and counties.

In the recent period, Dada has diversified its product category spectrum, which now includes fast-growing non-grocery domains, such as consumer electronics and cosmetics. This last quarter was a turning point for these areas. In consumer electronics, the company's network scale reached nearly 9,000 stores, where it mostly facilitates sales of popular smartphone brands. Dada is also bringing all 1,000 offline Lecoo (a brand of Lenovo) stores online, providing on-demand access to Lenovo's PCs and other gadgets. In addition, the company has inked deals with a few locally known cosmetics retailers, such as WOW COLOUR and The Colorist.

Only partnering big brands, however, is a strategy often not effective enough in the diverse Chinese market. Dada has lately been connecting more small and medium-sized merchants in order to enhance the consumer experience. According to the firm's data, the number of completed orders by such vendors on Dada Now more than doubled year-on-year in Q1 2021. In the pharmaceutical category, the platform continued to improve the service menu, especially for long-distance and late-night orders, with the revenue soaring by a staggering 600% compared with the same period in 2020.

Omnichannel SaaS Haibo, Dada's relatively new project, was used in over 3,300 retail chain stores countrywide, as of the end of April 2021. Its network mostly covers supermarkets, recently extending to convenience stores and 3C (computer, communication and consumer electronics) outlets. After less than one year of development, Haibo has proven itself an effective tech-based tool. For instance, Dada claims that after implementing the system, the 15-minute picking-up completion rate of Zhongbaicangchu (Chinese: 中百仓储; one of the biggest chain stores in China) improved from 80% to 98%, while the out-of-stock rate dropped by 4%. Lotus Supermarket, a large retail company owning and operating 70 stores and two shopping malls, saw its sales in south China jumping by 167% in 2020 after embracing Haibo.

When covering Dada's 2020 results, we noted its ability to adapt and seize the chance under the changing market environment. In this quarter, the company showed that it is capable of going beyond the functionality of an on-demand retail marketplace and a huge gig economy platform. For one, its self-developed SaaS product is being deployed across the country and delivering real business results.

There are, indeed, some uncertainties related to the future of the JD-Dada tandem. However, it is hard to see now any hurdle that can prevent the O2O platform operator from gaining a larger share of China's untapped market. Dada is thereby poised to continue its quest for connecting physical and digital shopping experiences (or "bringing people everything on-demand"), while also empowering businesses with technological solutions.

Positive about Dada's prospects since its IPO, we keep our stance unchanged.