After a Stellar 2020, New Growth Catalysts Emerge for Dada Nexus

Resulting from its Nasdaq IPO in June and follow-on offering in December, the JD.com-affiliated O2O company found itself with sufficient cash on hand to keep expanding in the ample Chinese market. 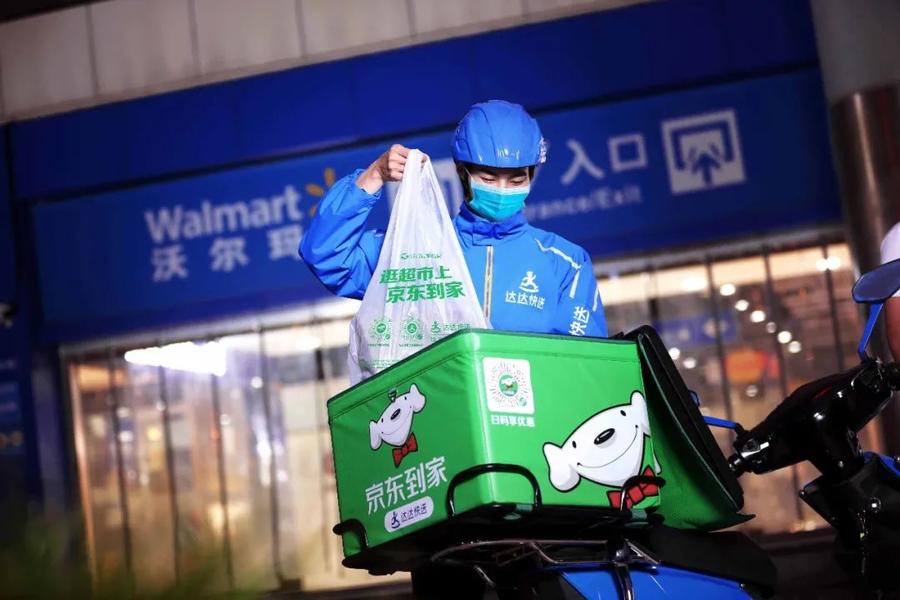 On March 8, Dada Nexus (DADA:NASDAQ), a company operating on-demand retail and delivery platforms in China, posted its unaudited financial results for the fourth quarter of 2020. The firm's annual revenue hit CNY 5.74 billion (around USD 881 million), up a staggering 85.2% year-on-year. On the next day, its Nasdaq stock soared 11.04%, propelled by a combination of solid financials and a marketwide stocks pullback.

Meanwhile, there have lately been a number of bellwethers signaling the company's undervaluation. For one, BNK Invest – in a note on Nasdaq's website – suggested that Dada's stock is currently oversold, with its Relative Strength Index (RSI) diving below 30. Less than one year since its IPO, the firm comes off as yet undiscovered by many in the investment space.

In November 2020, we analyzed Dada's competitiveness via its network and business models, as well as the key trends in the Chinese local on-demand retail and delivery industries. This article discusses the status quo of the company through the prism of financial analysis, also digging into Dada's strategic layout, plans and possible market developments. To approach these matters in a systematic way, we first take a quick glance at the duet of Dada's platforms – JDDJ (or JD Daojia) and Dada Now. 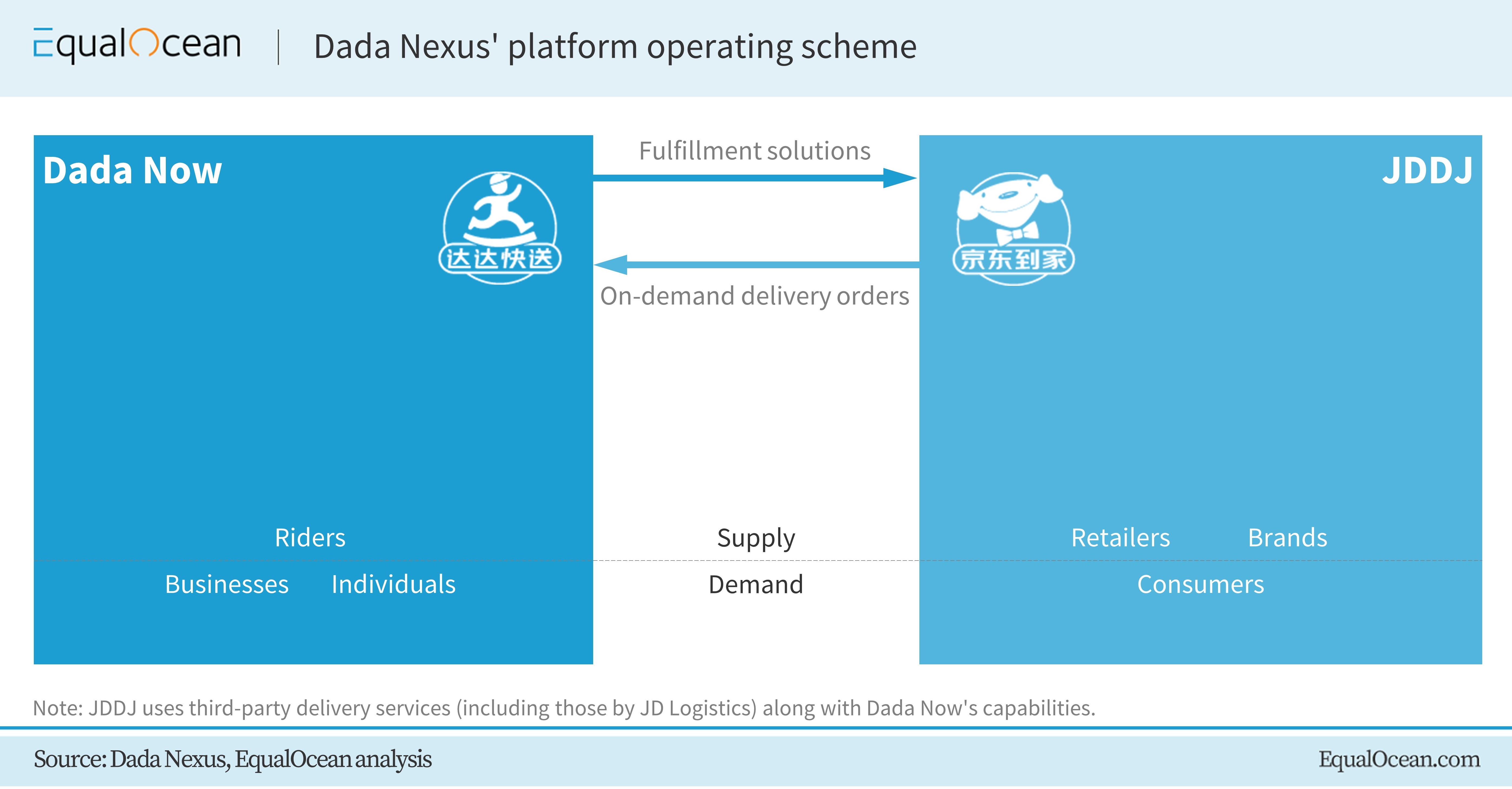 'Bringing People Everything on Demand'

Following the above motto, Shanghai-headquartered Dada has been developing two core businesses:

JDDJ, e-commerce titan JD.com's (JD:NASDAQ, 09618:HK) ex-spinoff that merged with Dada in 2016, is a local on-demand platform that connects retailers and brand owners directly with consumers. Besides groceries, its main legacy segment, JDDJ has now also extended its tentacles into a few red-hot FMCG categories like cosmetics and over-the-counter drugs, extensively partnering with national and regional chains. Furthermore, it has started to leverage JD's prowess in consumer electronics and reportedly inked a partnership with vivo, the world's fifth-largest smartphone maker by shipments, according to IDC, a technology researcher.

JDDJ had covered around 1,400 cities and counties in China by the end of 2020, per Dada's CEO Philip Kuai. Referring to data from Chinese consultancy iResearch, Mr. Kuai stated during the earnings call that JDDJ increased its share in the supermarket segment of the domestic on-demand retail market from 21% in 2019 to 25% in 2020.

Dada Now is an open on-demand delivery platform serving both merchants and individuals. At the end of 2020, its last-mile delivery services spanned 2,700 cities and counties in China. According to iResearch's report quoted by Mr. Kuai, in 2020, Dada Now remained the largest player in its segment, adding 6% to its market share, which thus reached 25%.

There is a certain degree of synergy between JDDJ and Dada Now: the former brings in traffic and ceaseless order flow, while the latter provides its ready-to-go delivery infrastructure solutions. Combined with Walmart's (WMT:NYSE) offline network and JD's top-notch logistics and e-commerce capabilities, they form a major alliance in China's mainland.

COVID-19 as a catalyst, Nasdaq IPO and broader expansion

A lot happened to Dada Nexus in 2020. After the COVID-19 outbreak was officially confirmed in China, the first lockdowns promptly put local online-to-offline (O2O) companies into a position advantageous over pure offline retailers. Dada, which saw its revenue grow by 66.2% in 2019, at the time was on a clear acceleration track – in 2018, the figure increased by only 57.2%. 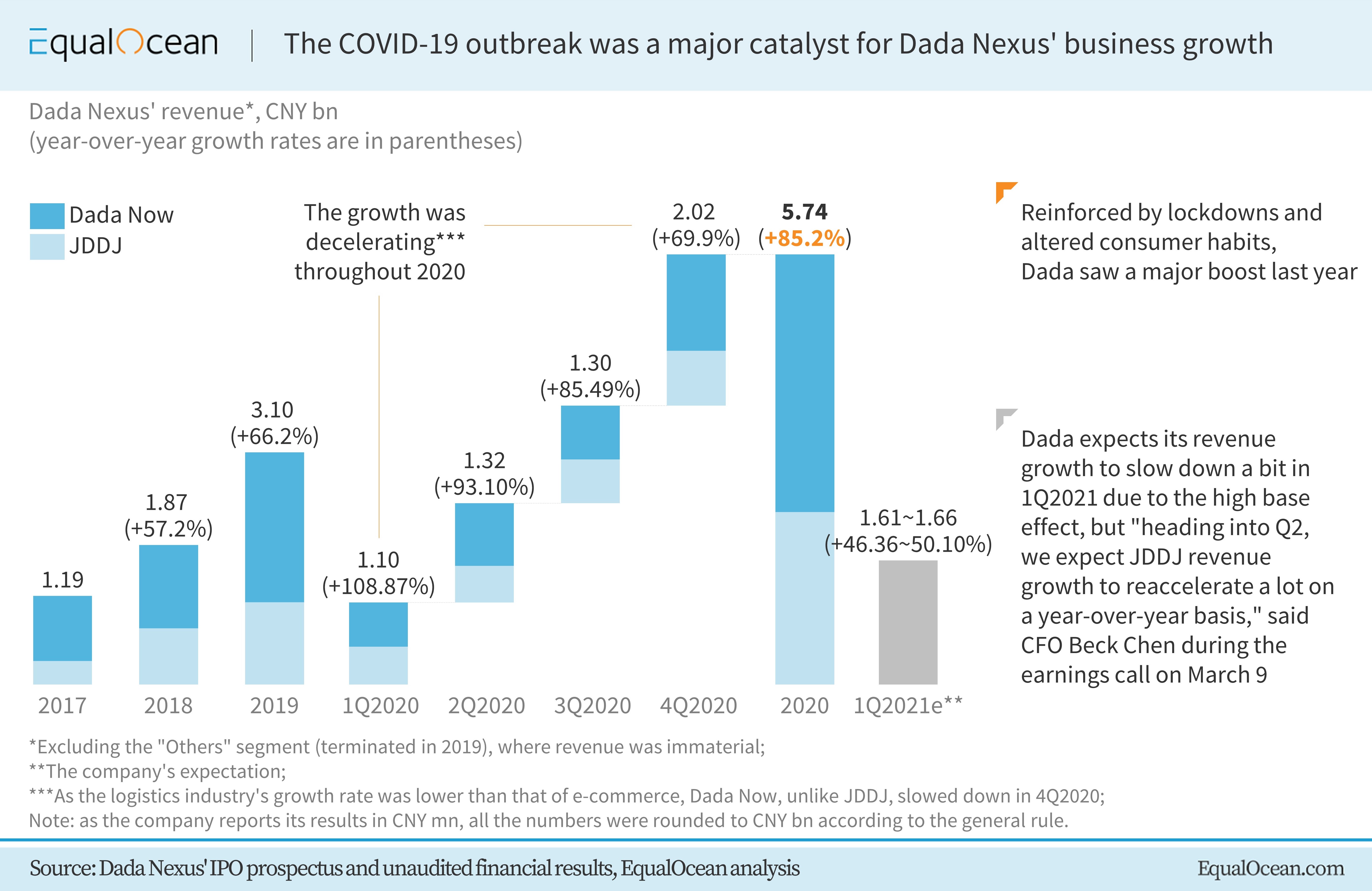 In the first quarter of 2020, a traditional 'low season' for the economy, amplified by the epidemic, Dada's revenue jumped by 108.87% year-on-year. The momentum was kept up throughout that anomalous year, and the company recorded an extra 85.2% of annual gains by the end of it.

These lofty rates, per Dada's CFO Beck Chen, led to a so-called 'high-base' situation. As a result, the company has projected its revenue for the March quarter of 2021 to be in a range between CNY 1.61 billion and CNY 1.66 billion (approximately USD 247 million and USD 255 million), or nearly 1.5x that of the same period last year. In the three months through June, however, Mr. Chen expects JDDJ's revenue to "reaccelerate much higher than like the 50% to 60%."

Dada's massive marketing spending continued over the pandemic period. In the fourth quarter of 2020, the company invested a record CNY 703 million (USD 108 million) in various incentives to JDDJ consumers and vendors, advertising and other activities. A positive sign was the decline of this number relative to the platform's gross merchandise volume (GMV), which, by the way, swelled by 107%, hitting CNY 25.3 billion (USD 3.89 billion) in 2020. 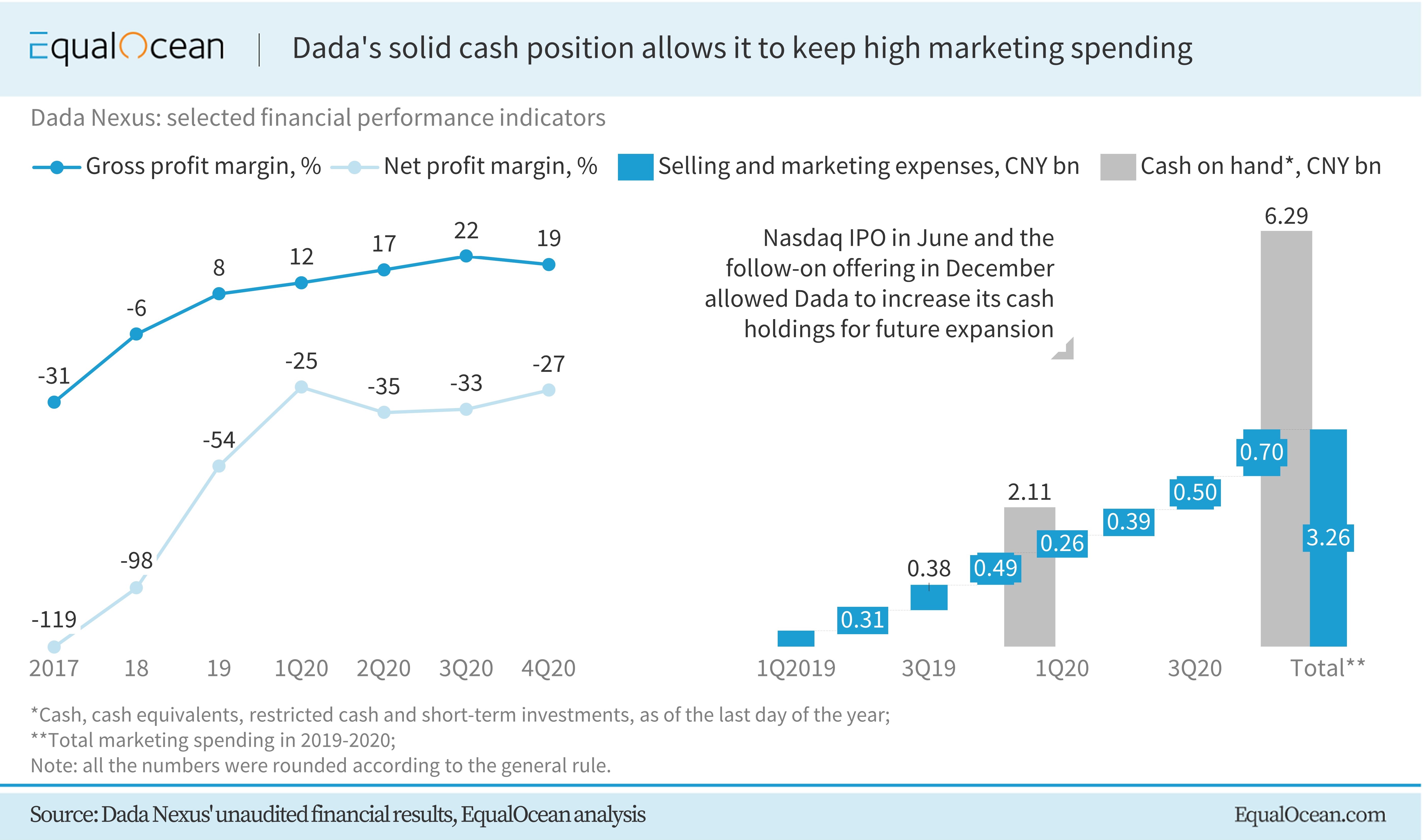 To fuel its cash-burning machine, Dada made some serious moves. An acute carpe diem feeling pushed it towards a Nasdaq IPO in June, where the company, underwritten by Goldman Sachs, BofA Securities and Jefferies, raised USD 320 million. In December, Dada bagged another USD 450 million in a follow-on offering.

The firm's bi-phase public debut helped it acquire enough capital to proceed with the aggressive expansion in 2021. Dada possessed in excess of CNY 6.29 billion (USD 968 million) in cash and equivalents as of December 31, 2020 – almost three times the 2019 figure.

Although rather deep pockets are not enough to foretell a company's bright future, a strong capital position is essential in the burgeoning on-demand delivery and e-commerce markets. At the same time, when it comes to the double-digit-growth stage, strategic aspects of corporate development appear to be more important than profitability speculations. And Dada's management team, it seems, has a knack here.

There are several significant maneuvers that Dada Nexus has plotted for 2021. All of those resemble elements of how China's other large tech upstarts have been developing their product portfolios.

First of all, the company's continuous category diversification is worth looking at. By entering new areas, such as cosmetics and pharma, Dada creates more two-birds-one-stone scenarios: not only does it improve consumer experience but attracts a raft of commercial partners, too. One example is its joint promotion program with Unilever (ULVR:LSE) and Procter & Gamble (PG:NYSE) during China's famous 'Double 11' shopping festival in 2020. This year, on Dada's radar are specialty stores, as well as bakery, alcohol and a few other types of goods that one "can get both in supermarkets and non-supermarkets," as the CEO put it.

To enhance working capital efficiency, Dada announced – along with its fresh financial report – that, starting from the second quarter of this year, it will readjust business arrangement for Dada Now's last-mile delivery service, which will result in revenue recognition change where the company will only book service fee without recognizing rider-related revenues and rider-related costs. This is a bold strategic move allowing the company to stick to the 'platform' identity and take more control over its operations.

The recent developments in the sector might threaten Dada's grip on the domestic on-demand delivery domain. At a macro level, the ultimate competition for consumers between tech giants must be pondered over: a part of the JD bloc, Dada has to contend with Alibaba-affiliated logistics and delivery companies, and, of course, with Meituan. New trends, such as the 'community group buying,' are altering the marketing and product strategies of virtually each of these players, testing their resilience.

Meanwhile, niche juggernauts are emerging at every corner. One name is Tencent-backed grocery platform Xingsheng Youxuan, a unicorn startup with over CNY 40 billion (USD 6.15 billion) in GMV in 2020. In the short run, however, there is room for everyone, as the penetration of consumer technology in China is yet to reach its apex.

Another well-known risk factor is related to Dada's major backers. JD and Walmart, taken together, hold over half of the company's shares and occupy over half of its board seats. This makes them more than just influential in the course of crucial corporate decisions. Such ties are famously a double-edged sword.

Dada Nexus is among those Chinese Internet companies boasting a clear positioning and development track. It is backed by the country's top e-commerce player and the world's largest offline retail chain. Such a background, indeed, imposes limitations on the firm's approach to the buoyant O2O market. Still, Dada has been navigating its business well in the rapidly changing environment, as the unaudited financial results and our due diligence have shown.

Since our latest coverage of the company, no red flags have appeared. We remain bullish on Dada Nexus: it creates fundamental, industry-shaping value and is always on the go.