The second-hand 3C platform is among the most promising businesses in the space in China. 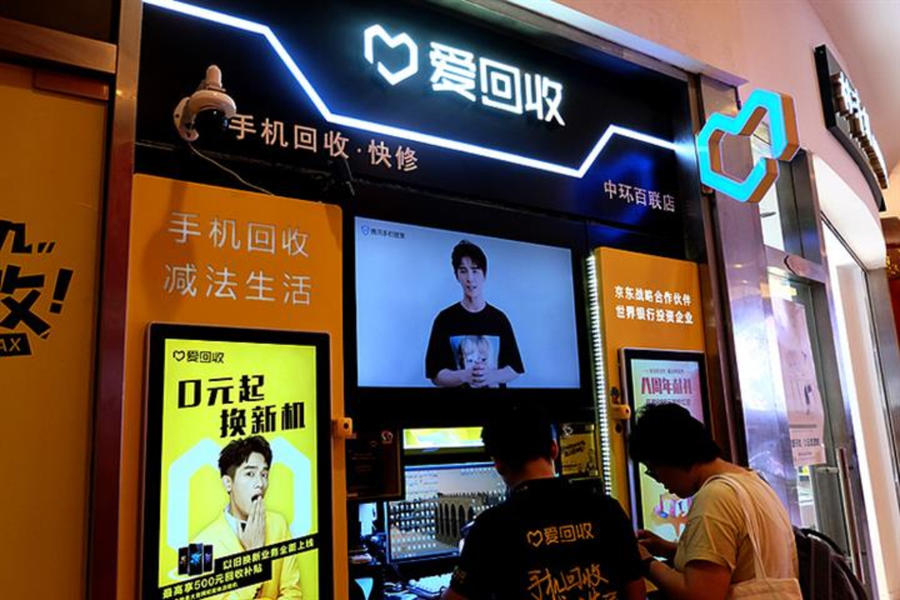 On June 18, 2021, Aihuishou was listed on NYSE under the ticker RERE by issuing 16.23 million American Depositary Shares (ADS). According to the company, 60% of the funds raised in the IPO will diversify services, and expand its AHS store network and sales. 20% will be used to improve technology capabilities further, and another 20% will be used for general operations. As the first ESG US-listed Chinese share offering, the IPO has attracted much attention.

Founded in 2011, Aihuishou is one of China's largest second-hand computer, communications and consumer electronics (3C) platforms and one of the pioneers in the industry. After ten years of development, it now has four major business segments, realizing a C2B + B2B + B2C closed-loop value chain: C2B recycling platform (Aihuishou), B2B trading platform (PJT Marketplace), B2C retail platform (Paipai Marketplace), as well as its overseas business (AHS Recycle). On the supply side, the JD.com and Aihuishou offline stores attract stable supply. At the processing end, it has set up seven regional operation centers and 23 city-level operation stations in China for proprietary inspection, grading and pricing. At the end of the sales, the PJT Marketplace can ensure the products flow at high speed (shortening the flow time by three times), while the B2C platform can make the products go directly to the C-end to improve the profit margin. 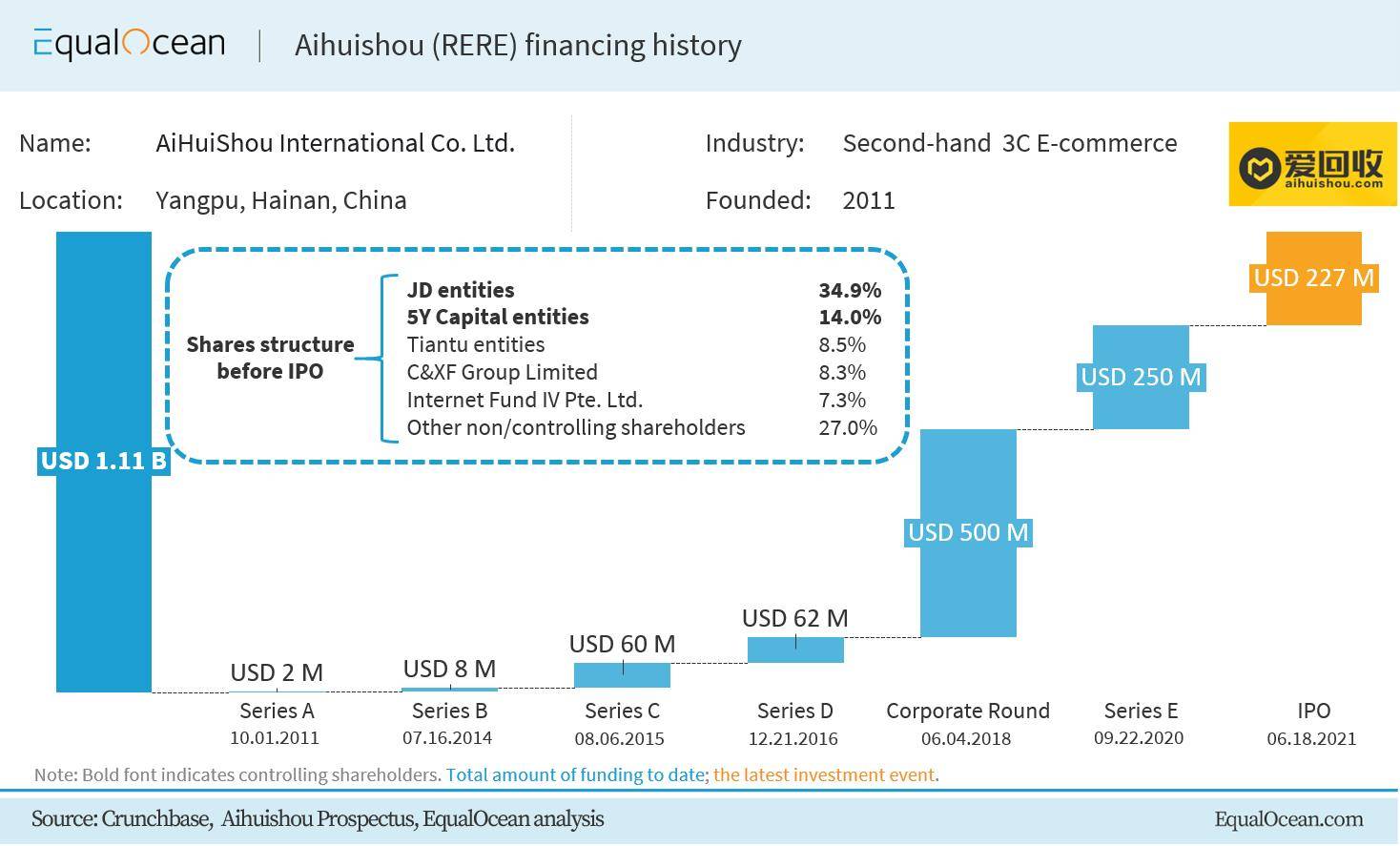 Aihuishou has completed six rounds of financing prior to its IPO. Many well-known institutional investors have great regard for the company, such as JD.com, 5Y Capital, IFC, Cathay Capital and Guotai Junan International. Before the IPO, JD Entities held 34.7%, being the largest institutional holder. 5Y Capital owns 14.0%, the largest VC investor, while Tiantu Investment and Tiger Global fund have 8.5% and 7.3%. Notably, in its IPO, two existing shareholders, JD and Tiger Global purchased USD 50 million Aihuishou ADSs respectively, showing an optimistic attitude towards its long-term development.

High operating costs are serious problems for the company. In 2020, the company's costs reached CNY 5.35 billion. When deconstructing the costs, merchandising costs accounted for more than 70%, mainly consisting of the cost of acquired products coming through the AHS platform and inbound shipping charges for its product sales. Although we think that the rising costs reflect the company's expansion plan, the high cost may damage the company's profitability.

The company's opportunities are obvious. First of all, Aihuishou joined a market with great potential. According to Aihuishou's prospectus, China's second-hand electronic products trading and service market has great potential. China's pre-owned consumer electronics transactions and services market size reaches CNY 252.2 billion GMV in 2020, and the market is expected to grow at a 30.8% CAGR to reach CNY 967.3 billion by 2025.

Secondly, the company occupies a high market share and maintains a high growth. Its total GMV reached 22.8 billion, and the number of consumer products transacted on its platform reached 26.1 million for the twelve months ending March 31, 2021, up 66.1% and 46.6%, respectively, year-over-year. In the second-hand 3C trading sector, in 2020, The company’s GMV for electronics and the number of devices transacted on its platform were both ranking the top and greater than the following five largest platforms combined.

At the same time, the profit model of the company's offline stores has been proved feasible. According to TMTPost, the early decoration cost of an Aihuishou offline store is estimated to be CNY 70,000 to 100,000, and the rent and salary expenses are about 30,000 CNY per month. Considering the average monthly sales revenue is about 600,000 CNY, and the gross profit rate is about 20%, the payback period of investing in such a store is less than three months. More than 98% of its stores have made profits, indicating that the company has a great chance to turn losses into profits in the future.

However, there are two obvious threats or risks. First, the company does not have an advantage in the whole second-hand e-commerce market, though it is a leader in the second-hand 3C sector. According to Big Data Research, in March 2021, Xianyu (Idle Fish) and Zhuanzhuan occupied about 90% of the second-hand e-commerce market, with a total MAU of over 70 million. In contrast, the MAUs of Aihuishou only take less than 2% of the whole market, through two platforms with only 1 million MAU. Although its main competitors may focus on other kinds of second-hand products, high traffic on these platforms means they can encroach on Aihuishou’s shares easily. 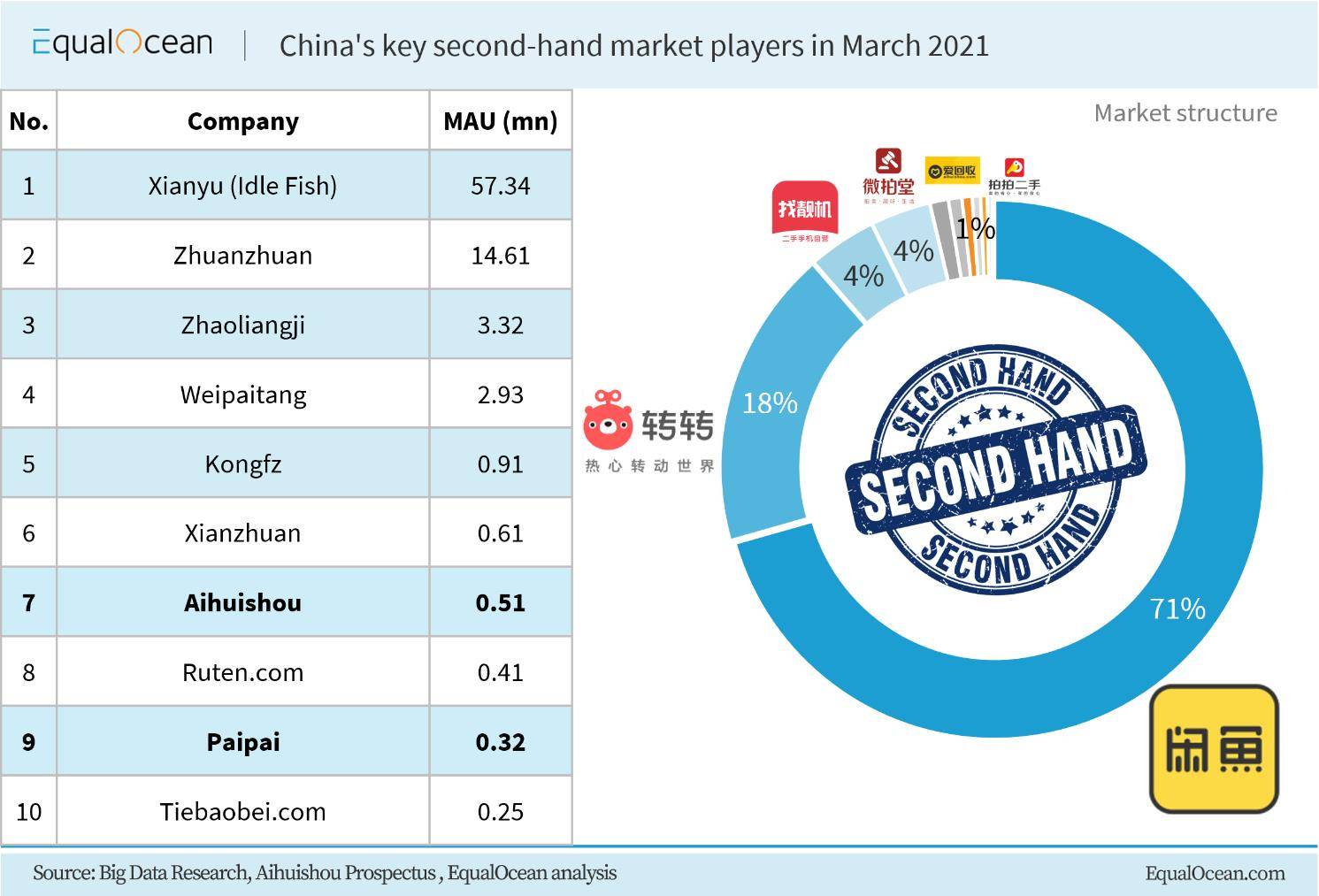 Another risk is that, before the IPO, the two founders sold their holdings at a discount, indicating a lack of confidence. According to the prospectus, founder and CEO Xuefeng Chen reduced 1,995,981 shares, and co-founder Wenjun Sun sold 600,645 shares in February 2021 in a series F with a price lower than the preferred shares. It may not be a good sign that the founders are selling their holdings at a discount when the company's operating cash flow is insufficient.

Considering that the company has yet to turn a profit and no Chinese ESG company can be used as comparable companies, we used EV/revenue ratios to analyze its valuation and picked five related companies: BQ, MKD MPNG.Y, PDD, and SECO. The average EV/revenue of the competition is 5.42x, while RERE's EV/revenue is 5.43x. Based on the valuation and the analysis of its opportunities and threats, we gave it a neutral rating.

Further analyzing the strategies that it should adopt, we think the company may need to focus on the following two ways to maintain its industry advantage. First, helping to establish industry standards is a way out. Second-hand recycling is a specific non-standard industry. The second-hand pieces of 3C equipment sold online and offline are numerous brands and of uneven quality. The establishment of a relatively transparent price evaluation mechanism can stabilize its market share. Secondly, it is necessary to control C-end costs. In the second-hand e-commerce market, both users and sellers naturally gather on the top platforms. A higher user utilization rate will also reduce the marginal cost of each offline store, which we think is the key to turning losses into profits. Considering this IPO aims to develop new sales channels for the B2C platform and further improve the penetration rate of C-end purchases, we think it is a good omen and is worth further attention.