The central government's probes into major tech-oriented transportation companies are obscuring the development of the likes of DiDi. 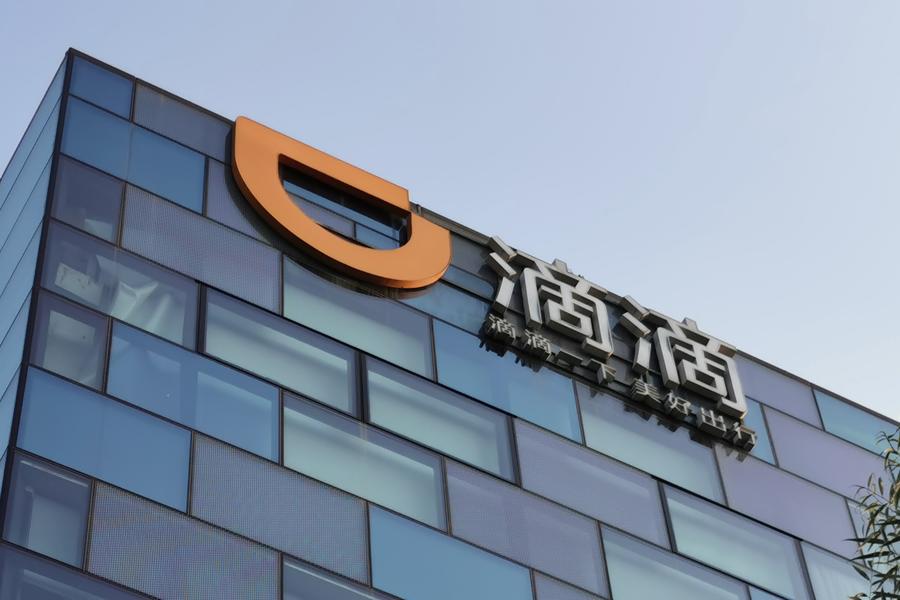 ●        DiDi took only 20 days to be listed in the US market, which appeared odd to investors and regulators.

●        With over 22 rounds of financing, the mobility company has long been under pressure to make profits for its shareholders.

●        DiDi has occupied a large share of the world's mobility market but still struggles to reach profitability because of high operating risks.

●        The Chinese government's investigation inserted high political risk into any plan to invest in the company's stock.

On June 30, 2021, DiDi was listed on the New York Stock Exchange with a ticker of DIDI. It offered 317 million ADS with an initial price of USD 14 and raised at least USD 4 billion during its IPO. Oddly, the company took only 20 days to go public and determined the issue price only three days after the roadshow, one of the shortest IPO processes in recent years.

The IPO price increased to USD 16.65, up 18.93%, on the IPO day, and the company's market value reached USD 79.8 billion. However, its stock continued to depreciate after that.

Founded in 2012, DiDi Global has been constantly strengthening its business in a quest to become the world's largest mobility technology platform. In 2013, owing to massive investments from Alibaba, Tencent and a few other companies, Kuaidi Dache and DiDi formed a duopoly market in the mobility field in China. The two companies merged in 2015, rebranding as DiDi Global. In 2016, the company acquired the Chinese branch of Uber, monopolizing the domain in the country.

Since its establishment, DiDi has received 22 rounds of financing, with a total amount of more than USD 20 billion. These funds came from the finest investment institutions such as SoftBank, Sequoia Capital and well-known companies such as Apple, Toyota, Tencent and Alibaba Group. According to its prospectus, prior to the IPO, Softbank (Vision Fund), Uber and Tencent became DiDi's largest shareholders, with about 41% shares. The company has also attracted investment from several state-owned institutions, such as Ping An and Bank of Communications. 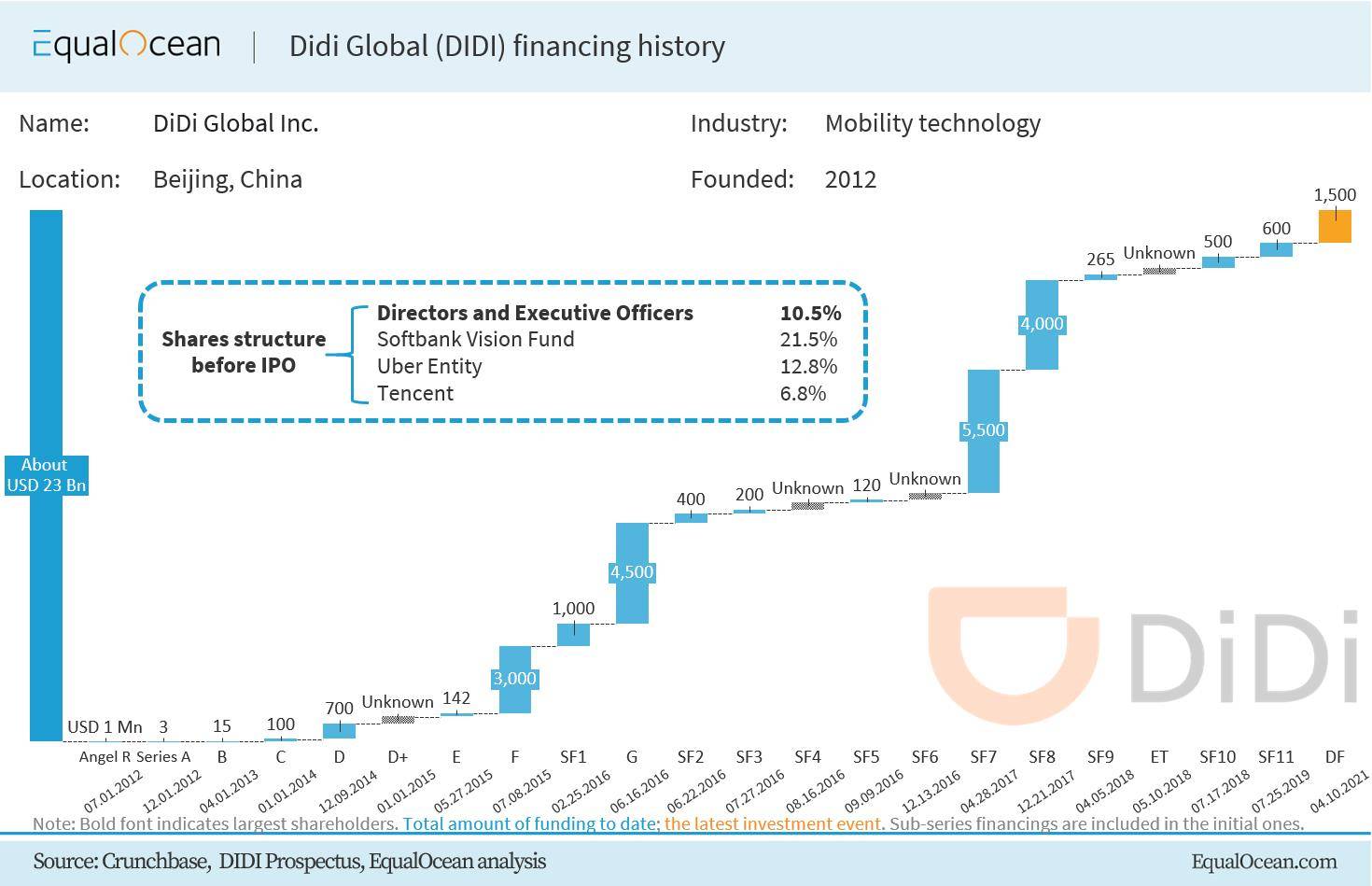 We found at least two reasons why DiDi chose to be listed so quickly. First, DiDi has attracted a bunch of investors since the company was founded. But for many years it did not make a profit, remaining a money-burning startup. In other words, the IPO of DiDi was intended to keep the lights on. Second, we believe that the blocked IPO of Ant Group also had a negative impact. Completing the preparation of all the documents and going public within one month may have been to avoid the supervision of the Chinese government. The latter argues that DiDi may have some operation data that does not conform to the laws of either China or the United States.

According to some industry insiders, DiDi earlier planned an IPO – in 2015. This is mainly due to the rapid rise of the Chinese stock market in 2015, with the Shanghai Composite Index soaring by 60% and the Shenzhen Component Index soaring by 122% that year. However, the stock market disaster in the following year postponed its listing.

In 2021, with the demise of COVID-19, the US economy is expected to become overheated, and Fed rates are expected to rise in 2022, which may have a negative impact on the stock market. 2021 might be the last chance for DiDi to go public in the recent economic cycle. If DiDi is not listed yet this time, the initial investors' payback periods may be further prolonged, with some even choosing to divest.

According to the IPO prospectus, DiDi's total revenue in 2020 reached CNY 141.7 billion (USD 20.5 billion), slightly lower than that in 2019. From 2018 to 2020, DiDi's annual net losses were CNY 15 billion, CNY 9.7 billion and CNY 10.6 billion, respectively. Among the revenue segments, China's travel business accounts for more than 94% of DiDi's total revenue in recent years, of which online car-hailing income contributes more than 97%. This indicates a skewed revenue mix. DiDi attracted services to over 493 million annual active users and powered 41 million average daily transactions by the end of Q1 2021. According to the company's estimate, there are 15 million active drivers in the world every year. In the 12 months ending March 31, 2021, DiDi's global average daily trading volume reached 41 million. The total trading volume of the whole platform was CNY 341 billion, ten times ahead of the nearest rival in China. DiDi has formed a monopoly market in the country's ride-hailing sector. And it seems abnormal for an absolute industry leader to have continuous large losses.

It is worth noting that DiDi broke even and made a net profit of CNY 5.5 billion in the first quarter of 2021. Nevertheless, about CNY 12.4 billion was a floating investment profit, and the company still suffered an operational loss of CNY 5.5 billion. Before March 31, 2021, the last day of the reporting period, DiDi deconsolidated the community group-buying business, Chengxin (which was only put into operation for one year) from the Group. The split removed the loss of Chengxin from the statements and converted it into a floating profit of 9.1 billion investment revenue, which looks like window dressing. This, we think, also showed an aim of going for a quick listing and a high valuation.

On July 2, 2021, three days after DiDi's IPO, the Chinese government conducted a network security review of the company on suspicion of collecting user information in serious violation of laws and regulations. Shortly, new user registration of the DiDi app was banned, and then 25 apps related to the company were required to be removed from the App Store and Google Store. 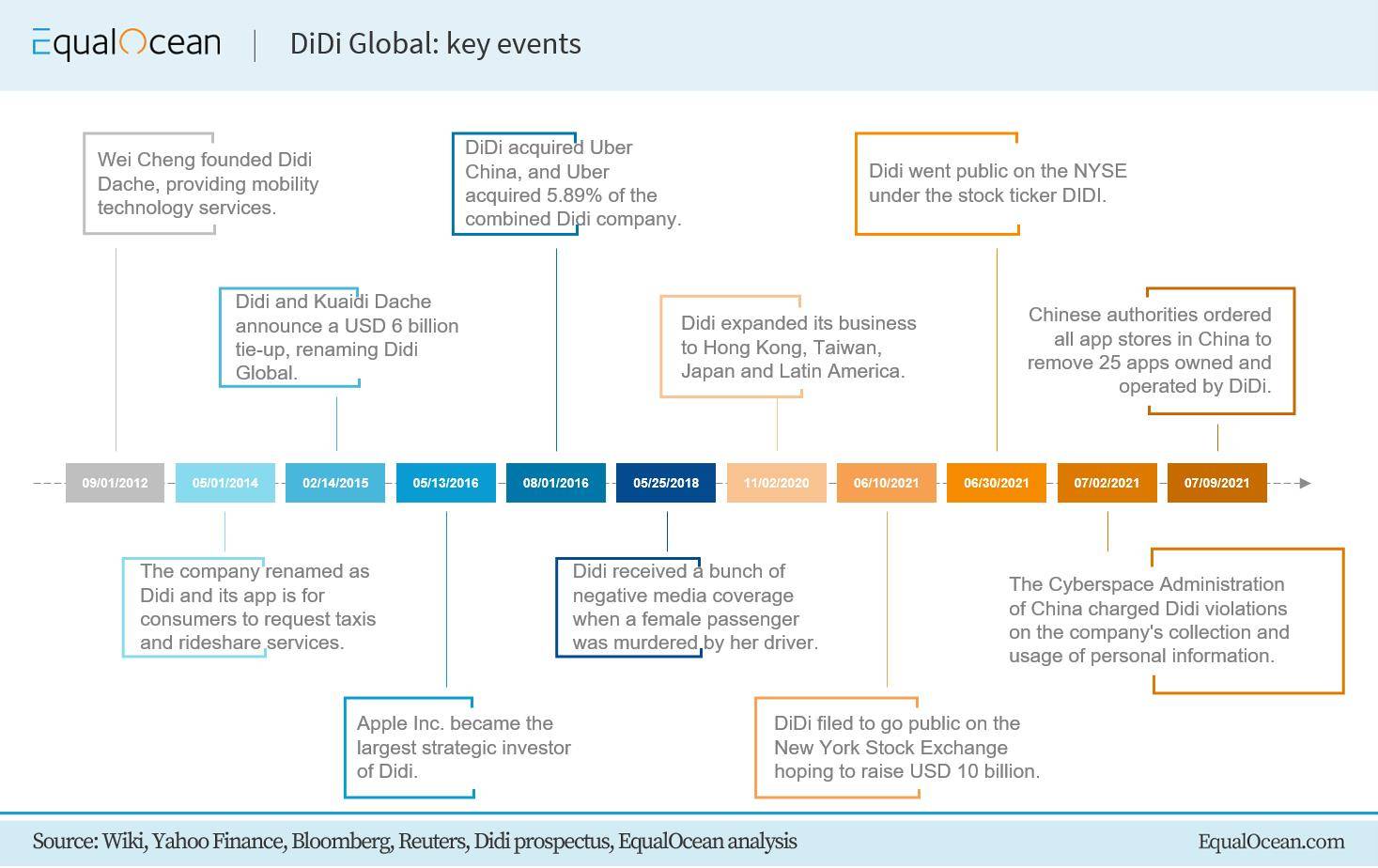 According to EqualOcean's research, DiDi launched a drive recorder in 2017. This device provides high-precision surveying and mapping data of China's urban and rural areas, and it is mandatory for all contracted drivers to install the recorder – otherwise, they won't be qualified to leverage the firm's platform.

On March 31, 2021, the SEC issued the Holding Foreign Companies Accountable Act (HFCAA), which stipulates that the Public Company Accounting Oversight Board (PCAOB) is responsible for supervising the audit institutions of listed foreign companies. For example, the inspection team should have access to all working papers. However, DiDi's papers contain much important information, such as the mentioned high-precision surveying and mapping data. Considering DiDi's monopoly position and huge user base, once the US government obtains these data, China's national security is bound to face a great crisis. The company was investigated because it was suspected of unauthorized transmission of important data secrets to the United States. Although the investigation is not over, DiDi's bizarre listing and the extremely harsh wording of the Chinese government have magnified the political risk enormously.

Another risk comes from its revenue model. The single revenue model determines that the company can only rely on increasing the commission rate taken from drivers. As a result, the drivers are often the object of complaints and dissatisfied feedback, which has also led to the intervention of the regulatory authorities many times. According to Xinhua.cn, the de facto commission rate has risen to 25% or even higher, far higher than the 21% promised by DiDi. Meanwhile, the detailed calculation of the commissions is unavailable for drivers. Even if DiDi continues to increase the commission rate, the company still does not achieve consolidated profit growth, indicating problems in the operation of the company and its business model.

To sum up, considering the political risks and potential operational problems, we do not think DiDi stock is a good short-term investment target. Besides, there is a looming risk of delisting. (Wall Street Journal reported on July 29, 2021 that DiDi is considering going private and compensating investors, but DiDi commented later on that the information was untrue).

CONTACT US
Scan QR code to contact us for professional consulting services
Next article
Explainer: What Is SAMR, the Sheriff of Chinese Markets