The silver market will be the next blue ocean for the consumer goods market in China. 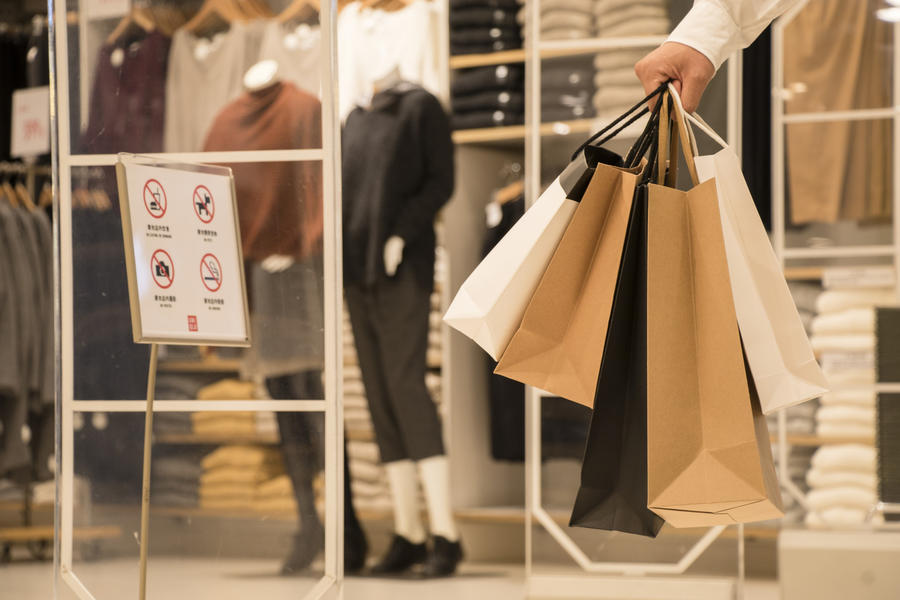 'Grandpa Beihai' (Chinese: 北海爷爷) is a hotkey opinion leader (KOL) on Douyin – Chinese 'Tik Tok,' who defines himself as 'a 74-year-old young man who lives his  life.' This elderly gentleman even uses more products than many young people – like essences, perfume, hair glue, and facial masks. His attitude to life has attracted 14 million followers on Douyin. On the Chinese Internet,  we can find a clear trend that this older generation is getting mentally younger.

In 2021, elders aged over 50 constituted over 25% of the total population. As the only country worldwide with an aged population of over 100 million, great opportunities are hidden in the 'grey-hair' market. 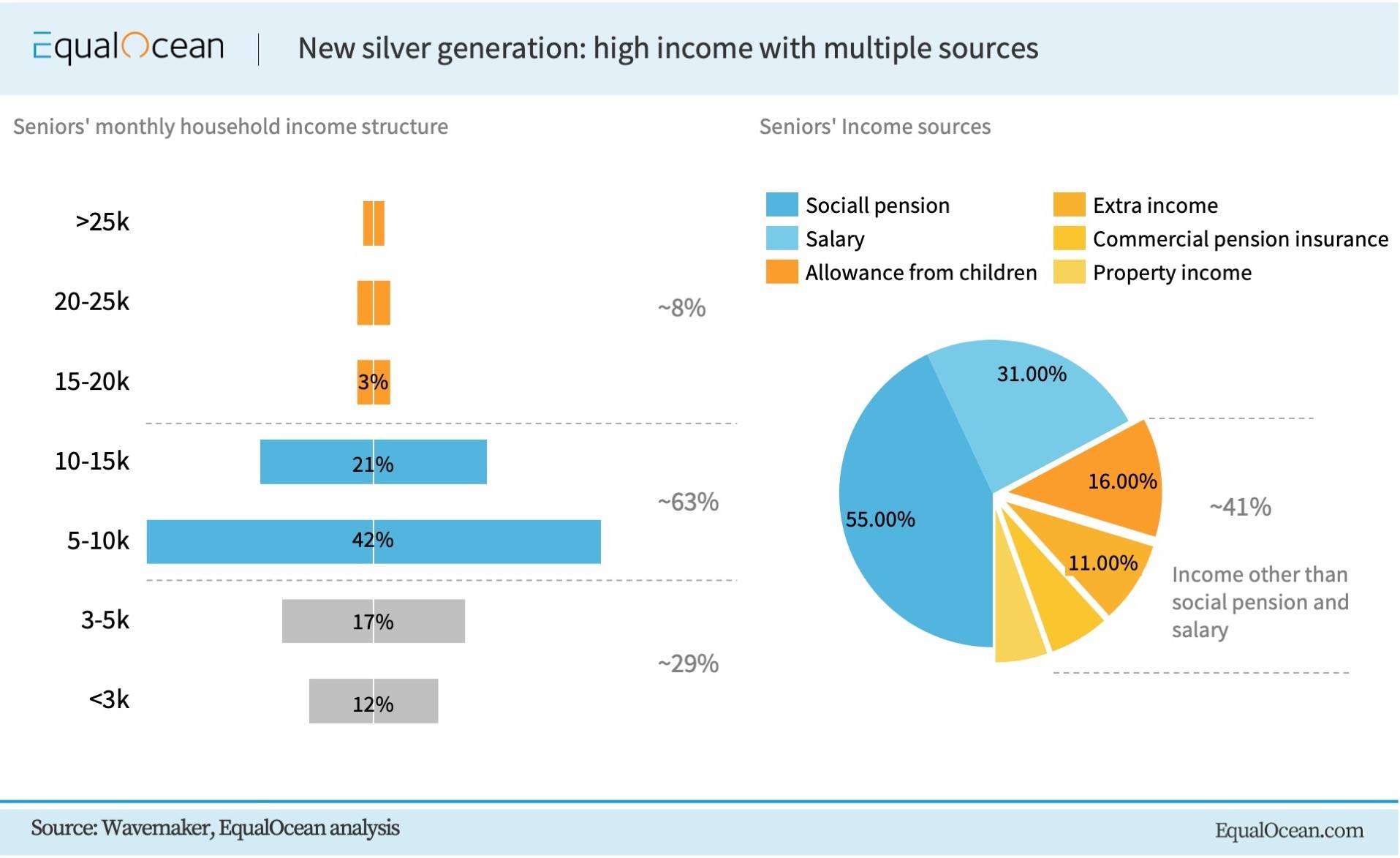 The urban seniors show an 'olive-shaped' income structure, with over 71% of them reaching middle-to-high income, of which 41% comes from sources other than the pension and salary. However, markets and brands are focusing on the young generations, leaving the elder population neglected. 63% of the seniors' population is gathering in the middle, while the industrial supply is polarized, with the focus on either bottom-demand or the high-ends.

Here we take a fresh look at this silver population and discuss what might be the investment opportunities hidden therein.

Seniors in China are actually not yet 'old.' When Bismarck proposed 65 as the retirement age 140 years ago, the average life expectancy was less than 45 years old – now the average life span in China reaches 76 years old. We believe before 75 should be considered as 'post-middle-age,' as they are mostly healthy and energetic.

The consumption upgrade is happening to those people as well. The saving habits they have are the bedrock of a  savings trove which they can consume now when they have plenty of flexible time. Many interests have been created with their abundant free time, with diversifying demands showing up. What is more, the internet has turned into an important shopping and news channel.

According to the China Internet Network Information Center (CINIC) that by end of June 2021, netizens over 50 years old accounted for 28% of the total number, reported 283 million. The percentage was only 9.4% five years ago in 2016, an absolute number increase of 220 million.

The richest generation of the elder population in China has come.

We believe the silver economy has two meanings. First, the elder population are treating themselves, and second is children supporting their old parents. Elder people, especially those between 65 to 75 years old, have been saving for their entire lives as a Chinese tradition, and are getting support from their only child, who is likely riding the wave of rapid development within the country and getting rich. For population that just entered the 50+ years stage, who are mostly highly educated, we see higher standards on life and better jobs with higher salaries than the previous generation of seniors.

The consumption upgrade has penetrated into the silver population as well. Though they still spend most of their money on food, they become extremely picky and care more about their health. They are willing to pay a premium for better food and health supplements.

Furthermore, the buying decisions seniors in China are highly reliant on friends' recommendations. If a product is endorsed by others, they are willing to pay more and stick to that. The extreme high adhesiveness is another key characteristic.

Based on what we discussed, the silver market is huge but vacant.

The Internet has become more prevalent, which significantly lowers the education costs for brands. Before, brands can only reach out to elder customers via television and newspaper, which take much longer. Now, as the silver population spends a certain time online through short video platforms and social media, they have more exposure keeping themselves up to date, which will be a perfect time for brands to expand.

However, the great potential has not been dug. The dumbbell-shaped supply doesn't meet the olive-shaped demands that the most clustered customer groups are served by the most limited supply end. The market still treats the entire silver market as a whole without subdivision, thus a limited variety of products and services are provided. For example, 90% of the 'silver food' is instant-kind of powder that serves as health supplements, which does not satisfy their increasing consumption demands on health.

From EqualOcean's projection in an aging product market report, the market size will grow at a CAGR of 11.43% in the future ten years, to meet the great demand.

In a comparison, Meiji – one of the top dairy companies in Japan, started to break into the silver market at the early stage of the country moving into the aging society, by developing several new types of yogurts that help prevent flu and protect the immunization system, as well as reduce uric acid and relieving gout.

In Germany, some 'silver deli' stores provide almost all kinds of food from food to beverages that target elders with different ages and chronic conditions, represented by nutrition-adjusted prepared food and low or non-alcohol beer, which satisfied senior foodies with healthier options.

Opportunities hidden: The market will be subdivided

The markets have been chasing the 'young' trend in order to cater to the z-generation, leaving the elder community ignored to some extent. However, the truth is, the silver-haired population also has diverse demands in almost every single sub-sector in the consumer goods market. Their demands are waiting to be fulfilled.

Look back to Japan, where the aging issue is way serious than in China, but which also means the great opportunities in the consumer goods market are still available in China. when seniors with age over 65 in Japan took up over 14% of the total population in 2000, companies started to heavily deploy in the silver market with tons of new brands born during the next decade. Now in China, the group of old people only accounts for 13.5%, and elders over 50 years old account for 25% of the total population. Now the percentages for Japan reported 28.9% and 47.6%.

Of course, many brands in the food and beverage industry already noticed and broke into the market. For example, Nongfu Spring (Chinese: 农夫山泉), a water brand in China, launched 'Lithium water' that targets the silver population; it contains over 0.2mg/L element Li, to help reduce many side-effects of medication and help with neuro control. Want Want (Chinese: 旺旺), a Chinese old beverage brand launched a series of diary beverages that is as tasty as those 'kid milk' but with more microelements, fiber, vitamins, and minerals to help with the health issue of elder people.

The thing is there are more sectors that have not been explored. 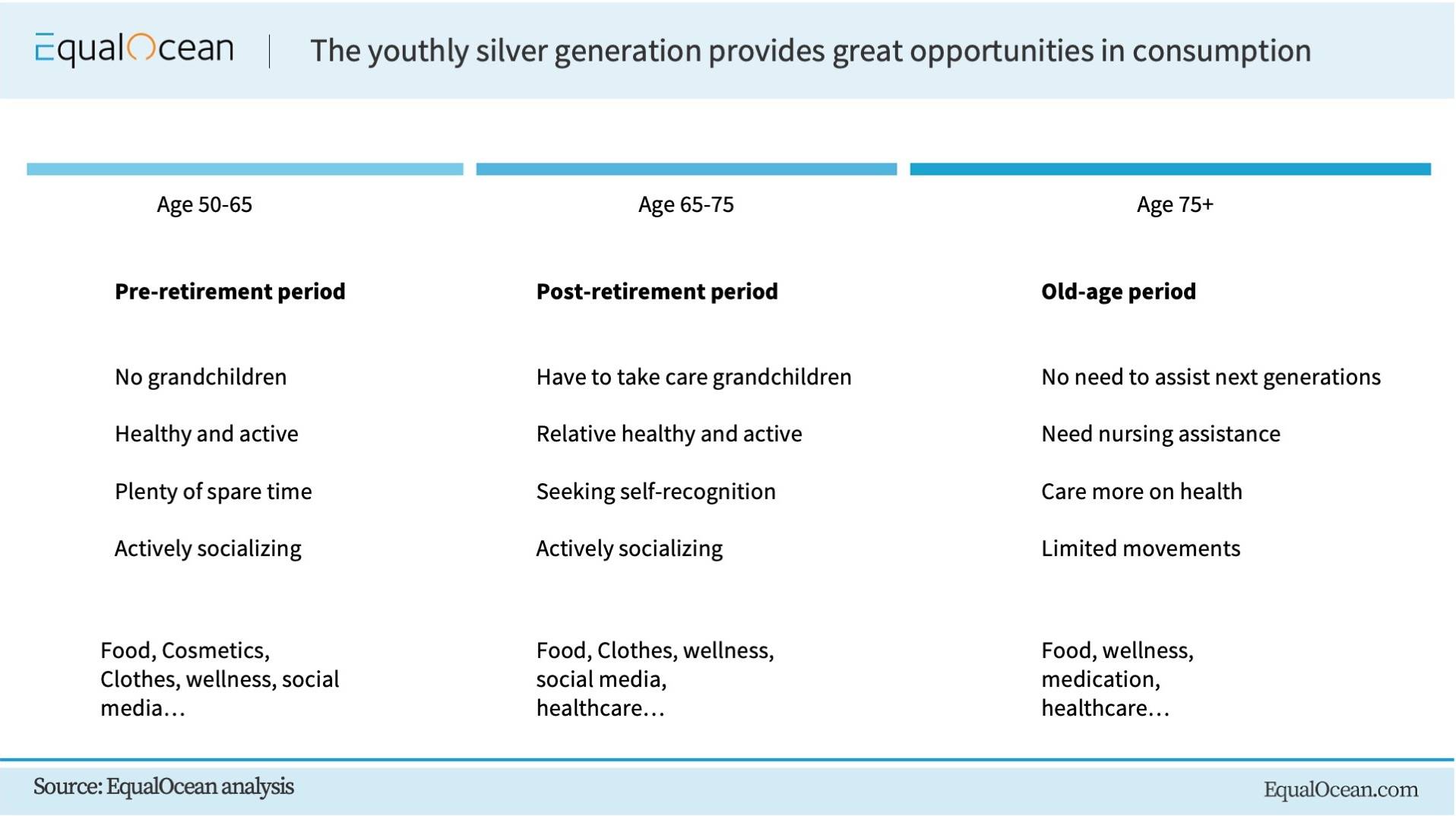 Elders, especially women, who just get out of the family pressure, whose children live on their own and grandchildren already grew up, started to live their own lives. A Japanese sports company – Curves – which focuses on women at the gym, precisely locked on female silver customers, stood out rapidly among all the traditional gyms and spread nationwide. This is a huge market that investors can dig through.

What is more, the social needs of the elder population have been suppressed. Doesn't have to take care of their families, they have enough spare time but nowhere to consume. Just like young people, they like to 'show off,' they want to share their lives, showing people what they get. For example, Xiao Guan Tea (Chinese: 小罐茶), a new tea brand that spends great effort on the design and outlook without downgrading the contents, blazed a trail towards young generations. It is something that people want to 'show off' to friends and social media. Same logic to the silver community, they have certain needs to share what they have with friends, but limited buying options out there. Also, the dating demands are awaiting to be fulfilled among the single silver population. When tons of dating apps show up in recent years that target different populations, like Asian, LGBT… but not for elders. With more silver netizens in China, this will be an investable subsector.

Maybe in the future, there will be a platform that gathers everything the elder people need – we are so sure this is a blue ocean that remains unexplored. Every single sector in the consumer goods market now needs to be redivided for the silver generation.

Just as what 'Grandpa Beihai' says, ''I am a 74-year-old young man and I take my life seriously.'' The interests of elders should be expressed and should be taken seriously.