Ping An Good Doctor didn't show strong growth momentum on par with its peers —— at least from the financial perspective. 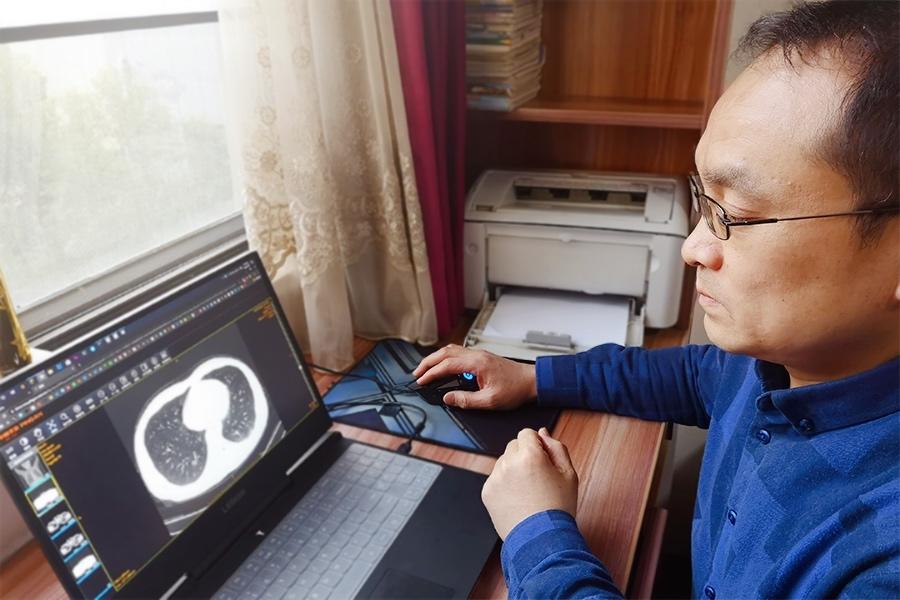 China's online healthcare industry is entering its second decade of development this year, and it is expected to be more promising than ever—in terms of breadth or depth.

The COVID-19 pandemic is one of the most powerful driving forces, leading to a surge in demand for remote consultation and medicine sales. It also facilitates people's desire and determination to manage their health more actively. An Accenture survey finds that nearly half of its respondents (n=1,779) increased their use of online health services compared to the year before the outbreak, while over 80% showed an extremely strong willingness to try telemedicine in the future. 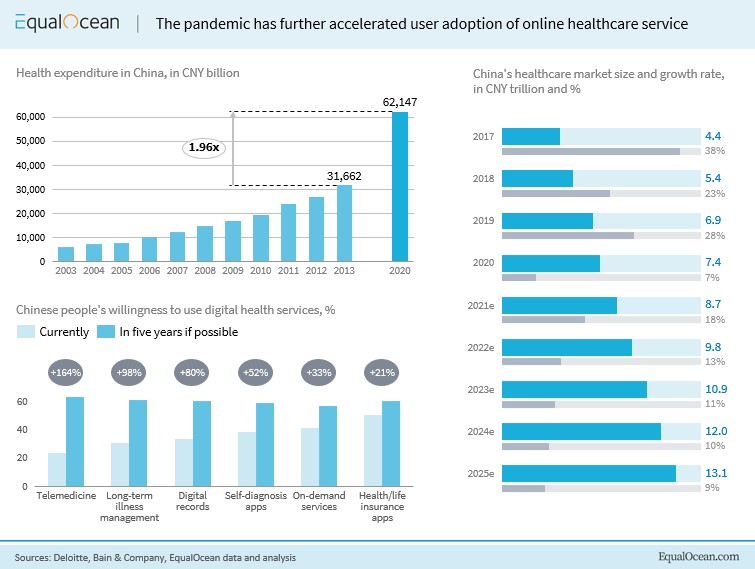 Apart from the fact that the pandemic has accelerated the pace of user adoption of online services, several pain points within the healthcare industry are also worth mentioning, for example, the scarcity and uneven distribution of quality medical resources, poor medical service experience and the growing deficit of basic public medical insurance. A bunch of online players has received a fair share of attention for their roles in helping to address these problems. They include WeDoctor (Chinese: 微医), Chunyu Yisheng (Chinese: 春雨医生), Alibaba Health (0241:HK) and JD Health (6618:HK), to name but a few, and Ping An Good Doctor is one of the best examples.

a) Online medical services: Provides users with online consultation, referral, registration, and online medication purchase and drug delivery services. The reported revenue in H1 2021 was CNY 1,066.8 million (up 50.6% year on year) with a 51.9% gross margin, which was largely attributable to the significant growth in revenue from membership products, medication purchase and drug distribution, according to the 2021 interim report.

b) Consumer healthcare: Standardized healthcare service packages consisting of health check-ups, aesthetical medicine, dental exams and genetic testing offered to individual and corporate customers. In the first half of 2021, it pulled off a post-epidemic recovery, with revenue leaping 66.1% year on year to CNY 713.9 million.

c) Online mall: E-commerce platform for medical and health products such as OTC drugs, dietary supplements, medical devices and wellness products such as fitness equipment and accessories. During the reporting period, revenue from online mall business amounted to CNY 1,908.8 million, representing a year-on-year increase of 27.9%, while the gross margin fell 3% due to fiercer competition in the industry. 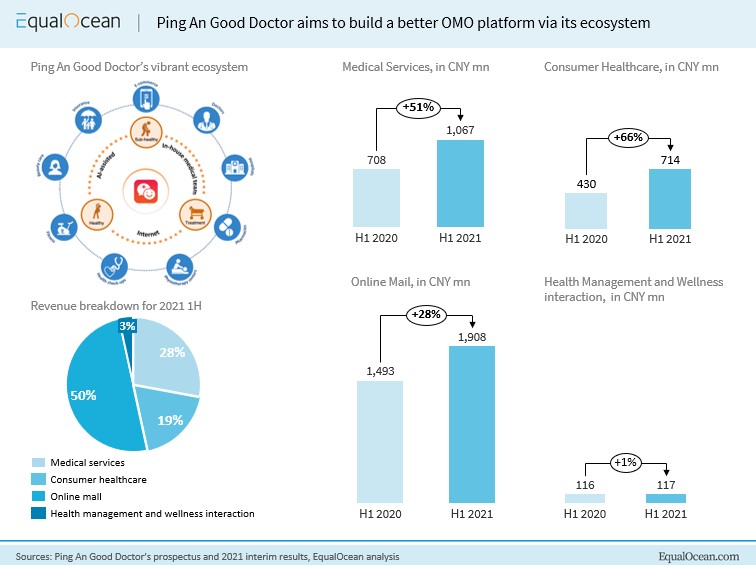 In April 2015, Ping An Good Doctor launched its own mobile app, and as of 30 June 2021, the number of registered users reached 400 million — although half of them were acquired via plug-ins operated by Ping An Group. The number of paying users also soared  69.6% to 32.1 million in the same reporting period. The cumulative consultations grew by 17.8% to 1.18 billion. Moreover, the company stepped up its efforts to boost user activity, with monthly active users rocketing from 5.6 million in 2015 to 72.62 million in 2020. Of course, Ping An paid a lot for this. EqualOcean estimates its sales and marketing expenses exceeded CNY 2 billion by 2021 given its faster growth rate.

The resources possessed by Ping An Good Doctor are another reason to believe in its potential. As of 30 June 2021, the company had contracted more than 38,000 external doctors and opened more than 450 so-called Famous Doctor Studios to provide both online and offline services. According to the aforementioned interim report, its hospital network comprised about 3,000 hospitals, where over 50% were 3A hospitals, the highest of China's three-tier public hospital system. Moreover, Ping An Good Doctor leverages its supply chain capabilities to supply offline pharmacies. The number of partner pharmacies had increased to 163,000, covering 379 cities in 32 provincial-level regions across China over the reporting period.

Financials: it is still in the red

Despite all the encouraging numbers from the operational side, Ping An Good Doctor's financial performance was not as stellar.

The revenue for H1 2021 amounted to CNY 3.8 billion with a 39% year-on-year increase. Although this number is higher than the 21% for the previous fiscal period, it slowed dramatically if we look at the 150% growth rate for the first half of 2018. Besides, along with the shrinking gross profit margin (-3.1% year of year), Good Doctor's loss for the period shot up from CNY 213 million to CNY 879 million over the past year. Similarly, the adjusted net loss under the Non-IFRS measure also quadrupled. The company attributed this contraction to a higher use rate of membership products compared with the same period last year.

In an interview with CNBC, Jessica Tan, co-CEO of Ping An Group,  said that Ping An Good Doctor was in Stage 3 where it was about to become profitable; and the CFO of Ping An Good Doctor Ye Lan made it more straightforward in a 2021 interim results announcement that "the company is expected to break even between FY 2024 and FY 2025." However, both of its most competitive domestic peers — Alibaba Health (0241:HK) and JD Health (6688:HK) — are already profitable.

From a relative standpoint, Ping An Good Doctor is undervalued compared to its domestic peers when P/S ratio is taken into account. At the moment, it has a P/S ratio of 3.2 times with a market cap of HKD 33.33 billion, while Alibaba Health and JD Health have a P/S ratio of 5.12 times and 7.55 times, respectively. This shows that Ping An Good Doctor has a larger upside potential as well as investment opportunities. 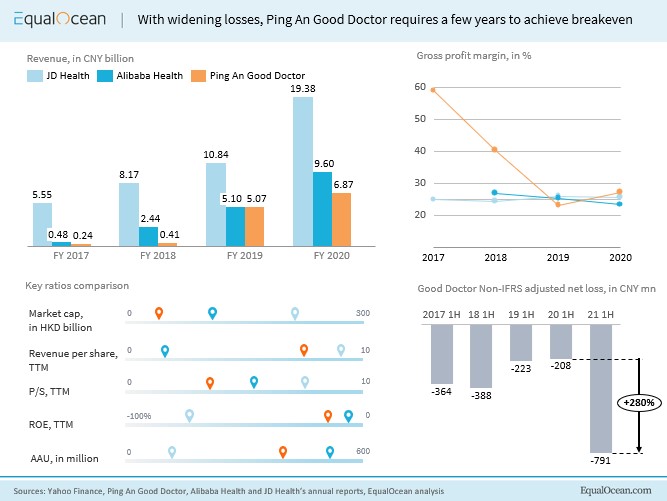 Check out our latest article about its competitors Alibaba Health and JD Health:

Alibaba and JD.com's Healthcare Units Prepare for Next Battle in Critical Industry

A force to be reckoned with

Ping An Good Doctor went public within just four years of its birth. Although this pales in comparison to JD Health, which only took four months of independent operation before it filed for a public offering, it still counts as a quick success. In addition to its vision of becoming an "Internet hospital" in its own right,  Ping An Good Doctor also has a close business relationship with its controlling shareholder, Ping An Group, and this played a dominant role in its nascent years.

According to the prospectus, the company has various types of transactions with Ping An Group. In 2015, 88% of its gross profit came from services or products provided to Ping An, with the revenue generated by the iconic family doctor service coming entirely from the Group's direct B2B procurement. A few other Ping An affiliates also contributed to Ping An Good Doctor's operations: Product and service transactions with Ping An-related parties (Ping An Bank, Ping An Annuity, Ping An Puhui Investment, etc.) totaled CNY 275 million, CNY 438 million and CNY 1.066 billion respectively during the first three years since Good Doctor was founded. In fact, this strong reliance on its parent — a leading insurance company — actually is one of its core competitiveness. 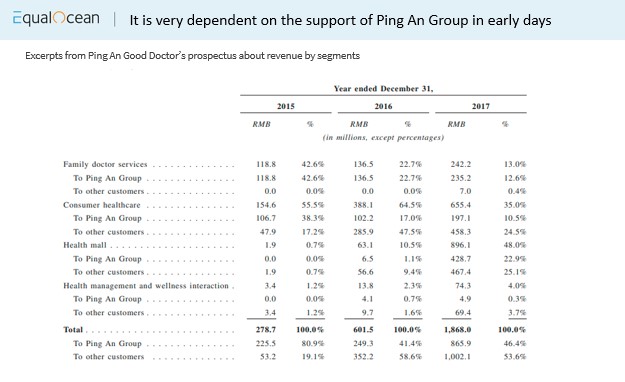 In addition, it also acquired a substantial number of users through collaboration with Ping An Group, and it seems that it will continue doing so. In its 2021 interim report, Ping An Good Doctor discloses that it has extended its focus on insurance channels including Ping An Life, Ping An Health, Ping An Property & Casualty and Ping An Annuity to integrated finance channels including Ping An Bank and Ping An Puhui. For example, life insurance policyholders can enjoy membership products of Ping An Good Doctor, including online consultation, appointment, inpatient arrangement, checkup and health management services; and users of Ping An Good Doctor could also be referred to integrated financial services in a cost-efficient manner. This kind of networking synergies enables Ping An Good Doctor to maximize cross-selling opportunities and improve the conversion rate for both channels.

Risks on the horizon

Some of the risks we believe Ping An Good Doctor is experiencing or will face are as follows.

− Path dependence. It has privileged access to corporate and individual users because of its parent Ping An Group; however, this over-dependence may, to some extent, undermine its motivation to improve its own operational capabilities.

− User number ceiling. Ping An Good Doctor's mid-term targets include quadrupling the total paying user base to 60 million. However, the rate of user growth is bound to reach a bottleneck as about three out of 10 Chinese have currently registered with the Good Doctor app, and it will not be easy to continue to expand the user base from there.

− Margin contraction and slowdown. It is what Good Doctor is facing for the latest interim, and we will see if its Strategic 2.0 Continuum could make any difference in the follow-up earnings reports.

− Policy issues. Concerns about the sector's growth outlook have been further fueled since the Chinese government released draft rules in November last year that tightened supervision on AI-assisted diagnosis and prescription of drugs, sending Good Doctor's stock prices tumbling. With a constantly shifting policy landscape, the short- to medium-term profitability of online healthcare could hang in the balance.

Online healthcare is a huge pie of which every player wants to jostle for a piece. To become a top partner for medical care providers and healthcare providers, Ping An Good Doctor has to address the above-mentioned or any other problems left uncovered in this article, to step up efforts in improving its O2O services. We will keep an eye on it to see what's in store for this emerging giant.

CONTACT US
Scan QR code to contact us for professional consulting services
Next article
A Hotheaded Fantasy or Winding Journey? The Hydrogen Economy in China's Car Market