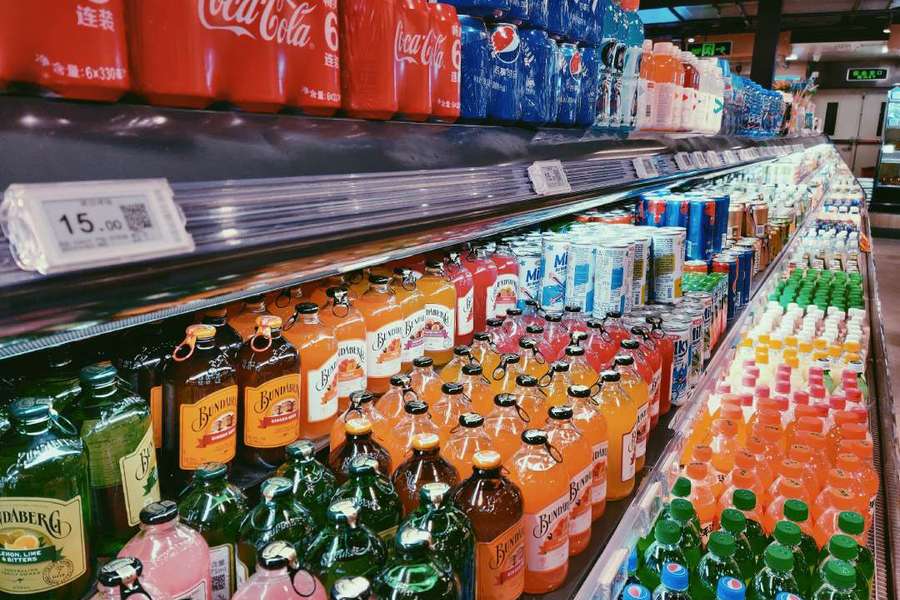 The global erythritol market size reached USD 225.6 million in 2019, according to LP Information, a market research firm. Frost & Sullivan, a business consulting firm, indicated that global production of this most popular sugar substitute jumped from 51,000 tons in 2017 to 85,000 tons in 2019, up 66.67%.

The growth of the sugar substitute industry in China has entered a fast lane after a decade of germination. According to Dongxing Securities, the market for China’s sugar-free drinks was worth CNY 9.87 billion (USD 1.56045 billion) in 2019, representing only 1.25% of soft drinks, and it expanded at a compound annual growth rate (CAGR) of 40% from 2014 to 2019 .

In comparison, sugar-free tea beverages make up 80% of all soft drinks in Japan. China’s current development in this space is comparable to the golden decade (1985-1995) of Japan’s diet drinks.

In July 2019, China’s National Health Commission introduced “The Healthy China Initiative (2019–2030),” which recommended that daily sugar intake for adults should not exceed 25 grams. A 2019 Nielsen  survey showed that 82% of Chinese consumers were willing to buy healthier drinks, a ratio higher than the global average of 68%.

According to  a white paper released at the first “China Beverage Healthy Consumption Forum” on September 3, 2021, China’s sugar-free beverage market will reach CNY 27.66 billion in 2027, with a double-digit annual growth rate.

But artificial sweeteners have been controversial since their invention. For example, aspartame, used in Coke Zero, may affect intestinal flora and cause glucose intolerance, according to the latest research.

The only natural sweetener on the market, erythritol is mainly produced through microbial fermentation with starchy raw materials such as wheat or corn. The high-quality substance resulting from this procedure has a pure taste, and is widely adopted in the food and pharmaceutical industries. However, “the cost is 50 times higher than Coke Zero’s aspartame,” said Tang Binsen, founder of the beverage giant Genki Forest, whose staple sugar substitute is erythritol.

Though the current global market size of erythritol is only  CNY 1.6 billion and its production  amounts to 6.4% of China’s sweetener market, erythritol has started to prosper as people’s focus shifts from cost to safety and flavor. During the Singles Day shopping festival of 2020, Genki Forest overtook Coca-Cola and Pepsi to top the sales list for carbonated drinks on e-commerce platforms Tmall and JD.com.

Sanyuan has the largest market share among all players across the world, and counts  Saraya, Genki Forest, Pepsi and Coca-Cola among its major clients. Data from Frost & Sullivan showed that Sanyuan’s erythritol production in 2019 accounted for 54.9% of domestic output and 32.94% of the global total. 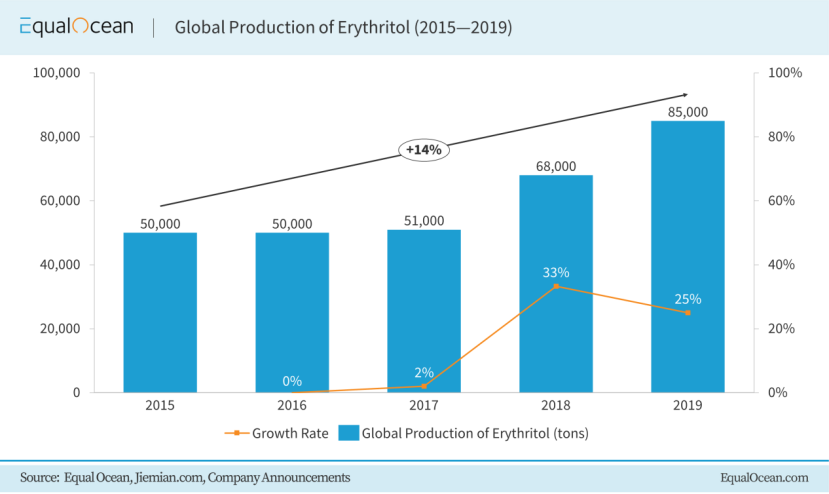 Shares of the world’s top erythritol supplier leaped 17.12% from its offer price of CNY 109.3 to CNY 128.01 apiece after it debuted on the Shenzhen ChiNext Market (also known as the GEM board). The company ended the first day of trading with a total market capitalization of CNY 17.27 billion on February 10. Sanyuan planned to use CNY 770 million from the IPO proceeds to produce 50,000 tons more of erythritol annually and build technology centers. The production capacity in the first half of 2021 reached 850,000 tons.

Baolingbao is the first company to begin industrial production of erythritol in China and is currently the only company manufacturing all kinds of multi-functional sweeteners. Erythritol accounted for only 11.37% and 13.54% of its total revenue in 2018 and 2019. The figure reached 20.54% in the first half of 2020. Its total revenue in the first half of 2021 hit CNY 1.262 billion, up 24.1% year on year. The company is projected to expand its erythritol production to 13,000 tons last year and 30,000 tons this year.

Zhejiang Huakang Pharmaceutical (605077) (Chinese: 华康药业) said in August last year that they had started a high-purity erythritol project with an annual production of 30,000 tons and will put it into production before May 2022. The company which makes and supplies crystal sugar alcohol products posted a revenue of CNY 832 million during the first nine months of 2021, on a scale similar to Sanyuan.

As more players jump on the bandwagon of the burgeoning sweetener business, the niche market will unavoidably face overcapacity, which will undermine the core competencies of current leaders. Frost & Sullivan predicted a global erythritol demand of 238,000 tons in 2024, while major producers in China have a capacity of 185,000 tons and this figure is forecasted to reach 445,000 tons in three to five years.

Prices of corn starch, the crucial raw material of erythritol, have remained steady. In recent years, its output has continued to grow, with 32.33 million tons produced in China in 2020, up 4.4%  over the previous year. Suppliers abound, but the industry is marked by concentration toward leaders like Xiwang Sugar (Chinese: 西王糖业) and Dacheng Sugar (03889) (Chinese: 大成糖业). As such, there are salient risks for raw material suppliers to have excessive bargaining power. Xiwang has been the biggest glucose supplier of Sanyuan from 2018 to 2020, though Sanyuan denied a significant dependence on the former. The CR5 of Sanyuan’s glucose providers hit 88.16%, 67.66%, and 76.53% in 2018, 2019, and 2020, according to its prospectus.

Despite a small market size , the demand for erythritol keeps growing. Take Sanyuan as an example. Genki Forest became its top client in 2021, in addition to other famous companies such as Nongfu Spring and Dali Foods. But many buyers placed small and only occasional orders. Though statistics from Sanyuan showed that the company has strong bargaining power, as clients such as Saraya has to pay 50% upfront for the products, Sanyuan’s clientele still is highly concentrated – the same issue as with its suppliers – with the top five clients, mostly foreign companies excluding Genki Forest, making up about half of its total revenue since 2018. Amid rising geopolitical tensions, Sanyuan’s exports could also be subject to curbs such as higher tariffs due to trade frictions.

Competition among erythritol manufacturers also looms along with an expansion in production  and the threat from new entrants. As a global giant, Sanyuan led the race, but its unusual gross margin – nearly 30 percentage points higher than Baolingbao’s in 2020 – also led to regulatory scrutiny.

According to media reports, in its reply to GEM Listing Committee’s inquiry, Sanyuan attributed the margin differences between the two companies to its source of energy power, the intensity of fixed asset investment, the industrial chain layout, and other reasons. But the initial feedback from the GEM board suggested it remained unconvinced.

The board required the company to disclose the relationship between erythritol production and its steam and electricity consumption. Sanyuan’s replies somehow created more problems than they solved, as the figures it provided about erythritol output relative to steam and power consumption didn’t seem to add up.

Meanwhile, Sanyuan controlled expenses tightly. In the first three quarters of 2021, the sales, administration, R&D expenses accounted for a meager 0.27%, 0.86%, and 3.72% of its overall spending.

Sanyuan isn’t known for innovation, at least judging by the number of patents. As of February 15, 2021, it has filed and secured only eight patents, while Baolingbao has 252 patents and Jinhe (Chinese: 金禾实业), another major sweetener producer, has 147 , public data from the National Intellectual Property Administration shows.

The lack of innovation could lead to risks for Sanyuan and other companies with an overemphasis on one substance, as the battle in the sugar alternative segment, which used to be between acesulfame and aspartame, looks likely to evolve into a competition between erythritol and sucralose.

Sucralose, also an artificial sweetener and said to be 600 times as sweet as sugar, has been used by food companies such as South Korea ’s Lingtea in its sugar-free drinks. Besides, though slightly bitter, stevioside, another new sugar substitute, could also be a strong competitor.

CONTACT US
Scan QR code to contact us for professional consulting services
Next article
CCRC In China: A Rosy Picture for a Silver Future, but Still a Greenhorn Venture