The Circle of Life for EVs

Modern practices are helping the EV sector to reduce even more carbon footprint throughout an EV's lifespan. 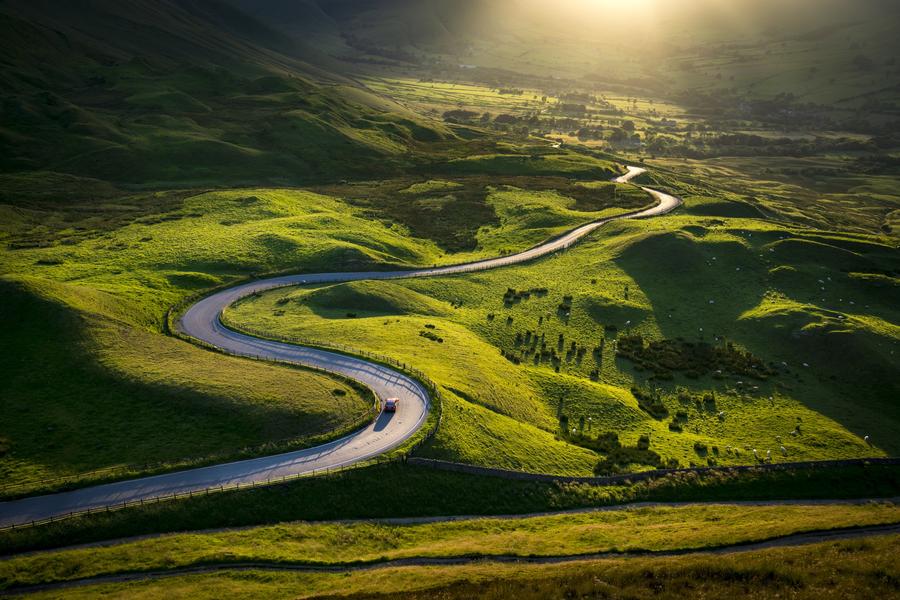 The transition of EV to being just 'V' is imminent. According to Reuters' analysis, the proposed US mining projects in 2022 could produce enough copper, Lithium, and Nickel to build over 8 million EVs. In China, experts expect that 40% of new cars sold will be new energy vehicles by 2030. The promise of EVs is attractive, reducing strain on the environment by eliminating carbon-heavy practices; however, when dissecting an EV from its birth to the end of life, it is evident that EVs, like their internal combustion engine (ICE) counterparts, have a considerable amount of carbon footprint. This article examines each stage of life of an EV and the respective environmental impact.

EVs emit far less carbon over their lifespan than gasoline vehicles do. However, the current manufacturing phase of EVs exceeds that of an ICE vehicle. A study found that ICE cars in China emit roughly 10.5 tonnes of carbon dioxide (tCO2) per car, slightly less than the 13 tonnes tCO2 of EVs during this phase. The extra materials needed to assemble an EV run up the carbon emission to 38% more on average than petrol or diesel. The impact of the manufacturing phase goes beyond carbon emission.

A vital component to the EV manufacture phase is mining. A couple of decades back, mining meant a small, subterranean project. Today, a new mine can quickly level a small hill or cut down a forest. However, the long-term effect of mining may outweigh the local ecosystem disruptions that it causes. The proposed mine of a UK mining company, Savannah Resources, could prevent the emission of 100m tonnes of carbon dioxide with the battery packs the mine will produce. Mining companies are also looking into a more sustainable mining approach. The set of 17 Sustainable Development Goals in 2015, signed by all members of the UN, has enabled mining companies to have improved relationships with local governments while engaging in more sustainable guidelines and practices. Continued investment and research in the mining sector will be crucial to enhance the positive impacts that the industry has and mitigate the negatives.

The operation, or use, phase is where EVs excel. Per findings by Transport & Environment, electric cars in the EU outperform diesel and gasoline cars in all scenarios. Even in countries with carbon-intensive grids like Poland and China, electric vehicles still prevail in their carbon emission over their lifetime. A medium-sized EU-average electric car emits approximately 90 gCO2e/km over its lifetime, while diesel and gasoline counterparts emit 234 gCO2e/km and 253 gCO2e/km, respectively. The disparity suggests that an EV in the EU emits around 2.7 times less CO2 than conventional cars. In the most carbon-intensive case scenario, a battery is produced in China, and the EV is later driven in Poland; the EV would still be 22% and 28% cleaner than diesel and gasoline counterparts, respectively. 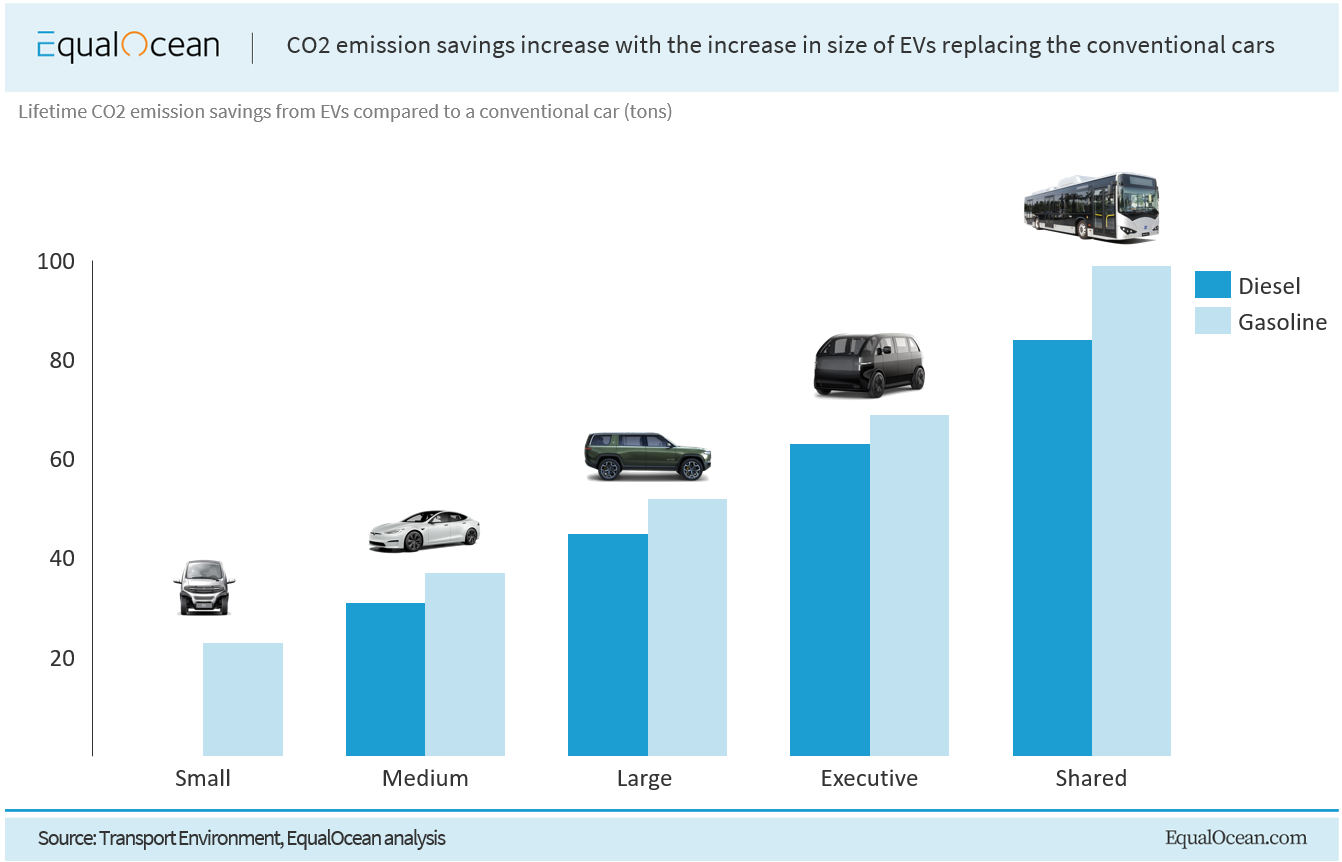 The larger the EV, the more carbon emission the vehicle would be able to displace. While a small EV displaces 24 tons of CO2, a large EV can displace 54 tons. (Graph) In the February webinar held by EqualOcean, the speakers discussed the potential of a future where ride-sharing and public transit will dominate the transportation sector. Electricity-enabled ride-sharing will be significantly beneficial to the climate. Car ownership may eventually be less appealing to consumers as electric buses and trains take the streets.

The most significant challenge of an EV when it reaches its final phase is battery recycling. The most used battery, lithium-ion battery, is problematic to recycle due to its reactive, flammable nature. The recent implementation of this battery also means minimal education for its recycling knowledge. The Biosystems and Agricultural Engineering Department of Michigan State University found that less than 5% of lithium-ion batteries are recycled. The lackluster effort in lithium-ion battery recycling is mainly because battery material alternatives, Cobalt and Nickel, are extremely toxic metals, whereas Lithium is not. As a result, many people prioritize recycling Cobalt and Nickle rather than Lithium. However, companies like Tesla are actively trying to solve the battery recycling issue. There are also people who have seized the demand for used EVs.

Carnex, a Canada-based car dealership, is helping the recycling endeavor through their business in extending the life of EVs. The company realizes the pain points of traditional car dealerships: opaque records, high fees, and inadequate service. In contrast, Carnex's website offers all the test results of their vehicles while providing excellent services with minimal costs. In addition, Carnex enables a broader point of market entry for customers, which helps to turn EV into 'V.' Jeremy Zhang, Co-Founder of Carnex, said during EqualOcean's webinar, " Over the years we have seen strong demands growing for EV, the product offers of automaker have increased. All kinds of brands are releasing EVs. The new technologies are changing our lives for the better. The price of new EVs is already cost-competitive. Used EV breaks down the barrier to ownership. The cost of ownership is much lower. Having a used EV option will increase EVs' adoption rate and make the transaction of EVs faster.'

There is no doubt that EVs are overall beneficial to the globe. And companies like Carnex are helping to accelerate the already rapid transition to a new form of fuel. Even though the industry still has several unsustainable practices in some segments of an EV's life, the outlook for EVs is now brighter than ever.