The solid-state LiDAR market is booming and Its growth has been extremely beneficial to the autonomous vehicle sector. 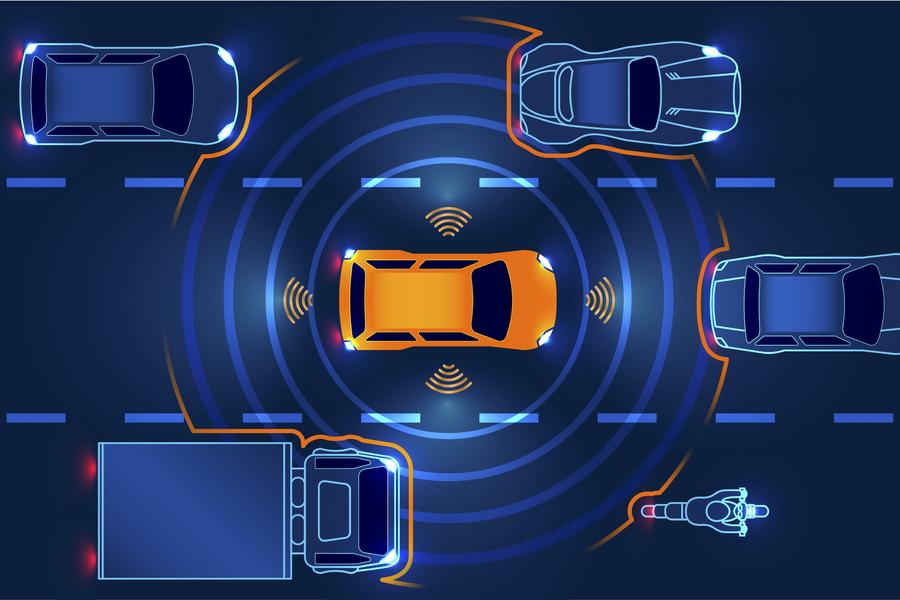 Will human drivers become obsolete in the future? The autonomous car market was valued at USD 22.22 billion in 2021. By 2027, the market is expected to reach USD 75.95 billion with a CAGR of 22.75%. Techs that enabled autonomous driving, as a result, flourished. The vehicles with self-driving capabilities predominately use light detection and ranging sensor (LiDAR), cameras, and radars. While cameras and radars are usually tied together, LiDAR is a standalone system. The LiDAR market was valued at 1.32 billion in 2018, and it is expected to reach USD 6.71 billion by 2026 with a CAGR of 22.7%. The versatile application of LiDARs, from seismic monitoring to astrophysics, has allowed immense growth in the sensors' development. Therefore, the innovations in LiDAR sensors will subsequently give a considerable boost to the autonomous driving industry.

The expanding market of solid-state LiDAR

The gaining popularity of solid-state LiDAR, which costs only a fraction of a mechanical LiDAR, indicates that the technology will be a pivotal player in the automation sector. Solid-state LiDAR sensors have come a long way from their large, spinning predecessors to the new sleek, concealed models. The sensor uses pulsed laser waves to create a highly accurate 3D map of the surrounding objects. Even if a vehicle doesn't have sensors, it can still use a LiDAR-generated map to boost its self-drive capacity.

A study featuring Innoviz, AEye, Inc., LedderTech, Valeo, and several other players in the industry suggests that the solid-state LiDAR market is expected to grow at a CAGR of 30.66%, reaching USD 1.62 billion in 2026 from the USD 325.14 million in 2020. Solid-state LiDAR sensors can apply to all levels of automated driving systems. Although the higher levels, L4 and L5, are taking longer to mature than expected, automakers are still looking to leverage solid-state LiDAR for lower levels of automation systems. Forbes predicted that the global sales of level 2 and 3 vehicles will be roughly around 100 million by 2030. Solid-state LiDAR enables a lower entry point for automakers considering automatizing their cars. In addition, the sensor will expedite the transition to EVs, which the majority of automation systems are installed on, and revolutionize the future of the automobiles sector. 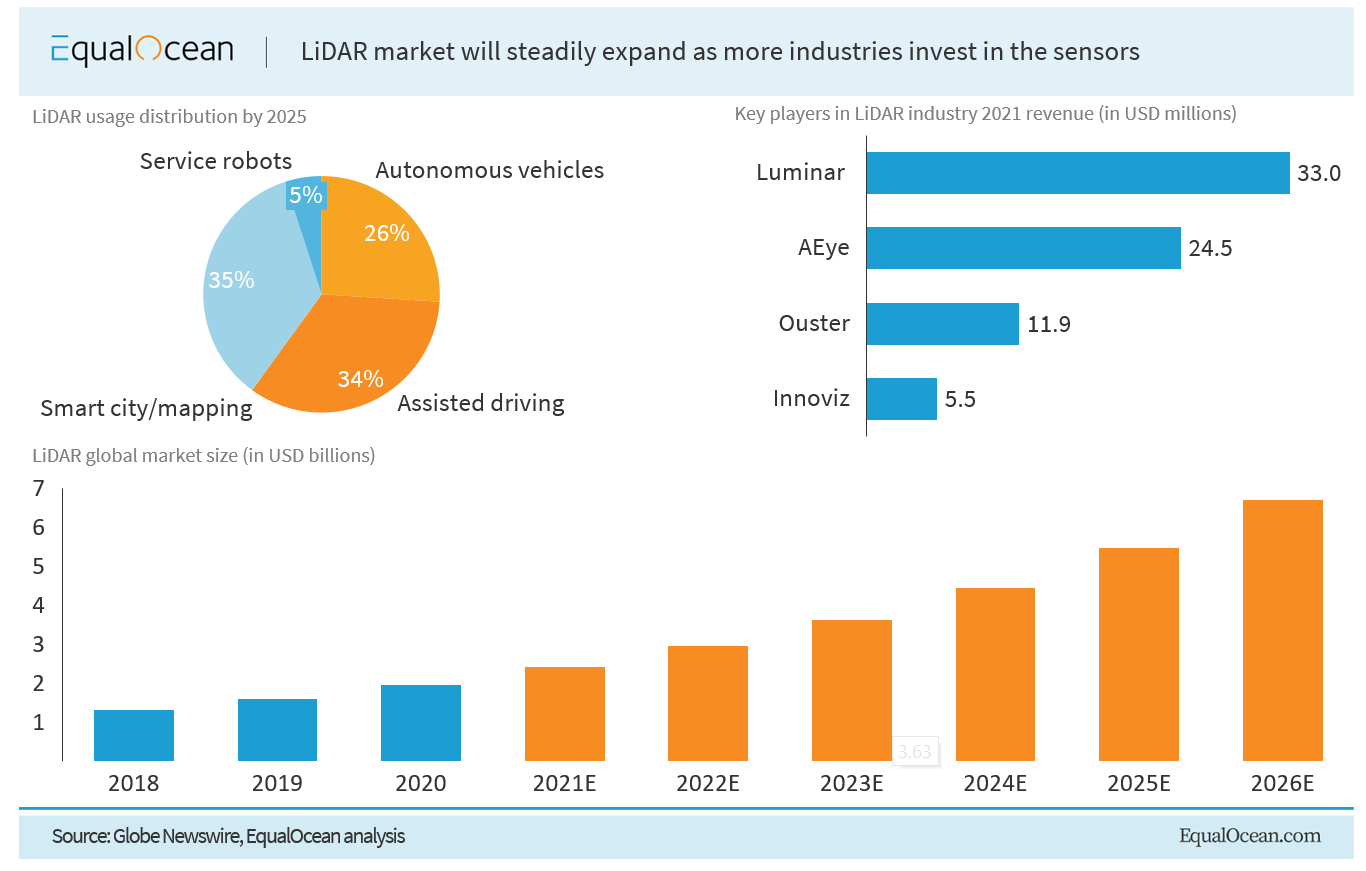 The debate between camera vs. LiDAR is coming to an end as innovations in LiDAR continually ameliorate the sensor's shortcomings. An optical camera's most significant advantage is the low cost. While a camera can cost a couple of hundreds of dollars, a LiDAR system on average adds upward of USD 10,000 to the price of a car. Tesla, a name synonymous with EVs, famously uses optical cameras with radars while most players in the industry use LiDAR systems. CEO of Tesla, Elon Musk, even calls LiDAR a "fool's errand." His belief that a car shouldn't need more than vision has led Tesla to become a misfit in the industry. However, despite Musk's derision towards the technology, Tesla reportedly tested Luminar's LiDAR sensors in March of 2021.

Safety is the first concern that arises when speaking of autonomous vehicles. Both LiDAR and optical camera have their limitations. LiDAR is susceptible to changes in weather conditions. For example, raindrops may reflect the laser emitted from a LiDAR to cause the system falsely identify the raindrop as an obstacle. The optical camera suffers from the same issue as typical driving weather. Fog, rain, snow can impact its visibility. Because optical cameras use visible light, they are even more susceptible to weather conditions than LiDAR. However, LiDAR's numerous applications have garnered interest from multiple industries.

Additionally, solid-state LiDAR can decrease the sensor's price by tenfold compared to its mechanical form, which solves one of the most significant barriers to installing LiDARs. LiDAR is also superior in judging an object's distance and requires less computing effort. But a camera can process more complex environments, while a LiDAR can only process spatial information. Both optical cameras and LiDARs have massive potential for the autonomous vehicle industry. While optical camera coupled with radar is good in general, LiDAR may be more suitable for higher levels of automation given its high accuracy.

Bright future for the LiDAR and the automobile sector

The accessibility of LiDARs is catching up to optical cameras as innovations like solid-state LiDAR continues. As a result, autonomous vehicles equipped with LiDARs will take over down the road if the development in optical cameras fails to match. With better accuracy in driving and distraction-proofed system, the number of human drivers will gradually decrease. IDTechEx believes autonomous vehicles will exceed or reach the same safety levels as human drivers in 2024. In the report, IDTechEx further states that having human drivers on public roads will be outlawed in 2050 as autonomous vehicles could meet the transport needs of the entire world. Despite the bold statement, the theory lies on the very real current development of self-drive innovations. With solid-state LiDAR's rapid growth and growing market, the automobile industry will continue to thrive in the coming years.