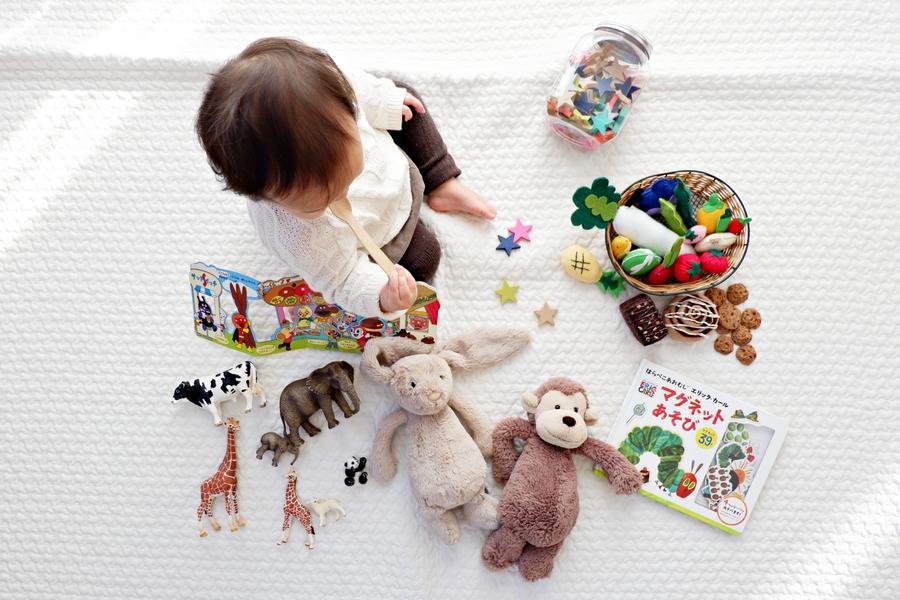 The baby food market in China rides on the wave of surging demand for mom & baby products and the food, both of which have started to lose their momentum. The baby food sector has become vital to category expansion amid increasing demands for niche products.

Baby food, including baby formula (0-36 months old), complementary food (6-36 months old), and children’s snacks (3-12 years old), according to Dietary Guidelines for Chinese Residents, a document pubished by the National Health Commission, is the core market of baby products. Frequently consumed and boasting loyal customers, baby food accounted for more than a third of all baby products, and the figure is expected to rise.

Meanwhile, its market growth has recovered since 2020, following consumption upgrade and demands for niche products. It fluctuated in 2017 as the number of China's newborns decreased year by year. In 2021, the market was valued at CNY 336.3 billion (USD 52.835 billion), and the figure is expected to exceed CNY 500 billion after China rolled out the three-child policy and, in due time, its supporting measures. 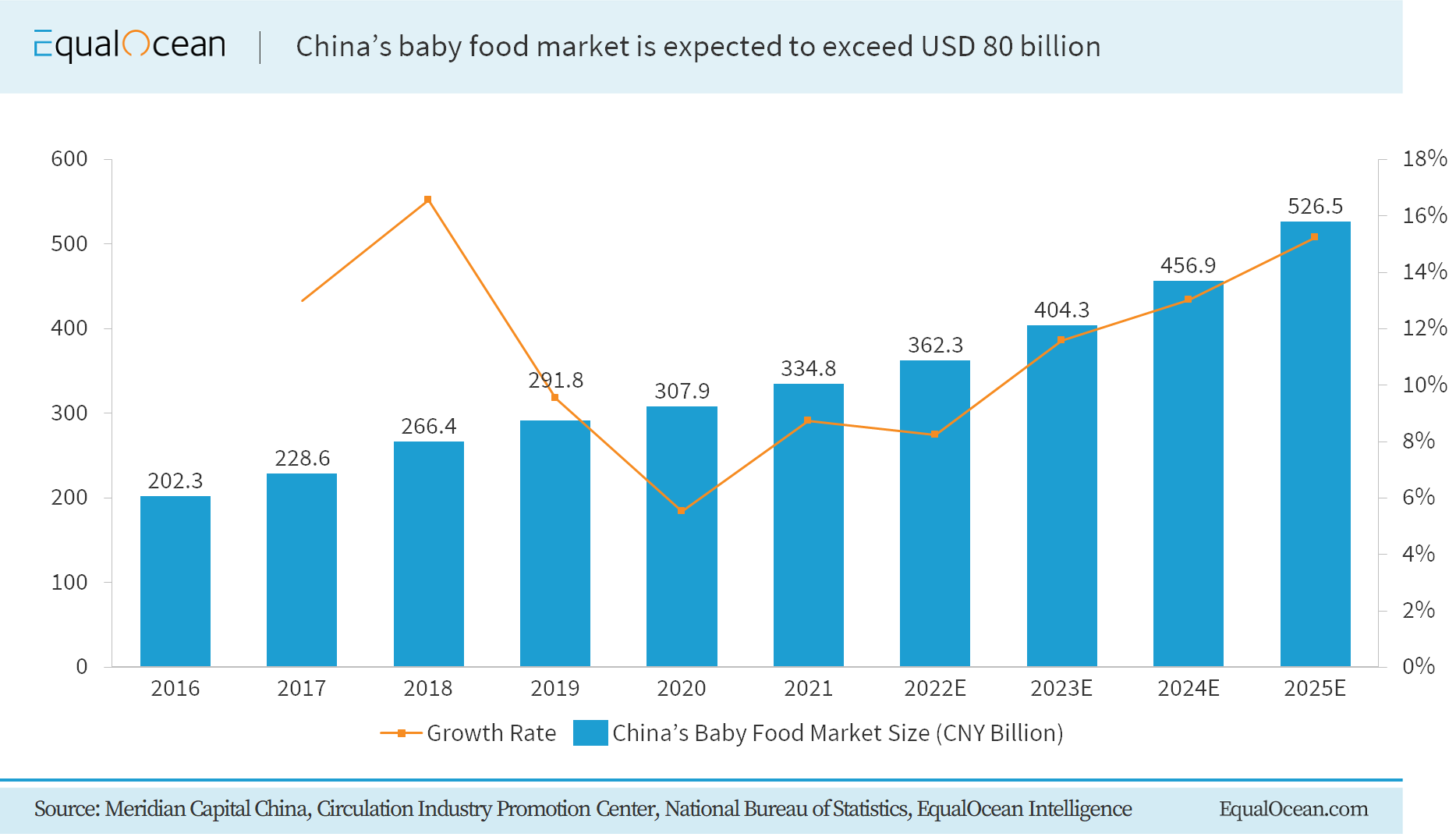 In view of the bright market prospects, domestic brands are eager to seize the chance. For a long time, foreign brands dominated the sector due to Chinese consumers' safety concerns over domestic products, but as the government tightened its regulation and new technologies and brands began to emerge, the market share of domestic players gradually increased.

China's baby food industry consists of baby formula, complementary food, and children’s snacks. Competition in the milk formula market has grown intense in 2021, as the reform of the registration system raised the entry threshold and the decrease of the birth rate cut the demand. As a result, the thriving and comparatively more profitable markets of infant supplementary food and children’s snacks attract more latecomers. 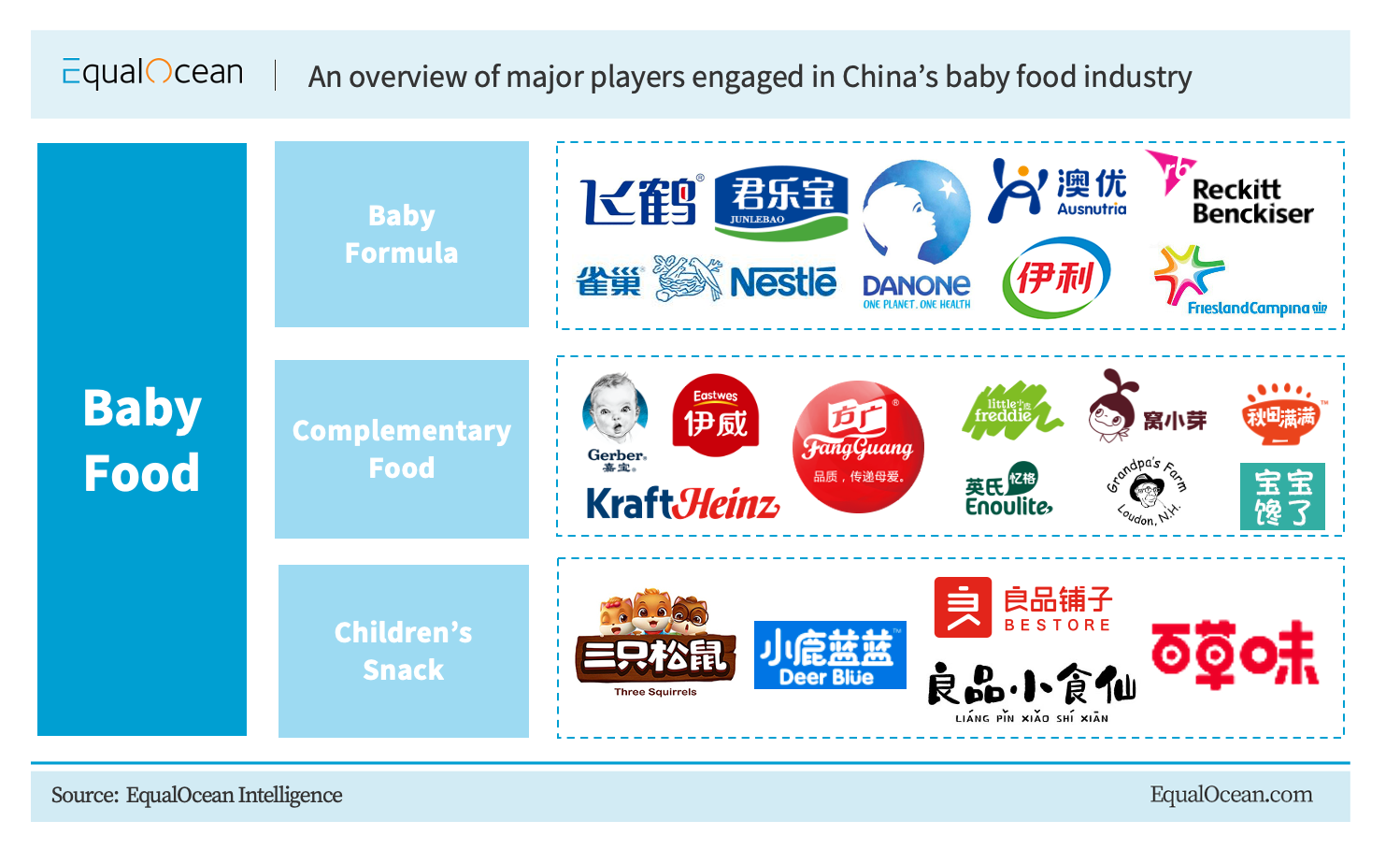 Chinese baby formula market size reached nearly CNY 130 billion in 2021. Its growth rate dropped from 25% in 2018 to 0.3 % in 2020 due to fewer newborn babies. In 2020, the market received a boost through an increase in the number of newborns and upgrading of industrial structure, and the market volume will rise to an estimated CNY 173.7 billion in 2025.

Data showed that the rising retail prices of domestic baby formula have fueled the increase in market share of high-end and ultra-high-end products. On the other hand, this upward tendency may not last, as the unit price of Chinese baby formula has exceeded the level in developed countries, including the US and Japan.

Some smaller markets like lamb milk replacer and medical formula have also witnessed growth. The expansion of the lamb milk formula market is remarkably faster than that of typical infant formula from 2016 to 2019.

Despite the decrease in newborn babies, the market size will grow beyond an estimated CNY 100 billion in 2025, with the cultivation of consumers' habits and government publicity.

According to their gross profit margin data, the complementary food market is more profitable than the infant formula market, indicating a lower entry threshold for new players.

Children’s snacks target 150 million 3- to 12-year-olds in China, with a market volume of nearly CNY 150 billion in 2021. The market size may rise to an estimated CNY 244.2 billion in 2025 with the consumers' improving perception of the industry.

Parents' focus on children's snacks has shifted to nutrition, emphasizing ingredients more than price or taste. In response to the demands, snack companies have attached more importance to the function of the products while expanding their market to a younger age group.

Snack giants possess supply chain and brand building strengths, making it hard for startups to challenge the existing players in the short term due to the severe homogeneity of the industry.

3. Risks and Potential in the Simmering Industry

The competency of the above aspects varies from firm to firm. Foreign and traditional baby food companies boast higher brand awareness, but they lack online channels and marketing methods. New brands are better at innovation and marketing, but they are inconspicuous and can't sustain the qualities of their products. In short, all companies still have space to grow.

Digitalization also offers more opportunities for the baby food market, as the industry shifts in ways of consumer interaction. Under the impact of the Covid-19 epidemic, baby food startups find it hard to acquire customers and start the preliminary digital exploration. This can help companies target potential consumers, transforming from the traditional interaction where "people seek products" to the pattern where "goods are presented to people." The efforts toward digitalization will effectively improve user numbers, enlarge the user life time value (LTV), and eventually promote overall growth.

This article contains only excerpts from the report. For more details, please click to download the full report here.