How Innovations in Channels, Scenarios are Driving China's Alcopop Market

As the alcoholic beverage market expands its reach to Gen Zers and women, channels play a bigger role for domestic brands. But on top of mulling where to sell their products, brands are fixated on the creation of new consumption scenarios encouraging young and price-sensitive drinkers to open their wallets 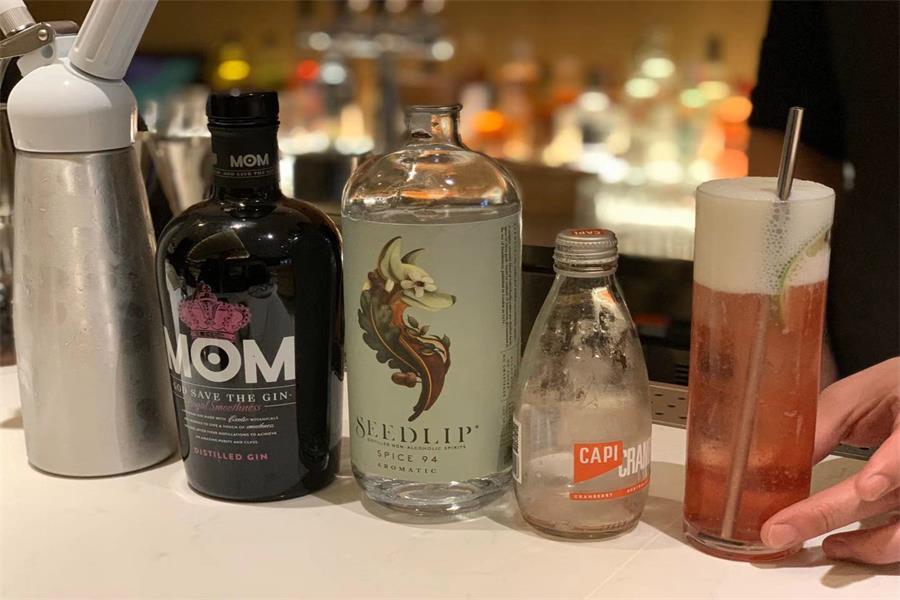 China's low-alcohol beverage industry, which recently became a darling of venture funds, has developed by leaps and bounds with the help of women and Gen Z consumers.

In the absence of a consensus on what constitutes low-alcohol beverage, this often refers to drinks with an alcohol by volume (ABV) of less than 20%. By 2023, China's low-alcohol drink market sales will reach CNY 43.9 billion (USD 6.643 billion), according to leadleo, an industry data provider. 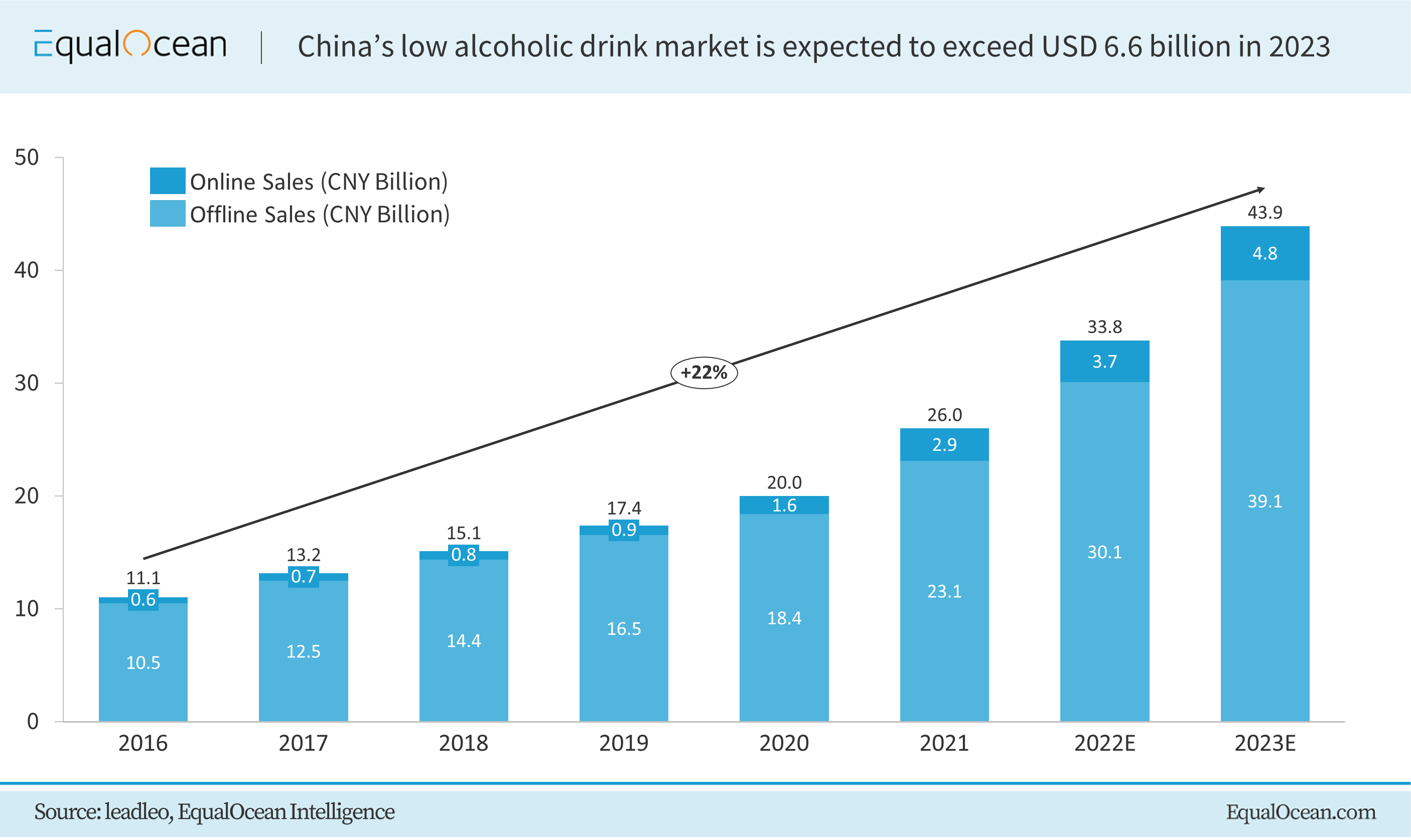 For the low-alcohol beverage industry, especially asset-light startups, which are more likely to opt for ODM and OEM models and face homogeneity, it's hard to create extraordinary flavors, and R&D can be costly.

Meanwhile, it's unlikely for startups to stand out through pricing without access to a robust supply chain, which most of them don't have.

Undoubtedly, targeted marketing can deliver impressive results, but consumers in this new segment are just as fickle as anywhere and haven't built or prefer not to build loyalty to any brand. More importantly, online sales is not the decisive growth driver, as is shown in the data above.

Therefore, those who control the channels, especially offline channels, and match them with clever marketing, might be the final winners.

In 2003, with the launch of RIO (Chinese:锐澳鸡尾酒) the Chinese low-alcohol beverage market took off. Foreign manufacturers also entered the Chinese market, including Bacardi, one of the largest family-owned spirits companies, and Japan's alcoholic and soft beverage giant Suntory.

The year 2018 saw a boom in the market after uncompetitive players were knocked out of the race. Since then, spurred by increasing investment and diversified platforms, niche products mushroomed.

However, the Covid-19 epidemic in 2020 hammered the low-alcohol beverage market, slashing offline retail sales amid sporadic surges. "This is a war-like reshuffle," said Shen Kai, founder of Dream Brewers (Chinese: 梦想酿造), which focuses on craft beer.

To survive and thrive, brands are in search of a "trump card" – channels that cater to targeted consumers despite the onslaught of the epidemic.

Consumer profiles and their drinking culture

China is home to about 400 million female consumers aged 20 to 60. The group annually spends about CNY 10 trillion, which is equivalent to the third-largest consumer market in the world.

Meanwhile, Generation Z has become the most populous cohort, accounting for 13% of the global population. China's Gen Zers have exceeded 270 million.

The two new forces – with relatively strong purchasing power – seem to go hand in hand with the expansion of the alcopop market.

According to leadleo, the primary consumers of low-alcohol drinks are young women in first- and second-tier cities. Over 70% of low-alcohol beverage drinkers are 18 to 34 years old. 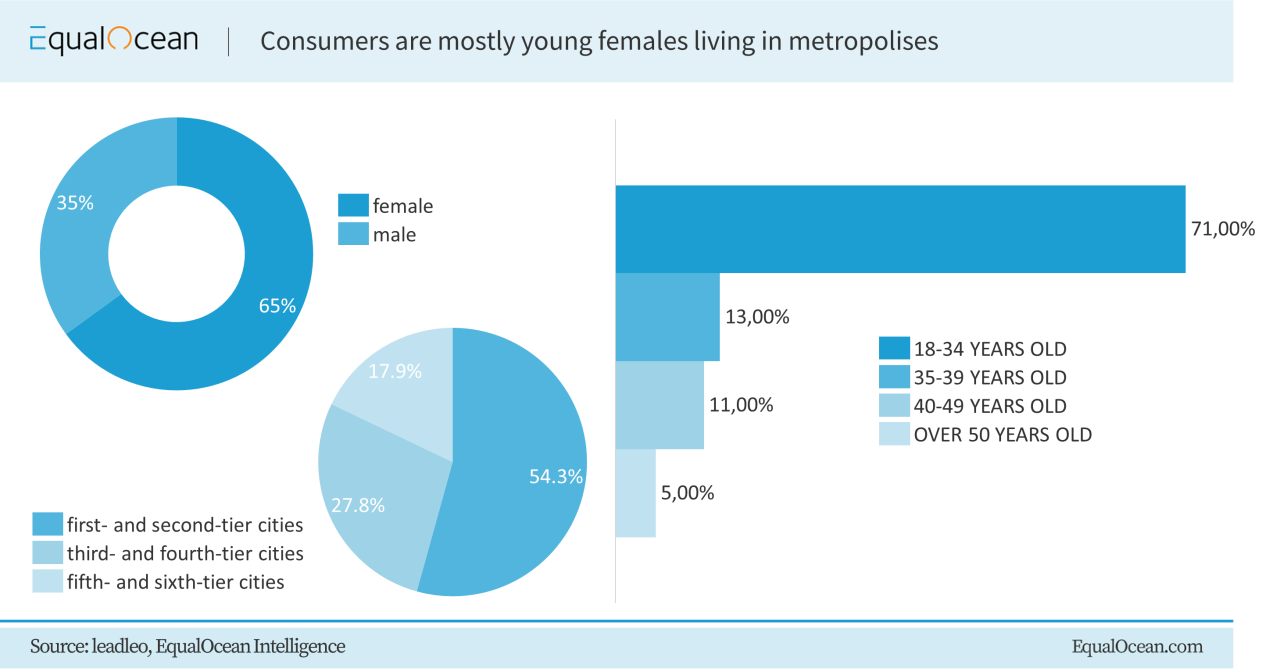 Consequently, companies making low-alcohol drinks place a premium on the new trend. For instance, MissBerry (Chinese: 贝瑞甜心), a Budweiser-backed alcohol producer that netted tens of millions of USD in Series A+ and B financing rounds last year, targets female consumers. Some startups, such as Dream Brewers and the wine maker Torre Oria (China) look to Gen Zers. Torre Oria (China) bagged hundreds of millions of CNY in Series A financing round last year.

Spurred by the demand of consumers, a new drinking culture thrives, one that is drastically distinct from the decades-old tradition represented by grain-based spirits. Spirits, in particular the fiery baijiu, often are overpriced and become a status symbol. Besides, they are drunk on occasions such as banquets and signify a set of elaborate rules about social hierarchy. What's more, baijiu, often over 80 proof, is never meant to be a party drink.

Many attributes of the Gen Zers and female consumers overlap. For example, they prefer designs, flavors, self-pleasure, individuality, lower prices, less emphasis on brands or types, among others.

Of all these commonalities, price, however, seems to be central to consumer choices, at least according to some veteran industry insiders.

The performance of Dream Brewers' offline stores, often teeming with young consumers, shows that pricing plays a vital role in sales. The beer in its Shanghai store is priced at CNY 30 (USD 4.577) per pint on average, and 800 pints can be sold a night. "If the beer is priced at CNY 60 per pint, the sales won't be so good," he said.

Flavor is also an important issue. "To make the flavor more new-drinker-friendly, we rid the grape skins and seeds when making wines, avoiding the sourness and bitterness," Zheng Junjie, chairman and founder of Torre Oria (China) (Chinese: 奥兰中国), said at a recent webinar on sparkling wine, for which EqualOcean's Chinese sister publication was a sponsor.

He also came to notice how consumers under 35 prefer to drink under certain scenarios, such as before bed, between female friends, and in front of so-called "On the Road Store," meaning drinking by the curbs.

Creating scenarios through self-owned offline stores or unconventional channels to attract consumers seems to be the trend in the market.

According to iiMedia, a market intelligence agency, the most common purchase channels for Chinese consumers of low alcoholic beverages are offline sales terminals and e-commerce platforms.

"Offline is the king," said Shen. "Chinese consumers are more likely to drink in particular scenarios, such as at parties, business banquets, karaoke bars, and over barbecues."

But competition in offline channels can be brutal. "Restaurant channels are bought to sell one brand exclusively," said Shen.

Thus, Dream Brewers chose to open its own stores. About 40% of its drinks are sold on premises and 30% through distributors.

Since restaurants are hard to break into, TasteRoom (Chinese: 忒斯特酿造), another brand focusing on craft beer that netted tens of millions of CNY in Series Pre-A financing round last year, added supermarkets, karaoke bars and other establishments to its list of retail channels, after starting with bars. About 80% of its sales is generated offline. "We won't limit ourselves to any channel," said Pan Guanming, founder of TasteRoom, at the aforementioned webinar.

On the Road Store (Chinese: 公路商店), a liquor store, also made full use of its offline channels. After finding that most young people can't socialize in their living room as they tend to rent apartments with others, the brand broadened the current drinking scenarios, which previously included only homes, bars, or restaurants, to involve drinking by the roadside. "Today's people need a place to chill off, quick, easy, and casual," said Yang Boyuan, co-founder of On the Road Store.

Lanzhou (Chinese: 兰舟), which netted tens of millions of CNY in its pre-A financing round last year, also found a new channel to lift its offline sales. Like On the Road, Lanzhou compensated for a lack of recreational space for the youth by pushing the boundaries of alcohol sales to an unlikely place: board game parlors. The brand ingeniously blends the popular murder mystery games (Chinese: 剧本杀) with alcoholic drinks, creating an environment for these two elements to come together to help generate sales.

Opportunities to expand channels amid the epidemic

The current surge of the epidemic hit offline businesses hard, but opportunities lurk.

Surprisingly, the downturn also gives startups a rare leverage in negotiation with mass offline channels such as supermarkets, which also fall on hard times due to the pandemic. Zheng of Torre Oria (China) said during the webinar that "Sam's Club is now being very friendly to startups."

"The biggest impact is not about losses," said Yang Boyuan, co-founder of On the Road Store. "The real damage is to the timeline, such as when to build new stores or start a sales drive, and the pace of marketing."

Nevertheless, many companies remain optimistic despite sales decreases. "We can work on other things, like R&D, consumer analytics and others during the epidemic," said Pan of TasteRoom. "Good alcoholic beverage brands take time and energies to build. Let's take it slow."