The Overview of the HUD Industry in China

This article focuses on China's front-mounted HUD market, and provides a comprehensive and objective analysis on the status of Chinese HUD market, as well as a forecast of China's HUD industry development. It helps people inside and outside the industry to understand the current situation of HUD function more directly. 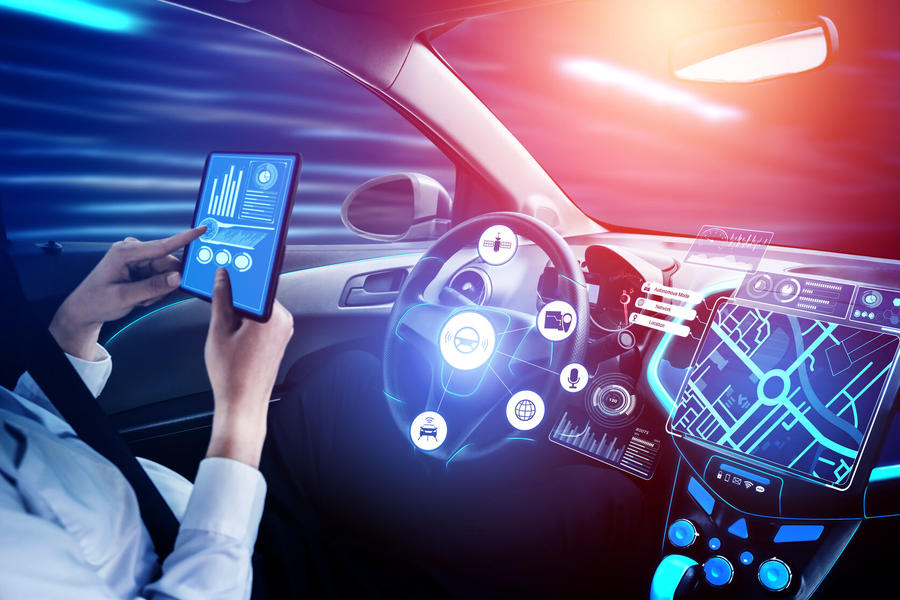 HUD is short for Heads Up Display, and is one of the most significant parts in human-computer interaction solutions. As an integrated electronic display device, HUD can project vehicle information, such as speed, fuel consumption, engine speed and navigation, onto the front windshield or other display media for drivers, thereby reducing the safety hazards caused by drivers drifting away.

After HUD’s three upgrades: Combiner HUD (C-HUD), Windshield HUD (W-HUD) and Augmented Reality HUD (AR-HUD), the image quality has been optimized, and the information loaded has been increased. At present, W-HUD is the mainstream in the market, while AR-HUD is close to mass production.

Market Status and Forecast of HUD

Under the background of the rapid development of automotive Human-Machine Interaction (HMI) system, policy, technology, cost and consumer drivers are accelerating the penetration rate of automotive HUD and driving the market to become more active. The function of HUD mainly covers the core auto information, external information, intelligent navigation, and entertainment, which is an important component for the vehicle to connect between intelligence and network.

As multi-information interaction provides a new driving experience for drivers, the HUD Market Penetration Rate (MPR) of newly released models achieved 34.3% in 2021, and there is still much room for development. In 2022, it’s predicted that HUD will embrace its golden days.

Dr. Yuanbo Deng, the CEO of Revis, analyzed that as demands for HUD rises stably, this demand is still dominated by W-HUD. With NEV getting more and more popular and car manufacturing threshold continuing to reduce, the intelligent cockpit has mattered a lot to the layout and competition of NEV, just as the power system to fuel car. 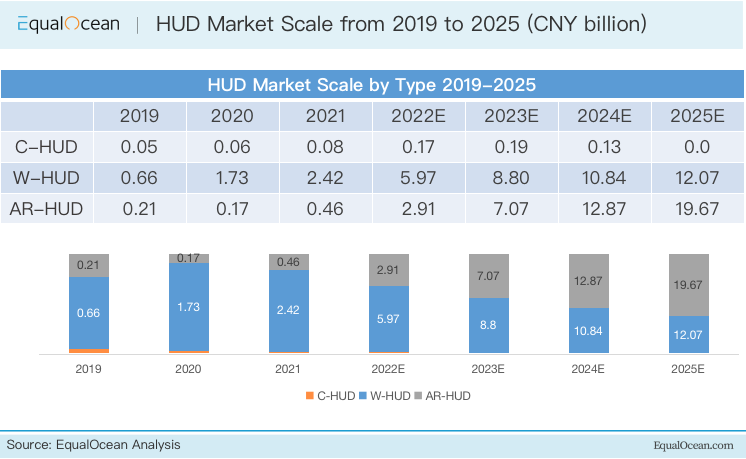 But currently the load rate of HUD in China is still low, with only 5.7% in 2021. As HUD enters its golden period, it’s expected that the load rate will reach 45% in 2025, with a CAGR of 71% from 2019 to 2025, and HUD will gradually become the standard equipment  China's intelligent networked vehicles.

Dr. Deng from ReaVis mentioned 3 reasons to explain the low load rate of HUD. First of all, the cost of loading HUD on NEVs remains siginificant for OEMs, sepecially for ARHUD. Second, although AR-HUD is attracting more attention and is belived to be the next generation HUD, its optical performance and AR effects are still not satisfactory at commercial level, which may impact consumers' driving experience. Third, some engineering issues have not yet been resolved, such as packaging volume and sun load , making it more difficult to be loaded on NEVs. 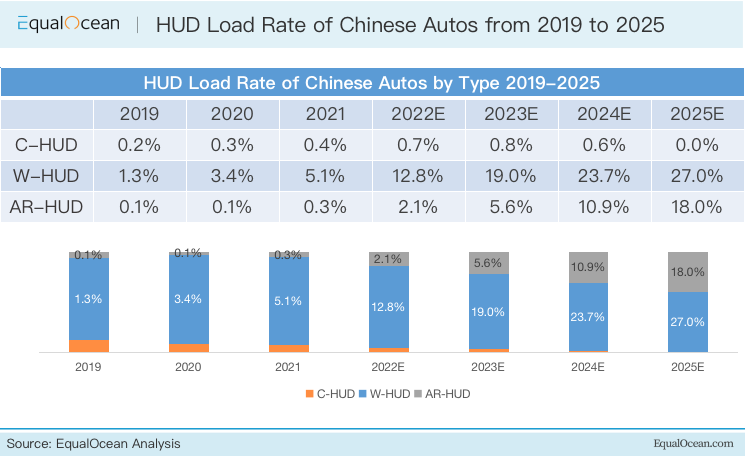 HUD is Loaded on Mid-range and High-end Models Mostly

According to EqualOcean, until 2022, 1,148 models have been equipped with HUD function among 2,552 models of 286 car series in China, among which the imported brand models enjoy the highest HUD installation volume. Among domestic brands, the number is 247,which has a lot of room for improvement. In the stage of upgrading from W-HUD to AR-HUD, the HUD installation of independent brands shows great potential.

“The reason why HUD equipped models of NEVs are mainly from imported brands is that HUD is still mainly loaded on mid-range to high-end models, while foreign brands position this section market and take more market shares,” said Mr. Shi Jinghua, the CEO from YesAR.

At present, HUD is mainly installed in mid-range and high-end models and the price of HUD-equipped models is mostly above CNY 250,000,among which the price ranging from CNY 250,000 to CNY 500,000 accounts for 38.1% with the number of 435 models. It's predicted that HUD is poised to be loaded on the models with a lower price ranging from 200,000 to 250,000 in the future, and those drivers will become the main demanding people.

As the technology of HUD becomes more mature, the average price of HUD is sure to drop. In 2022, the price of one single W-HUD is CNY 1,710 while the price of AR-HUD is higher, at CNY 5,058. It is expected that the price of W-HUD will drop to CNY 1,466 in 2025 and AR-HUD to CNY 3,585. Lower price is a favorable factor for mass production. As EqualOcean forecasts, in the future, AR-HUD will not only be the standard for high-priced models of OEMs but also be loaded on lower-priced models, pushing up the installation rate of AR-HUD.

At present, HUD suppliers mainly provide hardware and software integrated products to OEMs. Since the hardware needs to be adapted to different car models, the suppliers will cooperate deeply with OEMs to reach a high degree of customization. With the scale of AR-HUD expanding, it's believed that HUD software suppliers will adapt to multiple models and car series, and the standardization of software is the main trend.

It's the core direction for HUD suppliers to create differentiated products through software standardization and hardware customization. Some HUD companies try to integrate professional navigation technology and adopt a variety of core software algorithms and cutting-edge interaction designs, which gradually demonstrate differentiated advantages of HUD in navigation, intelligent driving system, UI design, body status and other functions. In addition, HUD suppliers are dedicated to creating a differentiated experience for different user groups through customization and adaptation to different hardware platforms.

Thanks to intelligent driving, AR-HUD function changes from safety assistance to life interaction

AR-HUD is not only a screen display system. AR can be integrated with various functions. In the field of automotive, AR can be combined with the navigation system, intelligent cockpit and intelligent driving, unleashing more possibilities for "AR+". With the development of car intelligence, more and more functions can be visualized by AR and shown in HUD.

According to Shi, the function of AR-HUD will develop into different directions as intelligent driving grows more maturely. When smart driving enters L2 stage, AR-HUD plays the role of safety assistance; When enters L3-L4 stage, the driver can give part of the "driving right" to the car, and the human-machine interaction through holographic with large FOV is much valuable in this case; When enters L5 stage, with the car completely driven by itself, the driver and passengers will focus on life entertainment and other aspects of the interactive experience with the solution of 3D holography. The AR-HUD has a large imaging to cover the driving lane to support ADAS, which provide a brand-new driving experience.

With the mass production of AR-HUD accelerating, parameters such as FOV and VID have become the core factors for competition among car companies and HUD suppliers. However, high parameters do not mean more advanced AR-HUD products and better user experience, because the user experience mainly lies in the imaging display and interaction experience of AR-HUD. So, the integration between virtual and reality is key to measure the technical ability of AR-HUD, and it shall be the main direction for AR-HUD suppliers and car companies to head.

At present, many technical problems of AR-HUD still need to be solved. As users' understanding of AR-HUD is slightly different, and vehicle manufacturers have not yet conducted in-depth analysis and research on users' driving behavior and driving habits, AR-HUD cannot bring good interactive experience to costumers. EqualOcean believes suppliers should focus on the technology of the virtual-reality combination and try to improve users' perception of AR-HUD. In conclusion, creating the ultimate interactive experience is the final goal for car companies and HUD suppliers.

As one of the most crucial parts of the NEV era of travel, HUD brings great value and imagination to the society and attracts a lot of top talents, and HUD has become one of the most discussed industry topics. People are always so longing for the future of smart travel that they sometimes overlook the difficulties in industrialization and feel frustrated with the short-term application effect. Contained by limits from technology, supply chain, policy and other challenges, HUD industry-related enterprises still have a long way to go.