This article analyzes the origin of DCUs, the driving forces, industry changes, and new opportunities for multiple players in the competitive landscape. Also, the article brings you unique insights from executives and industry experts in industry-leading and fast-growing companies regarding technological know-how and business modes in the DCU field, showing the current situation of China's autonomous driving domain controller industry development. 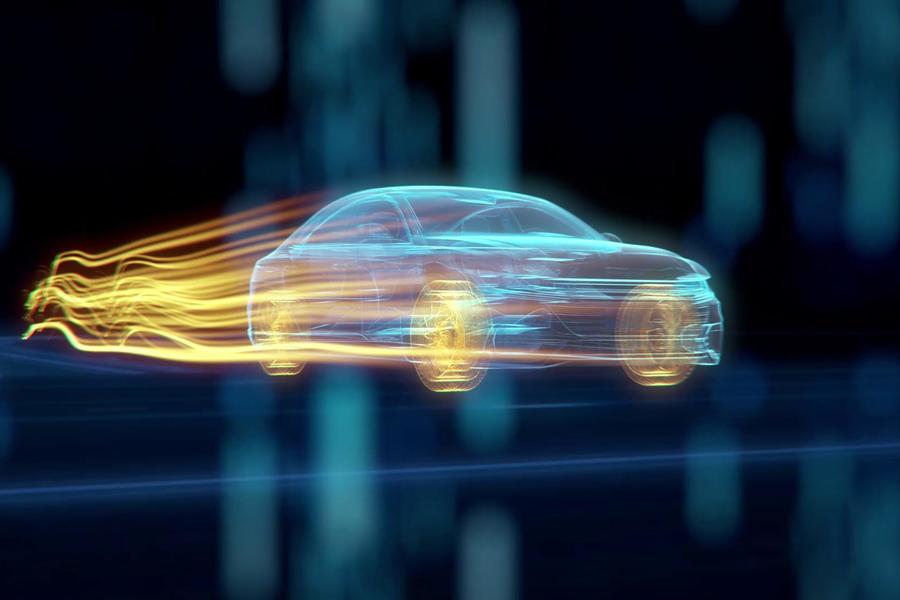 It is anticipated that self-driving cars can "see" with sensors, "think" with an autonomous driving domain controller (i.e., process information of the surroundings delivered by sensors), and make automated decisions on driving along the desired trajectory under route planning. Thus, we described the Domain Control Unit (DCU) of Automated Driving (AD)/Advanced Driving Assistance System (ADAS) as the computer brain of Self-Driving Vehicles' functional domain.

The centralization of E/E architecture brings significant benefits in the intelligence vehicle era.

The design of Electrical and Electronic Architecture (EE-Architecture) is experiencing a transformation from distributed architectures toward centralized ones, in which domain controllers act as a precursor. For traditional E/E-Architecture, each function of the vehicle is controlled by an independent Electronic Control Unit (ECU), which is called distributed centralized architecture. An evident limitation is that the number of needed ECUs would soar with higher data processing requirements and more complex functions required by vehicle intellectualization. Therefore, an optimized and integrated E/E-Architecture, called domain centralized architecture, has emerged due to domain centralization and fusion. This transformation makes a less-complex architecture, with a smaller size, more money-saving, higher flexibility, and ease of development. It is widely known that the Tesla Model 3 equipped with this DCU was a forerunner in this field when the company achieved mass production of its application in 2017. With the trend going toward further centralization, Vehicle-Computer-Zone ECUs and Vehicle-Cloud-Computing ECUs would become mainstream in the long run, according to Bosch's research on future E/E-Architecture. 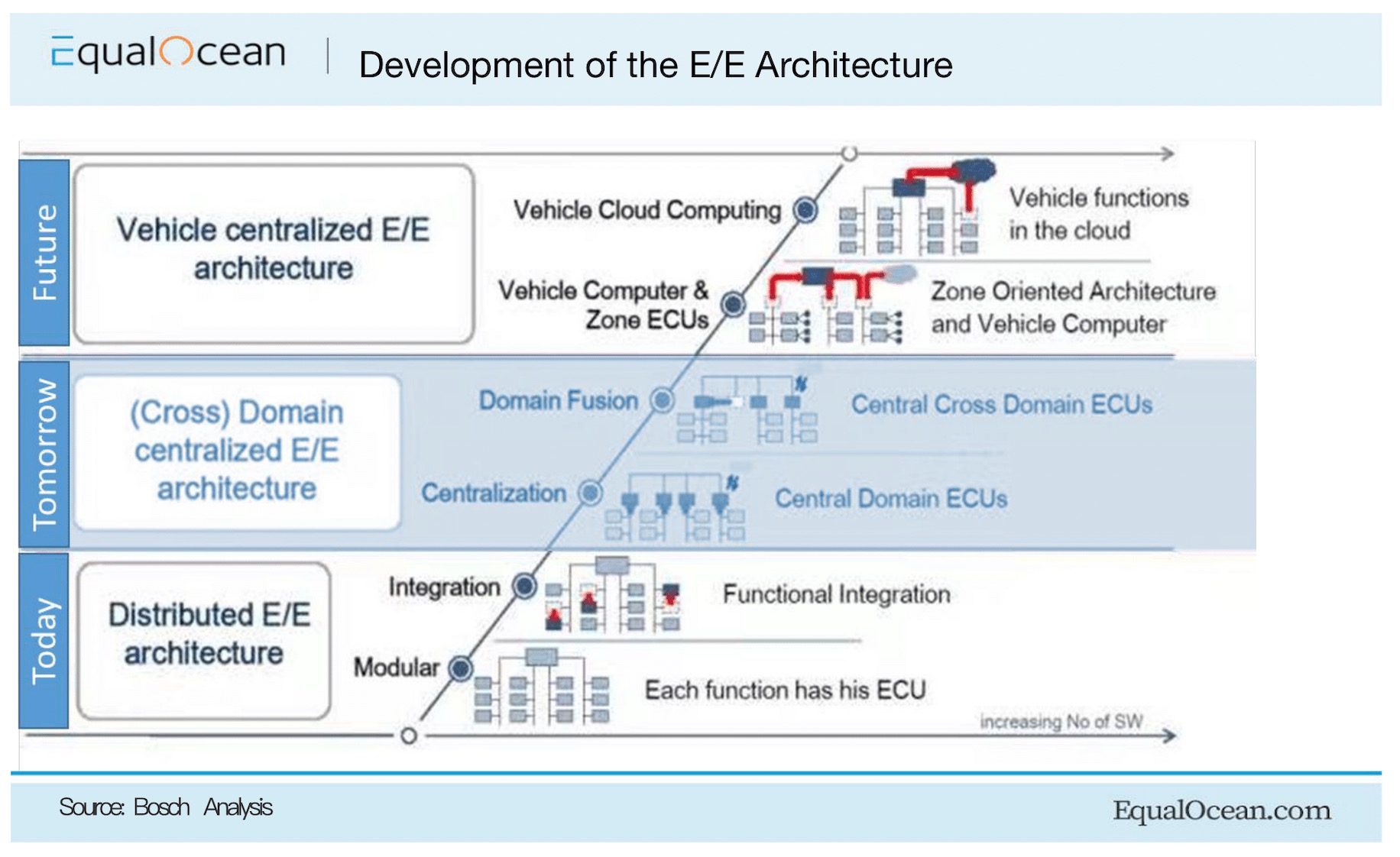 The R&D of ADAS/AD domain controller plays a vital role in the whole domain controllers' R&D landscape as it relates to the core issue of the self-driving field: driving safety. As a core computing unit of the driving functional domain, the ADAS/AD domain controller connecting sensors delivers status data through intelligent interfaces upwards; and then transmits relevant execution instructions through actuator interfaces downwards,  finally achieving latency-free information processing function of security-critical data with the main DCU and some sub-ECUs' assistance. 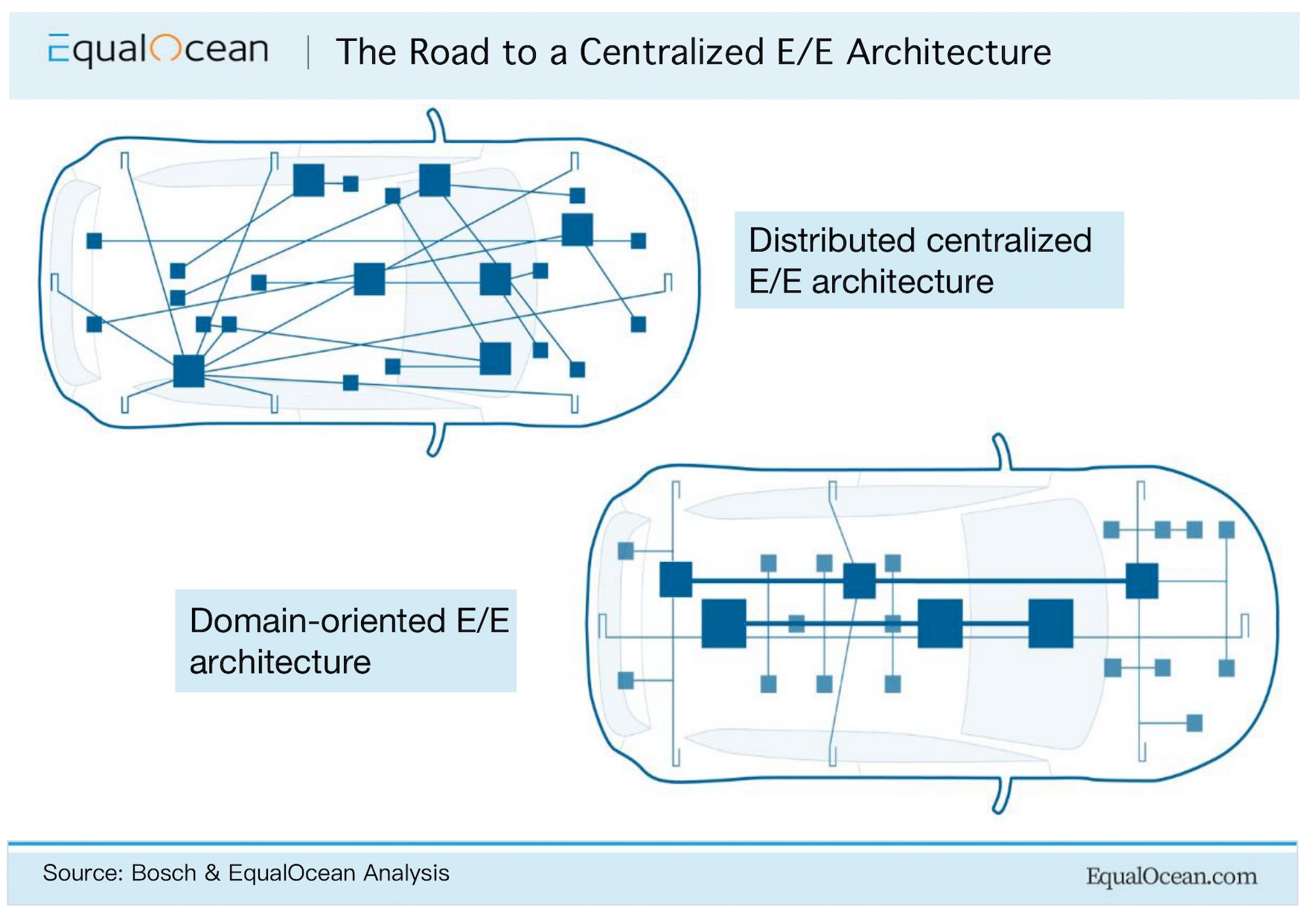 1. Hardware level: The main chip is the core in ADAS/AD domain controllers, especially in technological technique and cost.

The composition of the domain controller is mainly divided into hardware parts, which include the main control chip and other hardware carriers' components, and software parts, which refer to underlying base software, middleware, and upper layer application algorithms. At the hardware level, the main control chip is the core component of DCUs, with the structure being upgraded from a single MCU chip to a heterogeneous SOC one. Currently, the main control chip of the AD/ADAS domain controller with high computing power is generally composed of an MCU chip responsible for the control and a SOC chip which involves a CPU chip for calculation and a GPU for image processing. When selecting the main control chip, OEMs and suppliers would consider the vital processors' features, such as computing power, power consumption efficiency, ease of development, time for mass production, reliability, flexibility, prices, etc.

David Chang, CEO and founder of the Automated Driving startup Whale Dynamic (Chinese:惠尔智能) and expert in the L4 autonomous driving field, stated in an exclusive interview by EqualOcean that though chip costs occupy a significant part of domain controllers' BOM costs, especially in the higher AD level field. Performance, such as computing power and ease of development, rather than costs, should be prioritized in the R&D process. Therefore, Whale Dynamic adopt heterogeneous multi-core chips in their full-stack AD solution to achieve better performance.

In the past distributed centralized E/E architecture, software and hardware were highly coupled, which means the realization of software functions relied entirely on the hardware capability. Moreover, ECUs were developed by different vendors, leading to difficulties in OTA realization since developing a new process needs to change the established software architecture. While with the application of DCUs, there would be an evident change: decoupling hardware and software offers more flexibility in product development, which is also regarded as a necessary move in realizing automotive intellectualization and developing the intelligence net cars technology.

David Chang explained to EqualOcean that the prerequisite for "Software-defined vehicles" is the hardware capacities, which provide essential support for continuously upgraded auto intelligent functions. When designing the autonomous driving computing platform, Whale Dynamic mainly focuses on whether the fit between software and hardware can provide better adaptation to its products and whether the cost and integration can meet the expectations.

In terms of technology, though the current mass-produced passenger cars are at the L2 ADAS level and below in China, the OEMs still need to pre-set the hardware with enormous computing power. Because the subsequent software and algorithm upgradation should adapt to future higher AD level functions with developments of sensors.

For businesses, two industry experts have shared with EqualOcean their different views on product planning in various market segments interviews.

Dr Haowei Wang, Chief Architect and Product head of autonomous driving from JOYNEXT (Chinese:均联智行), accepted EqualOcean's exclusive interview. He mentioned that JOYNEXT has product planning in various series with different solutions to meet the functional requirements of different autonomous driving levels from OEMs. Based on the current technology maturity, he believed that the mid-end and low-end models (single vehicle price roughly from CNY100,000 to CNY150,000) are rarely equipped with mid-to-high-grade domain controllers. Therefore, this specific segment is still a vast blue ocean market. They estimated the penetration rate of domain controllers in mid-to-low-end models to increase significantly in the future, allowing JOYNEXT to be the first mover in the market segment in this field.

Dr Feilong Liu, CEO and founder of Hongjing Drive (Chinese:宏景智驾) and expert in the automotive industry, told EqualOcean that, on the one hand, the ADAS Controller for L2 is already a standardized product with the matured market, which means it will be easy for most OEMs to equip with the DCUs soon; on the other hand, OEMs nowadays strive for higher levels of ADAS/AD features mass-produced as quickly as possible, even with products haven't been standardized yet, to compete for the immature market segments.

The penetration rate of the ADAS L2 level is expected to reach around 25% in 2022E, which is still in the initial penetration stage of the industry. More specifically, the penetration rate of the domain controller market will soar in the next five years as the L3 and L4 AD level models will be equipped with domain controllers as standard, considering the future E/E architecture will continue to transform into the centralized architecture. 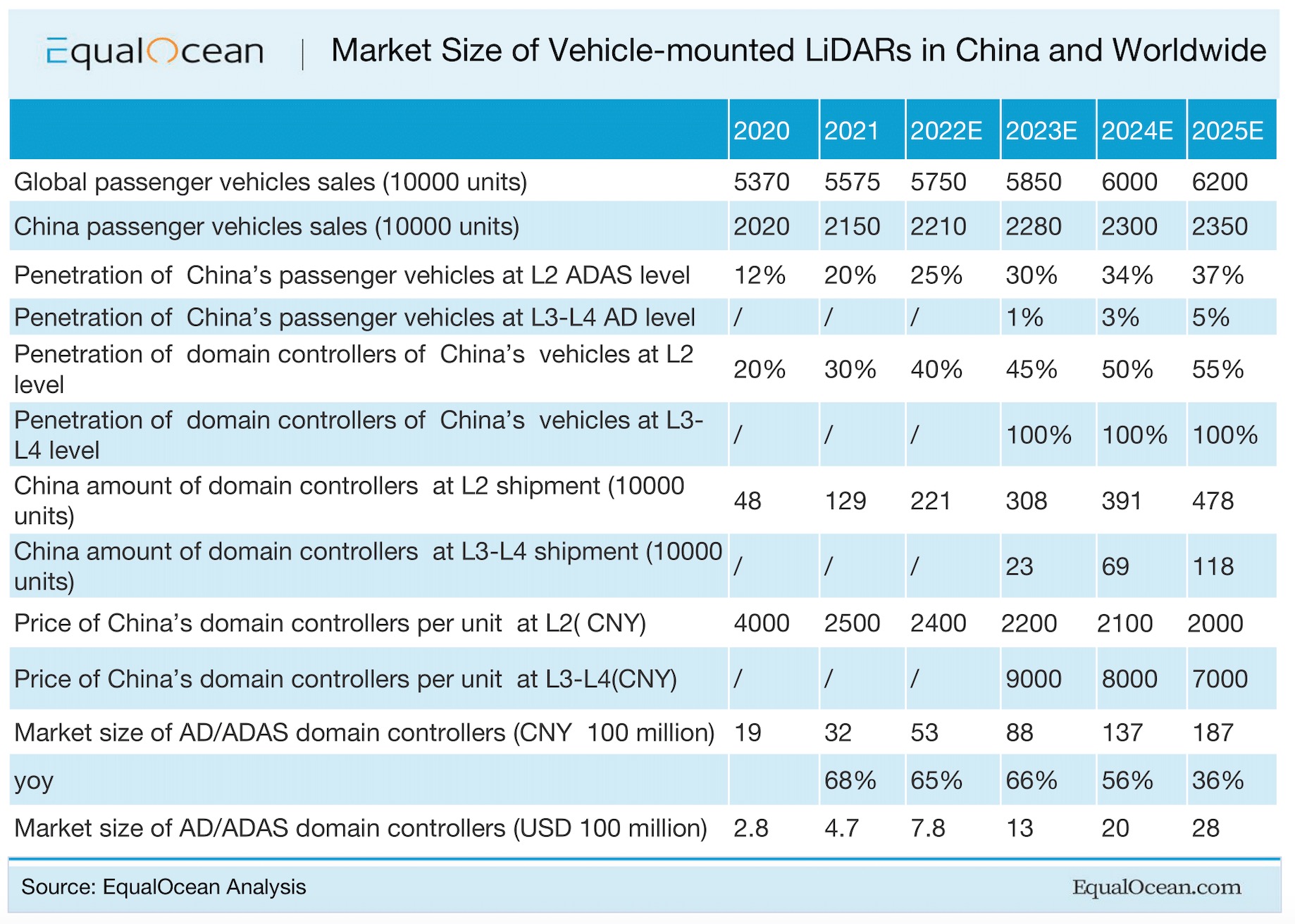 We estimate that by 2025, the annual shipments of ADAS and AD domain controllers for passenger cars in China will reach 5.96 million, while the price is influenced by the adoption of different chips and numbers of sensors. However, it will be further cut down due to mass production. Overall, the market size of China's domain controllers of AD/ADAS will grow at a CAGR of 58 % from 2020 to 2025E, which means a worth over CNY 18.7 billion (2.8 billion) by 2025E. 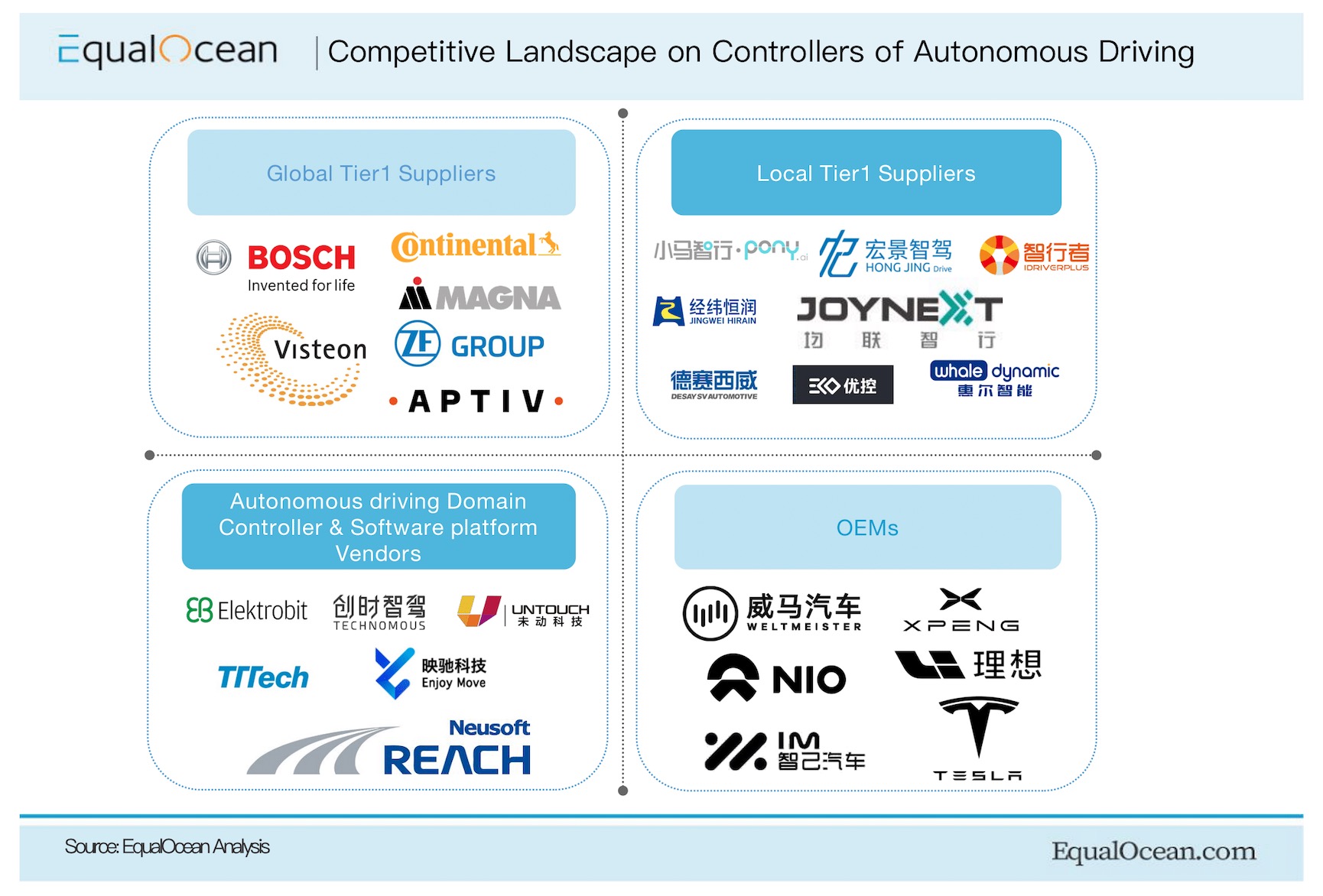 1. Tier 1 companies with full-stack R&D and mass production capabilities from hardware to software of AD/ADAS domain controllers are expected to take the lead in the competition.

Dr Wang emphasized that JOYNEXT focuses on developing domain controllers at the L2++ and L4 levels of Autonomous driving, and the development of standardized middleware is another focus in their product plans.

Dr Liu told EqualOcean that with the know-how from hardware to software, Hongjing Drive, a local Tier 1 company, has developed a comprehensive range of domain controllers at L2+, L3, and L4 levels, as well as software systems that would support high-level autonomous driving. The company has three evident strengths in the commercial field, allowing it to achieve a high shipment of ADAS Domain controllers. First, its self-developed capacities on software and hardware are the reason for the increasingly improved mass production efficiency; second, the full-range and multi-variety products offer more choices for OEMs; third, it has technological advantages that could fasten the mass production speed of products with more advanced ADAS/AD features.

2. Some OEMs have started developing the AD/ADAS domain controllers to strengthen the core know-how control in autonomous driving.

A few intelligence-oriented OEMs are speeding up their self-developing process of the domain controllers, including Chinese EV Makers NIO, Li Auto and XPeng, who are expected to acquire essential know-how in the automotive industry as they seek to upgrade their upper-layer algorithms with the help of direct access to consumers' driving data. But still, most other OEMs haven't invested in self-developed domain controllers, and they primarily rely on Tier 1 companies for supplies.

David Chang emphasized that cooperating with advanced chip companies and industrial-leading sensor suppliers is crucial for providing high levels of AD/ADAS solutions. However, OEMs usually focus more on the cost and stability of vehicles as they are customer-oriented, a reality that may pose a challenge in the R&D of domain controllers.

CONTACT US
Scan QR code to contact us for professional consulting services
Next article
WIM 2022: Transcript of Opening Keynote: The State of U.S-China Relations Today [2/2]