The popular online UGC entertainment platform achieved a revenue increase of only 9% yearly while there's no clue that the company will downturn the loss. 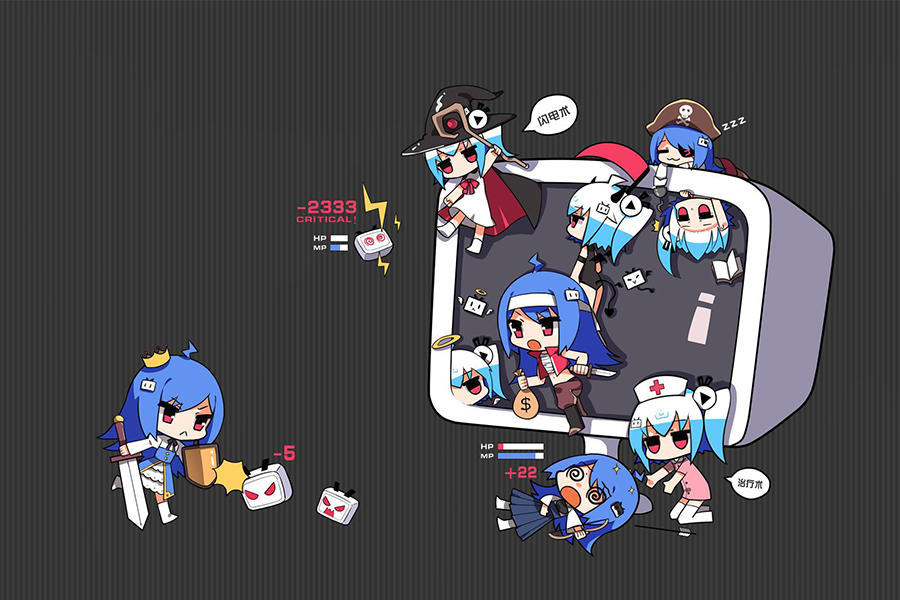 On September 8, 2022, Bilibili (BILI: NASDAQ, 9626: HK), the popular online UGC entertainment platform known as the Chinese YouTube, released its financial performance for the second quarter of this year and reported weak revenue growth and notifying higher cost. Even though its net loss narrowed from last quarter and monthly active users (MAUs) reached the historical high, Bilibili's stock prices plummeted more than 15% on both the NASDAQ and HKEX after the result was released.

We saw an apparent disconnect between its user base growth and revenue. According to the newly released result, Bilibili achieved revenue of USD 732.9 million (CNY 4.9 billion), increasing only 9% year over year, compared with 72% in the same period in 2021. It is also the first time its growth has shrunk to one digit since being listed in 2018. However, its average monthly active users (MAUs) reached 305.7 million, up 29% year over year, smashing through the 300-million-barrier successfully. Meanwhile, its average daily active users (DAUs) surged 33% yearly to 83.5 million, and average monthly paying users (MPUs) increased to 27.5 million, up 32%. The DAU/MAU ratio raised to 27.3% but hasn't returned to the levels from last year. Daily average time spent was 89 minutes, up 11% year over year. 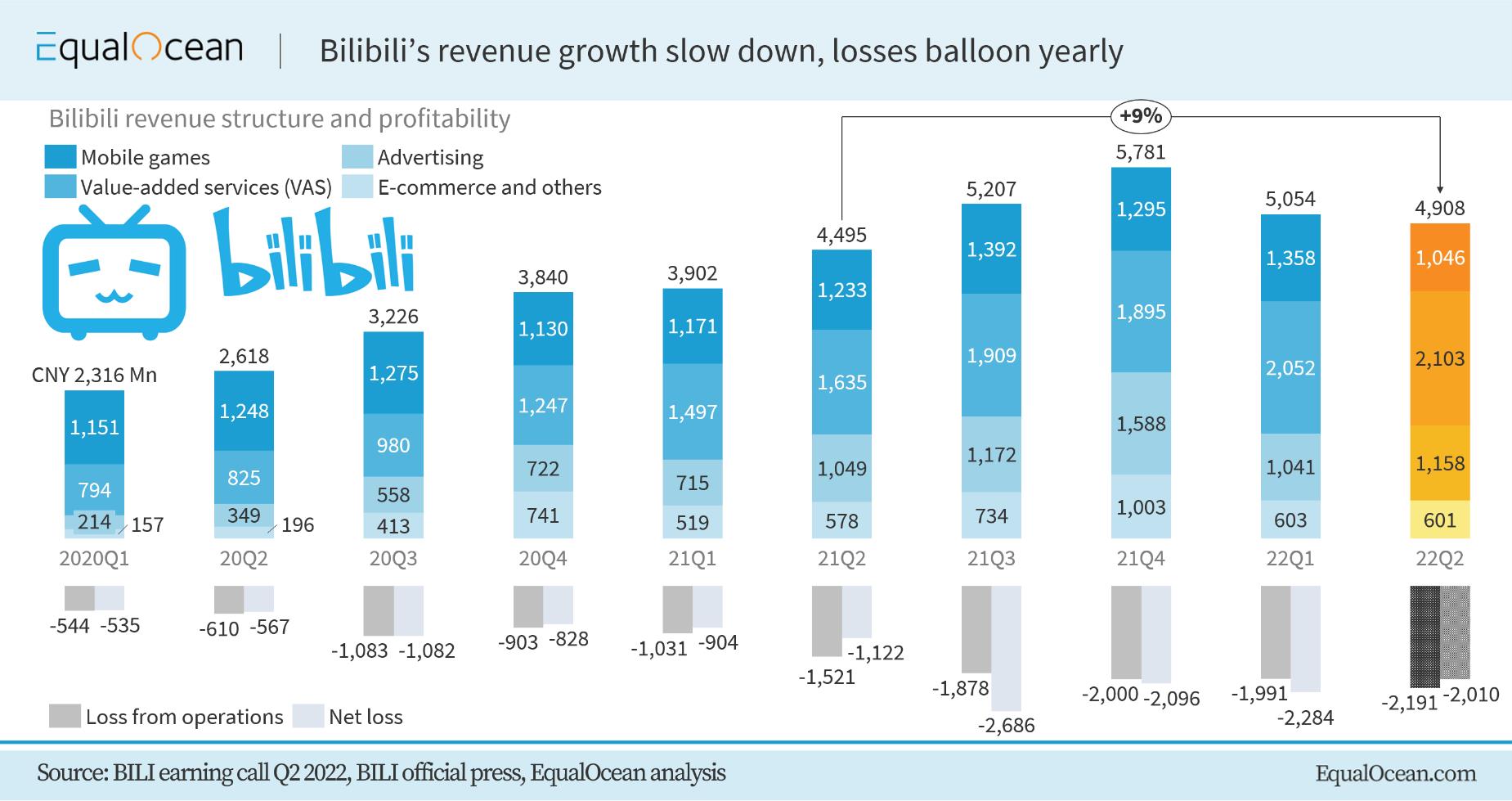 No one could deny that the most concerning thing about the report is its spiraling cost. In Q2 2022, Bilibili's operating costs climbed to USD 606.3 million (CNY 4.2 billion), up by 19%, twice the growth of revenue, 40% of which is attributed to increased revenue sharing to the content generators, the core asset of Bilibili. From the perspective of gross profit, although the revenue increased yearly, the gross profit and gross margin decreased dramatically. At the same time, various marketing and R&D expenses increased by CNY 400 million. Though the company's net loss narrowed by 17% to USD 300.2 from last quarter, the figure expanded by 79% over the same period of 2021 million, indicating weak controlling power of its losses. We believe that the company is getting further and further away from the goal set by the management team of turning losses into profits in 2024. 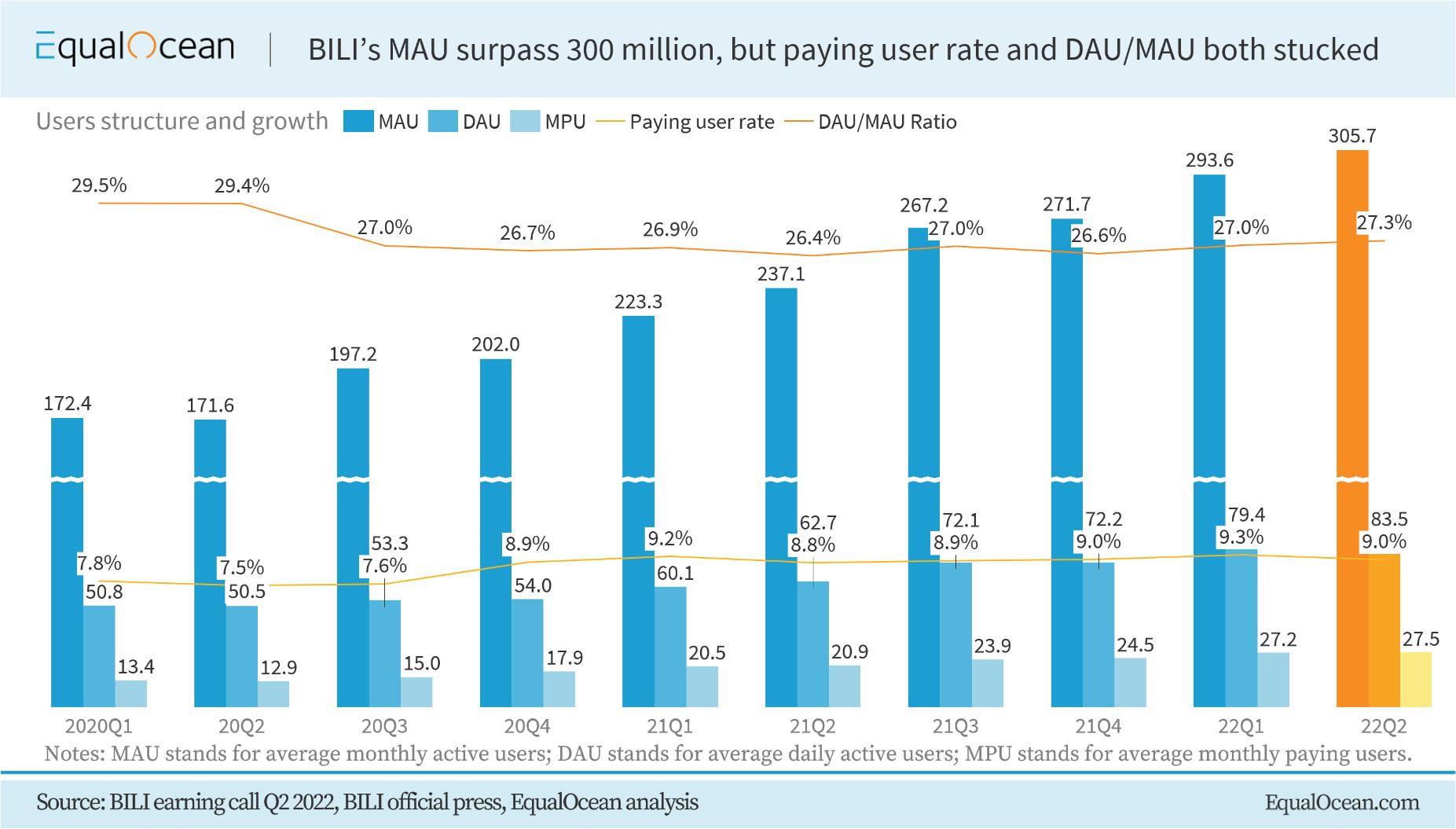 Critical bottleneck for all segments

Then from the perspective of a segment, despite successfully optimizing the revenue structure in the past four years, the company seems to be struggling to maintain high growth for all segments. The revenue from its mobile gaming business revenues reported USD 156.2 million, down 15% compared with the second quarter of 2021, which is mainly attributed to a "lack of popular new exclusively distributed game releases by the company itself during earning calls. Today, the revenue share of this business has dropped to 21%, compared with 83.4% at the time of listing. It can be considered that BILIBILI has realized income diversification. However, we should also see that the mobile gaming business of Station B still relies on popular games such as Fate/Brand Order, Re: Dive and Azur Lane to generate revenue. In the second quarter, the income from self-developed games accounted for only 5% of the total game revenue (mainly from Ark Order). It seems that the company needs to balance the cost of game R&D and income, which also determines whether the 'Tencent mode acquisition model is still suitable.

Advertising also shows unsatisfied yearly growth, even though the company considers it a praiseworthy point. The platform introduced a new TikTok-like story mode last year to increase advertising income and video views, and the daily pictures of the method increased significantly (four times year over year). However, it didn't effectively increase advertising revenue and resulted in dissatisfaction among long-existing users. E-commerce and other business contribute about 12% of the total revenue, up only 4% yearly. We believe that Bilibili's e-commerce business has natural limitations, mainly due to the relatively small number of product categories (ACGN), which makes it difficult to compete with eCommerce giants including Alibaba, JD, Pinduoduo or black horses such as dithering and a quick hand. However, since ACGN commodities, such as card games and hand-operated products, are primarily traded in the secondary market, establishing a standardized ACGN exchange may be a way out.

The most eye-brightening segment in Q2 2022, value-added services (VAS), reported a revenue of USD 314.0 million, jumping 29% from the same period of 2021. Notably, the company's live broadcasting conversion rate remained strong in the second quarter, with the number of active live broadcasters increasing by 107% year-over-year over the second quarter and NPUs for live broadcasting increased by nearly 70% year over year. However, we think Bilibili should rethink the differentiation of services between paid users (premium members) and non-paid users, which we believe could be the key to a continuous growing mode. At the same time, Bilibili should also take care of the censorship risk behind the core animation-subscribe business.

We could clearly see a bottleneck in the company's financials and strategy based on the segment analysis. This begs questions: Is it the darkest hour of the company or just a cage match? Where should it head for?

Though challenging, there's a strategy to help the company from the trying situation: Cutting costs in the short term and developing innovative pre-roll ads to generate revenue for a long time.

Both iQIYI and Kuaishou are turning a profit in the same quarter by reducing costs and increasing efficiency, while BILIBILI still sticks to an aggressively expanding mode. As CEO of Bilibili, Chen Rui emphasizes that growth is the most important priority within the Bilibili community, and it is still targeting 400 million MAU by the end of 2023. This belief is so common in the 2010s among Chinese internet companies. But now the business environment has changed, and more and more companies are aiming at sustainability, an extensive growth mode may become a potential risk to the whole company.

Bilibili has realized the importance of reducing costs, and its primary approach is to lay off employees. However, it is worth noting that layoffs may make the report look healthier for one to two quarters, but there is no way to solve the problem completely. As for long-term solutions, we believe that rethinking pre-roll ads are the only way to break through.

CONTACT US
Scan QR code to contact us for professional consulting services
Next article
The Next Crossroad of SaaS: Vertical or Horizontal?