Editor's note: We at EqualOcean tracked the major funding rounds or industry events that took place in China's new consumption space in September 2022. And the following is a list of deals that we have selected for you, based on a number of criteria including the funding amount, the financial backers, and the segments in which the companies operate. 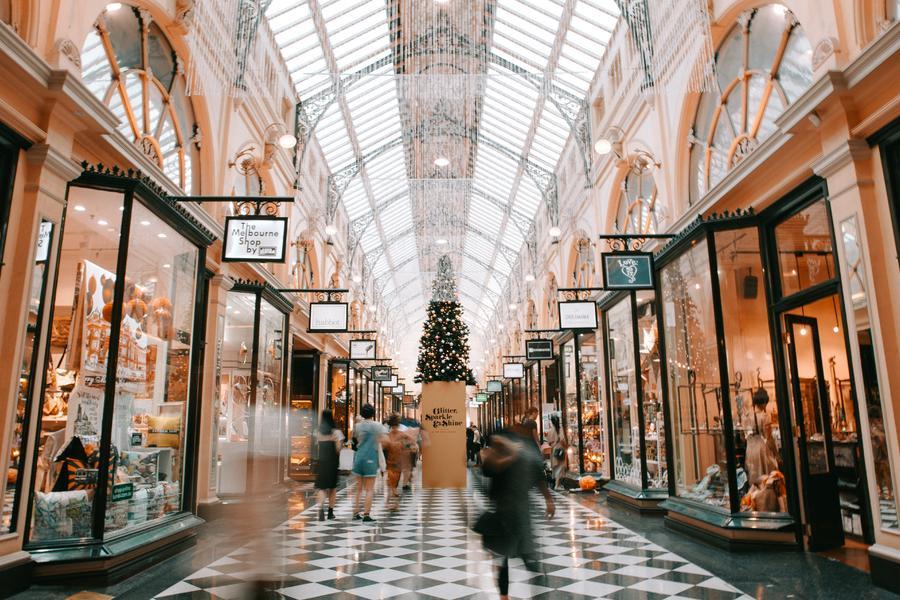 Founded in 2002, Xue Ji is deeply engaged in the research and development, production and store sales of roasted seeds and nuts. Its main products include freshly roasted nuts, melon seeds and peanuts, dried fruits and vegetables, preserved fruits and puffed foods, etc.

Chinese Tea Brand Bama Tea (Chinese: 八马茶业) disclosed a prospectus on September 22, intending to be listed on the main board of the Shenzhen Stock Exchange.

According to the prospectus, Bama Tea is mainly engaged in the research and development of tea and related products design, standard output and brand retail business. After years of development, its products shifted to a full range of teas and implemented a franchise model to achieve cross-regional operations.

Ziyan Food raised about CNY 636 million through this IPO, which will be used for food production base, storage base, R&D and testing center, brand promotion, etc. Ziyan foods was founded in 2000, originated in Sichuan, developed in Jiangsu, and is now headquartered in Shanghai. It is famous for its products such as sliced beef and ox tongue in chili sauce, whole poultry products, spicy snacks.

Chinese Ice Cream & Tea Brand Mixue (Chinese：蜜雪冰城) pre-disclosed its A-share prospectus to be listed on the main board of the Shenzhen Stock Exchange on the evening of September 22.

Mixue Ice Cream & Tea is a ready-made tea brand with the largest number of stores in China. As of the first quarter of this year, there are 21,619 stores, of which 21,582 are franchised stores. The reason why Mixue Ice Cream & Tea can expand at a high speed, in large part due to the brand positioning affordable, that is, products are mostly priced between CNY 6-8, much lower than other tea brands, pulling up the purchase frequency, but also conducive to quickly capturing the lower consumption level of the sinking market.

On September 22, Qpendo, a Chinese cross-border e-commerce platform for daily necessities, announced the completion of a strategic financing round with investment from Vip shop (Chinese: 唯品会). The money will be mainly used for further improvement of brand upgrading, global market advertising and supply chain warehousing.

Founded in early 2022, Qpendo is a company that provides high-frequency daily necessities to young fashionable women aged 18-35 in the global market. The company is currently developing its business in North America, Europe, the Middle East, Southeast Asia, Japan and Korea, and other mainstream overseas markets, covering more than 100 countries and regions. 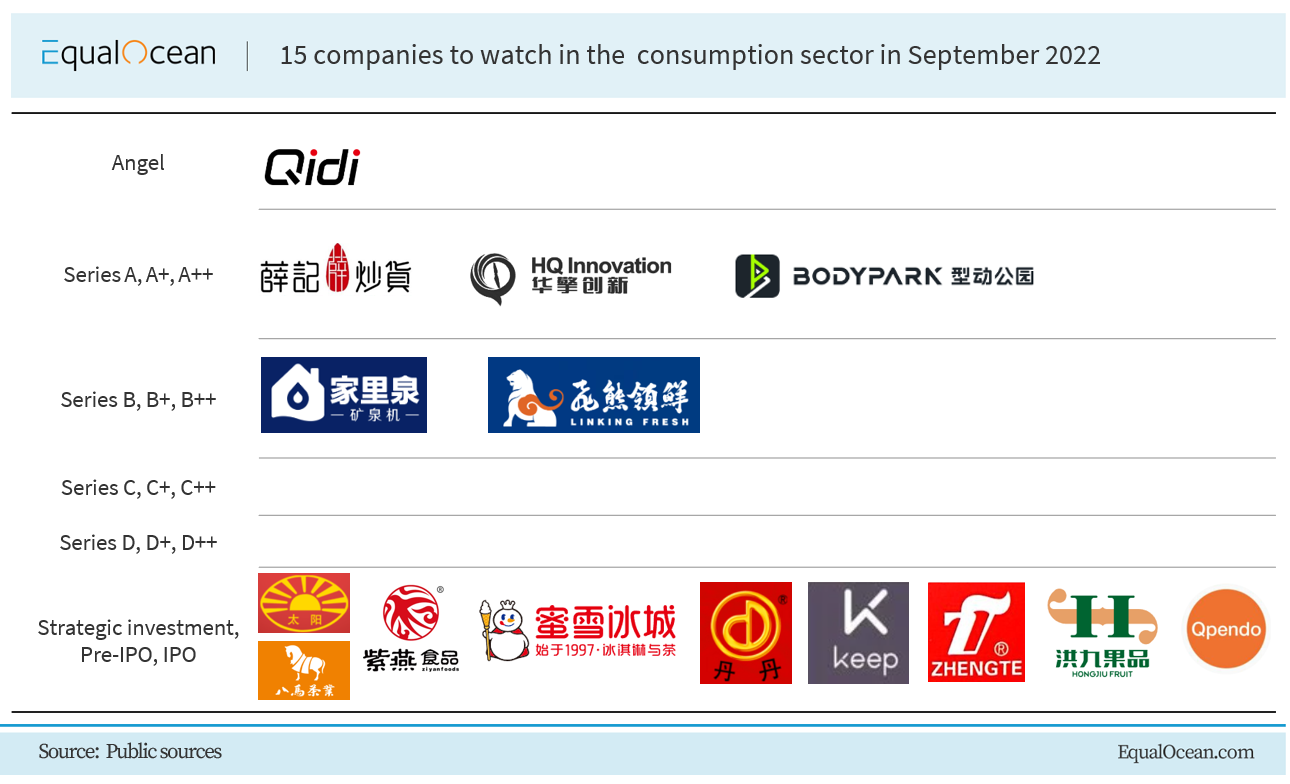 Chinese Smart Glasses Maker Qidi (Chinese: 奇点临近) has completed a CNY 100 million angel round of financing from Joy Capital (Chinese: 愉悦资本), Matrix Partners (Chinese: 经纬创投) and Meridian Capital (Chinese: 华映资本) on September 13. The funds will be used to explore the research and development of the first smart glasses, which will be released in H1 2023.

On September 8, Chinese micro UAV company HQ Innovation (Chinese: 华擎创新) has completed a Pre-A round of financing of tens of millions of CNY, with Shenzhen Sunflower Investment(Chinese: 深圳向日葵投资) as the investor. The financing funds will be mainly used to build new R&D and production bases, wind tunnel construction, team expansion, etc.

On September 19, Chinese AI-powered Fitness Platform BodyPark (Chinese: 型动公园)  announced that it has closed a Pre-A round of funding of millions of USD led by Frees Fund (Chinese: 峰瑞资本) and followed by Picus Capital. Previously, BodyPark received an angel round of funding from ZhenFund(Chinese: 真格基金) .

Keep, a Chinese intelligent fitness platform, updated its prospectus on the Hong Kong Stock Exchange on September 6, 2022. In February 2022, keep submitted the listing application document for the first time and planned to go to Hong Kong for IPO. However, because the hearing was not passed within six months after the prospectus submission, the status of the keep's listing application showed "invalid."

Founded in 1996, Zhengte (Chinese: 正特股份) is a high-tech enterprise that integrates the research and development, production and sales of outdoor leisure furniture and supplies. The company has two series of products: shade products and outdoor leisure furniture, and was successfully listed on September 19, raising CNY 441 million. Zhengte expects revenue for the first nine months of 2022 to be CNY 1.122 billion to CNY 1.182 billion, an increase of 15.53% to 21.70% over the same period last year.

The listing was priced at HKD 40 to HKD 52, and a total of 2,086 valid applications were received for a total of approximately 846,000 shares under the public offering. GF Global Capital and Southern Asset Management also joined as the cornerstone investors.

This round of financing raised the net amount of around HKD 497 million after deducting issuance fees and other expenses, making Hongjiu Fruit the first Chinese mainland fruit company to be listed on the Main Board of the Hong Kong Stock Exchange.

The water appliance brand Jialiquan (Chinese: 家里泉) has completed a Series B funding round of nearly CNY 100 million (USD 14.4 million), led by Fintrek Capital (Chinese: 沣途资本) , followed by GGV Capital and Tiantu Capital (Chinese: 天图资本), with Mumian Capital(Chinese: 穆棉资本) acting as the exclusive financial advisor. This round of financing will be mainly used for brand building and investment in the research and development of new categories of mineral water machines.