For healthcare, we at EqualOcean have identified 20 companies worth watching in Q4 identified by proceedings. We select venture capital investments of over CNY 200 million on average or the equivalent value in USD in a single round.

From well-established MNEs to numerous smaller startups with just a few dozen employees in a single office, these companies are changing the face of the industry. They are leveraging their considerable talent to find innovative solutions to the most pressing issues in healthcare. They are also saving countless lives and extending healthspans in areas such as biopharma, medical devices, healthcare big data or CXO.

On October 10, SprintRay (Chinese: 迅实科技), a digital dentistry solution provider, announced that it had completed over USD 100 million in a Series D financing round. Softbank Vision Fund II led this round, followed by Yiheng Capital and Zhongwei Capital, as well as long-term backers Chende Capital and Yuanyi Capital. Founded in 2013, SprintRay provides digital chairside solutions for dental institutes. Using its newfound capital, the firm plans to build out its business beyond its traditional US and European target markets to generate more sales in Southeast Asia.

On December 23, Qitan Technology (Qitan) (Chinese: 齐碳科技) announced that it had raised CNY 700 million in Series C funding round, the largest financing in the field of biotechnology in the primary market, which was led by Meituan, with participation from existing investors HuaGai Capital, BioTrack Capital. HaoYue Capital acted as the exclusive financial advisor. Proceeds will be mainly used to expand product matrix, accelerate the launch of medium and high-throughput sequencing platforms, explore diverse application scenarios, and expand global business. Prior to this round, Qitan had completed a Series A funding round worth more than CNY 100 million in May 2020 and a Series B funding round worth more than CNY 400 million in June 2021. 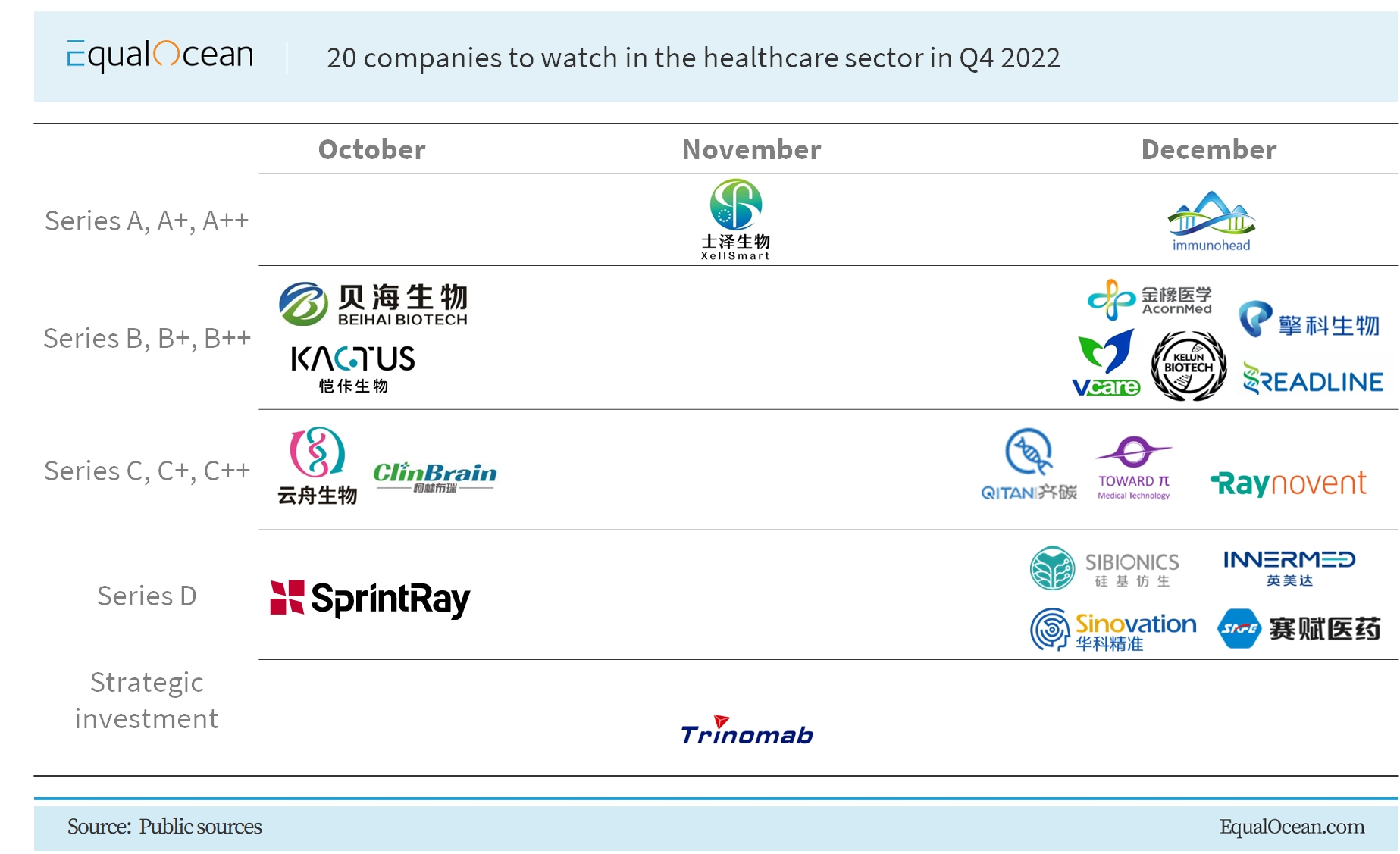 On December 2, a Beijing-based CRO company focused on novel drugs, SAFE Pharmaceutical Techonology (Chinese: 赛赋医药) announced that it had snapped up CNY 500 million in a Series D round led by two state-owned investors including SDIC Venture Capital and China Reform Holdings. Other investors include Taiping Medical, Jianxing Medical Fund, and CICC Capital. Probe Capital served as the financial adviser of this financing. This funding will firmly support SAFE’s aggressive reach into the international market with the expansion of experimental facilities for the next generation cell and gene therapy drugs technology platform.

On December 21, medical device company SiBionics (Chinese: 硅基仿生) announced that it had raised nearly CNY 500 million in its Series D round of financing, which was jointly led by Shanghai HealthCare Capital and Guangdong Chinese Medicine Healthcare Capital, with participation from Industrial Securities Capital, Next Capital, China New Town and other investors. Optimas Capital acted as the financial advisor. Proceeds will be used for R&D of new products, the expansion of automatic production lines, and business development both domestically and internationally.

On December 5, Tsingke (Chinese: 擎科生物), a high-tech enterprise in synthetic biology, announced that it had completed a Series B funding round worth more than CNY 400 million, which was led by Henan Investment Group Huirong Fund Management and Fortune Capital, with participation from Capitallink, Qingsong Fund, Zhongyuan Asset, and Jolmo Capital. Glory Capital and WinX Capital acted as the financial advisors. Proceeds will mainly be used for the R&D investment of Tsingke’s gene factory, the upgrading of its technology platform, the talent expansion, and the advancement of global deployment, aiming to build an intelligent and automatic production platform that meets global standards.

On December 30, Raynovent (Chinese: 众生睿创) announced the completion of a Series C financing of CNY 370 million. This round of financing was jointly led by Eide Fund and Efung Capital, with participation from Wanlian Guangsheng, Guangzhou Guoju Venture Capital and the existing investors Sentient Pharmaceutical and Lake Bleu Capital. Haoyue Capital acted as the exclusive financial advisor. After this financing, the company will focus on advancing clinical trials in its core R&D pipeline and commercializing its novel coronavirus and nail flow drugs.

On December 9, Synthetic Biology company Redpine (Chinese: 瑞德林生物),  raised a CNY 300 million Series B financing round, which is led by Yuexiu Industrial Fund, with participation from Stao Capital, Guocu Venture Capital, Caixin Private Equity and other VCs. The funds raised in this round are mainly used for capacity upgrading, product iteration and updating, and accelerating domestic and overseas commercial expansion. Founded in  2017, READLINE is a high-tech enterprise focusing on the R&D and production of functional healthy raw materials with synthetic biotechnology as its core and multidisciplinary cross-application technology platform as its base.

On October 25, the healthcare big data leader ClinBrain (Chinese: 柯林布瑞) completed the Series C round of financing of nearly CNY 200 million, led by Legend Capital and followed by Guohe Investment. This round of financing will facilitate ClinBrain to continuously deepen its expertise in the field of healthcare big data, explore the deep integration of big data and AI in the healthcare industry, promote the R&D of underlying technologies and scenario-based applications, and accelerate the promotion of industrial digital and intelligent upgrading.

On December 26, Vcare Pharmatech (Chinese: 威凯尔医药), a high-tech company providing R&D services for the whole industry chain of chemical drugs, announced that it had completed a CNY 200 million Series B round of financing. This investment was led by Changjiang Venture Capital, with participation from Lianhe Hongcheng Venture Capital (Chinese: 联合宏诚投资) and Huadian investment. Changjiang River Industrial investment and SDIC continued to invest. Proceeds will be used to accelerate the promotion of the clinical development of its key innovative drugs and the construction of CDMO industrial base.

On 30 December, immunohead (Chinese: 易幕峰), a leading company that develops innovative cell and gene therapy drug, announced that it had completed a nearly CNY 200 million Series A+ financing round. This investment was led by SDIC Venture Capital, followed by Chengdu Bio-Town Equity Investment Fund Mangement. Proceeds will mainly be used to accelerate the promotion of clinical research of multiple pipelines including IMC001, IMC002, and IMC008.