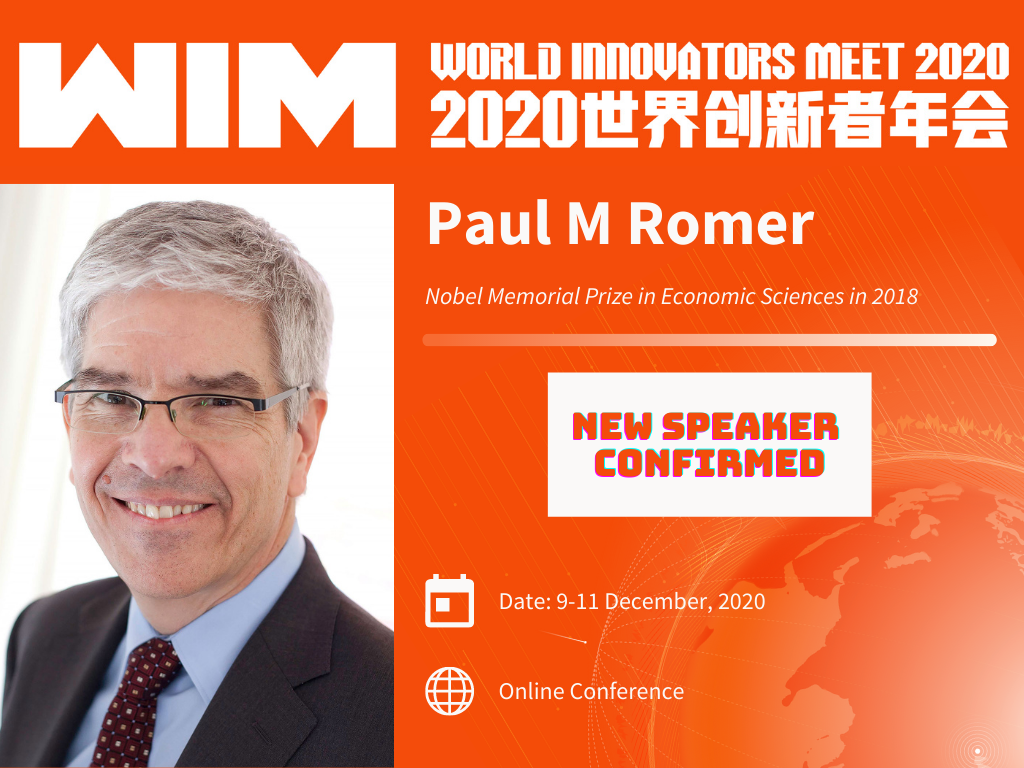 "Paul clearly explained the key role which knowledge plays in promoting long-term social and economic development. When the economy grows by a few percentage points every year and is sustained for a few decades, peoples' lives will change drastically. Previous macroeconomics research has emphasized that technological innovation is the main driving force of economic growth, yet, how market regulation and conditions determine the direction of technological revolution has not been explored. Paul shed insight on this problem by demonstrating the economic effect on the management of a company's vision, thereby generating novel ideas and innovations."

Award Ceremony Speech by the Committee on Paul Romer, the winner of the 2018 Nobel Prize in Economics.

In our materialistic world, no enterprise nor person can ultimately detach from two 'fates': diminishing returns and scarcity.

The so-called ‘diminishing returns’ refers to the classic economic principle depicting lowered output regardless of increases in input, after a period of time.

The economist Malthus asserted that the output one gets from farming a piece of land does not equate to increases in capital and labor. Even with additional investment in a piece of land, after exceeding a certain limit, the subsequent additional output will gradually decrease.

Scarcity is another inevitable occurrence. Though the production of commodities is constantly adapting and innovating, it is still insufficient compared to people's ever-expanding demands. Ultimately, the outcome is an exacerbated need for continuous investment and production in order to meet the demand for heightened property and wealth, so as to provide more people with commodities.

The above two interlinked concepts form a vicious cycle: scarcity drives continuous production, though the economic growth brought by the production stagnates.

In such a world, what sustains economic growth?

Prof. Paul Romer, the winner of the 2019 Nobel Prize in Economics, gave his very own insight into this question after decades of research.

His answer has become one of the most critical theoretical cornerstones for global technological advancement and economic progress since the 1980s.

The United States in the 1970s was experiencing one of the most challenging and unstable periods in its history. During that time, the US Government's ability to intervene in the economy had reached its limit. Yet, the economy fell into a stagflation: inflation was on the rise while the economy plummeted.

With the development of the electronics industry by the mid-1980s, emerging industries such as laptops began to appear, causing the stagnated economy to pick up gradually. Meanwhile, the technology industry began to thrive with companies such as IBM and Apple starting to surface.

Romer had noticed such emergent trends and industries; he then raised the question, "what maintains economic growth in a materialistic world characterized by diminishing returns and scarcity?" Now considered one of the most classic questions in the history of economics, Romer discussed it in his doctoral dissertation at the University of Chicago in 1983, titled ‘Dynamic Competitive Equilibria with Externalities, Increasing Returns and Unbounded Growth.’

This paper laid the foundation for the rise of Romer's Endogenous Growth Theory. A few years later, another well-known paper was published in 1986, ‘Increasing Returns and Long-run Growth,’ where Romer initially constructed the Endogenous Growth model. Romer argues that knowledge and specialized human capital can be the inputs that bring about increasing marginal productivity. In other words, those are the key factors that may impact an economy and allow it to overcome the effects of diminishing returns and scarcity while maintaining growth. Though this may be recognized as a consensus in our era, such a notion was rather bold and innovative back in the 1980s when contemporary economics was still emerging.

Liansheng Zheng, an associate researcher at the Institute of Finance of the Chinese Academy of Social Sciences, once wrote an article summarizing Romer's Endogenous Growth model:

"Romer excluded variables such as exogenous technological progress, intercountry differences, preferences and population size, emphasizing knowledge as the main form of capital. Based on this, he constructed an equilibrium model of endogenous technological progress, in which long-run growth is mainly driven by the accumulation of knowledge from human capital. Doubling research investment within a certain period does not equate to doubling the production of new knowledge; that is, the production of new knowledge has a diminishing marginal effect. However, research and development investment into new knowledge has natural externalities itself, such that new knowledge of one enterprise may have positive externalities for other enterprises. Knowledge is therefore a factor with marginal increasing effect in the production process."

Technological research and development, various new knowledge generated from laboratories and industries, and the reserve and growth of professionals, can eventually become the core factors that promote economic growth and generate externalities to other companies and industries. In simpler terms, technological R&D is what drives everybody forward and better.

With the rapid development of transistors, integrated circuit industries and personal computers (PCs), endogenous technological advancement started to enter the homes of the American people in the 1980s. While this created a vast ‘incremental market,’ it also helped all walks of life improve production efficiency and management capabilities.

Soon after, government entities and large enterprises also realized the significance of PC and informatization for management, Oracle as an example, has risen to become one of the largest functional software companies operating at hundreds of millions of dollars of revenue.

The starting point for all this was the development of various early computer and electronic component industries that sparked during World War II. Decades of accumulation of knowledge, technology and professional talent have finally converged into the era of development we are in right now.

Fast forward to the 1990s, when the global technology industry continued to develop rapidly. In the late 1980s and early 1990s, modern-day software giants such as SAP and Oracle continued to thrive and became the most successful companies in software applications, which complemented the arrival PC. At the same time, Internet-related industries and applications also quietly emerged.

Around the same time, early Chinese Internet companies such as Alibaba and Dangdang also began their entrepreneurial journey.

Just like that, Romer's First Endogenous Model was fully illustrated in the uprising of entrepreneurship, professional knowledge and skillset in the early development of the technology industry post-1980s. This strongly promoted the economy and completely broke through the stagnation and dullness of the US economy in the 1970s.

First, technological progress is the core of economic growth;

Yet, there is a problem here. Consider the idea that "technological progress is derived from market incentives and conscious investment" – "investment" should not only be regarded as a simple investment of money and capital but also encompassing time and energy, which in some cases may be even more valuable than a monetary investment.

For example, a certain person named 'Xiao Ma' witnessed the rapid development of the Internet industry in the early 1990s and decided to enter this field. To do so, he needed to conduct various types of research and undergo specific training. During this process, the real ‘capital investment’ was relatively low; yet, the emergence of many more Xiao Mas would be enough to have a positive impact on the developmental process of the entire Internet industry.

All in all, Romer concludes that economic scale-up is no longer the main driver of economic growth; rather, it is that of the human capital. In the current  technology and innovation era, this reasoning is being continuously validated and strengthened.

Romer's strenuous economic research has led to a conclusion which now seems like common sense. This alone is enough to showcase the success of his research – it has become an economic consensus today.

The fruit of Romer's research has substantial policy-guiding implications – the accumulation of skill and knowledge requires relatively lengthy and investment and heavy externalities. In other words, it could lead to free-riding and even infringements from individuals and companies who do not respect intellectual property rights. Therefore, the government must support the accumulation of knowledge and professional capabilities of the whole society through regulation, including implementing subsidies for particular early research projects, subsidizing innovative technology companies and providing housing, necessary living expenses, pension schemes for top talents.

At the industry level, it is necessary to leverage policy regulations and financial tools – it was especially emphasized in Japan and South Korea, and currently in China – to foster the development of technologically innovative enterprises so they could accumulate more professional talents. Romer could have hardly have thought that his work, completed so many years ago, would now gain unprecedented recognition in China and contribute towards China's rapid development over the past few decades.

On a similar note, Romer has always paid close attention to China's economic development. Not only did he teach at the New York University in the Shanghai campus from 2013-14, but he also travels to China regularly to participate in forums and conduct academic investigations in many Chinese cities.

Romer was particularly interested in China's urbanization. "It took 50 years for Singapore but five years for Shenzhen," he commented.

Yet, as his renowned theory conveys, it is not enough to build up assets alone; he hopes that people can continue to learn and accumulate knowledge, so as to bring novel impetus for economic growth. For example, he emphasized at the Sina Finance event in 2017 that a job should have "double benefits," not only providing income but also providing opportunities for employees to gather more skills.

Romer gave a specific example: surgeons do not learn to perform surgery by reading books. They will read the books first, then observe how others do the surgery, and then have someone guide them to carry out the procedure. "A lot of work is the same. Important learning is done at work. Therefore, the important thing is not employment itself, but to ensure that work is an opportunity for everyone to learn, to bring about new momentum for economic growth."

At the 2020 World Innovators Meet annual conference hosted by EqualOcean, we are honored to have Prof. Paul Romer join us on December 9, 2020, to share his Endogenous Growth Theory for China and the global economic development. We believe that amid this year's immense uncertainty, it will bring a certain validity to the scientific and technological innovators around the world.

We sincerely welcome you to join the World Innovators Meet annual conference, WIM2020. This year, the theme is ‘Technology and Innovation: Connecting the World,' and it will be held between December 9-11, 2020.

Click here to register immediately, and you will receive:

[Global Trends] Key insights from 11 Industry and Overseas Chapters made available to you for all three days of WIM2020.

[Insightful Conversation] Connect with 120 top-notch global speakers and listen to their unique insights while interacting with them online.

[Innovative Community] Join an exclusive network of 10,000 professionals to participate in discussions and gain first-hand information from fellow participants.

[Business Networking] Gain 1:1 business-connect opportunities to speed up the potential business partnership to meet your needs.

Join the WIM2020 family and become a member of the World Innovator Community, participating in a technology and innovation carnival that will bring the world right to your doorstep, all while bringing a forward-looking end to the extraordinary year of 2020!

If you would like to become/recommend a speaker, discuss cooperation opportunity or media partnership, apply for the World Innovators Award or to be a volunteer, please scan the QR code below and fill in the WIM 2020 Cooperation Form (we recommend you do so digitally). We will be in touch within three working days. Thank you and welcome!