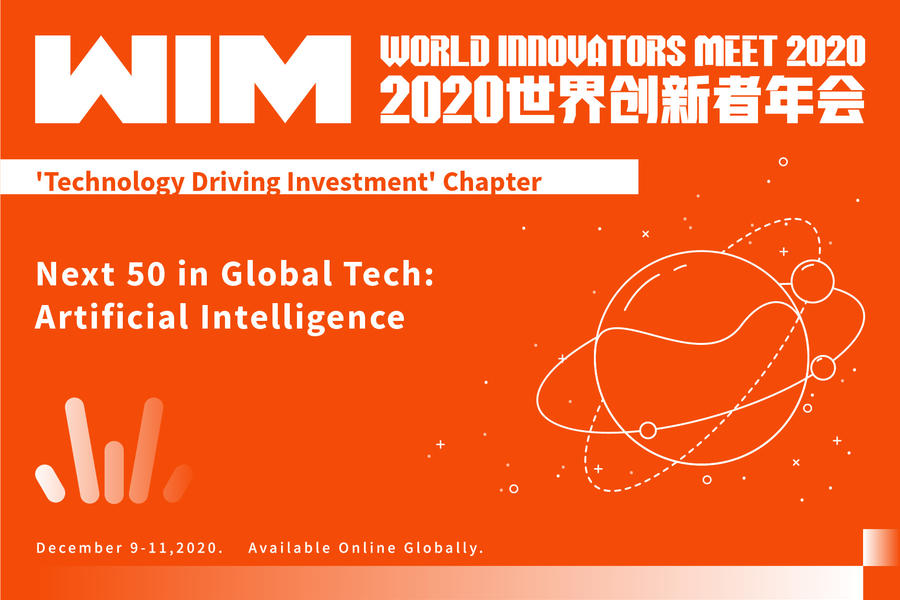 On December 9-12, EqualOcean is holding the World Innovators Meet (WIM) 2020. This year, the event's main topic is 'Technology and Innovation Connect the World'. WIM2020 gathers innovators from Asia, Africa, Europe and the Americas to share their knowledge and key achievements, promoting the concept of 'Tech for Equal'.

In an article given to college graduates, Bill Gates once wrote that this is 'a magnificent era.' If you look for opportunities that can have a huge impact on the world today, the first is Artificial Intelligence (AI).

In the 21st century, a brand-new technological revolution has emerged — the fourth industrial revolution. AI can comprehensively promote the upgrading of traditional industries and help enterprises realize smart transformation. Meanwhile, AI can also help achieve population-scale effects, solve the needs of the bottom of the pyramid, and relieve environmental pressure.

Therefore, EqualOcean released the 'Next 50 in Global Tech: Artificial Intelligence' report, it will study the current situation of the global and China's AI industry from four aspects of talent, academic, financing, and market size, analyze the potential opportunities and challenges of AI applications in China. Besides, EqualOcean gains insights into the development trend of global and China AI.

AI has a history of 70 years. Early AI originated from simulating human behaviors, allowing machines to obtain the ability of humans to complete tasks, such as solving math problems and assisting English learning. However, AI has experienced two ‘winters’ due to factors such as insufficient computer performance, high operational difficulty, and obvious boundaries.

In 2017, deep learning technology was applied in the Robot Competition, which once again pushed AI to the market. The algorithm can enhance and expand human intelligence based on a large amount of underlying data so that machines are capable of tasks that human intelligence cannot complete. AI is based on deep learning and derives different AI application technologies. By screening the number of AI technology patents and the number of active companies, EqualOcean defines computer vision, natural language processing, speech recognition, knowledge graphs, and multi-technology integration as the current mainstream AI application technology. EqualOcean compiles the ‘Next 50 in Global Tech: Artificial Intelligence’ based on the above five AI technologies. 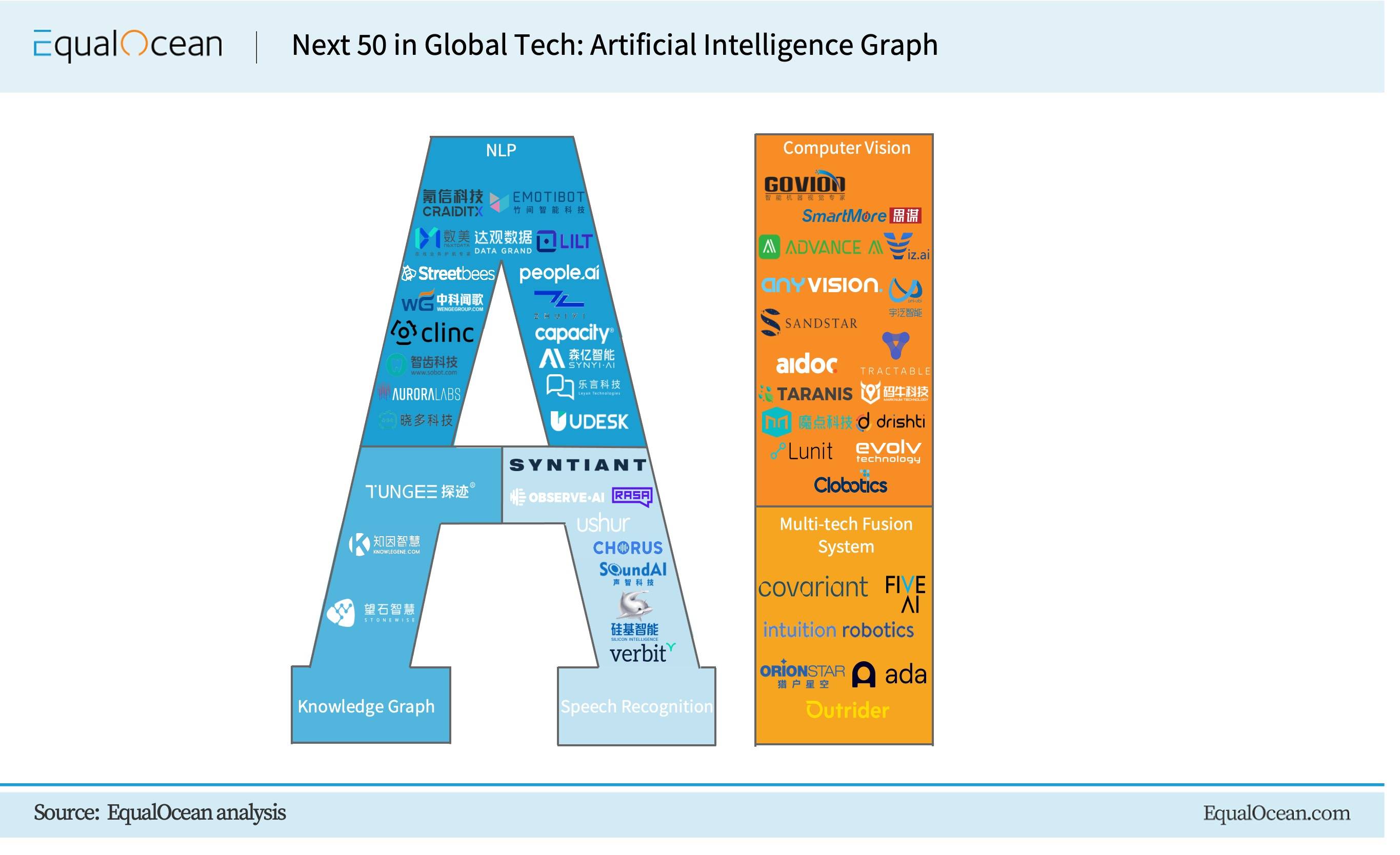 Under the global trend, the potential opportunities and challenges of AI in China

Academic research: Global AI academic research capabilities are improving yearly, and China's growth rate is particularly obvious. China, and surpassed the U.S. in 2004 and the EU in 2018, ranking first in the world. However, the influence of Chinese papers is far lower than that of the U.S. and even lower than the world average. Since 2013, the influence of China's A-thesis has exceededbeen higher than the world’s average, and the gap with the U.S. has gradually narrowed. 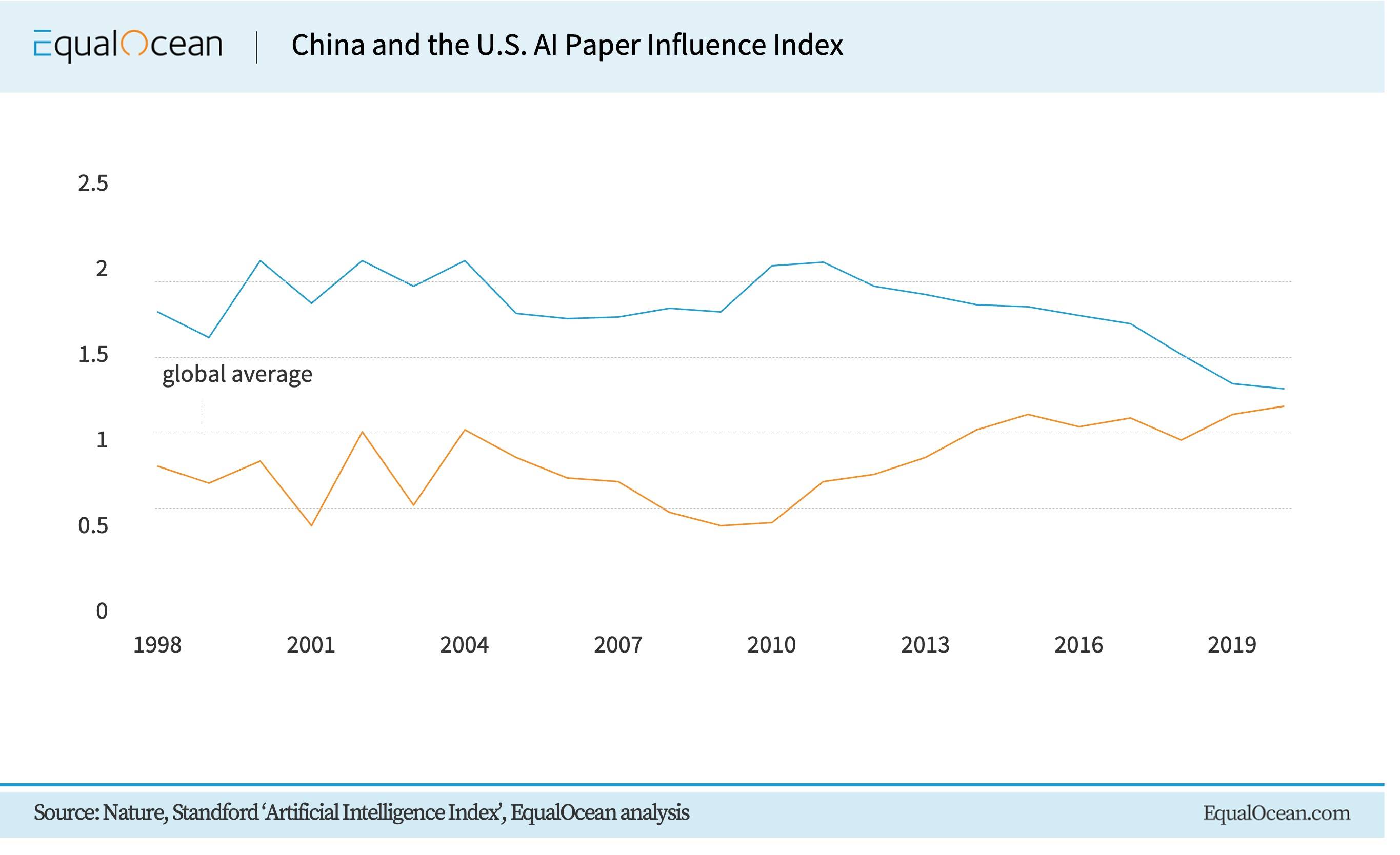 Professional talents: the shortage of AI talents may lead to the ‘Buckets Effect’. According to statistics from Talentseer and the AI talent community, there are currently 478,000 AI professionals in the world, but they still cannot meet the needs of AI’s rapid development of AI in most countries. According to data from MIIT, China faces the same dilemma, with a talent gap of 300,000.

In the future, China should increase the training of AI talents, launch relevant favorable policies to retain domestic talents, and attract overseas talents. 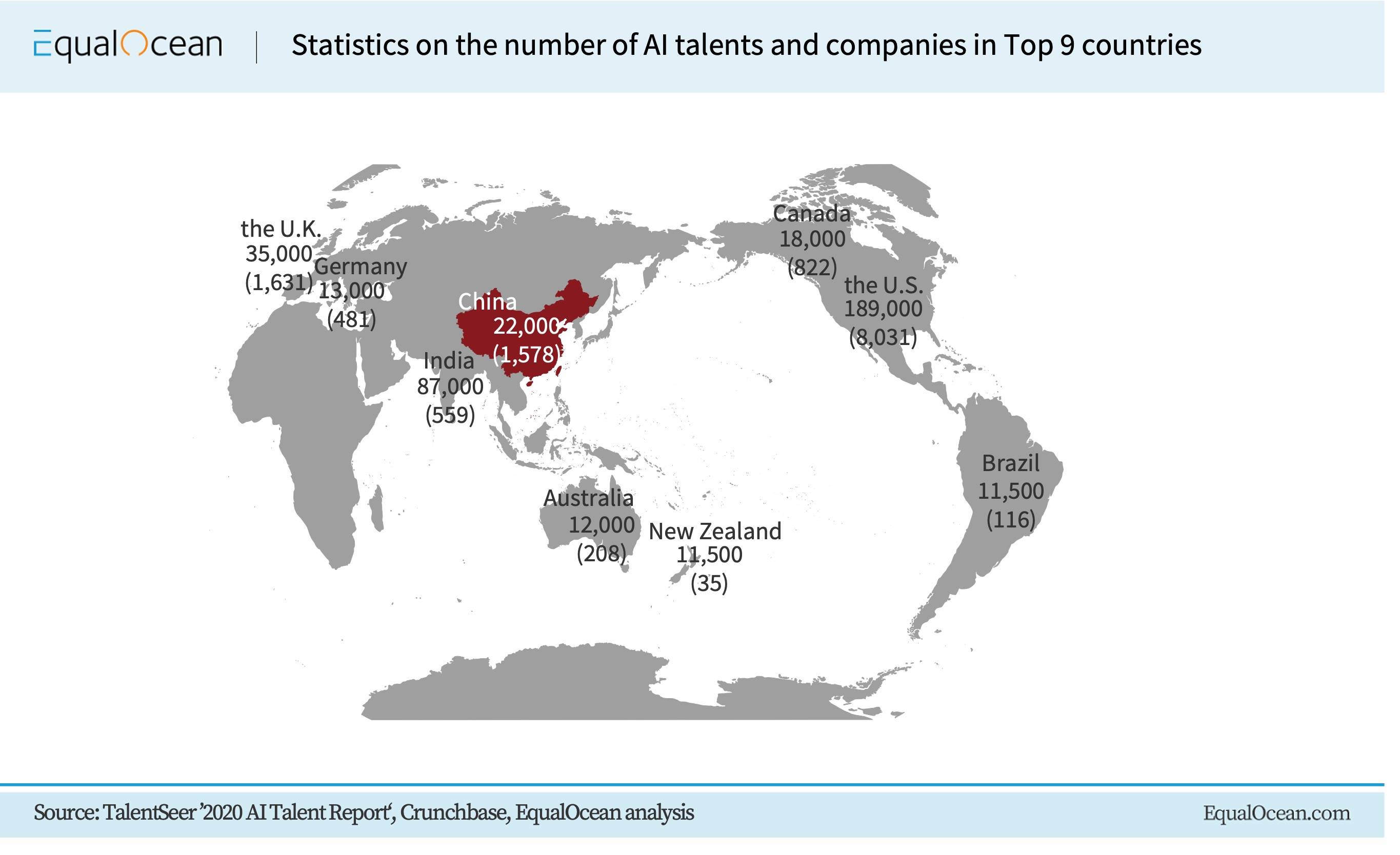 Industry investment: As of November 2020, EqualOcean has collected the number of financing events in the global AI field and found that mainstream AI vertical scenarios have emerged. Since 2010, companies related to computer vision and natural language processing have received 1,230 and 929 financings respectively. These are relatively popular AI applications. 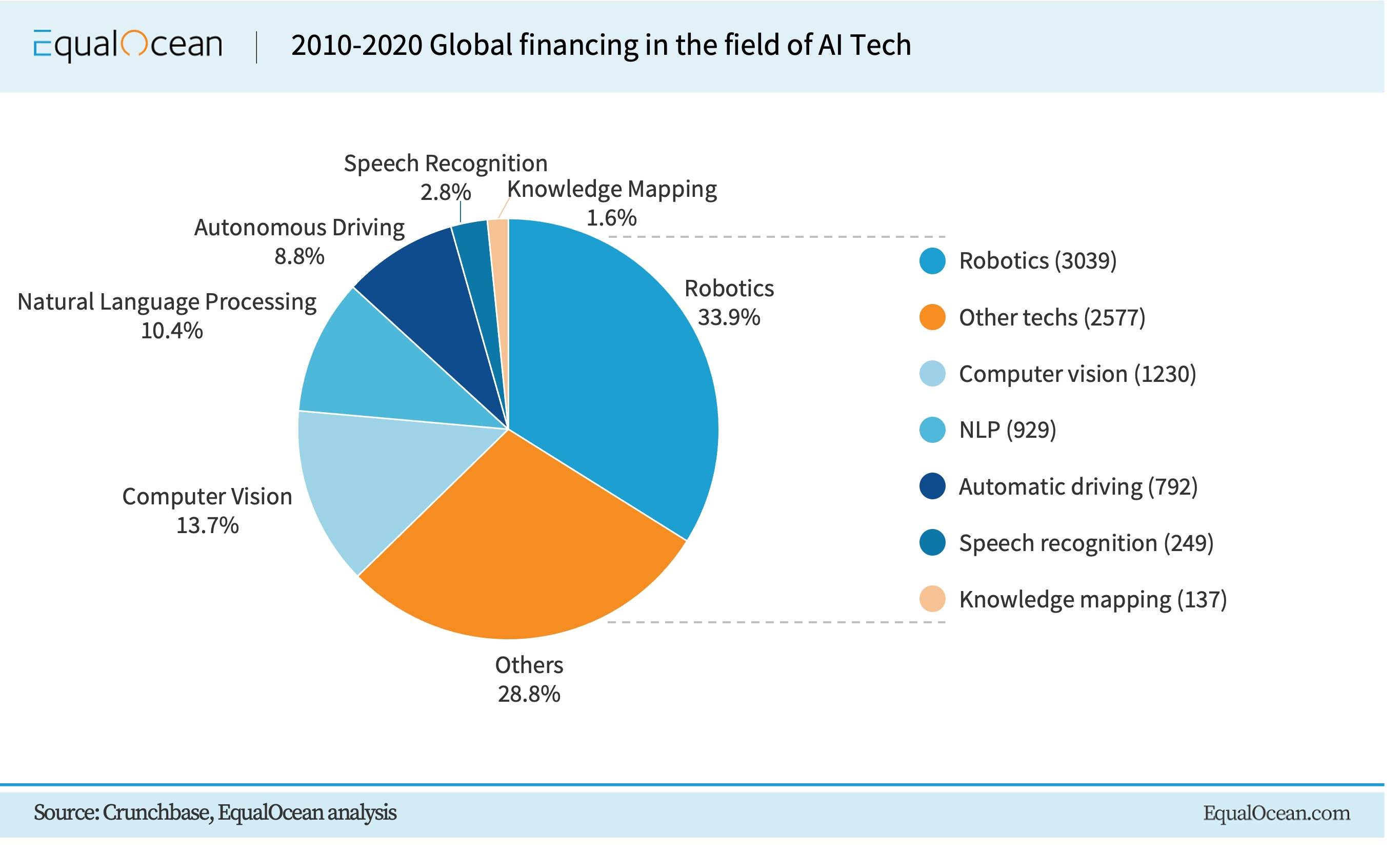 Market size: In 2020, the global AI market size is expected to reach 103 billion U.S. dollars. China’s AI market will reach 14.3 billion U.S. dollars, accounting for one-seventh of the world’s, and increasing yearly. China has a very competitive and potential market for AI, sees the increase in AI application scenarios. Therefore, the proportion of China's AI market in the world will continue to expand. In addition, smart manufacturing, smart finance, smart medical, smart retail, and smart cars are all mainstream scenarios for current AI. 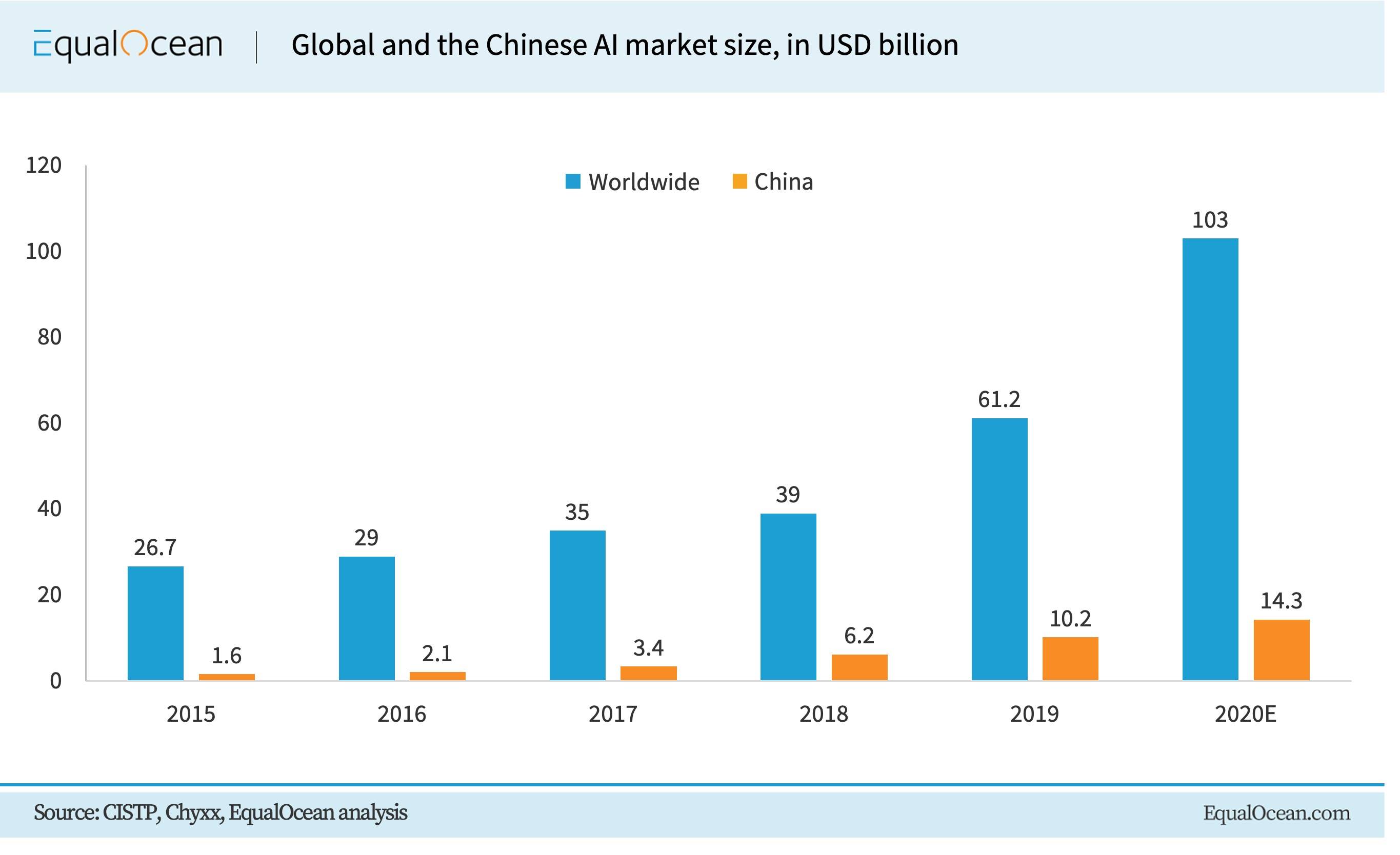 In 2020, AI is in a stage of rapid development, and technology is rapidly iterating. It takes a lot of manpower and time for enterprises to develop AI technology. Many start-ups quit due to high R&D investment. Therefore, AI companies will form development alliances, share each other's patented technologies, and jointly promote the development of general AI technology.

On the other hand, according to the Gartner AI technology maturity curve, a large number of AI application technologies are still in the trough of the bubble burst. This is because AI still has boundaries with limited application scenarios. AI companies should continue to optimize technology, explore new application scenarios, accelerate the realization of large-scale commercialization, and increase the overall market expectations. Under this trend, the future of AI technology will show versatility, and AI companies will realize pan-scenarios.

The trend of 'AI basic research' will rise in China

Technological iterative innovation is the core driving force for AI development, while related underlying technologies, standards and intellectual property rights are the sources of technological innovation. In terms of AI application technology and the market, China is in a leading position, but basic technologies lag behind the United States, such as deep learning frameworks and chips.

In terms of software, EqualOcean’s analysis found that foreign deep learning frameworks led by Google TensorFlow have received 10,000more people’s attention than China, and TensorFlow has 150,000 people’s more. In China, only Baidu's PaddlePaddle has more than 10,000 people. Therefore, Chinese companies still need to increase the utilization rate of deep learning frameworks and improve the ecological environment.

In terms of hardware, China's chip market occupies nearly one-third of the world’s, but its self-sufficiency rate of domestic chips is very low. China has the world's leading chip design capabilities, but lacks the manufacturing craft of high-precision chips. Therefore, the future trend of chip localization will be prominent, which will better help China to form a closed loop of AI ecology.

In short, the new generation of AI has technical characteristics such as general purpose, algorithmic black box and data dependence, which may cause risks and challenges of different dimensions to society, enterprises or individuals. Therefore, the global AI industry urgently needs effective governance methods, models and frameworks to promote the sound development of the global AI industry.

In the future, the global AI industry will 'ride the wind and waves' and move forward through small data, technology generalization, and scenario generalization. China will also "overtake on a curve", forming a road for the AI development.

By screening multiple indicators such as corporate valuation, financing, establishment time and technical barriers, EqualOcean released the 'Next 50 in Global Tech: Artificial Intelligence' list, aiming to find AI companies with the potential to be leaders in the future.