Paul Romer, the Nobel Laureate: Endogenous Growth Theory and implications for the world

WIM2020's first day's speaker was Paul Romer, who was talking about Endogenous Growth Theory and its implications for China and the rest of the world after the pandemic. 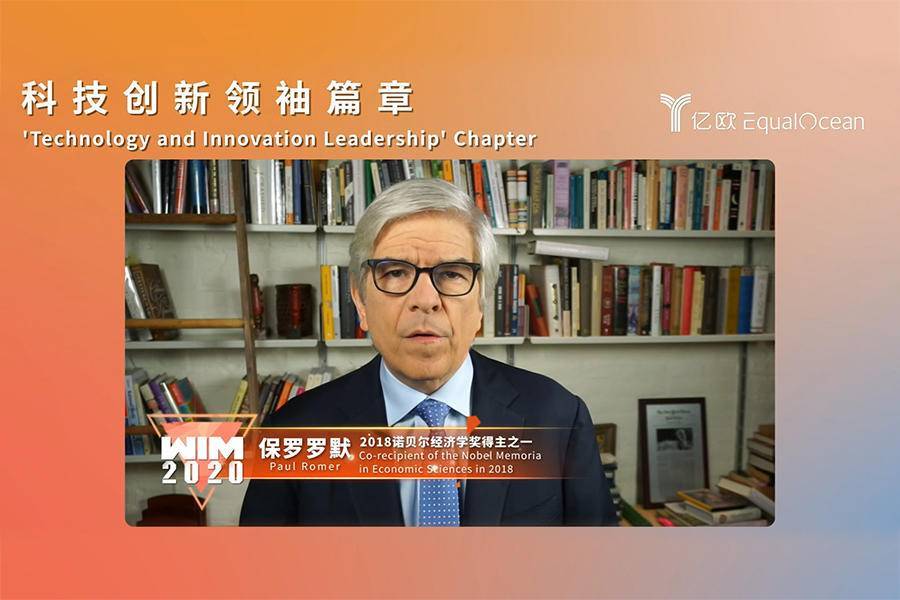 "China and other Asian countries stand out as examples of governments who are willing to be pragmatic, and as a result, they're succeeding in fighting the virus. My prediction is the Western governments will learn from the Chinese government how to provide goods for society and let its economy continuously grow," so claimed Paul Romer, co-recipient of the Nobel Memorial Prize in Economics in 2018 and the lead speaker of the Leadership Chapter.

During the 9-12th of December many innovators from all over the world met up online to discuss technological and industrial innovation achievements in 2020, marking out how breakthroughs are adding convenience to everyday life.  Paul Romer is one of the most influential economists of the USA; he joined WIM2020 and shared his interesting observations on the impact of Endogenous Growth Theory on the world after pandemic.

Paul Romer used simple life examples to explain the key role of knowledge in promoting long-term social and economic development. When the economy grows by a few percentage points every year and this continues for few decades, people live will change dramatically. Previous macroeconomics researches have emphasized that technological innovation is the main driver of economic growth, but how a market's regulations determine the direction of technological revolutions hasn't been studied. Paul Romer has showed to the world how economic factors affect technology and innovation development. In his WIM speech, Professor Romer also noted that the Chinese and Asian governments were successfully able to fight the virus because of their pragmatism and willingness to experiment and implement new technologies for providing goods to their citizens.

Paul Romer invited us to think back to a period almost a century ago – the Great Depression.  This was a major global shock that forced governments to make adjustments. The table presented by Paul Romer economy. According to stable aggregate data from Western countries, the reminds us that the Great Depression was a huge shock to the world USA and Canada, the total output fell by about 15% in three years, and the price level dropped by 30%. Therefore, deflation was a very serious problem at that time. The unemployment rate also increased by nearly 30%. 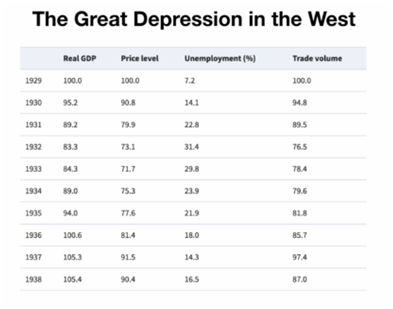 That economic shock happened at a period of time when economic power had become more concentrated, especially in the hands of a few rich and a few very powerful companies. People were resentful over this concentration, and populist opposition to this economic direction was brewing. The Great Depression has exacerbated concerns about whether the market system is something people are willing to live with. Some countries have actually experienced a political revolution, giving up the political decision-making process and making the government more centralized. Actually, these countries unfortunately pursued military strategies, which eventually threatened the whole world and led to the Second World War.

Some countries had successfully dealt with both threats: the potential harm of a depression, and the trend towards inequality and concentration of power, both of which were undermining the operation of the entire market system. The USA adjusted taxes and expenditures by giving the federal government new powers to implement monetary and fiscal policies. Now the world needs some experiments to locate a plan that can effectively prevent the depression and make it just a recession instead of a deep depression as people have already experienced. During the Great Depression the government was practical and willing to try different things, and the successful elements that the USA has retained involve monetary and financial policies.

At the same time, many countries have adapted social security systems for unemployed workers and healthcare system for retirees. Those who suffered most during the Great Depression and lost confidence in the market system were assured that there would be a place where they could get the benefits that the market system brought. There are obvious similarities between the Great Depression and the pandemic – such as attacking countries all over the world and forcing governments to try to implement new policies to protect economy's stability. It's a behavior pattern of many countries that haven’t been making any efforts to fight against the spread of the virus.

China and other Asian countries stand out as an example of government who is willing to be pragmatic, and as a result, they're succeeding in fighting the virus. Said Romer, "My prediction is the Western governments will learn from Chinese government how to provide goods for society and let its economy continuously grow. Unfortunately, the pandemic is not under control in many western countries nor in the USA – this has created both political and economic risks."

Romer reminded us that, as many economists have pointed out, income inequality has been getting worse since the Second World War, which has led to the loss of confidence in our institutions. In the past 10 to 20 years, a more obvious trend has been technology companies, which have developed very rapidly and begun to occupy an important position, not only in the economic aspect, but even in political aspects, forcing the government to support them with the laws and regulation changes. Unfortunately, sometimes these companies were scaled using dishonest methods that caused people to be misled and to distrust technologies and innovation.

Therefore, all Chinese people are now aware that smartphone data can make it possible to control the virus' spread – in the West, the public is reluctant to allow mobile phone data to be used in this way because they are very suspicious of the amount of tracking that has taken place, so the economic and political power and mistrust generated by these technology companies are causing more and more harm to the world. Nowadays, we can clearly see the actions that the governments are encouraged to carry out, such as the antitrust action against Google, the antitrust action against Facebook in the United States that probably may happen soon, and the pressure exerted by the Chinese government on tech's expansion to earn back people's trust in technologies and innovation. 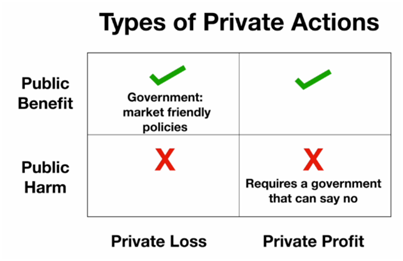 Paul Romer represented in the above table an important role for the government – that people can take actions that are beneficial for society in the market. In the right column, there are actions that beneficial for people who take these actions in the market, and then actions that force them to bear losses. The market tends to do the right thing because it encourages behavior in the upper right-hand box, which is both profitable and socially beneficial. It doesn't encourage people in the bottom left box who are doing enormous harm to society, but do not harm themselves. In the upper left corner, there are some activities that are beneficial to the society, but not profitable for the market. These activities are called 'public goods.' The most important function of the government is to provide public goods funded by taxes, which the market cannot provide. Therefore, in the United States, the most important economic development policy is to make use of public revenue to establish institute system throughout the United States. These institutes can cultivate talents of practical modern technologies, send them to the market to work and innovate, and bring the benefits of innovation to the society.

So the government can support the market by providing these public goods. Unprofitable activities are important for society's development, but unfortunately these are never emphasized. For example, in 2008, many companies innovated in the types of mortgage-backed securities and other related derivative securities that were profitable, but in the end the risks were so high that the entire financial system came close to collapse, as people experienced during the financial crisis in August 2007. But it doesn't mean that we should afraid of experiments; only through experiments we can find what is beneficial to society.

So Paul Romer's prediction is that the western governments will learn how to control the epidemic, and how to keep economic growth stable. Added Romer, "I think the governments in Asia and the West also understand that they should be more active in ensuring that the pursuit of private technology that doesn't lead to harmful results for society as a whole, so even if they continue to support higher levels of research and development in Science and Engineering Education, they must stop things that are harmful to our economic system, the environment, and even the ability of our political system to operate."

Now it may be that some countries will expand the power of governments to stop epidemics and control tech companies to ensure that their actions are socially beneficial. But there may be some problems of populism in some nations – Paul Romer hopes that the USA will take only necessary actions to expand its government's rules. Finally, Paul Romer highlighted the most important questions that the world has to solve in the nearest future: "What we have to focus on in the coming months is that our government is finally beginning to control the pandemic and start to ask the question they need to ask whether the science and technology sector really benefits society as a whole. If countries ask these questions and answer them, they will return to the track of growth and progress, just as we did after the Great Depression. However, there are likely to be some countries that have not answered these questions, which will become the focus of our attention in the coming months and years."