One of WIM2020's first speakers was Hao Shen, who spoke as chief scientist at Big Data Center, State Key Lab of Media Integration and Communications about technology that re-shapes man's development. 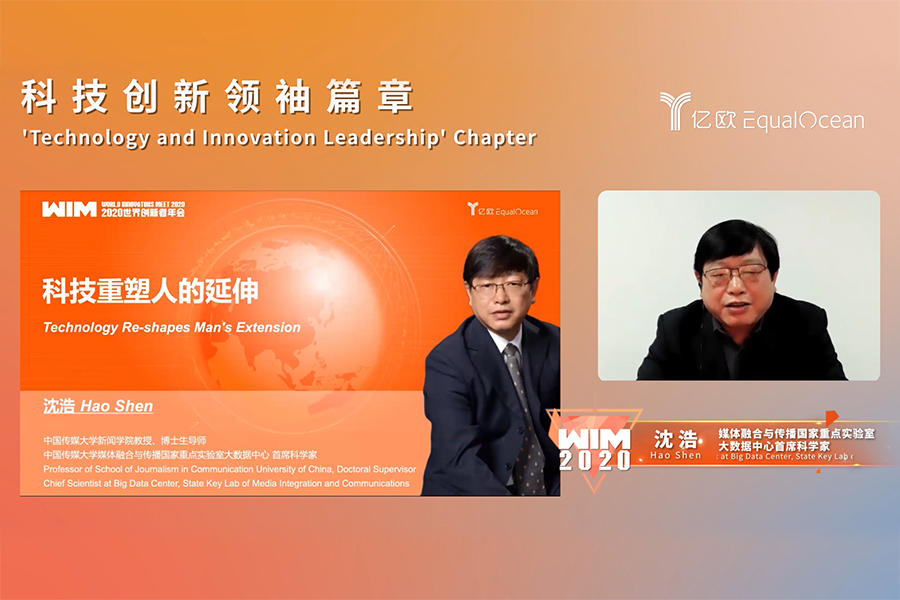 "'5G+AI’ has been widely used in media integration as the fundamental framework of media. Therefore, media integration should be extended to '5G+AI+media', to establish a multi-functional intelligent media platform supported by big data, Cloud computing and blockchain technology," claimed Hao Shen, our lead speaker for the Leadership Chapter.

During the World Innovators Meet on the 9-12th of December, innovators from all over the world met up online to discuss key achievements in 2020, marking out how breakthroughs are adding convenience to everyday life. Hao Shen joined WIM2020 and explained how the integration of modern technology with the media impacts on people's lives.

Technology drives the changes in the media industry

In the modern world, data has become an important factor of social production. Algorithms, computing power and data form the core of the new infrastructure. With the discovery of the potential of data, personalized recommendation algorithms have become a standard function of new media, especially social media. Software defines media, data drives news, algorithms reconstruct channels. Images, videos, text and sounds are the most important communication media, and these technologies get a breakthrough development like photos that were black and white before can be automatically changed into colored photos now. Technology is constantly changing, but its changes are often hidden in culture. Only when a technological revolution happens, people will realize the importance of technology in our life.

The extension of media enables us to understand ourselves better and perceive the world, so media intelligence plays a very important role in shaping the real world. During the process of technology and innovation development, there are important changes such as data news, unmanned aerial vehicle reports (UAV), machine news writing, virtual reality and augmented reality in social media.

With the development of 5G, we can see that some new communication technologies such as live broadcasting have entered our daily lives. Our perception of the world is constantly changing and developing, becoming more and more diversified. Only during the exploration of integration and development of media, intelligence and material world, do people break the traditional cognition of the past and open up a new vision.

General Secretary Xi in '125' speech mentioned two core points: 'four media integrities' – media process, media data, media staff and media effect and 'four forces' – communication, guidance, influence and credibility. 5G, AI and media integration will play a leading role in the process of the new media formation. Big data, Cloud computing and blockchain technology will support the integration of intelligent technology and media. This can not only improve guidance of public opinion in news collection, processing and release, acceptance and feedback but also solve a series of problems such as news authenticity, rumor, media convergence, public opinion problems and so on. The reason for China's success in the epidemic prevention and the resumption of work and production has to do with space-time and geographical big data – data that China has, like the health code, made able to be queried in real-time through an app.

Extension of technology and innovation reshaping

In the future, the city network management system will be refined. When the cities and the Earth are networking, people will see many new things happening around them. So location-based intelligence will become an important part of future media intelligence. From this point, all things will be perceived, connected and intelligent. Artificial intelligence, cloud computing, the Internet of things, 5G and big data are regarded as media support technologies. This core support technology will also involve the visualization of the decision-making screen so that we can truly perceive new things that are happening in the world through a multi-modal form. Therefore, this opportunity may let us see that technology empowers media, it should not only be regarded as a technology, but also as an extension of human consciousness or cognition. "In this extension, we will find that media integration innovation is promoting the digital transformation of our society, expanding our world and finding a new way of thinking," Hao Shen finished his speech.