Weimob Leads the Way in Targeted Marketing, Thriving in the WeChat Ecosystem Part I 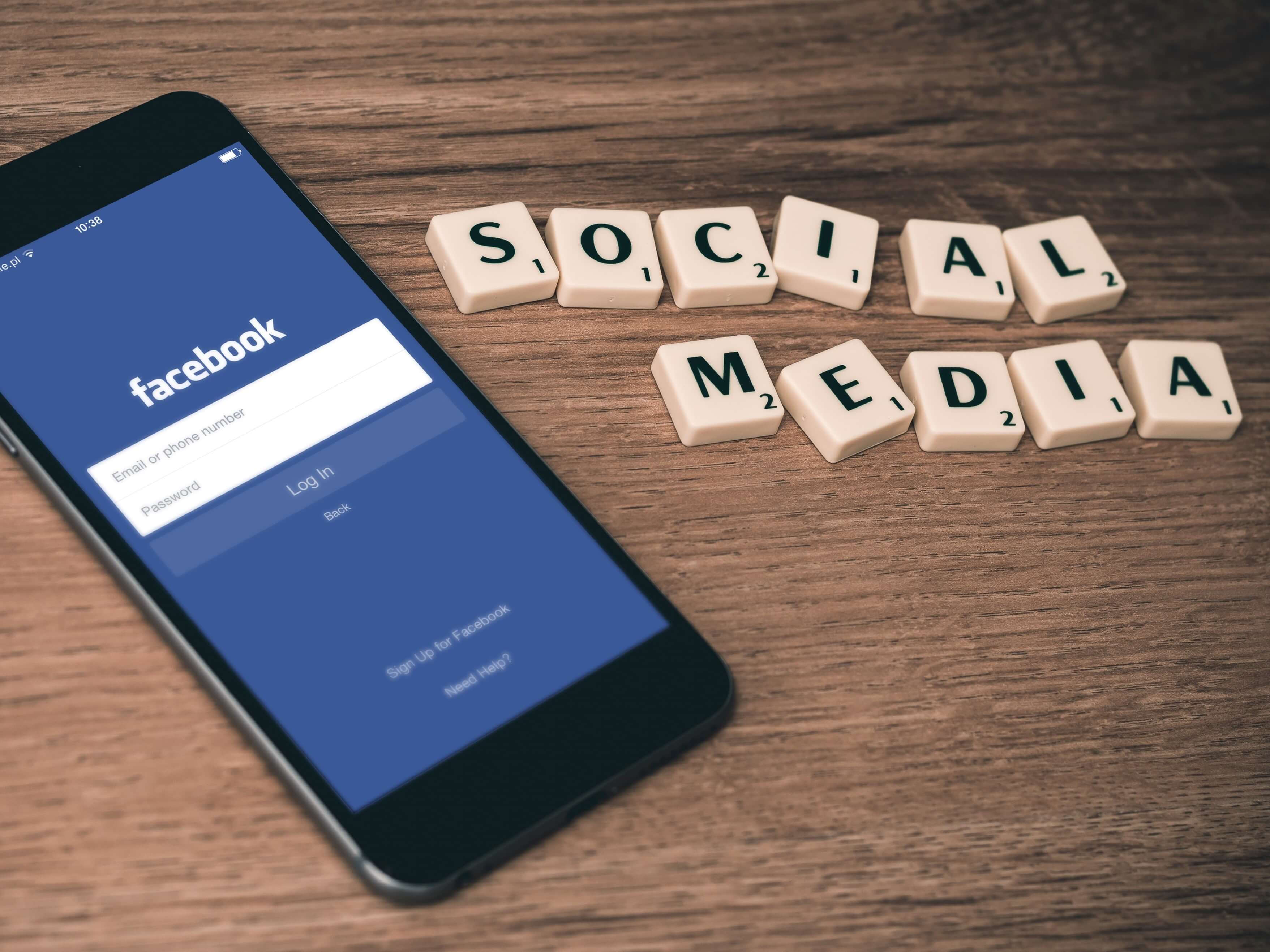 We initiate our coverage on Weimob (02013:HK) with a Buy, setting a price target for the firm of HKD 6.76, implying an upside of 35%. Key drivers of this rating and price target are stated below:

Market – we see the booming Tencent mini-program ecosystem and targeted marketing and Weimob's first-mover advantage in the two areas as strong support for its top line growth. On the other hand, we see SMB Tech as a rising trend with good potential value for companies to crack.

Financials – we see the movement towards a higher targeted marketing shares in total revenues as well as an improving ability to narrow the costs of selling SaaS products a firm sign of increasing maturity.

Weimob is a provider of cloud-based commerce and marketing solutions and targeted marketing services on Tencent's social networking service platforms for SMBs in China. 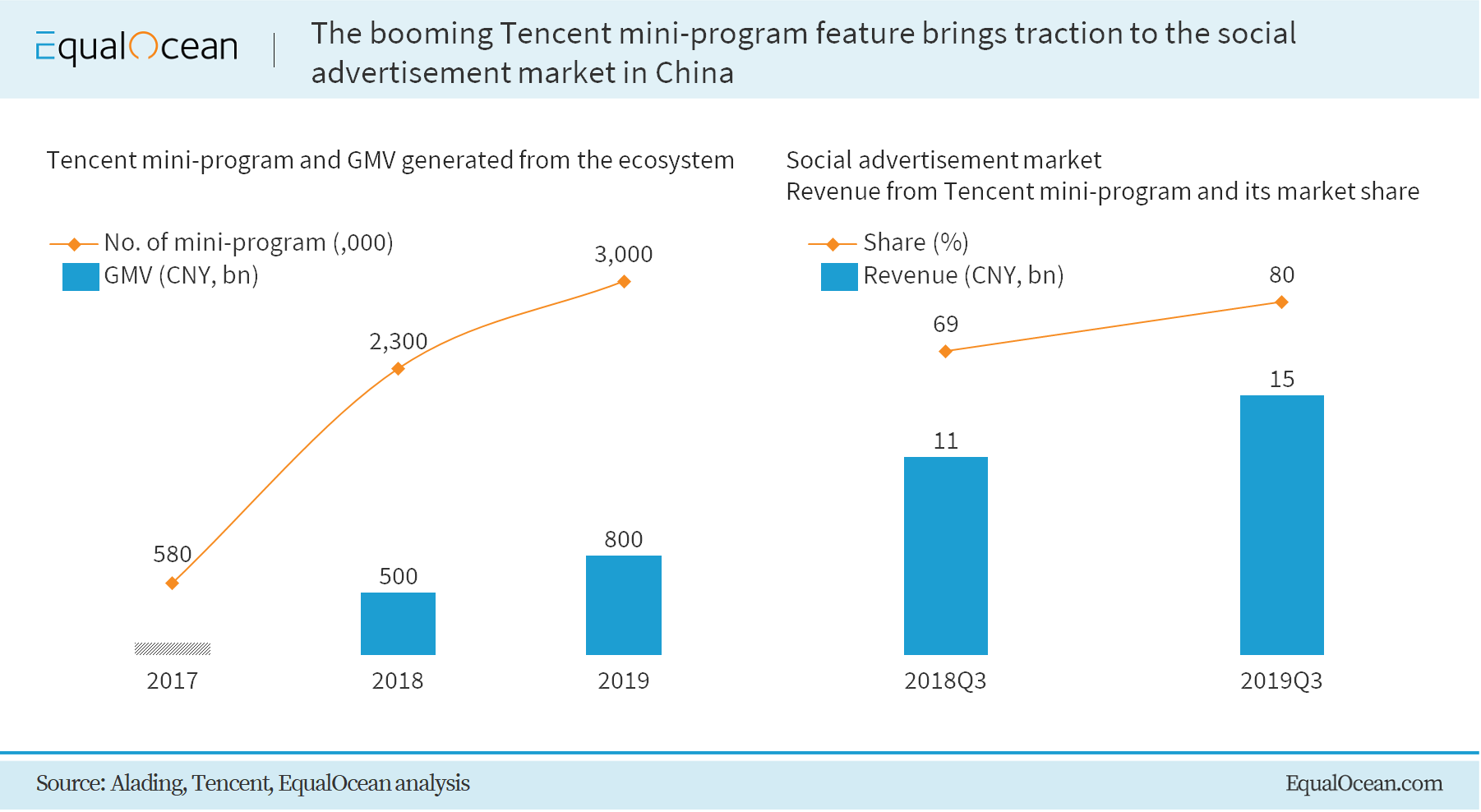 The use of social media in the context of marketing is gaining traction in China. An increasing number of consumers are making their purchases through social media apps such as WeChat and content platforms such as Xiaohongshu (aka Red) these days. This has revolutionized how brands and retailers market and sell their products. Tencent plays a vital role in the competitive landscape, penetrating to various scenarios and industries. Based on WeChat, powered by infrastructure that comprises Tencent Cloud, WeChat Pay, WeChat official accounts and mini-programs, Tencent is positioning itself as the indispensable digital assistant in the era of Industry Internet.

Customers spent CNY 800 billion through Tencent mini-programs in 2019, a 169% increase from a year before; the number of Daily Active Users (DAU), meanwhile, surpassed 300 million. The number of mini-programs grew from 0.58 million in 2017 to 3 million in 2019. Although e-commerce and retail marketers contributed to the surging numbers in a large part, we also see the accelerating demand from a variety of long-tail industry players.

On the other hand, the contribution of mini-programs eclipsed other channels in the social advertisement industry, representing 80% of total revenue in 2019 Q3. 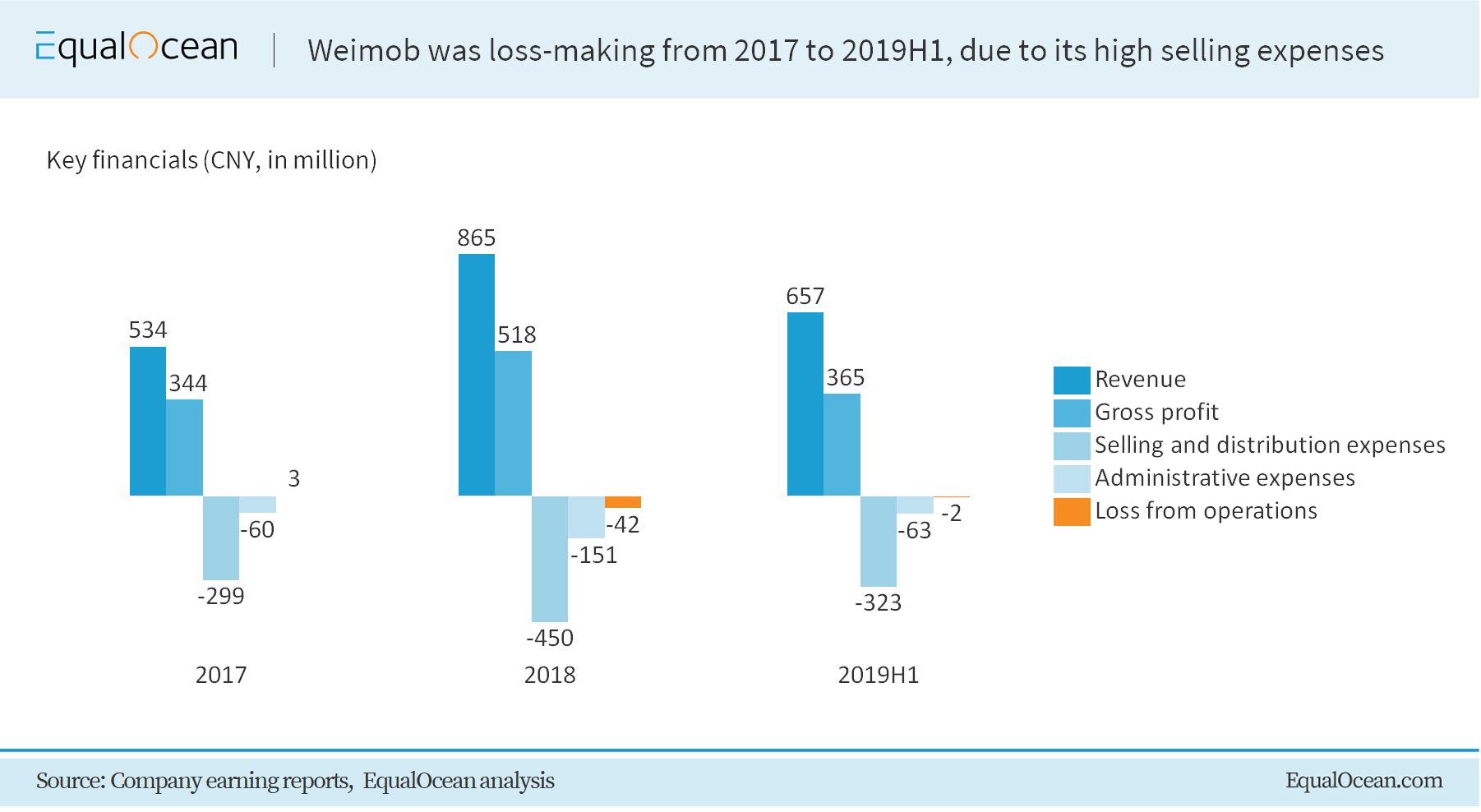 In 2017, the targeted marketing business generated CNY 270 million in revenue and surpassed SaaS products for the first time, representing 50.8% of total revenue.

Targeted marketing is usually more effective and considers more qualities of the consumer who views on advertisement than mass marketing. 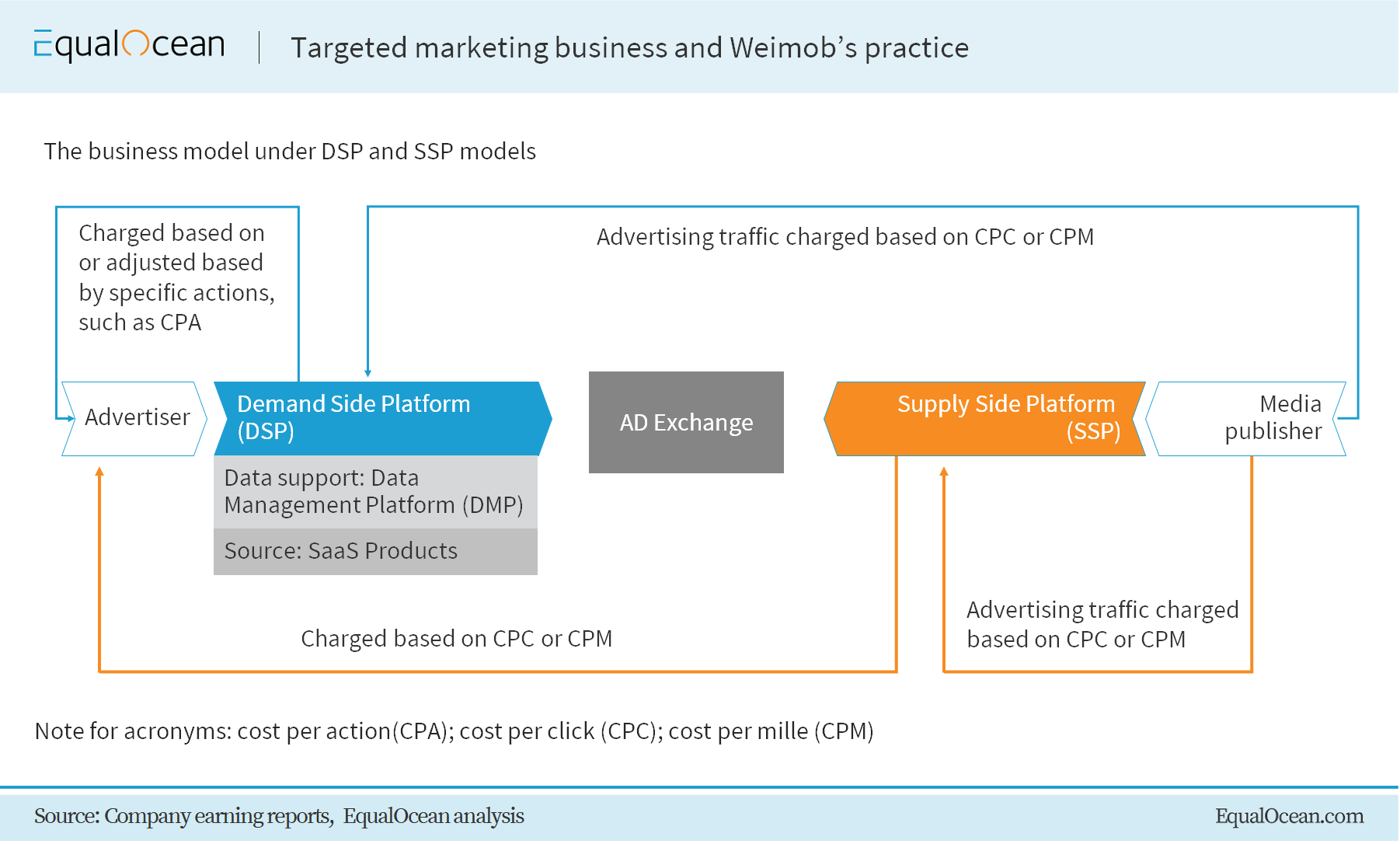 Acting under the DSP model, it's hard for enterprises to widen their moats

When Weimob acts as a DSP, it utilizes the data sets generated from its SaaS tools and stored in the Data Management Platform (DMP) to help marketers to make informed decisions and reach their target audiences online.

The company charges advertisers based on, or adjusted by specific actions such as click per action (CPA) and media publishers charge them based on cost per click (CPC) or cost per mille (CPM). The company recognizes revenue on a gross basis. Under the SSP model, Weimob earned CNY 176 million in revenue and spent CNY 155 million in cost of sales in 2017. The gross profit margin of the business was only 13.7%.

The data value of Weimob's SaaS products – which reach 3 million e-commerce customers – remains insignificant with such low margin numbers. Two Chinese marketing tech (martech) companies, BlueFocus (300058:SHE) and Jiguang Big Data (JG:NASDAQ), lingered between 10-15% margins as well. Baidu, Alibaba and Tencent have control over the value of traffic and have high bargaining power. Once they raise the price of traffic, the increasing value of data captured by these marketing services providers can be easily offset.

What makes Weimob successful is its SSP business

The company acts as a media publishers' agent and helps to optimize the sales of impressions, online publications and manage inventories. Weimob charges advertisers based on CPM or CPC, which is the same pricing mechanism that media publishers charge the company. The company recognizes revenue on a net basis. It received CNY 94.8 million revenue and CNY 94.3 million gross profit in 2017, with CNY 0.4 million costs of sales representing tax surcharges. The gross profit margin was 99.5%, much higher than that of the DSP business.

Thus, the total gross profit in targeted marketing reached CNY 115 million in 2017, representing a 12.3% net commission earned by the company. And we see a clear narrowing trend of commission in the past three years.

Traditional media publishers usually reap the profits of DSP by setting up a subsidiary. Tencent, however, outsourced the business to agents which are categorized into Key Account (KA) and Small and Medium Businesses (SMBs) by the social network giant itself. At the same time, to reduce competition between agents, Tencent has granted specific regional and industry licenses to specific agents.

The average gross billing per account saw a 65% increase from CNY 52,767 in 2017 to CNY 87,185 in 2018. With investors long being concerned about its reliance on Tencent, the key focus for Weimob is to seek out diverse media publishers like Toutiao and Douyin and tighten correlation with them.

To increase revenue from low-tier cities is also crucial as consumers there currently shows a more powerful growing momentum than tier-1 and tier-2 city consumers (aka consumption downgraded).

As the company adds more KAs and media publishers, forecasted gross billings from our model are expected to hit the CNY 5 billion-milestone in 2019.

The net commission will follow the historical trend, narrowing in the coming years. This is due to more KAs leading to fewer revenues. The larger customer base receives more rebates from media publishers, which will be included in the cost of sales.
We expect gross profit to be driven mainly by the SSP business and grow to CNY 1.6 billion in 2022, which will make up 48% of revenue.

This article is part I of our analysis on Weimob (02013:HK). Please continue to part II.